The last ROH PPV of the year, Final Battle takes oat the College Park Center in Arlington, Texas and it is the third Ring of Honor event under the ownership of Tony Khan.

As per usual, the card is absolutely stacked and features all of the promotion’s championships on the line. The full card is as follows:

Let’s look at what we think will go down at ROH Final Battle 2022.

One of AEW’s latest signings, Willow Nightingale takes on former GCW Women’s Champion, Trish Adora for the first-time-ever in ROH.

Prediction: Adora is definitely one to keep an eye on for the future but Nightingale has been featured heavily on AEW and pick up the win to continue her momentum.

The Kingdom vs. Top Flight

ROH stalwarts Matt Taven and Mike Bennet face one of AEW’s most exciting acts, Top Flight in what will undoubtedly be a cracker of a match.

Prediction: The Kingdom are highly decorated and experienced tag team but Top Flight are a young team that need to get some wins under their belt and here is a good place to start.

Jericho Appreciation Society’s Matt Menard and Angelo Parker will battle it out against Cheeseburger and Eli Isom on the Zero Hour Pre Show.

Prediction: As much as Cheeseburger and Eli Isom are fun team Angelo Parker and Matt Menard are getting the W here.

Prediction: Jeff Cobb is a former ROH World Television Champion with one hell of a move-set that will dispose of Máscara Dorada in what promises to be an excellent encounter. 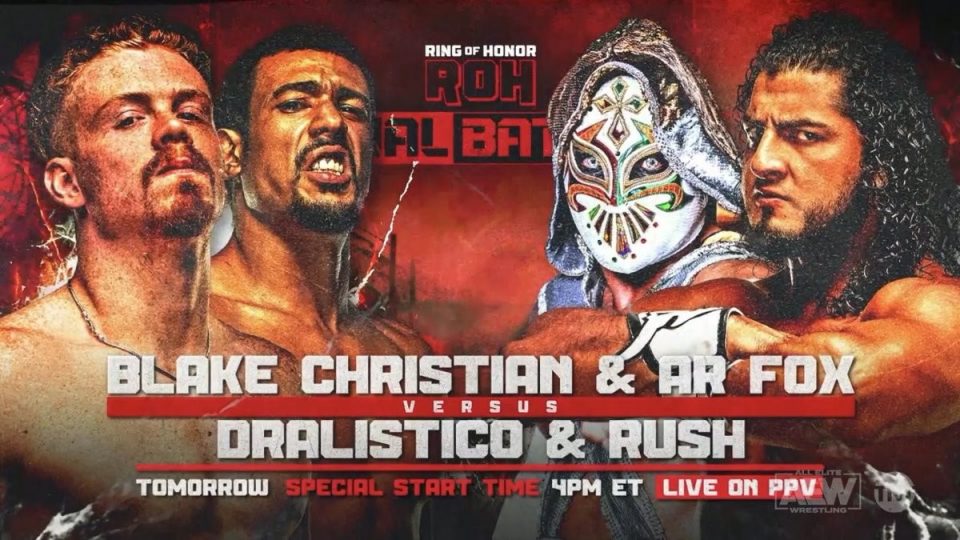 Blake Christian and recent AEW signee A.R. Fox team up to take on the intimidating duo of RUSH and Dralistico.

Prediction: Blake Christian and A.R. Fox make for one hell of an impressive tag team but the long-time crew of La Facción Ingobernable are more than capable of equalling their offence and claim the victory.

Swerve In Our Glory vs. Shane Taylor and JD Griffey 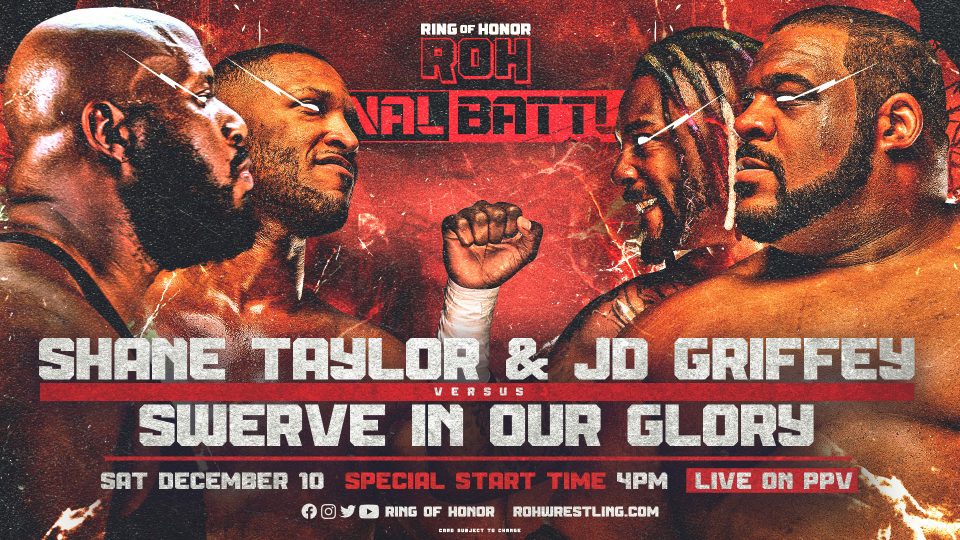 Former ROH World Television Champion Shane Taylor called out Keith Lee for repeatedly abandoning his tag team partners. Both Taylor and JD Griffey teamed with Lee in the past and suffered the same fate as Swerve Strickland when he also walked out on them. Now Lee must trust his most recent former partner, Strickland to take Taylor and Griffey.

Prediction: Due to Swerve Strickland walking out on Keith Lee, Shane Taylor and JD Griffey pick up the win. 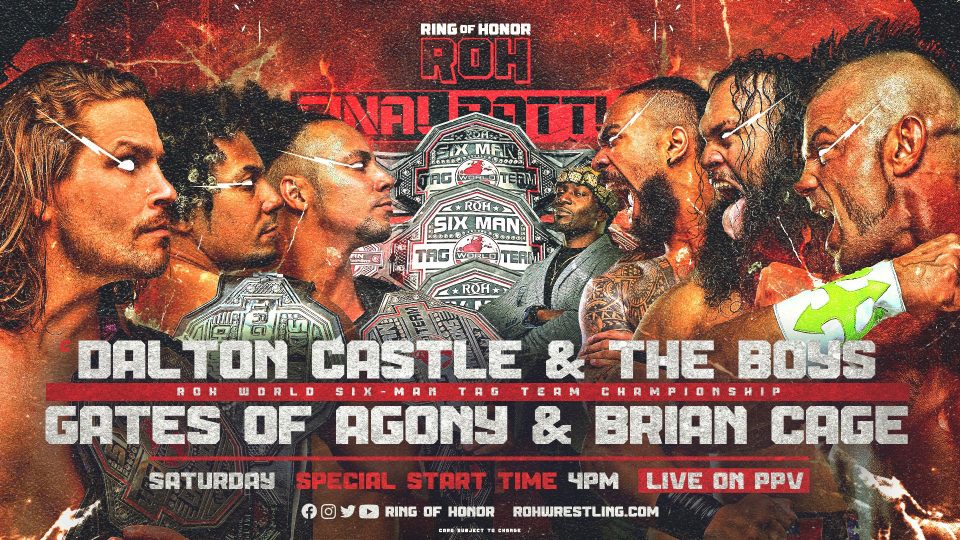 This match came about after Brian Cage eliminated Dalton Castle from the Dynamite Diamond Battle Royale, causing friction between them and their respective trios.

Prediction: The Embassy has been featured heavily across AEW programming as of late and will pick up the win and the titles at the PPV. 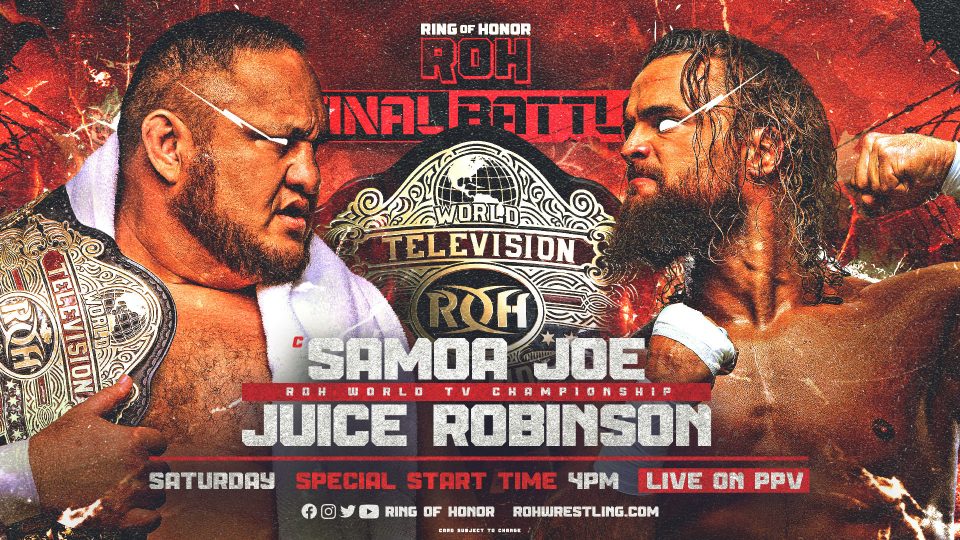 Samoa Joe puts the World TV Championship on the line against Juice Robinson. The former three-time IWPG United States Champion recently signed with AEW and declared he will prove himself in the US and begin by beating Samoa Joe.

Prediction: Juice Robinson is a fun and entertaining act and will make a great TV Champion. He will dethrone the self-proclaimed King of TV for the title at Final Battle. 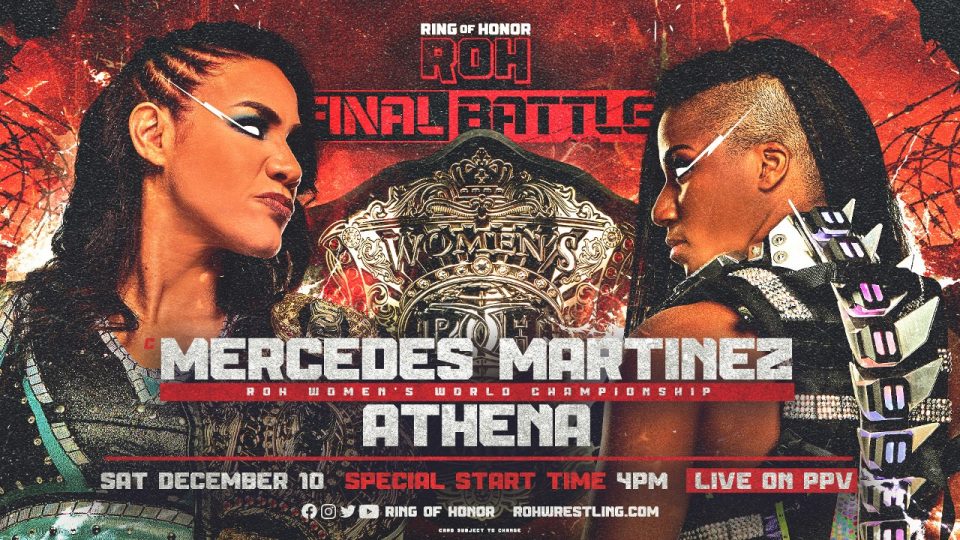 Athena completed her heel turn when she struck referee Aubrey Edwards. But before she could inflict any more damage ROH Women’s Champion, Mercedes Martinez made her surprise return to chase her away setting up a match between the two.

Prediction: Despite becoming the ROH Women’s Champion, Martinez’s post-WWE career has left much to be desired. The same thing can be said for Athena making this match a must-win for both. However, with Athena’s recent win streak and character shift, it seems a lot more plausible to put the title on her and try to elevate it heading into the new year. 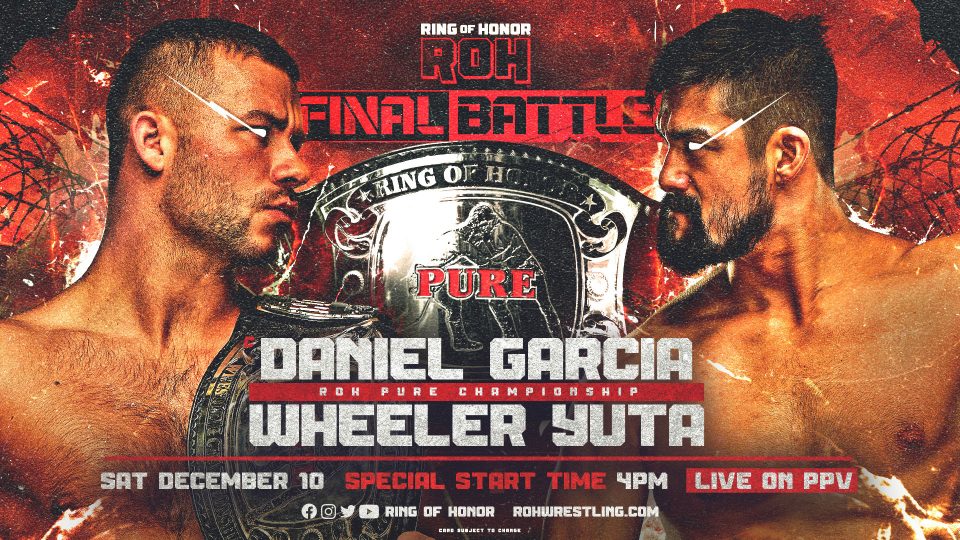 Wheeler Yuta and Daniel Garcia have been at each other’s throats for months on the opposing side of two warring factions and will fight for the title on the second consecutive ROH PPV.

Matches for the ROH Pure Championship are conducted under “Pure Wrestling Rules”, which are:

Prediction: AEW has invested a lot into these two young grapplers and is clearly setting them up as future stars. Expect to see a highly technical and lengthy bout between the two with Daniel Garcia remaining the champion. 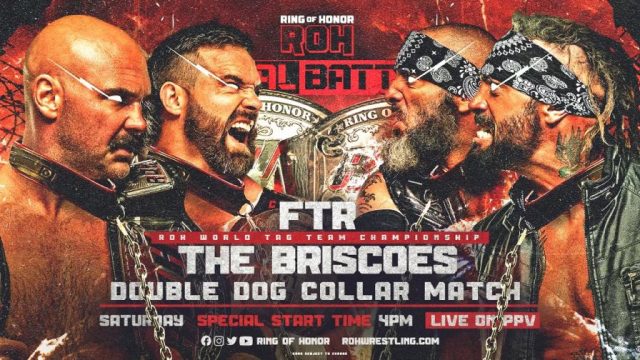 Two of wrestling’s best tag teams go head-to-head for ROH World Tag Team Championships for the third time. The teams have been in a long-running feud, which saw FTR capture the titles and then successfully defend them against the Briscoes in two show-stealing matches. For their third match, they have upped the ante and will clash in what will undoubtedly be a wild and bloody Dog Collar Match.

Prediction: With the Briscoes banned from TV its pretty safe to say that FTR will retain and continue to defend the belts on AEW and the seemingly elusive ROH TV show. 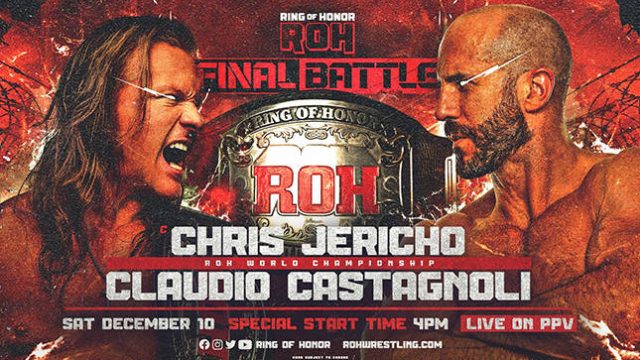 Since Chris Jericho won the ROH World Championship back in September, he has done everything to discredit and disrespect the title’s lineage. Claudio Castagnoli is so desperate to get it back that he accepted the stipulation of joining the Jericho Appreciation Society if he loses.

Prediction: Jericho has done more to elevate the ROH title in 3 months than the last 3 champions combined. It makes much more sense to keep the championship on him with a supposed TV deal happening in 2023. Plus it will be fun to see Castagnoli in the Jericho Appreciation Society for a short time at least.

ROH Final Battle is on Saturday, Dec 10 at 4:00 pm EST and is available via FITE TV and Bleacher Report