Ric Flair and robes, the two go hand in hand throughout his legendary career.

The news of Flair coming out of retirement to compete in one more match has set the wrestling world buzzing, with the 73 year old Nature Boy’s training videos, working alongside Jay Lethal showing that Slick Ric is taking it seriously in his quest to compete one last time.

The venue has already been changed for the event due to demand, with the Nashville Municipal Auditorium set to feature Flair’s last hurrah in the ring against an as yet unnamed opponent(s).

The kiss stealing, wheeling dealing, limousine riding, jet flying son of a gun is an icon of the sport, having had dozens of memorable matches and angles.

The man and the character are hard to separate. Ric has lived his life fast, on the edge of a lightning bolt, in full gear.

Flair’s larger than life persona and presentation are easy to see, brought to life by the infectious personality of the former sixteen time World Champion and complimented perfectly by the fantastic array of custom made robes, teamed with matching boots and trunks that Ric has worn throughout his career.

More than a dozen of Ric’s iconic robes were hand made by seamstress Olivia Walker, whose selective other clients included Greg ‘The Hammer’ Valentine, Dusty Rhodes, Madusa and Lex Luger. But it’s for Ric’s brilliant array of garments that she is best known, money being no object to The Nature Boy in the pursuit of standing a top of all the rest as the main man in the sport of wrestling.

His robes became the ultimate ring worn garment. He had to look the part, he was Ric Flair after all, he had his reputation to uphold.

Silver sequins, gold trims and exquisite Austrian rhinestones all feature across his robes, with every one heavily detailed throughout. One single robe is estimated to weigh as much as 45 pounds once complete and each cost between $2,000-$10,000 at least to make.

On the cusp of his final match, as he prepares to walk the aisle one last time, we take a look back at some of his most iconic robes, from his most important matches.

To be the man, you gotta beat the man. Wooooo! 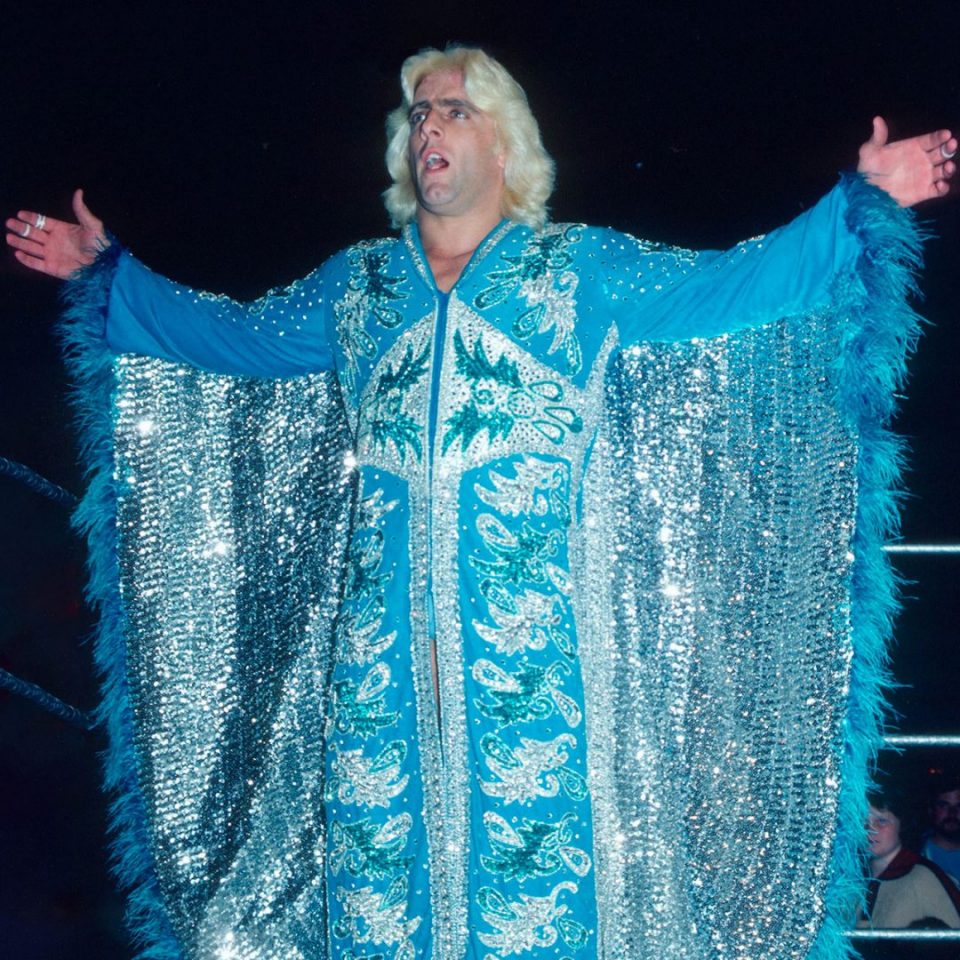 Before WrestleMania became the ‘granddaddy of them all’, NWA’s Starrcade once held that distinction. The inaugural event, 1983’s ‘A Flair for the Gold’, saw Ric challenge NWA World Heavyweight Champion Harley Race inside of a cage for the ten pounds of gold.

18,000 people jam packed the Greensboro Coliseum, in Greensboro, North Carolina on Thanksgiving night to witness history as Flair pinned Race in the cage to win his second world title. Arguably, this was the night that Ric Flair truly first became the man.

The robe he wore that night has become one of his most iconic. Carolina blue in colour, turquoise and covered in peacock feathers, silver sequins and approximately 7,000 rhinestones, the arms acting as wings as Ric lifts his fully lined cape aloft during his entrance, dazzling from the light show, pyrotechnics and smoke machine, all a rarity at the time.

The NWA spared no expense that night for their new champion, all adding to the legendary image and legacy of Flair.

The robe was also worn during Ric’s less famous first World Title Victory over Dusty Rhodes in Kansas City in 1981 and during his title feud with Kerry Von Erich in 1984, where Ric lost and then regained the title days later.

Found to be owned by private collector West Potter during WWE’s recent Most Wanted Treasures programme, the robe is still in fantastic condition, estimated to be worth at least $50,000. A true piece of legendary wrestling memorabilia. 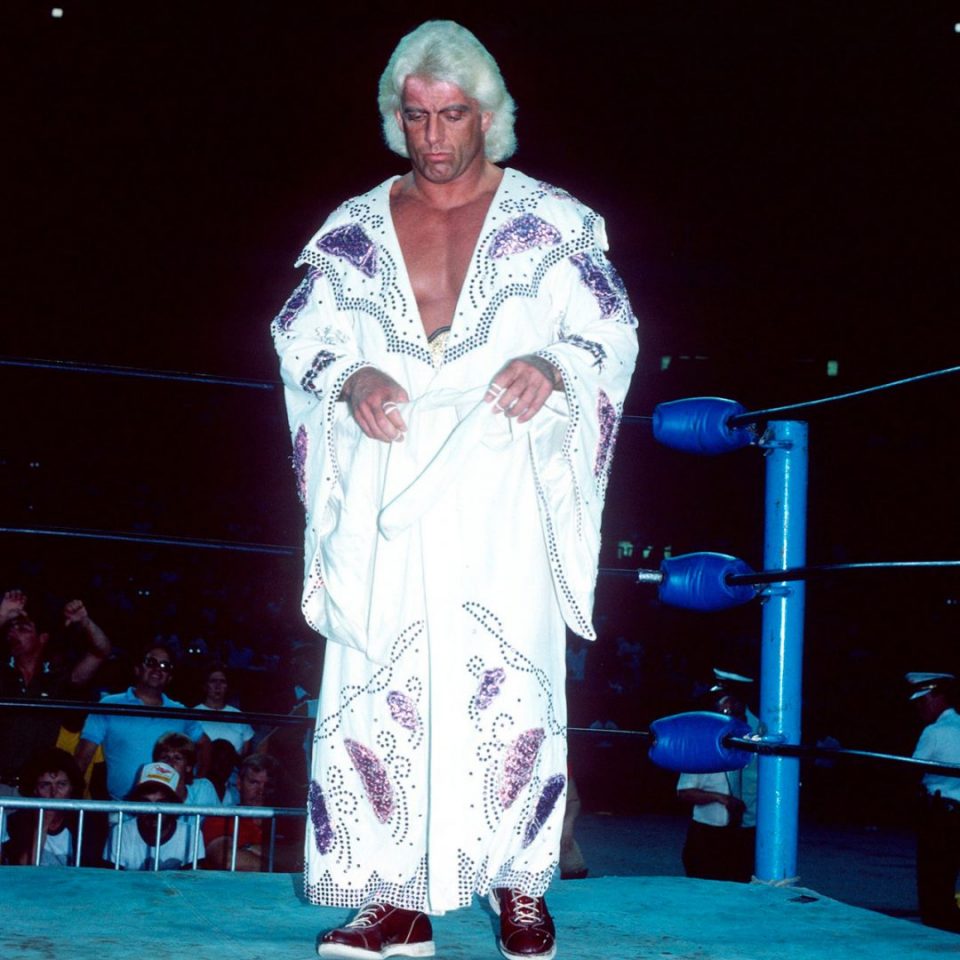 Worn during Ric’s defence of the NWA World Title against long-time rival Dusty Rhodes in Atlanta at 1985’s Starrcade ‘The Gathering’. After breaking Dusty’s ankle that past September, the much anticipated main event for Starrcade at The Omni was set.

That Thanksgiving around 30,000 were in attendance across the Atlanta and Greensboro venues as the event became the first to be expanded and held across two sites with matches being seen from the other arena across close circuit television.

Starrcade 1985 also featured the legendary ‘I Quit’ match between Magnum TA and Tully Blanchard for The United States Title.

After an epic battle, Ric would seemingly lose the match and the title in the process to Dusty. However, the decision was soon overturned.

Ric is at the height of his powers here and the white robe with purple sequinned butterflies adorning it, complete with oversized collar, classic deep purple ‘Nature Boy’ motif on the back with iconic purple trunks, knee pads, matching the robe with white boots.

This robe would feature throughout Flair’s run from 1984 through 1987, making several appearances at The Great American Bash 1986 and 1987 as well as an appearance at 1986’s CWF Battle of the Belts 3. That night ‘Natch’ went to a time limit draw with Lex Luger after being tied at one fall apiece, in the best two out of three falls contest.

The robe Ric will wear for his retirement match is based on this one. 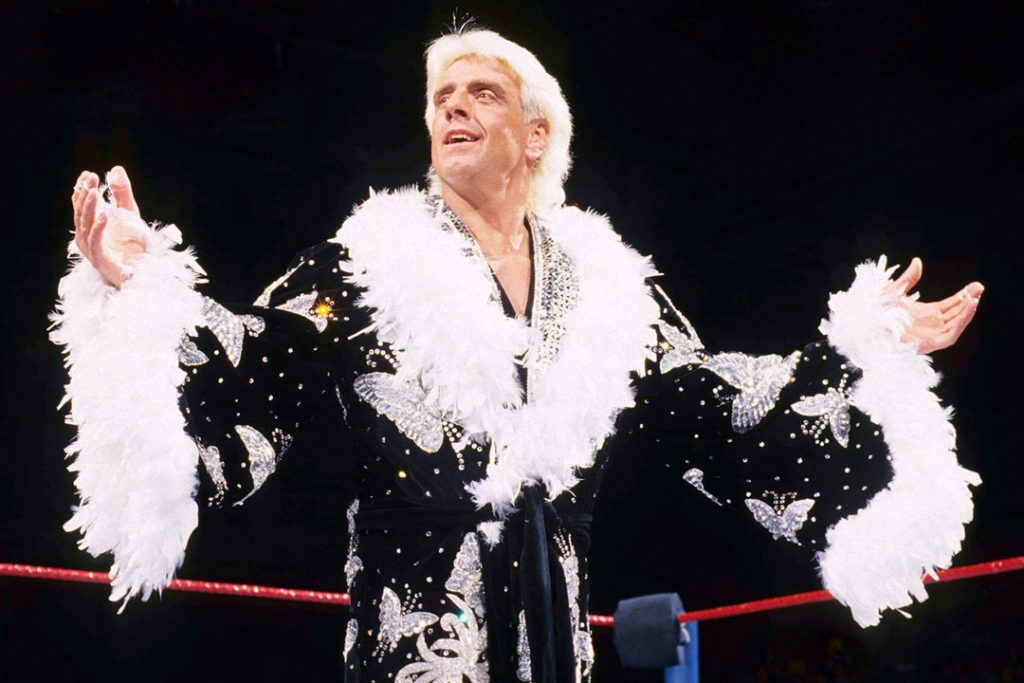 Outlasting twenty nine other men after drawing the number three slot, Ric Flair’s WWE career was made after winning the 1992 Royal Rumble just months after his WWE debut. Incidentally, Flair also wore this robe in that debut during September 1991 edition of Prime Time Wrestling.

Lasting one hour in the Rumble – a record at that time – Flair beat the top talent of the era in what is still arguably the greatest Royal Rumble match of all time.

From Hulk Hogan, Sid Justice, Roddy Piper and Jake Roberts, to an up and coming Shawn Michaels, Flair styled and profiled his way to victory, in a career defining performance.

With ‘a tear in his eye’, as he held aloft the WWE Championship, Ric Flair had truly arrived in the company.

The beautiful black velvet robe is adorned by several large sequinned silver butterflies and rhinestones throughout. It is complemented by large white feathers in a boa across the neckline and sleeves. It also had no bottom feathers for a while, but by 1994 the trim at the bottom of the robe had had them adorned on. Maybe the most iconic Nature Boy look of them all.

The robe would feature heavily during Ric’s initial WWE run, he would wear it again at the 1993 Royal Rumble as well. It would resurface along with Flair in WCW in 1994 and worn in his entrance to meet Vader in the Thunder Cage at Superbrawl IV, against Ricky ‘The Dragon’ Steamboat at Spring Stampede 1994 and against Hulk Hogan at that year’s Halloween Havoc.

After being stolen from a hotel following an early edition of WCW Monday Nitro, its whereabouts were unknown for many years. The robe was recently found during the WWE Most Wanted Treasures programme, it is now valued between $70,000 and $90,000. 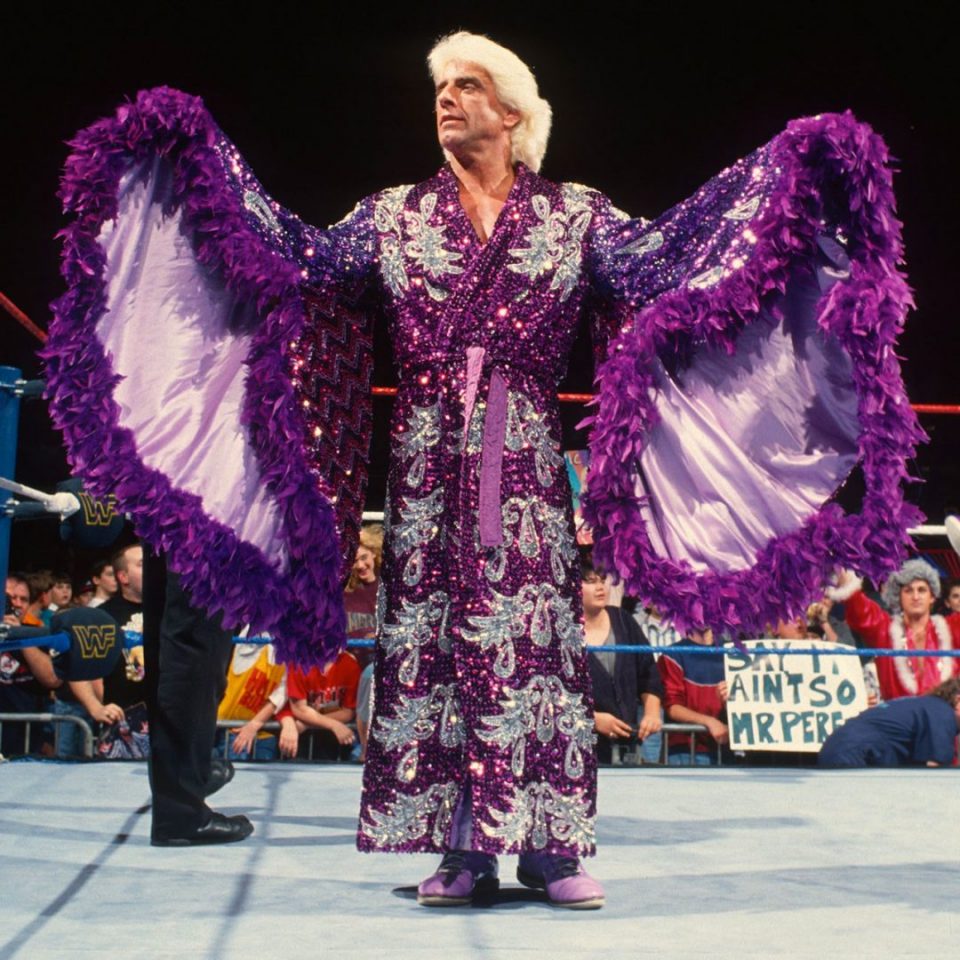 First appearing at The Great American Bash of 1989, this iconic piece of Ric Flair’s wardrobe would be ever present throughout much of the 1990’s and is one of Ric’s most long lasting robes as well as one he often turned to, to wear for his big matches.

Perhaps most famously worn at WCW Starrcade 1993’s ‘title versus career’ match against Vader, in a bout beautifully set up to show the emotional and family side of Flair, the man behind the Nature Boy.

Flair entered a top-tier performance, in a brutal encounter against the hard hitting and seemingly unbeatable WCW Champion. A trip and a roll up led to Ric winning his eleventh World Title and a return to the top of the wrestling mountain after many had questioned if his time had been and gone.

This robe was also worn by Ric in his first historic pay-per-view outing against Hulk Hogan at Bash at the Beach 1994, to win his second WWF Title from Macho Man Randy Savage in September 1992 and whilst teaming up with Razor Ramon in matching gear to face the Perfect Team of Savage and Mr. Perfect Curt Hennig at WWF Survivor Series 1992. The robe was even donned during Flair’s visit to North Korea in 1995 when he faced Antonio Onoki at Collision in Korea during the Pyongyang International Sports and Culture Festival of Peace.

A more fitted purple sequinned robe, with silver motifs it’s the spectacular sleeves that make this one, over-sized with zig zagged sequinned detail across both, with the large draping arms adorned with purple feathers, darker sequins and fully lined in deep purple to complement the overall look.

Mostly always paired with matching purple trunks, knee pads and boots, this is a look that epitomises Flair’s allure and demeanour. 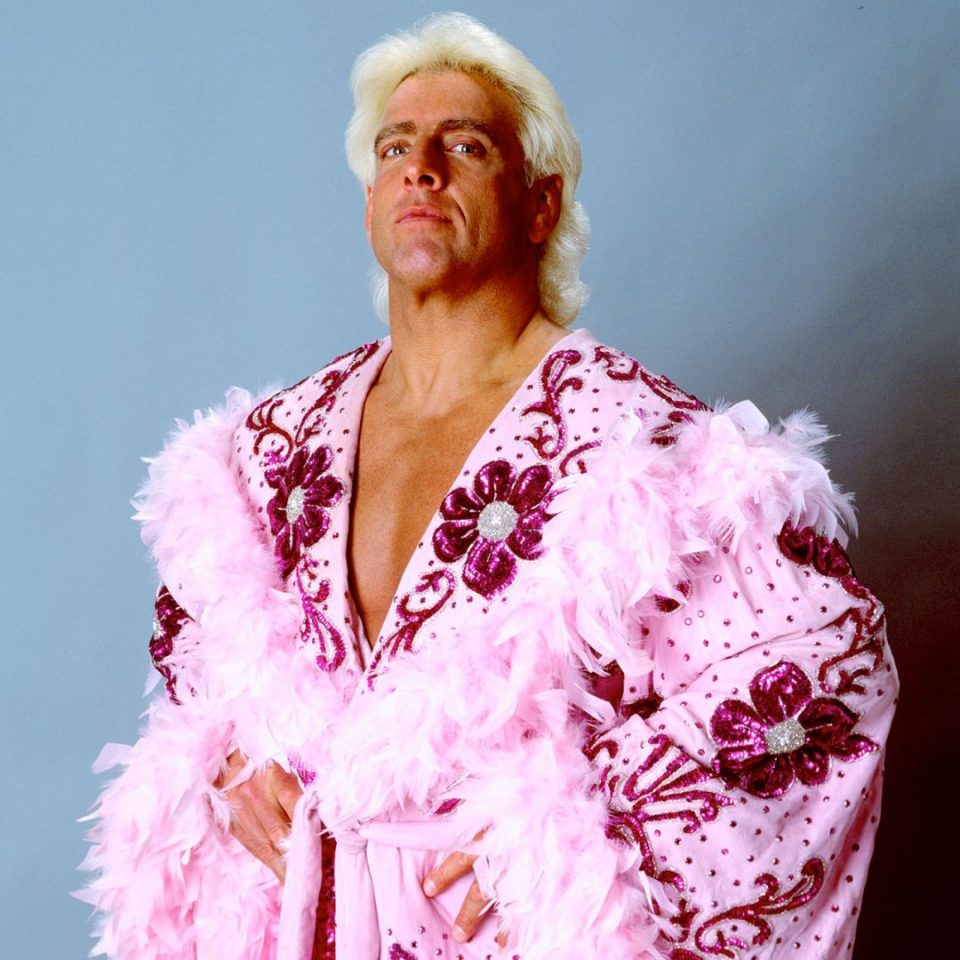 Flair wore at least four different pink robes during his career, but this was the most long standing and arguably the best of them. This bright pink addition with flowers and laurel patterning was used by Ric from 1988 and appeared on an edition of Raw as late on as 2008.

Perhaps most famously worn during his comeback match from shoulder surgery at WCW Slamboree in May 1997, once again in his hometown of Charlotte, North Carolina, Ric teamed with long-time friend and rival Rowdy Roddy Piper and NFL Hall of Famer Kevin Greene to take on the dastardly trio of the nWo’s Wolfpack – Kevin Nash, Scott Hall and Syxx.

A fun match with a fully invested crowd, the face team got a rare victory over the New World Order, which made the match even more memorable. It was Flair’s first match of 1997, styling and profiling his team to victory as only he can in front of his adoring public.

This robe also made an appearance at his WrestleWar match against Lex Luger on February 25th 1990, originally the date set for him to relinquish the gold to Sting, who was injured just weeks before.

The robe made back to back WCW Bash at The Beach appearances in 1995 and 1996, when Ric faced Randy Savage in ‘95 and won the US Title from Konan in ‘96 and made a WWE pay-per-view appearance at Vengeance Night of Champions when Ric faced MVP in 2007.

Similar in style to Ric’s Purple robe, but featuring a more exonerated feathered neckline and sleeves.