There are masses of weird and wonderful wrestling merchandise in 2022. Most beloved of all are wrestling action figures. For the WWF, their first action figure deal occurred way back in 1990 when they signed a toy deal with the company Hasbro and a long running, hugely successful and profitable relationship began.

There were 11 series of Hasbro figures, from 1990 to 1994 featuring all of the biggest stars of the era.

Over 30 years after the toy line debuted and these figures, particularly those that are MOC (mint on card) can fetch a pretty penny through the third party seller market.

Many of these figures are quite common and relatively easy to pick up. However, a select few are extremely rare and very difficult to track down and obtain. Even if you do manage to locate one, chances are you would need to part with thousands of pounds to add it to your collection!

This feature looks at the five rarest WWF Hasbro figures in the world today. 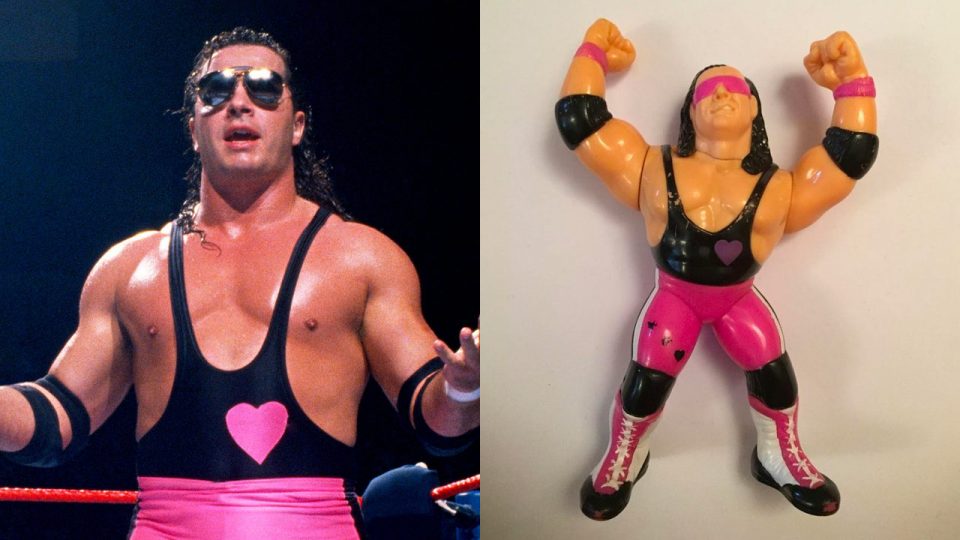 In the early 1990s, WWF Magazine afforded fans the opportunity to mail order exclusive Hasbro action figures. Three decades later and these variants are among the rarest and most difficult to track down for collectors.

The Bret ‘Hitman’ Hart purple heart variation is very similar to the series 4 carded pink heart figure, with the obvious difference being the colour of the heart on Hart’s ring attire.

The purple heart variation is scarce but the least desirable to collectors of the three mailaway figures that were available to fans of the era, due to it being almost identical to the 1992 carded figure.

There were also carded versions of this attire distributed as a series 4 variant, which are impossible to tell apart. That being said, the mailaway figure still fetches a fair sum on the third party seller market. 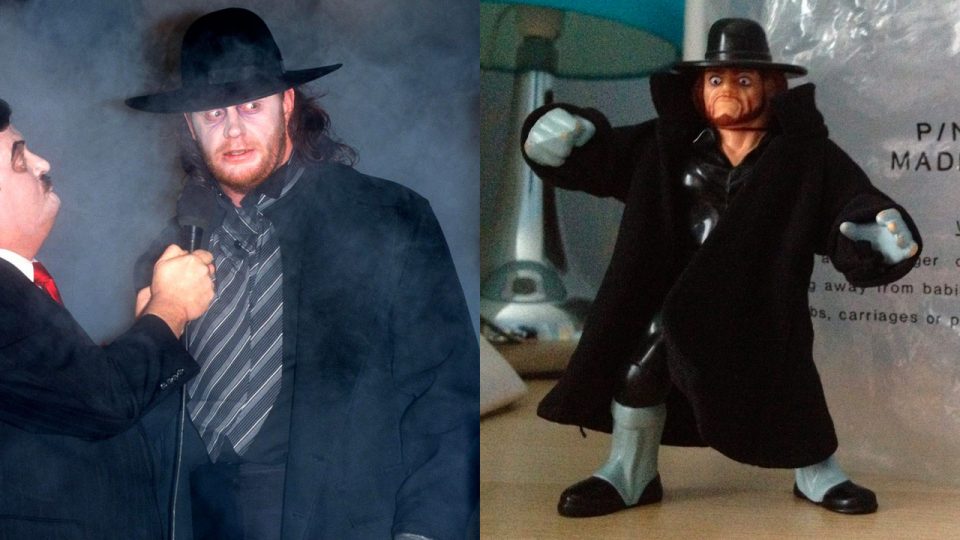 The Undertaker mailaway is strikingly similar to the series 8 red card figure. However, the mailaway has lighter brown hair and no eyeshadow under the eyelids. It also has a slightly different head sculpt.

However, due to it’s scarcity, it is a highly coveted figure nonetheless, despite it’s similarity to the series 8 variation.

A MOC mailaway ‘Taker is likely to set you back around £1,600 and is highly desirable to collectors in 2022. 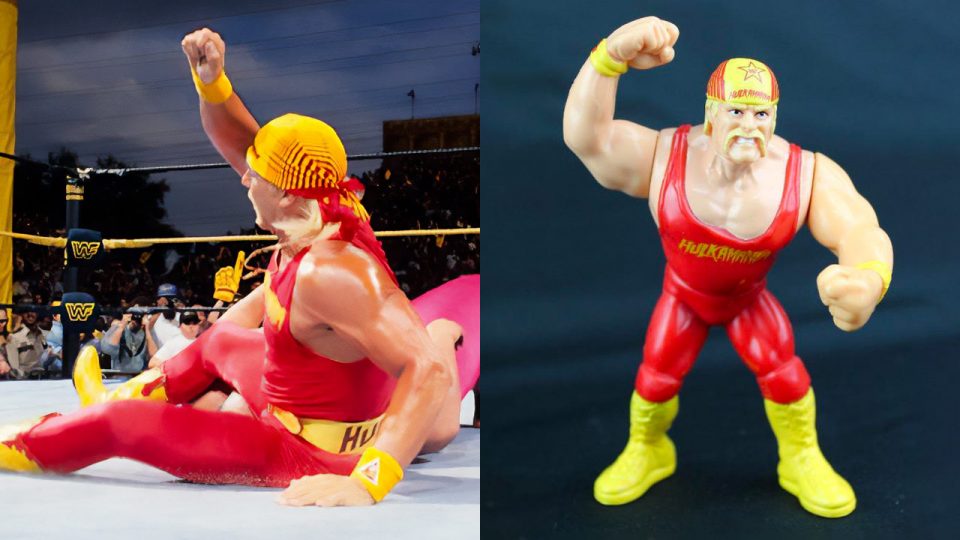 The third mailaway figure was a Hulk Hogan variant. The mailaway had red non-wrestling attire, most famously sported by ‘The Hulkster’ at WrestleMania IX.

This figure was unique amongst the mailaways in that Hogan’s attire was completely different from any of the carded Hasbro ‘Hulkster’ figures, which all featured Hogan in variations of his traditional yellow wrestling gear.

The mailaway is the rarest of the five Hogan Hasbro action figures and costs a pretty penny on the third party seller market in 2022. 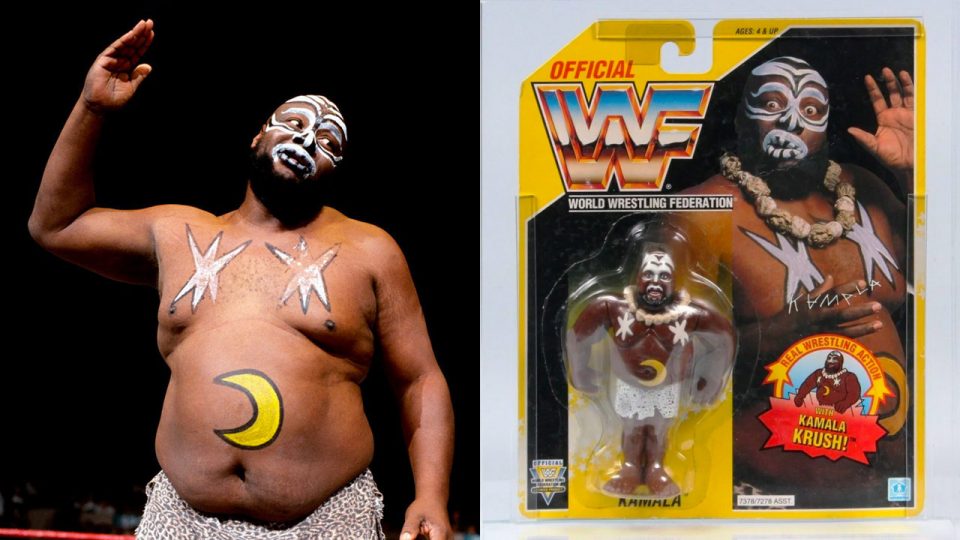 A Kamala figure was released as part of the yellow carded series 11 and is not too difficult a figure to track down today.

However, the vast majority of these figures feature a star on Kamala’s belly rather than the moon, which was more commonly associated with the Ugandan giant in his prime. A small number of figures were released with a moon featured on his belly, but this variant is astonishingly scarce.

In fact there are reportedly only 24 of these figures in existence. Very few likely remain MOC. To purchase one of these figures would cost between £10,000 and £20,000! This makes the Kamala moon belly figure one of the rarest and most valuable of all WWF Hasbro action figures. 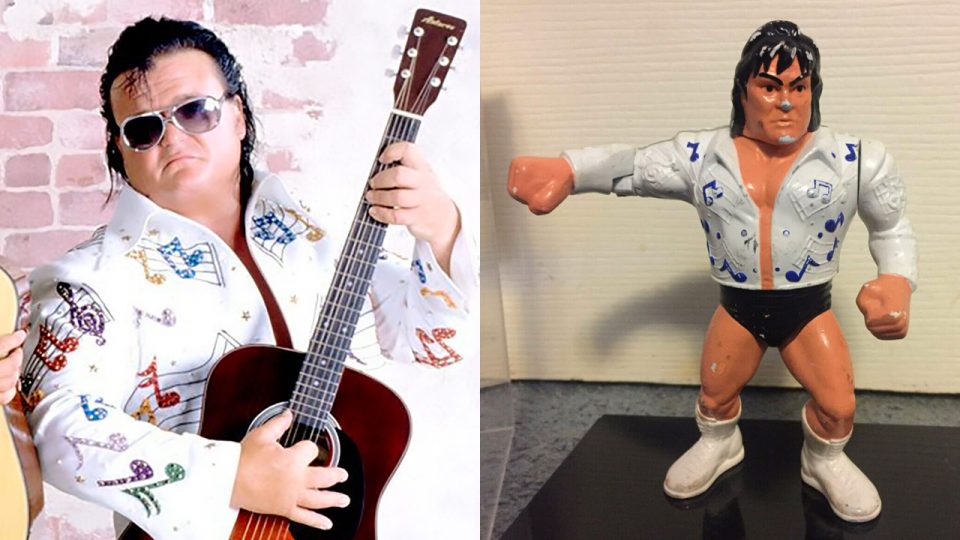 The Kamala moon on his belly variant was considered to be the rarest Hasbro figure of them all for many years, until the discovery that an unreleased prototype of Greg ‘The Hammer’ Valentine existed.

Valentine in his traditional attire of black trunks and yellow boots was released as part of series 3. However, there were Toys R Us adverts in WWF Magazine in March 1991 that featured Valentine in his ‘Rhythm and Blues’ attire from 1990-91. However, this was never released and no physical figure was known to exist for decades.

However, in 2013, the first of three prototype figures surfaced on eBay and was sold for $12,600. A second, damaged figure was purchased by former WWE wrestler and known wrestling figure aficionado, Matt Cardona for $8,000. The last known Valentine prototype was discovered in the loft of a former Hasbro employee and was also bought by Cardona as part of a job lot for $43,000.

With only three of these figures known to exist and each having sold for eye watering sums, the Rhythm and Blues Valentine prototype is unquestionably the rarest of all Hasbro’s and the true holy grail for collectors.