NXT celebrates the scary season with its third edition of Halloween Havoc on Saturday, October 22 at the WWE Performance Center in Orlando, Florida.

The show features a scarily good card and to make it even spookier it will be hosted by the returning horror aficionado herself Shotzi.

Here are our predictions for NXT Halloween Havoc. 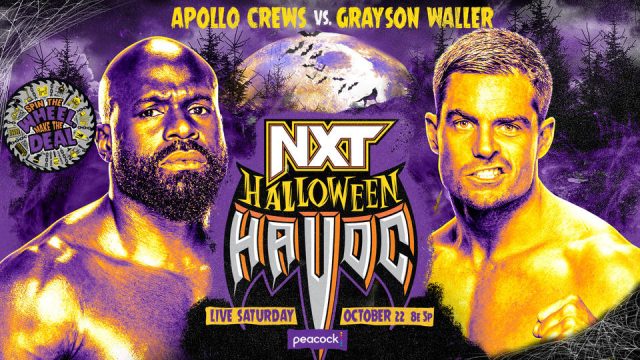 Crews and Waller have been going at it for months and will finally settle their beef at Halloween Havoc. The former Intercontinental Champion returned to NXT to teach the brash up-and-comer a lesson but Waller has proved to be more than capable of holding his own and even attempted to blind Crews in a villainous move.

Since then Crews has been out for revenge and recently cost him his NXT North American Championship Ladder Match qualifying match against Oro Mensah. Their feud elevated when the match and its stipulation were revealed by non-other than everyone’s favourite murder doll Chucky.

Prediction: Crews returned to NXT to his career back on track. He is having good matches and developing a decent character. But the arrogant Aussie is one of NXT’s brightest stars and has a big future ahead of him. Expect to see Waller’s hand raised in victory. 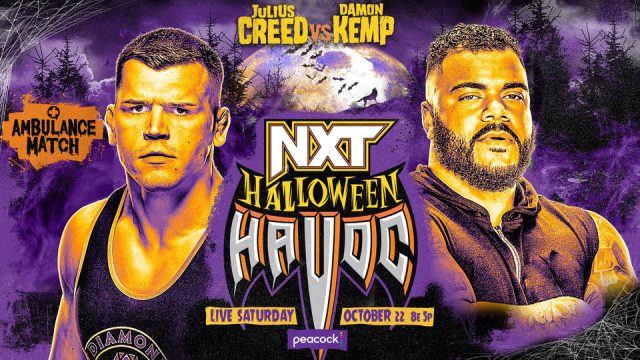 At World’s Collide Kemp began to dismantle the Diamond Mine when he attacked Roderick Strong in wrestling’s most dangerous area – the NXT parking lot. He then went on to turn on the Creed Brothers with a steel chair costing them a shot at the NXT Tag Team Championships.

Kemp continued to target the brothers and handcuffed his Halloween Havoc opponent to the steel cage costing them yet another chance at tag titles. This leads them to clash at the show in an Ambulance Match with Julius’ brother, Brutus’ career on the line.

Prediction: The two young athletes both have collegiate wrestling backgrounds but that none of that matters in a match when weapons and ambulances are involved. Kemp and Creed are two of NXT’s rising stars so picking the winner is tricky, but Creed is out for revenge and his brother’s career is on the line. However, if we get to see an “Et tu, Brute?” that would be awesome. So let’s go with Julius losing due to his brother’s betrayal. 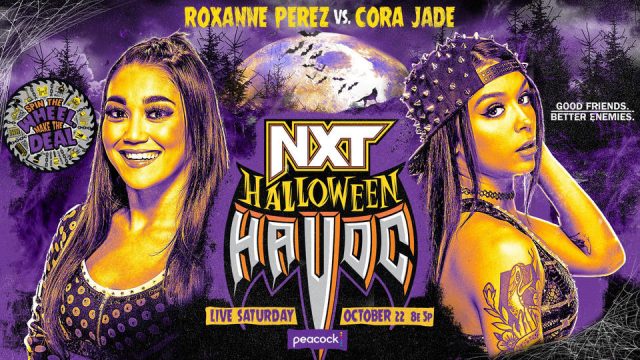 After falling victim to Cora Jade’s vicious attack during her NXT Women’s Championship challenge against Mandy Rose Roxanne Perez is out for revenge. The former NXT Women’s Tag Team Champions clashed at NXT Heatwave but the match only exasperated their rivalry as Jade used her trusty Kendo stick to defeat Perez.

The two young starlets remained on their collision course and get the chance exact maximum payback/punishment in a match that will well and truly put an end to their heated feud.

Prediction: This will be an interesting fight as both wrestlers are on a clear path to superstardom. Jade is revelling in her new darker heel role. It has given her an edge and purpose while Perez is a hugely likeable babyface and has the full support of the fans in her fight for revenge. Therefore, we will get to see Perez get some vengeance against her former friend. 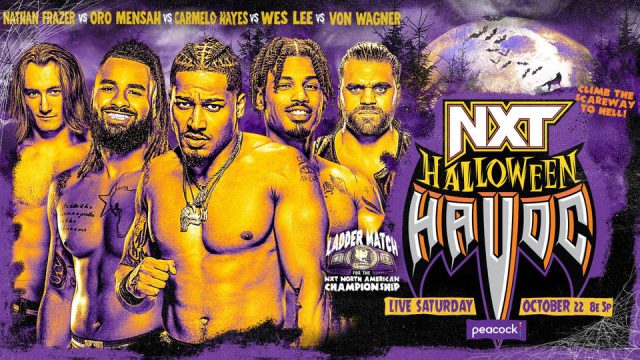 The vacant North American Championship hangs above the ring with a collection of NXT’s most exciting superstars fighting it out for the chance to climb the ladder and grab the gold.

The match came about after Solo Sikoa defeated Carmelo Hayes for the title but was then forced to relinquish it the following week. Hayes received a guaranteed spot in the ladder match while all the others had to qualify. The inclusion of the high-flying daredevil antics of Hayes, Wes Lee and Nathan Frazier alone makes this match a must-see.

Prediction: Hayes has main roster superstardom written all over him and this outing could be his swansong. Frazier and Mensha are too early in their careers and Von Wagner seems like a lost cause leaving Lee as the favourite to become the new North American Champion. 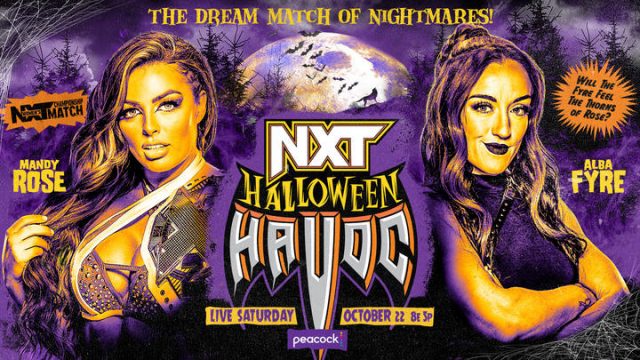 With the help of Gigi Dolin and Jacey Jayne, Mandy Rose has owned the NXT women’s division. Since winning the women’s title Rose has defeated all who have crossed her path including Alba Fyre on two different occasions.

However, determined to get another shot at the title, the former Kay Lee Ray, kidnapped the champion and forced her way back into title contention. Despite being a successful venture, payback awaited her in the form of Rose’s former running buddy Sonya Deville attacking the challenger before smashing her through the announce table.

Prediction: Since becoming Alba Fyre, the British star has become a fiercer version of herself and therefore brings a new challenge to Rose’s championship reign. As champ Rose has been on the run of her career and seems to be held in high regard by those in charge. Her push reinvented her character and has been one of the better acts on the brand therefore her 350+ day title reign continues with a victory at Halloween Havoc. 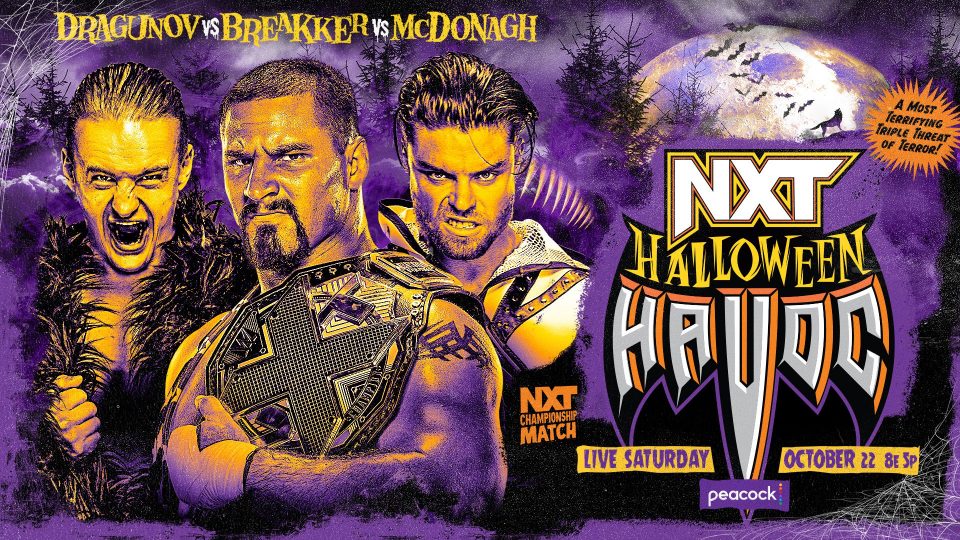 Bron Breakker faces the toughest challenge of his second NXT Championship run as comes up against the psychotic JD McDonagh and the intense Ilja Dragunov.

Dragunov recently returned to action after relinquishing the NXT UK Championship due to an injury and quickly inserted himself into the main event by confronting the NXT champion. McDonagh had a similar insertion into the championship scene but has already fallen at the hands of Breakker. Now, both former NXT UK superstars take on the NXT powerhouse for the opportunity for gold.

In the lead-up to the match, Mr Money in the Bank Austin Theory made a surprise appearance holding up his briefcase to Dragunov. Could Theory cash in on the show and shake things up?

Prediction: Dragunov is one intimidating dude. His intensity is unmatched and his wrestling ability is unrivalled but it doesn’t seem like the right time for him to win the title.

Breakker is a solid champion who has come a long way in such a short space of time. But Austin Theory circling around puts his title reign in jeopardy. For Theory to cash in against Breakker would be a major talking point and further solidify the unification between NXT and the main roster. So expect to see Breakker retain but Theory to claim the title via the Money in the Bank contract.