As has been proven with the grand reception given to NXT’s thus far six incarnations of the famed “Match Beyond”, War Games – now known in WWE as WarGames – remains a popular match stipulation some twenty-odd years on from its original outing as part of the National Wrestling Alliance’s (later World Championship Wrestling) Great American Bash tour in 1987.

Originated through Dusty Rhodes’ viewing of Mad Max Beyond Thunderdome, the War Games stipulation began essentially as a speciality bout for the members of the famed faction, The Four Horsemen. Members of the now-WWE Hall of Fame group regularly entered the contest, often against babyface foes such as Sting, The Road Warriors, and Rhodes himself, before, under the WCW banner, it became a staple of the annual September pay-per-view, Fall Brawl.

The multi-cage concept proved so popular, in fact, that once The Four Horsemen, Sting, The nWo, and countless others had left their mark inside the structure in WCW, numerous other promotions would begin utilising their own variation of the War Games stipulation. Ring Of Honor’s Steel Cage Warfare, IMPACT Wrestling’s Lethal Lockdown, and Combat Zone Wrestling’s Cage of Death all took inspiration from the creative mind of Dusty Rhodes in creating their own inhumane confines.

More recently, All Elite Wrestling have based their Blood & Guts match on War Games, doing the stipulation justice with the acclaimed, albeit a tad controversial, Inner Circle vs. Pinnacle fight in early May.

A plethora of other notable promotions can add their names to this list, too, the most recent of which did so just under three months ago… 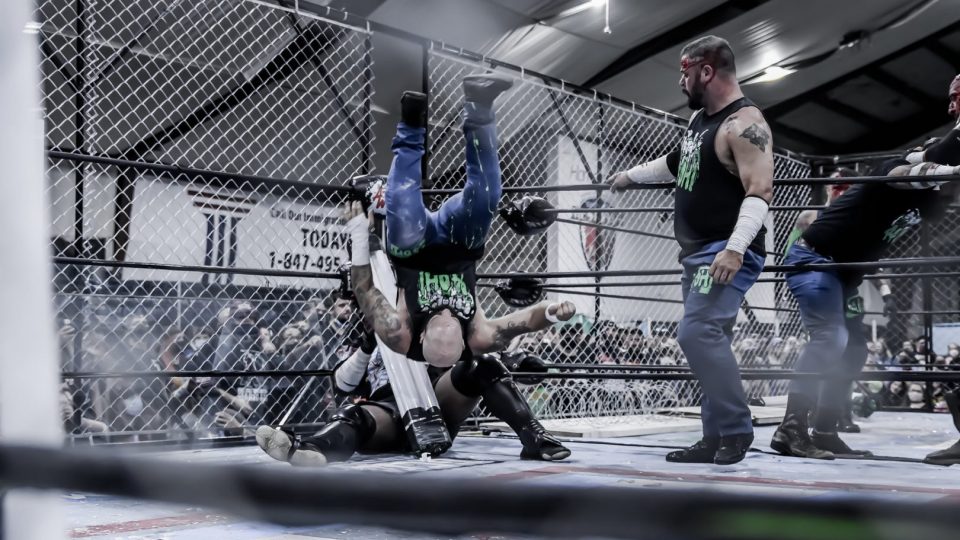 Yes, Game Changer Wrestling, a promotion synonymous with invisible men, Clusterf**k Battle Royals, and insanely weird matches you didn’t know you needed in your life (see: Ricky Morton vs. Joey Janela), has used the War Games stipulation in recent months, doing so over All Out 2021 weekend at the aptly-titled event, The Art of War Games.

The match pitted Nick Gage’s Team MDK, comprised of Gage himself, AJ Gray, Alex Colon, EFFY, Matthew Justice, and Mance Warner against the villainous 44OH! faction, consisting of Rickey Shane Page, Atticus Cogar, Bobby Beverly, Eddy Only, Eric Ryan, and Gregory Iron. On name value alone, the War Games stipulation was in safe hands. It had a different feel to it, too.

As is tradition, there were two rings with a cage surrounding the entire area, but at ringside stood a scaffolding. That it was placed there meant a risky spot(s) would be attempted during the match, the most dangerous of which came in the form of a Spanish Fly from atop the scaffolding, back into the cage. It was pulled off flawlessly.

Team MDK would win here, with Gage, almost poetically, pinning RSP after a Chokebreaker. The visual of him laying across Page, while the remaining members of his gang were atop the surrounding turnbuckles and scaffolding is an iconic image from a promotion that continues to make history. 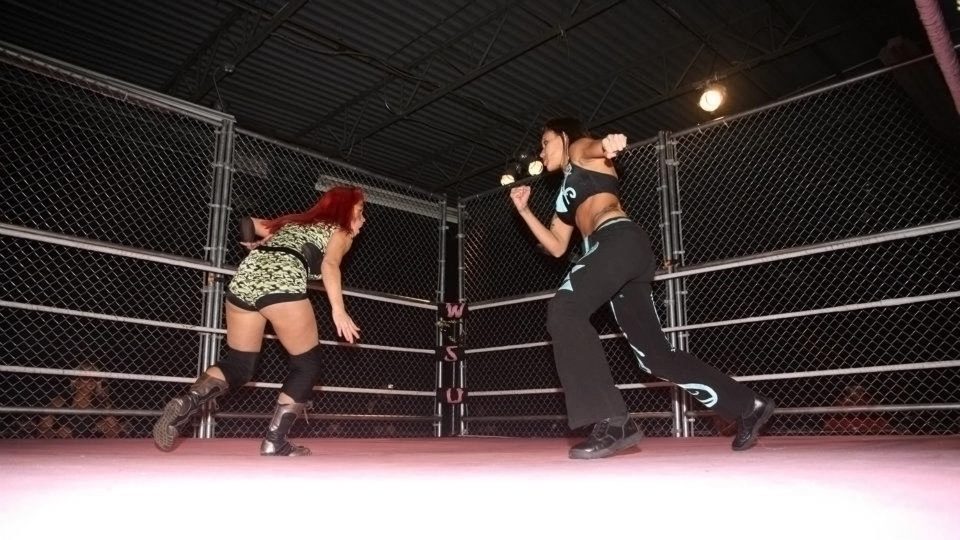 Unless you’re a diehard fan of the independent scene, then Women Superstars Uncensored – renamed to Women’s Superstars United in 2019 – is perhaps a delve into the unknown for you, but their inclusion here is justified. They made history in 2011, as they promoted the first War Games match to feature women, doing so at their 19 November Internet-pay-per-view, Breaking Barriers II.

This saw a trio representing WSU, consisting of Mercedes Martinez, Alicia, and Brittney Savage, going against The Midwest Militia; this group comprised Jessicka Havok, Allysin Kay, and Sassy Stephie. Technically speaking, this match was far different to your traditional War Games match, as there was only a single ring within the cage as opposed to the usual dual rings, though the remainder of the rules were, by and large, the same, with Amy Lee acting as the guest referee for the bout.

The match wasn’t anything too special, particularly in comparison to the aforementioned GCW War Games match that was utter anarchy from bell to bell, but still, WSU deserves the credit for progressing the War Games stipulation some eight years before WWE ever did it with Rhea Ripley‘s team going against Shayna Baszler’s team at NXT TakeOver: War Games in 2019.

The ending of the bout had a very WCW feel to it, also, with Brittney Savage offering a verbal give up as Mercedes Martinez was threatened with a machete. It was odd, though it certainly gave the match that feeling of it being a blood feud. This was needed, given that the story was Jessicka Havok eyeing up Martinez’s WSU World Championship. 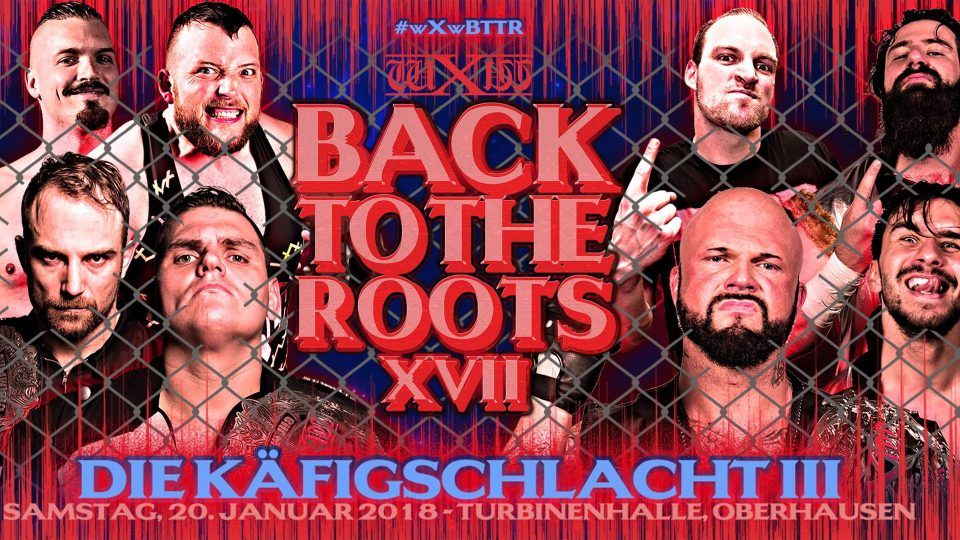 Germany’s westside Xtreme wrestling technically haven’t held a War Games match, but they have promoted five Cagefights that were, essentially, “Matches Beyond”.

The first was at January 2016’s Back To The Roots XV, featuring Cerberus’ Ilja Dragunov, Julian Nero, and Robert Dreissker taming the trio of Big Daddy WALTER and Hot & Spicy, the pairing of Axel Dieter Jr. and Da Mack, while the most recent outing was three years thereafter at the eighteenth Back To The Roots show. There, Absolute Andy retained the Unified World Wrestling Championship against Dragunov, and the RISE faction of Ivan Kiev, Lucky Kid, and Pete Bouncer lifted both the Shotgun Championship (from Marius Al-Ani) and the World Tag Team Championships (from Da Mack and Tarkan Aslan).

Perhaps the most notable of these, however, came between those; Back To The Roots XVII in January 2018.

Set up as Monster Consulting’s Avalanche and Julian Nero, and Ringkampf’s WALTER and Timothy Thatcher against the RISE faction of Ivan Kiev, John “Bad Bones” Klinger, Lucky Kid, and Tarkan Aslan, the match descended into chaos once all eight had entered, with crimson masks adorned on faces, chains, chairs, and kendo sticks getting involved, and a WALTER-involved Doomsday Device, which covered your ‘that shouldn’t be possible’ move of the night. It was a hoot, seriously.

Klinger ultimately succumbed to WALTER’s Gojira Clutch, all while an intervening Pete Bouncer was swiftly held back from further interference in the bout. The structure of the match really held the match back from being what it could have been, with a rather standard affair turning abundantly chaotic almost as soon as everyone entered the cage. This wasn’t a natural transition, and so held the match back from what it really could have achieved, but aside from this, wXw’s take on War Games have traditionally gone down as treats.

Much like westside Xtreme wrestling, Major League Wrestling has produced more than one War Games match, hosting one in 2003 and one in 2018, while their War Chamber match is effectively a War Games spinoff.

The 2003 bout is more noteworthy, simply based on the names involved. The Funkin’ Army, which was a Terry Funk-led group consisting of the WWE Hall of Famer, The Sandman, Steve Williams, Sabu, and Bill Alfonso, squared off with The Extreme Horsemen, which hosted Steve Corino, Simon Diamond, CW Anderson, PJ Walker (better known as Justin Credible), and Barry Windham as its members.

In this case, War Games was a justified stipulation. The Extreme Horsemen had been running rampant through MLW with both the World Heavyweight and World Tag Team Championships in their possession, in the same vein as The Four Horsemen running through the National Wrestling Alliance.

What was cool is that MLW’s initial War Games match followed WCW’s rules to a tee. There were two rings within the steel cage, staggered intervals, finishes by submission only, et al. It was a real throwback, which was necessary given WCW had only followed two and a half years prior. The memory of the War Games of old was still fresh in wrestling fans’ minds.

The match, particularly its ending in a way, had that feel-good, house show vibe to it. The heel Horsemen quintet had dominated the majority of the bout, but ultimately, The Funkin’ Army fought back against the adversity, complete with Funk’s flaming branding iron and all. Needless to say, Terry Funk won the match for his team, submitting Steve Corino with his famous spinning toe hold. It felt a tad unnecessary, given that “The King of Old School” had just had a fireball blasted in his face, but a win nonetheless for Funk and co.

A caveat must be mentioned before moving on with this entry. Pro Wrestling: EVE is often credited with promoting the second all-female War Games match, and certainly the first to do so in England, but this isn’t quite true. Bellatrix Female Warriors beat them to it by two months, promoting the team of Arianna, Bacardi, Destiny, Liberty, and Shax against Chanel, Erin Angel, Lady Lory, Sammi Baynz, and Violet O’Hara in March 2016.

EVE’s is, however, the more critically acclaimed of the two, given that it aired via Internet-pay-per-view, and went down on EVE’s biggest show of the year, Wrestle Queendom. It was the inaugural Wrestle Queendom, too, so they had to go all out.

Kicking off the night’s proceedings, it would be Squad Goals – Addy Starr, Emi Sakura, Laura Di Matteo, and Rhia O’Reilly – besting The Deserving – Blue Nikita, Charli Evans, Jamie Hayter, and Jayla Dark – after an intense twenty-one-minute fight. There was a different feeling to this, not only in its single ring usage, but in that the two quartets had their members surrounding the ring prior to their entry, as opposed to entering from the stage as and when their time slot allowed. It made the match feel more personal, which all War Games matches already should be.

The finishing sequence, with all four members of The Deserving trapped in simultaneous Camel Clutches, was an apt ending to a match that had previously relied on a load of uncoordinated brawling, minus an insane Rhia O’Reily dive off the cage. Had the night not also included Charlie Morgan’s monumental capture of the EVE Championship, then perhaps this would have been better remembered.