NJPW Wrestle Kingdom 17 takes place on January 4th from the world-famous Tokyo Dome and looks to kick off 2023 with a bang.

The show features several highly-anticipated matches, the arrival of a new title and the first defence of the IWGP Women’s Championship. The event is also special as it features several inter-promotional matches as wrestlers signed to AEW, WWE, STARDOM, and NOAH perform under at NJPW’s flagship show.

The full card is as follows:

Let’s take a look at the matches and what we think will go down at Wrestle Kingdom 17. 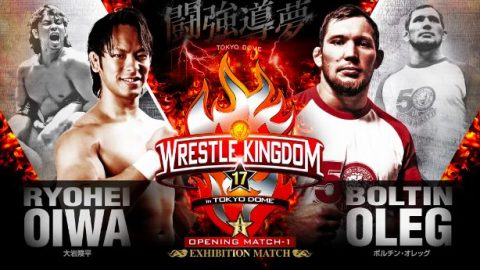 Prediction: Oleg was introduced to the NJPW crowd by Yugi Nagata, bringing a certain amount of hype with him. Expect to see him make quick work of Oiwa. 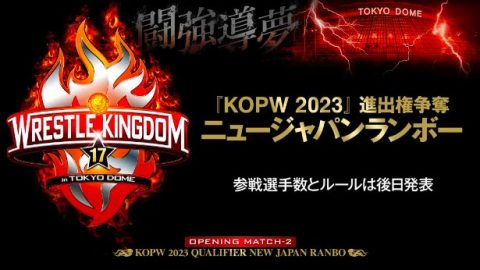 This multi-man battle royal will determine the challenge for the provisional KOPW 2023 Championship at New Year Dash!!

Prediction: With no participants announced picking a winner is slightly tricky. However, the previous winner Shingo Takagi is not on the main card, therefore his inclusion in the Rambo could be very possible and see him victorious once again. 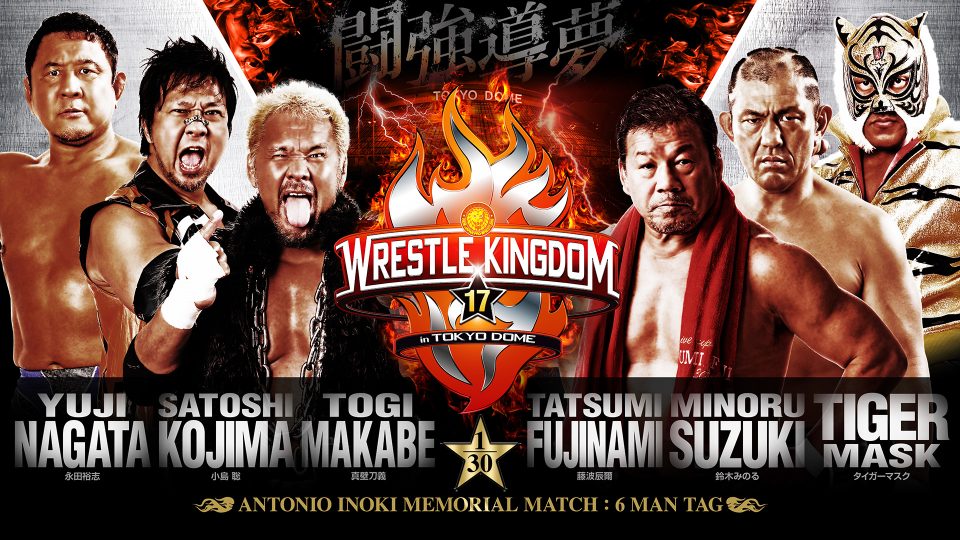 Six of NJPW’s most legendary wrestlers will compete in a six-man tag team match in memory of the renowned Antonio Inoki, who passed away earlier this year.

Prediction: The trio of Tatsumi Fujinami, Minoru Suzuki and Tiger Mask will pick up the win in this memorial exhibition match. 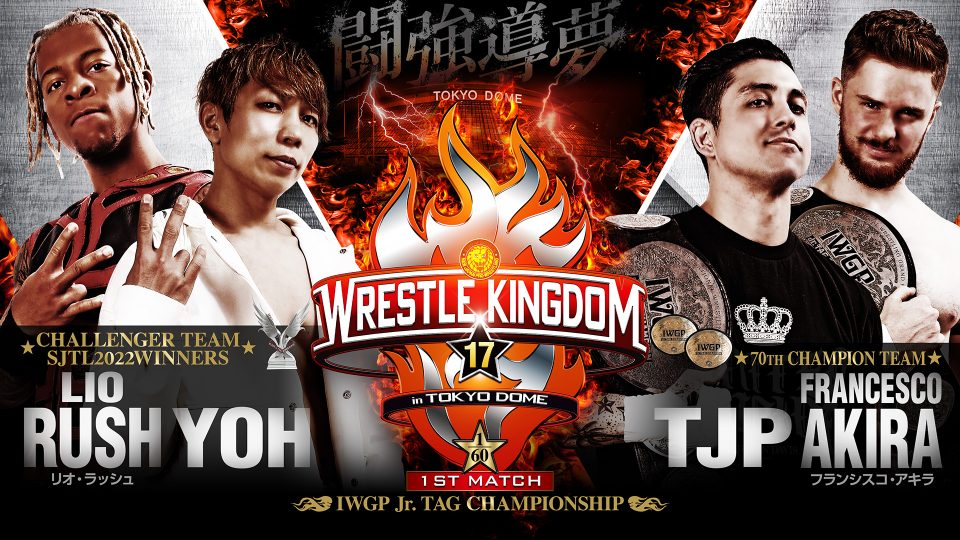 The opening match of the main card promises to be a high-flying, high-octane outing as four of NJPW’s most entertaining stars battle it out for the Jr tag team titles.

Prediction: Lio Rush & YOH won the Super Jr. Tag League to challenge for the titles but Francesco Akira made things personal by attacking YOH. Expect to see LiYoh get revenge and the titles. 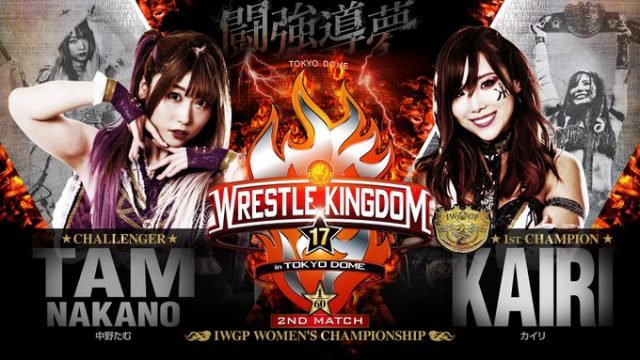 This history-making match has all the ingredients to be a momentous occasion. At NJPW Historic X-Over Kairi was crowned the first-ever IWGP Women’s Champion and at Wrestle Kingdom 17 makes her and the title’s first defence against Tam Nakano. Plus the speculation that the former Sasha Banks could be involved somehow adds further spice to the proceedings.

Prediction: Since returning to the ring Kairi has been on top form while Tam Nakano has proven herself to be one of STARDOM’s top commodities giving this match a big fight feel in the Joshi world. Despite Nakano’s skill and tenacity, Kairi will remain champion and have a confrontation with Mercedes Varnado post-match. 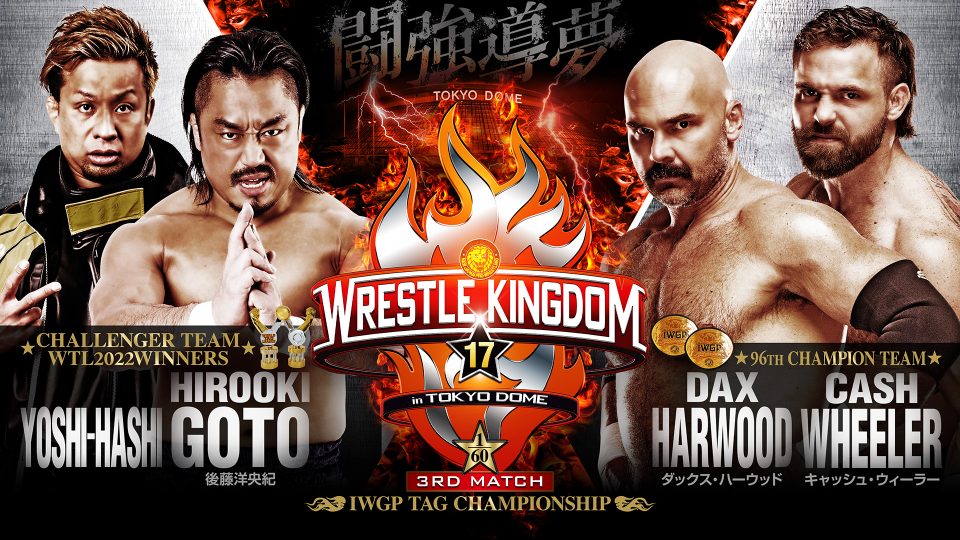 Dax Harwood and Cash Wheeler make their Wrestle Kingdom debuts against the duo of Yoshi-Hashi and Hirooki Goto with the IWGP Tag Team Championship on the line. Hashi and Goto known as Bishamon have shown themselves to be a formidable team by winning the NJPW World Tag League to earn their shot a the titles thus giving FTR a tough challenge in the Tokyo Dome.

Prediction: Despite the excellent title defence against Aussie Open at Royal Quest II, there has been little benefit for NJPW having FTR as the IWGP tag champs, therefore expect to see Bishamon pick up the win and get the title back on home soil. 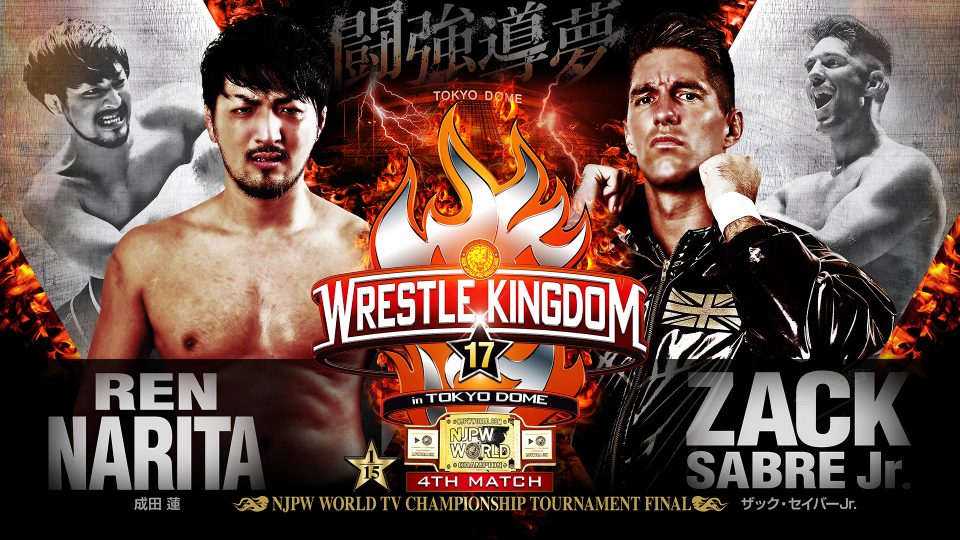 Zack Sabre Jr takes on Ren Narita for the first time in the tournament final for the newly introduced NJPW World TV Championship. Over the months of October and November, Narita and Zabre Jr defeated three opponents each to reach the finals at Wrestle Kingdom 17.

Prediction: Both wrestlers boast a strong submission style of combat and will be looking to use it to full effect to be crowned the inaugural TV champ. Expect to see Sabre Jr come away from this highly-technical affair with his first NJPW singles title and first-ever World TV Champion. 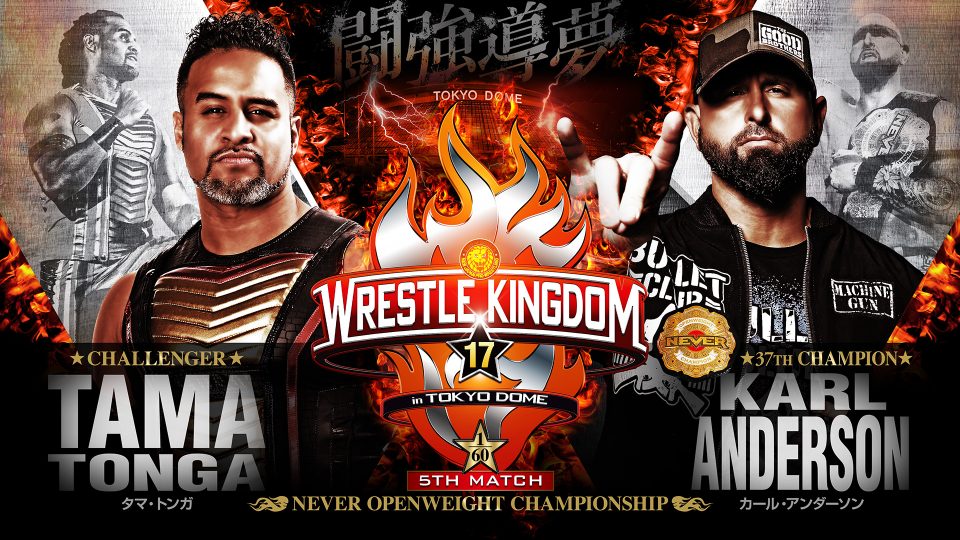 The two former Bullet Club stablemates were put on a collision course when Anderson defeated Tonga for the title back in June at Dominion. Since then Anderson returned to WWE while an NJPW champion and cheated to retain the title against Tonga’s brother, Hikuleo at the World Tag League finals. The situation means that Tongs is both out for revenge and to bring the title back to Japan.

Prediction: This deeply personal and unprecedented match will result in Tama Tonga sending Anderson back to WWE without the Never Openweight Championship. 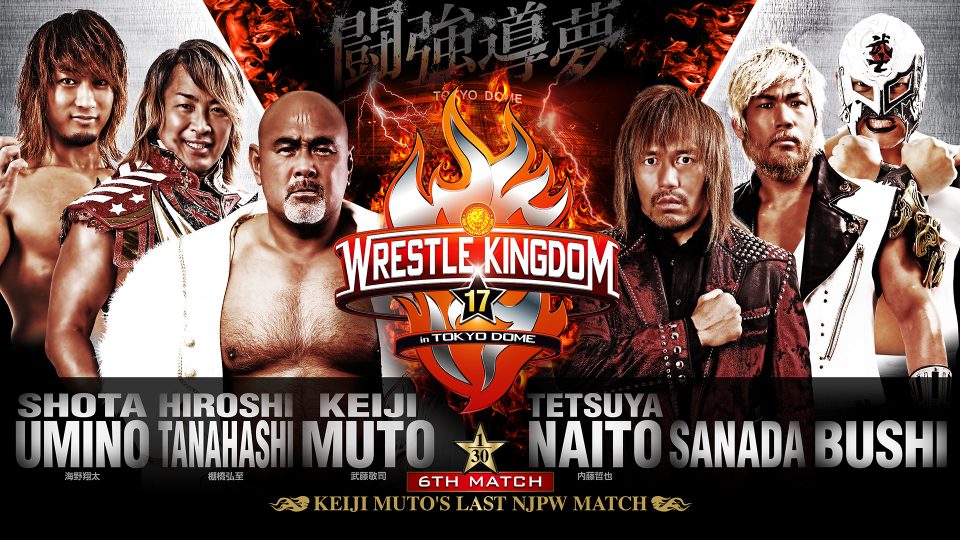 Los Ingobernobles de Japon faces off against the multi-generational team of future star Shota Umino, current Ace Hiroshi Tanahashi and the legendary Keiji Muto, who is wrestling his last match for the promotion.

Prediction: Despite this being Muto’s NJPW swansong the heel faction led by Tetsuya Naito will get the victory. 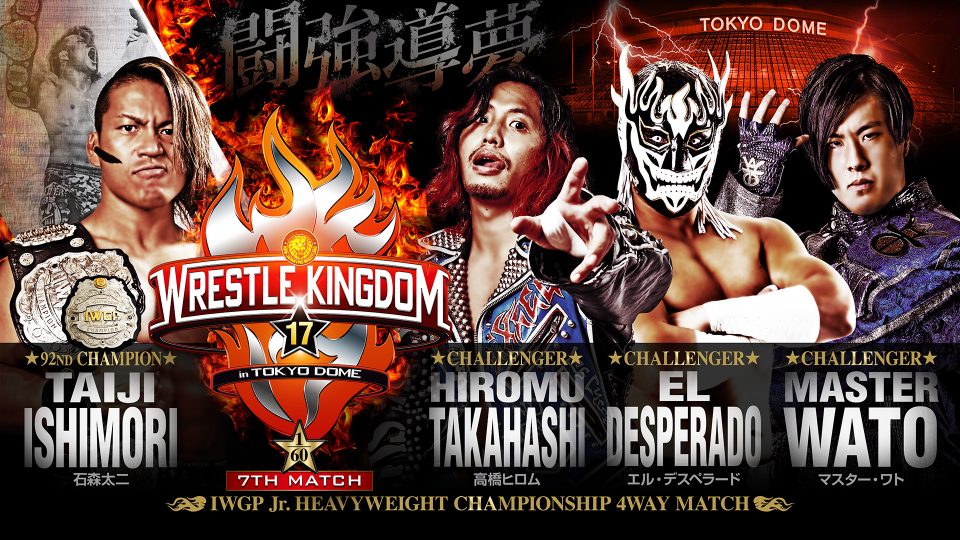 For is second defence of the IWGP Jr Heavywieght Championship, Ishimori certainly has his workd cut out for him in this Four-Way match. His opponents in the form of the unpredictable Takahashi, the exciting El Desperado and the explosive Master Wato make this match an intriguing outing.

Prediction: Takahashi poses the biggest threat to Ishimori but the inclusion of Desperado and Wato make this outcome tricky to determine. Expect to see a fun and frantic match with Ishimori emerging as the winner. 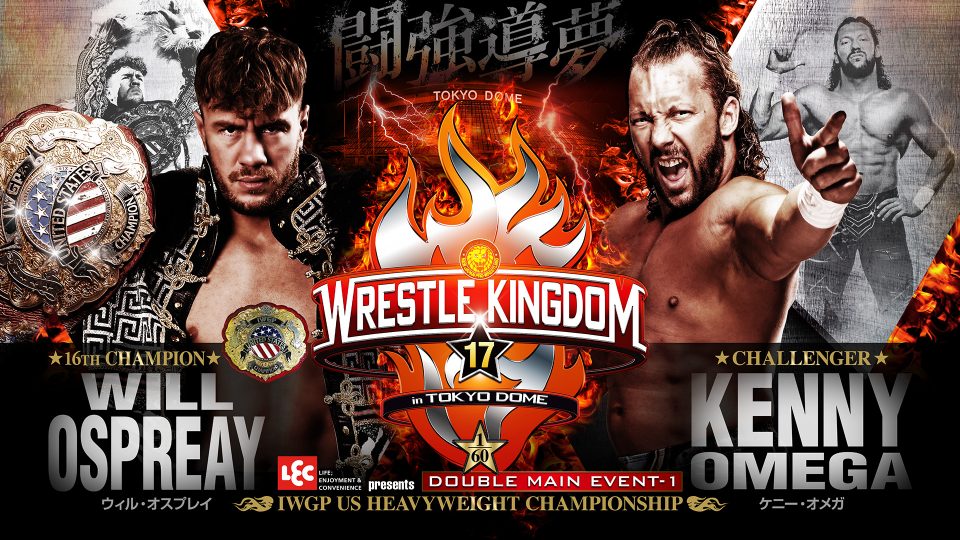 The first of the double main events pits the returning Kenny Omega against bitter rival and IWGP US Heavyweight Champion Will Ospreay. The two have gone back-and-forth hurling insults at one another on social media and in AEW for years and now put their money where their mouths are to determine who is the better professional wrestler.

Prediction: Ospreay and Omega are two of the best performers in the world and this highly-anticipated must-see match. Their heated rivalry over who is the bigger star overshadows the US title being on the line but adds a real-life aspect to the feud. Due to the star power of each wrestler the outcome is yet another difficult decision, but Ospreay is NJPW’s priority and takes the victory. 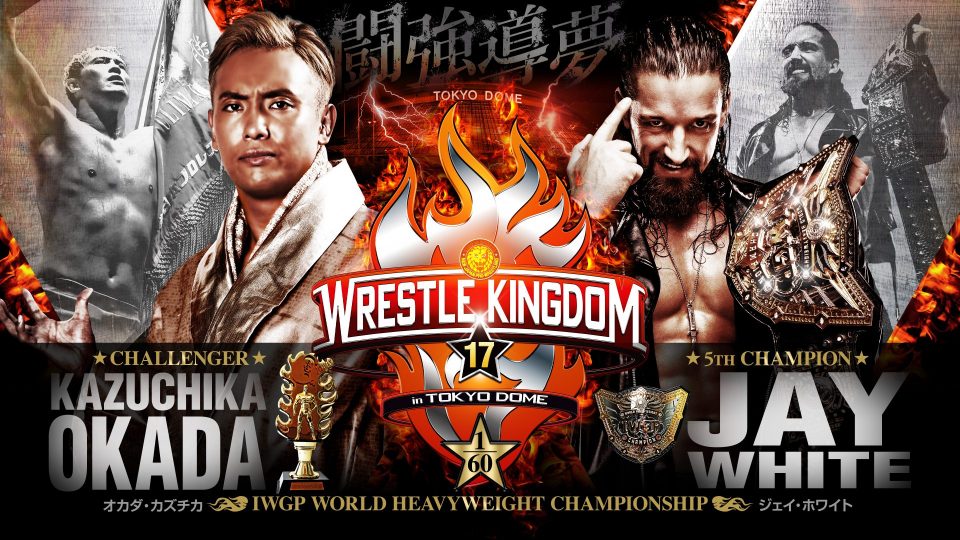 Longtime rivals Kazuchika Okada and Jay White battle it out once again for the IWGP World Heavyweight Championship. Their rivalry spans years and features friendship, betrayal and several superb matches. It was White who defeated Okada to capture the championship at last year’s Dominion adding further fuel to their feud. Okada then won the G1 Climax for the second year running to challenge White at Wrestle Kingdom 17.

Prediction: Over the years Okada has established himself as Mr Wrestle Kingdom. He has headlined the event multiple times and hold victories over Tanahashi, Naito, Omega, Ibushi, Ospreay and White. At Wrestle Kingdom he will continue his epic run and take the title from the hands of the Bullet Club leader.

The show will air live globally on NJPW World which fans can subscribe to for ¥999 per month. NJPW World is available online and on Amazon Fire TV. The event will air at the following times in North America and the UK – 12:00 am(PST), 3:00 am(EST), and 8:00 am(GMT).