As sure as night follows day, thunder follows lightning and the whole world follows Jade Cargill’s Instagram account, WWE releases are followed by fan made “Ex-WWE Superstar Is #AllElite” graphics.

On the 29th April, following the latest batch of releases, one of these familiar graphics did the rounds and was notable for featuring a name that hadn’t even appeared on WWE’s list. 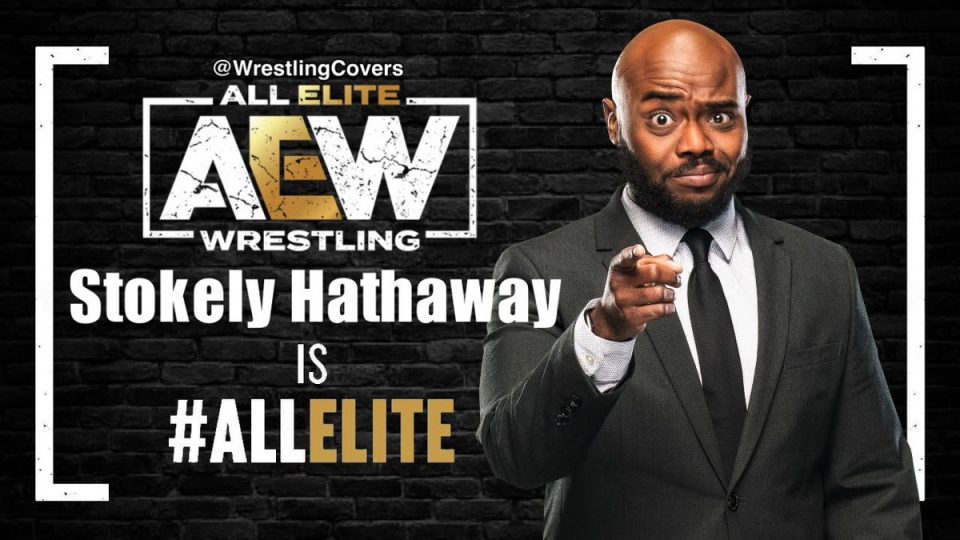 Whilst the name may have been unfamiliar to some, the bright eyes and manic smile of NXT’s Malcolm Bivens were certainly familiar to most.

Part tribute, part rib, part fantasy booking, it’s not unusual for fans to use a performer’s real, or at the very least, their non-WWE name in these mock-ups. Stokley Hathaway, a ROH alumni and popular independent wrestler prior to his WWE run, was always going to be de-Bivensed. So when the graphic landed, the online speculation took off.

Now the shortest known unit of time is a zeptosecond. It’s a trillionth of a billionth of a second. Or slightly longer than it took the masses to anoint Stokely Hathaway as the new manager to AEW’s TBS Champion, Jade Cargill.

‘Manifesting this’, they posted in the comments below the bootleg ‘Is All Elite’ graphics. Pictures of both Hathaway and Cargill, ate up the likes, as the idea caught fire. A bevvy of Bivens Baddies was the order of the day.

One minute you’re representing wrestling’s hottest prospect, an AEW home-grown megastar-in-waiting to boot, and the next, the fans want to give away your golden goose to a stand up comedian called Stokely. It’d give you whiplash if you weren’t already in a neck brace. 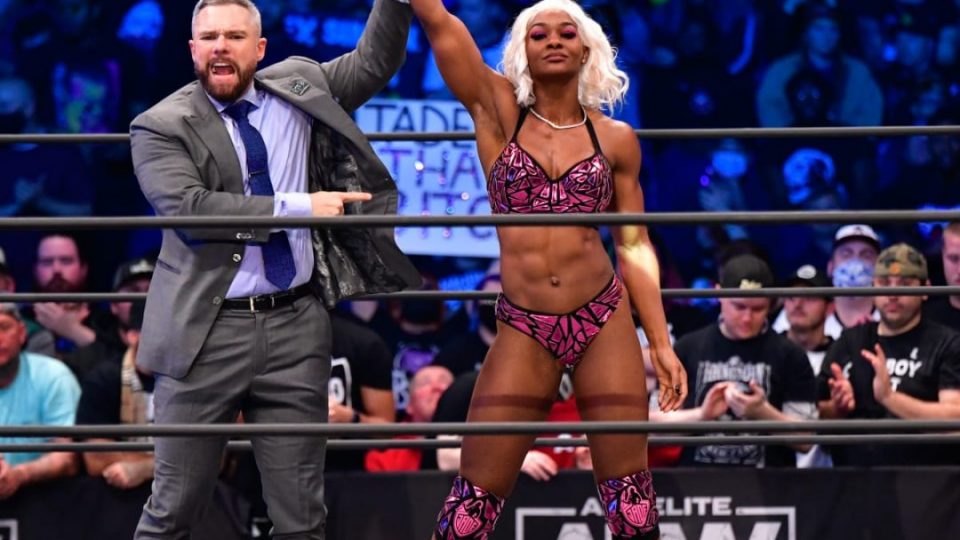 But ‘Smart’ Mark’s record speaks for itself and he does have the cake stains to prove it.

Under Sterling’s expert tutelage, Jade Cargill has gone from a promising ‘green like money’ rookie, an admitted “gamble” in the words of AEW owner Tony Khan, to the inaugural and reigning TBS Champion, with a 30-0 undefeated streak in singles competition. She is the clear favourite to add another body to that streak, at AEW’s May 29th Double or Nothing PPV, where she will meet Dark Order’s Anna Jay.

As for Sterling, well, you can’t keep a good lawyer down.

‘Smart’ Mark doesn’t just deal with his client’s match contracts, he actively participates in them. Sometimes with unexpected repercussions. At that same Double or Nothing PPV, on the YouTube Buy In show, the wrestling lawyer will team with another AEW newcomer, a reinvigorated ‘Premier Athlete’ Tony Nese.

Nese, who has seen his own stock rise in AEW as a direct result of ‘Smart’ Mark’s influence will team with Sterling to face the oddest of odd couples in Danhausen and Hook, in a contest that will more than likely cause the Internet to melt into butter.

Behind the scenes look into training for #HOOKHausen (@730Hook & @DanhausenAD) & nemeses @TonyNese & @MarkSterlingEsq before #AEWDoN (Double Or Nothing) Buy-In LIVE at 7pm on Sunday May 29th at https://t.co/lBSV4sbfpB, right before the PPV!

Tune in NOW to #AEWRampage on TNT! pic.twitter.com/agZGiszOWl

You don’t see that sort of client commitment on Law and Order.

And when not representing Jade Cargill and Tony Nese, those two, Rob Liefield drawn, ab perfect demigods, you will find Sterling in and around the AEW locker room, offering high end legal advice to anyone with deep enough pockets who can afford his retainer.

From Long Island’s favourite son, MJF, to the humble black shirted security guards, everyone knows that ‘Smart’ Mark is the go to man for all your Wardlow needs. Can you even comprehend the legal gymnastics needed to draw up a contract that included ten televised public lashings? 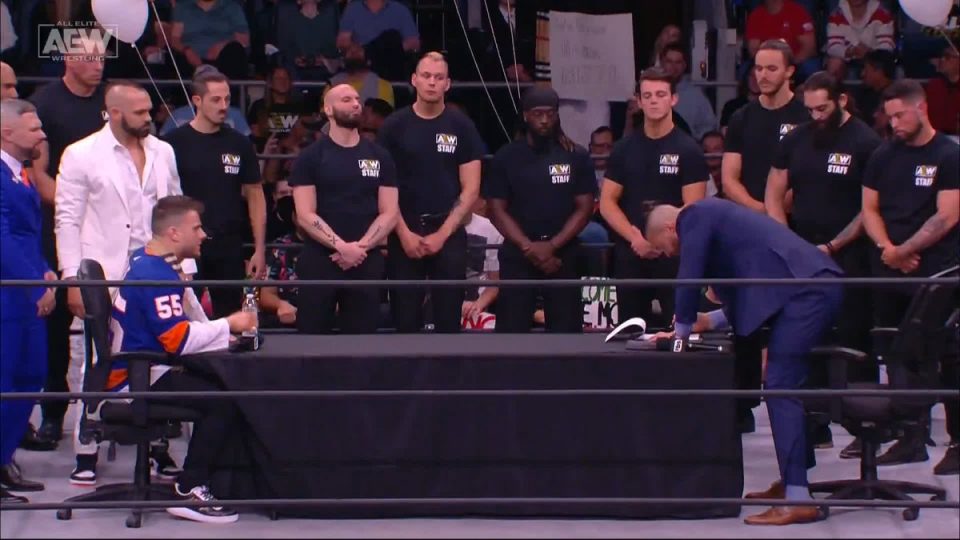 But, even after all that, there will be those who still want to show Sterling the door.

That burning urge to say “What if?” is just too strong.

So let’s look at Stokely Hathaway. He’s a unique ‘sign immediately’ talent, and if he does decide that he has unfinished business in wrestling, he wouldn’t be short on offers.

It was reported after his release that Bivens had in fact rejected a new contract with the company, seemingly deciding his future lay elsewhere. Although exactly where that elsewhere is, remains unclear. 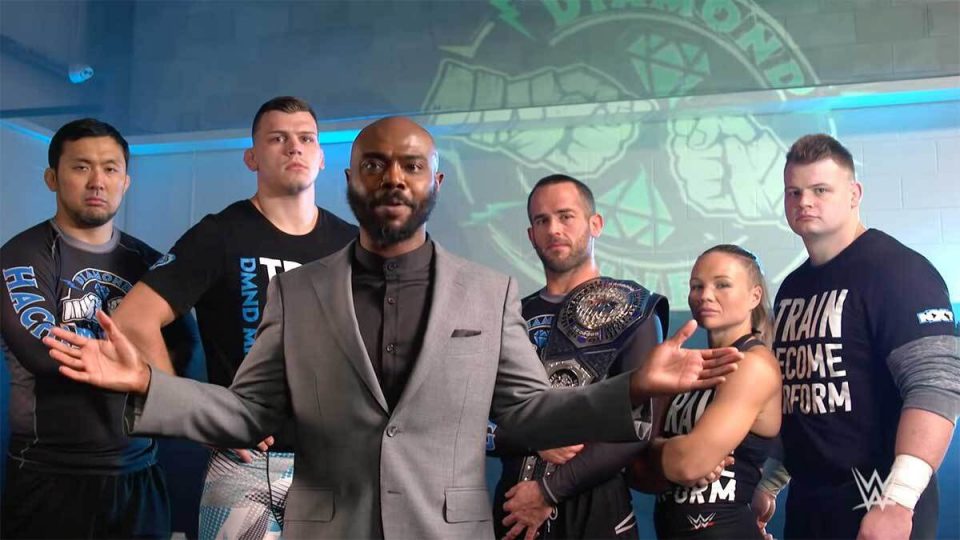 As one of the top talkers in the business, Stokely Hathaway could wear any number of hats for AEW. Manager, commentary, even an on screen authority figure could be interesting. Both AEW and Ring of Honor, would certainly benefit from his talents, and it doesn’t hurt to have a professional comedian on your two hours of entertainment programming.

Hathaway adds that ‘it’ factor that AEW sometimes lacks and whilst not the biggest name of recent times to move from WWE to AEW, there is enough potential mileage in Stokely Hathaway to make a difference to the overall product.

Imagine if Hathaway revisited his rivalry with Orange Cassidy. Or took up with former protégé MJF. That’s a year of programming right there. Think of the fun to be had with John Silver and Alex Reynolds on BTE or what he would make of Sammy and Tay’s shenanigans. Add him to Paul Wight and Mark Henry’s commentary on Dark. Give him the Wingmen! 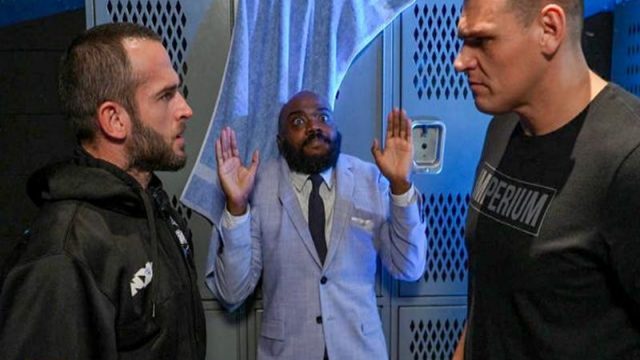 The possibilities are endless, such is the former Bivens’ talent. It would be a riot. In contrast, Sterling is at his funniest when being driven through tables.

Stokely’s elevate talents. He is the ultimate hype man. He raises profiles around him by the sheer gravitational pull of his own magnetic persona. In an AEW where people can get lost in the shuffle, Stokely Hathaway could reinvigorate an under utilised but nonetheless talented portion of the roster.

A revamped AFO, with a new name and new direction could be superb. Wouldn’t you want to live in a world where Stokely Hathaway represents Private Party, or has to carefully navigate conversations with the Butcher and Blade, or fire up a disgruntled Jora Johl? Who even knows what he would make of space cadet Angelico or the unhinged Bunny, but it would be glorious to see.

Then what about Andrade El Idolo? Well either have Hathaway represent him too, or free up one of the best wrestlers on the planet to compete for the company’s top gold. Or do both! That’s the beauty of injecting someone like Stokely into the picture. The more you look at AEW’s roster, the more possibilities you find for Hathaway to make stars.

However, if all that’s true, then Jade Cargill doesn’t need Stokely Hathaway. She’s already the brightest star to emerge from AEW so doesn’t require further illumination. What she needs, is a ‘Smart’ Mark Sterling.

The TBS Champion doesn’t need a mouthpiece, she needs someone to snatch the mic from and to hold her belt. When you are dressed in a sparkling silver cat suit adorned with emerald green dollar signs, flanked by your own personal Baddies, Keira Hogan and Red Velvet, a special group entrance complete with choreography and pyro, just how much more hype do you need?

It’s no secret that Cargill is AEW’s crown jewel, even Cody mentioned in his farewell letter “While we’re at it, give Jade the Codyvator.” If there is such a thing as a hype limit, it’s probably marked with a picture of Cargill in X-Men cosplay. 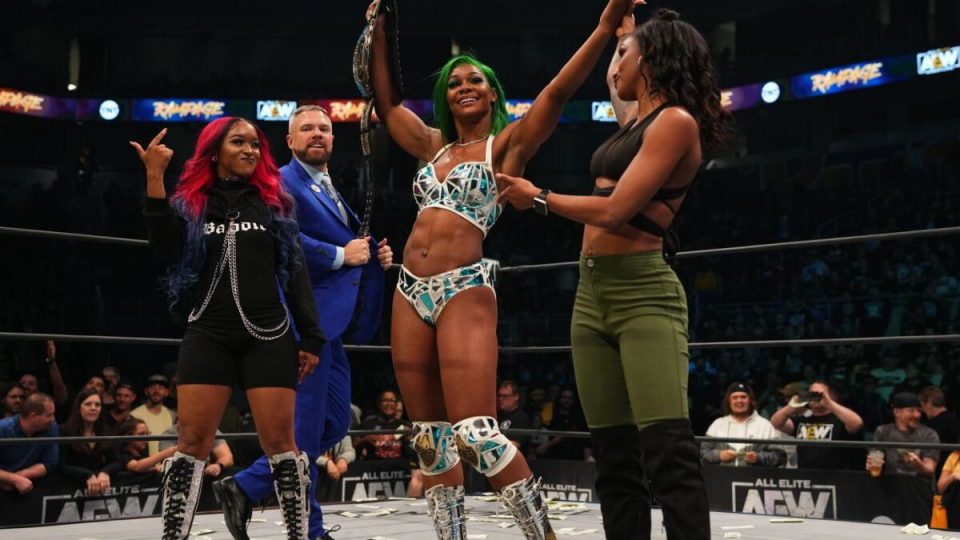 In contrast, Sterling isn’t a hype man. He’s the very antithesis of a hype man. He is a toady. A suit. A bureaucratic underling, subservient to his meal ticket. Content to sit in the back and hope nobody notices, as long as the money keeps rolling in.

The TBS Champion is supposedly the monster heel of AEW’s women’s division and not, contrary to our own eyes, a walking, talking comic book hero come to life, her presentation, invariably, second to none.

It’s hard to not cheer Jade Cargill. That’s why you need ‘Smart’ Mark skulking around ringside to remind you not to.

The undefeated star takes on all comers, a dominant fighting champion and the sleazy lawyer curtails this behaviour before arrogance turns to competitive confidence.

Sterling provides a much needed wet blanket, in the guise of stalling tactics and contract negotiations, thus limiting the marquee spectacle of a Jade match which, in turn, allows the relative newcomer to develop her ever improving move-set out of the amphitheatre of constant public scrutiny.

And the TBS Champ demands your attention whether in ring, in promos or simply sat spectating in the Baddie Section.

Meanwhile Mark Sterling is the lowly specimen you can sneer at, limping along at the back with neck brace and crutch, pompous yet somehow small, always at the back, careful not to fill up any more than a mouse’s share of the screen. All nice choices that enhance the performance, his own frailties used to emphasise the majesty of his undefeated champion.

In one moment of genius, Sterling distanced himself from the uplifting brilliance of Cargill’s own Baddie Section, by cringeworthily proclaiming himself a ‘goodie’, allowing the Baddie Section to remain in it’s own pocket universe, away from traditional roles of face and heel, as an untainted celebration of self-image empowerment. 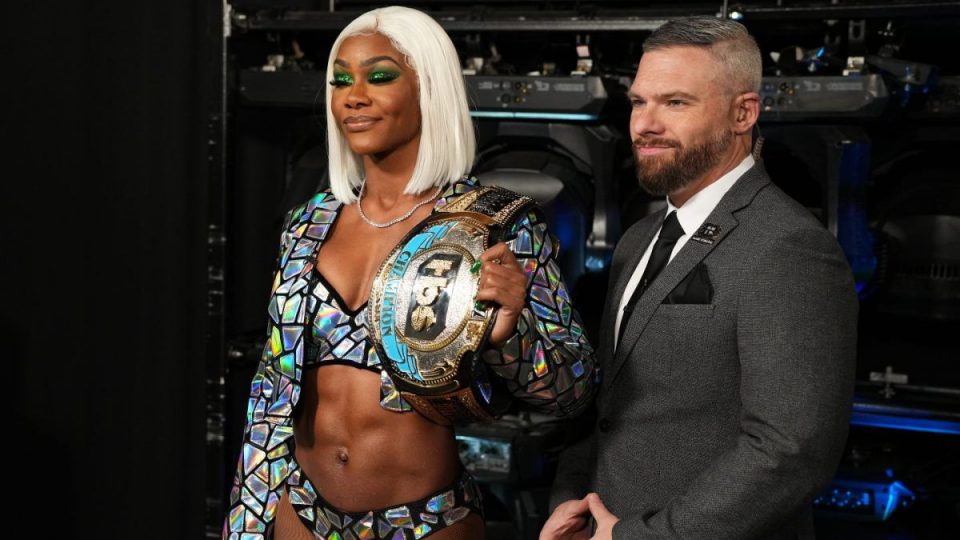 So there really is no need to fix what clearly isn’t broken. ‘Smart’ Mark Sterling should remain the TBS Championship’s punchbag and belt stand for the foreseeable future.

If Stokely Hathaway is AEW bound, it wouldn’t be unthinkable for him to make his debut at Double Or Nothing but what that debut looks like, if it happens at all, we’ll have to wait and see.

One thing remains true, on the 29th, amidst the bright lights of the Las Vegas casinos and the digital siren-song of the slots, the TBS Champion Jade Cargill, with her hapless lawyer in tow, is still AEW’s best gamble to date.

AEW Dynamite airs on TBS on Wednesdays 8pm ET. AEW Double or Nothing is available to order from Fite TV.