Bayley has had many classic matches during her WWE career. The first Women’s ‘Grand Slam’ Champion returned at SummerSlam alongside IYO SKY and Dakota Kai and was warmly welcomed by the WWE Universe. Quite frankly, she had been missed.

Bayley had been out for over a year with an ACL injury sustained whilst training for an ‘I Quit’ match against Bianca Belair that was set for last year’s Money In the Bank.

The star had carried large portions of the ‘ThunderDome Era in 2019-20 on her shoulders, with her entertaining character, interview segments and general in-ring work, but fate would befall her at the worst time, just as crowds were coming back and she was at the top of her game.

Finally returning, the longest reigning SmackDown Women’s Champion, is like a new acquisition for the women’s division, with plenty of fresh matches and feuds available to her and her new stable.

Recently working her first Raw match, Bayley is scheduled to have her first Premium Live Event bout since Hell in a Cell in June 2021 by returning at Clash at the Castle on September 3rd to team with IYO SKY and Dakota Kai against Alexa Bliss, Asuka and Bianca Belair.

On the cusp of her big match return, we look back at five of Bayley’s best matches from across her WWE career.

Teaming with Sasha Banks vs. Kabuki Warriors- Raw 13/7/20- Epic Women’s Tag Title bout and arguably the best since the titles have been in existence. 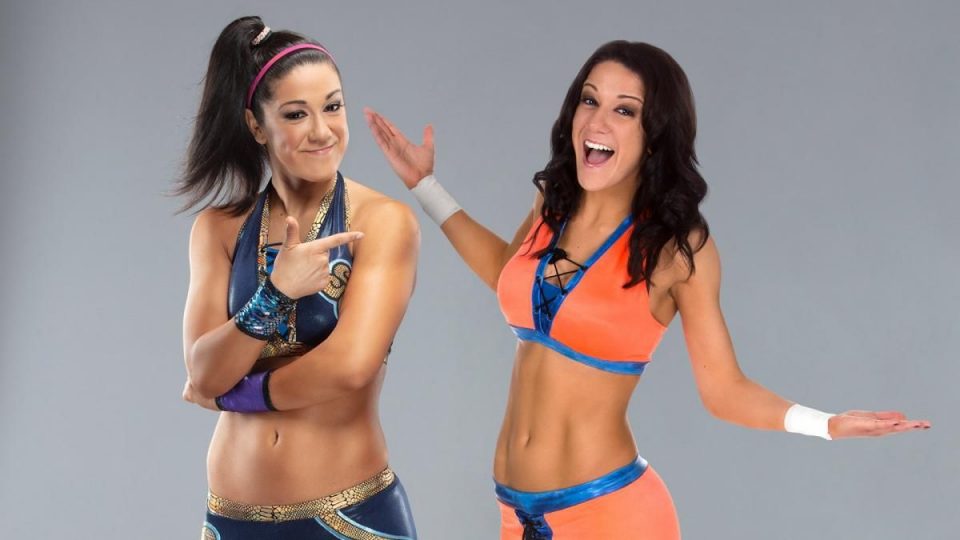 Headlining an epic episode of Raw which featured the debut and also bizarrely last, appearance of Emmalina and the superb Festival of Friendship between Kevin Owens and Chris Jericho, Bayley faces Flair for her Raw Women’s Title, channelling her “nervous energy” which she mentions in her pre match interview to her advantage having chased Flair for weeks.

The match starts with some technical exchanges, Bayley not backing down from the Champion, slapping her to the outside.

Flair rallies and controls the majority of the bout, whiplashing The Hugger neck first into the bottom turnbuckle and hitting a perfect Moonsault from the barricade onto the challenger. Bayley hangs on and eventually builds momentum gaining close near falls from the Macho Man top rope elbow and a Hurracanrana also from the top.

Interference from both Dana Brooke and Sasha Banks assist both Champion and Challenger, eventually leading to Bayley getting the shocking win, pinning the seemingly unstoppable Flair with a Bayley to Belly suplex, hitting the jackpot and gaining the title in Las Vegas.

The match and the moment were both very good and executed well, although one can’t help thinking that Bayley’s coronation and first run with the Raw Women’s Title should have been held off until WrestleMania just weeks later. 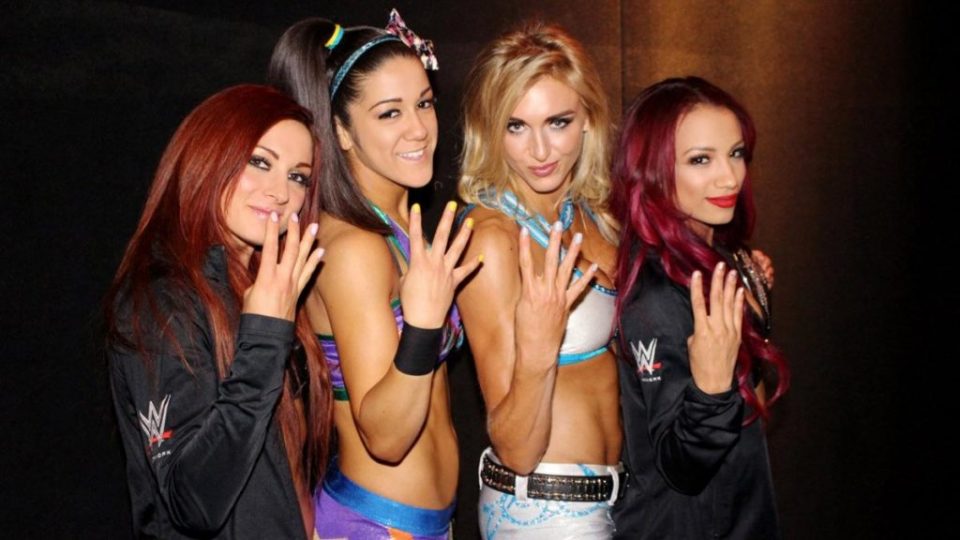 The only time the Four Horsewomen have collided in a Fatal Four Way together. Charlotte enters as Champion, but all four have a claim to the belt.

A hugely entertaining bout that crams everything it possibly can into its twelve minute run time, each of the four are allowed their chance to shine, Bayley with a cheeky roll up on Flair in the early moments, before the Champion is taken out by being throw into the LED board on the ring apron by her three challengers.

The ‘Lass Kicker’ and Banks team up against Bayley, before Becky suplexes Sasha out of the ring, leaving her one on one with Bayley and attacking her already injured knee.

Bayley is in full ‘hugger’ mode here, crowd favourite and ultimate underdog. A series of back elbows puts Flair in trouble, before her pin attempt is broken up. Bayley embraces her vicious side throwing Lynch to the steel ramp at ringside.

A Bayley to Belly from the top seems to have the title won, however it’s not enough as this is Sasha Banks night; after trying unsuccessfully to make Flair tap to the Banks statement, Sasha resorts to a crucifix pin to win the match and the NXT Women’s Title. One of the first of many great bouts put together by a combination of these four, but their only one all-together.

This bout steals the show. The year 2015 is spearheaded by the Women’s Revolution, led undoubtedly by these four athletes. 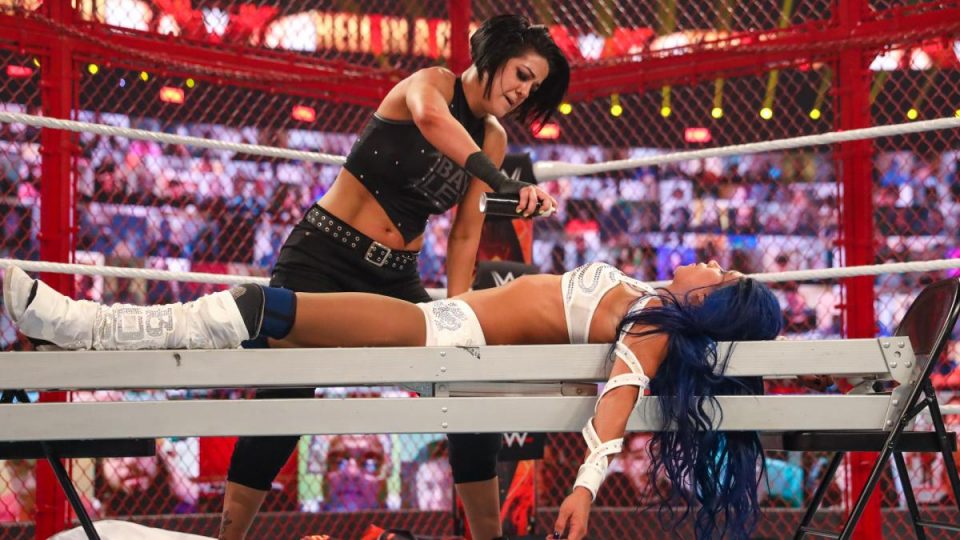 Bayley’s record breaking 380 day reign as SmackDown Women’s Champion would come to an end here at the hands of her best friend and fiercest rival.

In what really should have been the main event of the evening, a brilliantly paced battle inside of the Cell, this is a brutal bout that stands out, even without a crowd physically in attendance.

Bayley loses her weapon of choice (a steel chair) right at the beginning of the match as Sasha dominates the early going. The intensity continues, with Bayley ramming Sasha to the Cell itself time and time again, before Banks sends Bayley into the cage herself following a Meteora from the steps outside the ring.

Taking over, the longest reigning SmackDown Women’s Champion sends her challenger throat first into a kendo stick propped between the Cell and the steps, before catapulting The Boss into yet more of the sticks.

The champion is power bombed into the steel mesh of the cell, before she recovers and whips Sasha face first into a chair inside the ring. A sunset flip sends the back of Sasha’s head and neck blasting into another chair.

The vicious assault continues as Bayley whacks Sasha over and over with Kendo sticks, the challenger visibly shacking as she lies at ringside. Finally getting her trusty chair inside of the cell, (the weapon that she had attacked Banks with to kick start the feud). It ultimately backfires on Bayley, as Sasha uses it to her advantage, choking the Champion with it in a Banks Statement variant to gain the tap out.

Banks completes her set of Cell matches against the other Four Horsewomen here, winning the SmackDown Women’s Title for the first time. 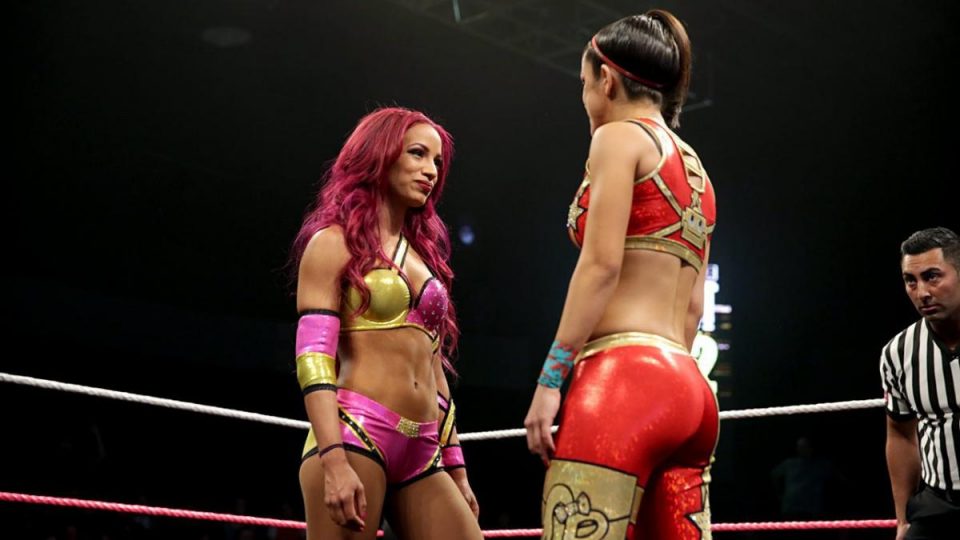 The pair become the first women to compete in a 30 minute Iron Woman Match here and the first women to main event TakeOver. Both daunting tasks at the best of times, but they also had to follow up their previous superb match up, (more on that to come).

A rematch with a big match feel, Lita, Stephanie McMahon, Charlotte and Becky Lynch all sit ringside for the epic about to unfold. The Full Sail audience set the tone, fully invested from the opening bell with chants of “main event”, “women’s wrestling” and “you deserve it” filling the air.

A cautious start by both, followed by a series of roll up near falls, both weary of losing that illusive first fall and countering each-other’s signature moves, showing how well they knew one another.

Back and forth they go before a poke in the eyes from Sasha allows her to roll up the champion to take the cheap first fall with nine minutes gone. Bayley quickly ties things up with a beautiful Bayley to Belly at the eleven minute mark.

Going to the floor, Sasha swings Bayley hard into the steel steps, head and neck first, regaining the momentum of the match. Bayley lies in trouble in front of her family at the halfway mark, counted out after going into the LED board entrance as Banks taunts them and makes Bayley super fan Izzy cry. Sasha leads two falls to one.

Bayley once again ties things up 2-2, hanging onto a sunset flip in a mistake by Banks. From there Bayley takes control for the first time in the match, with a face plant, series of elbows and a forearm. Sasha continues to kick out, stubbornly clinging onto her dream of becoming a two time NXT Women’s Champion.

Double knees in the corner puts Sasha back in control before Bayley takes it to the floor, ramming Sasha’s arm into the steps and snapping it over the ropes. Bayley launches herself from the stairs onto her challenger before nailing a Bayley to Belly on the floor with just five minutes remaining.

Exhaustion starts to set in to both before they explode for a fantastic finishing sequence. In a throwback to their previous match, a reverse Bayley-canrana is blocked by Sasha who hits her own version of a belly to belly suplex. Banks manages to lock in the Banks Statement with her weakened arm and fingers with a minute to go, Bayley then reverses it into a submission move of her own as Sasha scream submission with just two seconds left of the time limit.

The crowd erupt, Izzy is now in tears of joy and the NXT roster applaud the brilliant effort. The thirty minutes fly by, the crowd are fantastic throughout and the match does itself justice as a follow up to their epic previous bout… 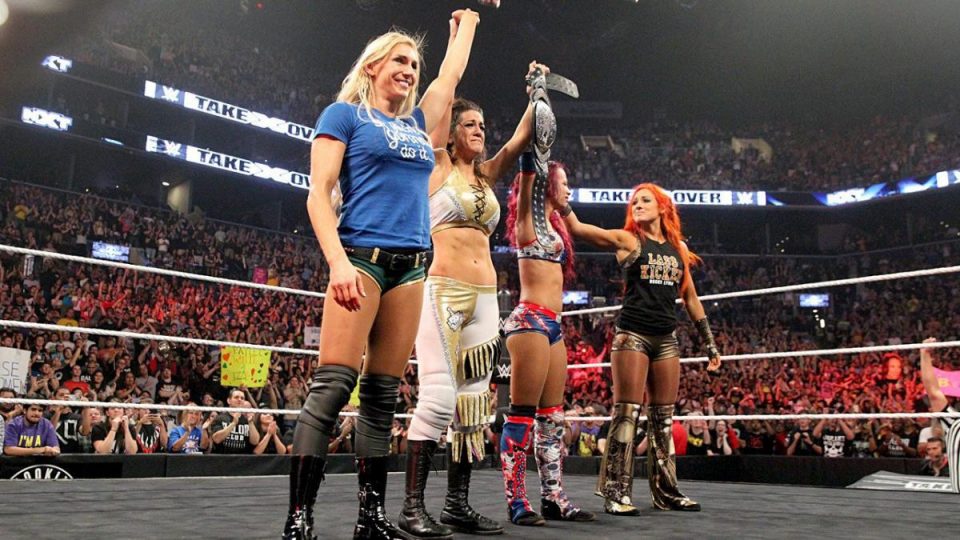 The previous bout is just topped however by the pair’s meeting just weeks earlier at NXT TakeOver: Brooklyn. A historic match that may well be the greatest women’s bout in WWE history.

Bayley is the challenger here, Sasha having held the NXT Women’s Title for seven months. The Champion berates Bayley at the opening bell, Bayley bringing the fire straight away as she nails the Champion.

Duelling chants from the raucous Barclays Center members of the WWE Universe as Bayley hits a springboard elbow to score the first near fall and maintains control with a dropkick through the bottom rope from one side of the apron to another.

Sasha turns the tide, kicking Bayley to the outside before taking control down on the mat. Sasha plants Bayley with double knees as she lies prone across the top rope.

Verbal abuse from the champ leads to a spirited comeback from the challenger before The Boss concentrates her attack on the hand of Bayley, ramming it between the steel steps and apron. Sasha follows up with a devastating plancha to the outside, gaining a near fall of her own.

Bayley battles back in charge with a series of double axe handles and a vicious suplex into the turnbuckles. Bayley to Belly is blocked into a roll up before Sasha locks in the Bank Statement in a great false finish. Bayley manages to reverse the hold, putting the champion in her own finishing hold.

The crowd is electric, totally invested in the match, coming to their feet as Bayley finally hits the Bayley to Belly for a close two count.

“This is awesome” chants begin as Sasha shoves her rival off the top rope, the challenger spiking herself into the canvas.

Both women battle back to the top rope where Bayley executes a reverse hurracanrana on the Champion, slamming her head first into the mat before immediately following it up with a second Bayley to Belly suplex to the groggy Champion to win the title.

An epic encounter that tells a great story and leads to the coronation of Bayley as NXT Women’s Champion. Every move means something and the pacing and structure of the bout is great.

Charlotte and Becky join the pair, the Four Horsewomen sharing the ring together in celebration.