20 wrestlers fought in each ring and when only 30 men still remained, they all moved to one ring until there was a last man standing.

The prize for winning the bout was a WCW World Title bout (the winner of the first contest won the belt itself).

This feature ranks all four World War 3 events. Which one was the best? 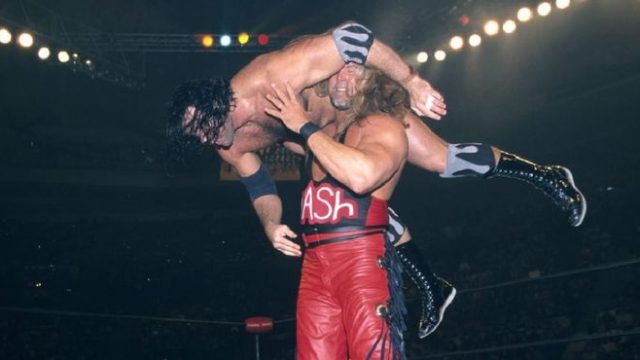 The final World War 3 event was by far the worst of all time. That may partly explain why WCW never ran the gimmicked show again.

The undercard was dreadful. Wrath versus Glacier and Stevie Ray versus Konnan put the live crowd in Michigan to sleep. Ernest Miller and Sonny Onoo bested Perry Saturn and Kaz Hayashi. For some reason this contest lit up the card even though the action was awful. Onoo pinned Saturn after Miller kicked him in the head.

The audience remained invested in the next match as the Cruiserweight Title bout once again stole the show. Billy Kidman defeated Juventud Guerrera in a hot match-up to lift the belt. There were lots of big spots but the transitions were excellent and worked in the context of the match.

The next bout was supposed to pit Rick Steiner against his turncoat brother Scott, who earlier in the year had joined the nWo. However, the nWo had battered Rick senseless backstage and brought him to the ring so Scott could lock in the Steiner Recliner. WCW World Champion, Goldberg stormed the ring and laid out Scott to a huge response.

Chris Jericho versus Bobby Duncum Jr. would have been considerably better had it been five minutes shorter. This bout was passable, but at nearly 14 minutes long failed to hold one’s attention.

Strangely, the World War 3 bout did not headline the show and was placed in the semi-final spot instead. Kevin Nash outlasted 59 opponents to earn a World Title match at Starrcade. ‘Big Sexy’ dumped out Scott Hall and Lex Luger to earn the victory. The match was a mess and impossible to get invested in until the final stages. Nash was a popular winner though.

The main event pitted super worker Bret ‘Hitman’ Hart and a game Diamond Dallas Page in a bout where DDP’s United States Championship was on the line. For a WCW main event in this era, the action was top notch and fought at an impressive pace. The only thing that let this down was the booking. Following a ref bump, Hart knocked out DDP with brass knucks.

The ‘Hitman’ then locked in the Sharpshooter on an unconscious DDP as a crooked referee rang the bell. Sound familiar? People say Vince McMahon is obsessed with the Montreal Screwjob. The bout’s original referee then came round and reversed that decision. DDP then miraculously came round and hit Hart with a Diamond Cutter for the win. The match was good until the overbooked ending.

With only two matches that can be credibly be considered decent and the rest which were completely awful, World War 3 1998 is better best avoided.

World War 3 1997 was headlined by the 60-Man Three Ring Battle Royal. There were shenanigans ahoy, as only 59 men emerged for the bout. Kevin Nash was MIA. The final four were surprise entrant, WCW World Champion, Hollywood Hulk Hogan who took the 60th spot, Scott Hall, The Giant and Diamond Dallas Page.

DDP was dumped out as the fans loudly chanted Sting and went wild when he descended from the rafters. However, ‘The Stinger’ was seven feet tall and was clearly an imposter. Hogan eliminated himself, seemingly in fear, as “Sting” eliminated The Giant. That left Hall as the survivor.

“Sting” unmasked to reveal none other than Kevin Nash. The nWo celebrated post-match. This was supposed to set up a title bout at SuperBrawl VIII. However, the controversial ending to the Starrcade main event, meant a Hogan/Sting rematch took place at that show instead. Hall was made to wait until Uncensored in March for his title bout and lost against ‘The Stinger.’

Elsewhere, Ric Flair and Curt Hennig rolled back the years and contested a very good bout with the United States Title on the line. The veterans took every short cut to gain an advantage and went to war in a fight, very different from their technical battles in the past. The creative finish came when Hennig smashed Flair in the head with the title belt whilst ‘The Nature Boy’ had Hennig locked in the Figure Four. Hennig retained the title.

Match of the night honours went to Eddie Guerrero and Rey Mysterio Jr. who contested another fast paced, high flying, technical marvel, which was a worthy sequel to their Halloween Havoc classic.

The rest of the undercard seemed like someone’s idea of a joke. Raven versus Scotty Riggs, Steve McMichael versus Alex Wright and Perry Saturn versus Disco Inferno were pure house show fodder.

Yuji Nagata defeated Ultimo Dragon in a passable encounter that was more notable for the crowd’s total apathy towards the participants. Finally, the Steiners disappointed in their bout with The Blue Bloods. Steven Regal and Dave Taylor were awkward opponents for the the champions; too big and too slow to flatter the Steiner’s high impact offence.

With only two good matches and a card that is mostly missable, the 1997 edition of World War 3 does not carry a high recommendation.

Diamond Dallas Page challenged Johnny B. Badd for the Television Title. All action with strong storyline support, this match was WWF-like in it’s sports entertainment booking. Badd pinned DDP to retain the gold and also acquire the services of DDP’s missus, The Diamond Doll herself, Kimberley Page.

Big Bubba Rogers versus Jim Duggan was another WWF throwback but not in a good way. For 10 whole minutes, the veterans put the Virginia crowd to sleep.

Cutie Suzuki and Mayumi Ozaki versus Bull Nakano and Akira Hokuto was a phenomenal bout which demonstrated how far ahead of its time Japanese women’s wrestling was.

On paper, Chris Benoit versus Kensuke Sasaki sounded like a sure-fire barn burner. In practice, it was decent but ultimately disappointing.

Sting and Ric Flair collided in a bout that was billed as their final encounter. Ultimately, that would prove not to be the case but it was probably their last good match. This was essentially every other bout the pair had contested in the 80s and first half of the 90s in a slimmed down 15 minutes. It was everything it needed to be and the live crowd was heavily invested in the action. The ‘Stinger’ won via submission.

Finally, the headliner was the inaugural World War 3 60-Man Three Ring Battle Royal. The action, like in all World War 3 bouts was impossible to follow, with no room whatsoever for the participants to move, until half of the competitors were ejected.

The final six were Randy Savage, Hulk Hogan, The One Man Gang, Sting, Lex Luger and The Giant.

‘The Hulkster’ eliminated Sting, Luger and Giant at the same time.

Oddly, the referees then failed to spot The Giant pulling Hogan from the ring under the ropes and assumed he had been eliminated. When Savage eliminated One Man Gang he was declared the winner and new WCW World Champion. That was meant to be a swerve, after Savage had been decimated earlier in the show and was barely mobile throughout the Battle Royal.

Despite his buddy’s struggles and heroic victory, Hogan petitioned the referees post-match and rather ungraciously continued to protest the finish rather than congratulate his pal.

Amusingly, the crowd booed ‘The Hulkster’ and loudly cheered Savage. It was crowd reactions like this which convinced Hogan to turn heel the following year. 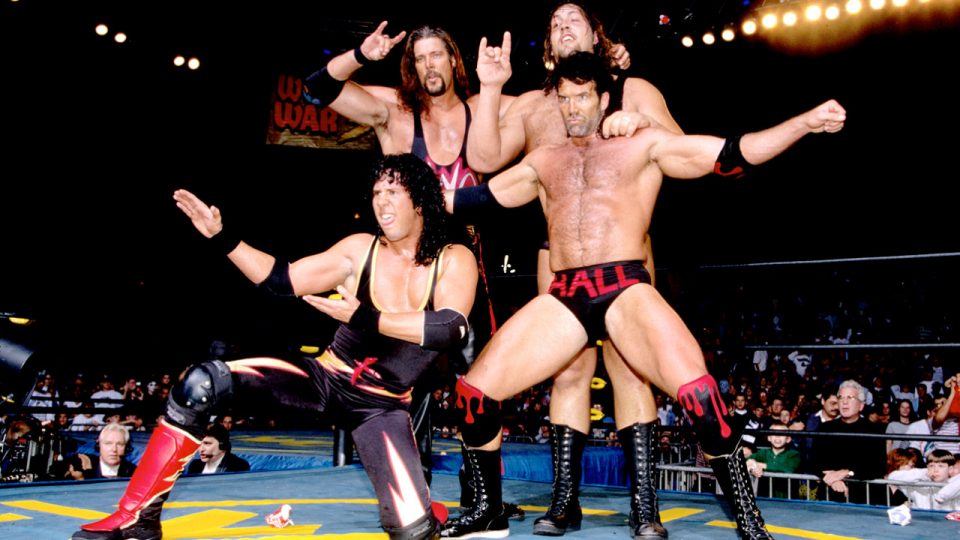 World War 3 1996 was by some distance the best World War 3 event ever staged.

With the J-Crown Championship on the line, champion Ultimo Dragon defeated Rey Mysterio Jr. in a phenomenal opener. Dragon dominated the early going until underdog Mysterio Jr. made a strong comeback. The match built to a crescendo with some stunning back and forth manoeuvres.

To allow the crowd time to recover, WCW sensibly placed the comedy bout between referee Nick Patrick and Chris Jericho next. Jericho had one arm tied behind his back as per the stipulation. Despite a game effort by Patrick, Jericho earned the win in a passable match-up.

The Amazing French Canadians versus Harlem Heat was about as entertaining as watching grass grow. Harlem Heat’s victory gave their manager, Sensational Sherri five minutes with The Canadian’s manager, Colonel Robert Parker. Mercifully, their “match” only lasted 90 seconds, when Parker fled and was counted out.

Happily, the next two bouts were superb. WCW Cruiserweight Champion, Dean Malenko contested a tight clinic with Psicosis. The action never let up and the psychology was beautiful as Malenko maliciously broke his opponent down. The champion retained.

The Triple Threat Match for the WCW World Tag Team Championship was a curious attraction, given each of the team’s wrestled very different styles. The Outsiders outlasted The Nasty Boys and The Faces of Fear. The Outsiders retained after a wild brawl of a match-up, that was far more entertaining than anyone could have anticipated.

The World War 3 Battle Royal itself was not great but was the best WCW ever staged. The final stages saw Lex Luger left alone with nWo members, The Giant, Syxx, Kevin Nash and Scott Hall. Luger backdropped Hall over the top rope then press slammed Syxx to the floor.

‘The Total Package’ put Nash in the Torture Rack to a rapturous crowd response, before Giant dumped out both men to win the bout. That deflated the crowd somewhat, but did set up a Hogan versus Giant match at the nWo pay-per-view event Souled Out in January 1997, which ultimately led to the future Big Show’s exit from the nWo.

With three great matches and worthwhile action and storyline development elsewhere, World War 3 1996 was unquestionably the pinnacle of the event’s lineage.

You can watch every World War 3 event exclusively on the WWE Network.