The show was free to all fans, who surrounding the ring, watching the event on their own motorcycles. It was an incredible spectacle but made the company zero money at the gate. There were four Road Wild pay-per-view events in WCW history between 1996-1999. This feature ranks each one.

Road Wild 1998 was a disaster from an entertainment standpoint. It fared better on pay-per-view but did not come close to performing as well as Bash At The Beach the previous month.

The headline “attraction” pitted Hulk Hogan and Eric Bischoff versus Diamond Dallas Page and Jay Leno. Yes, Jay Leno of ‘The Tonight Show’ fame. The 48-year-old chat show host did not draw fans like Dennis Rodman had the prior month and WCW and Hogan were mocked following the event due to the nWo leader selling Leno’s offence like he was the second coming of Bruno Sammartino. The match was woeful as you would expect. The finish came when Leno pinned Bischoff.

The semi-main event was a curiosity too. Instead of allowing WCW World Champion, Goldberg to defend his title against a worthy opponent on the show, he competed in a non-title Battle Royal instead. Billed as the the nWo Invitational, the bout featured both nWo and WCW wrestlers. Goldberg, at least won by pinning, yes pinning, in a Battle Royal, The Giant to win.

Underneath, there were some shocking encounters that had no place on pay-per-view. Brian Adams versus Steve McMichael was a disaster. Adams had no clue what he was doing and ‘Mongo’ was not capable of carrying anyone in a wrestling bout. The pair blew spot after spot before the finish was mercifully called at the six minute mark. This was easily one of the worst matches in wrestling history.

Stevie Ray versus Chavo Guerrero, Boogie Nights versus The Public Enemy and The Barbarian versus Meng were all total duds. Even Rey Mysterio Jr versus Psicosis was a major disappointment. Mysterio’s timing was off and the pair mostly traded in their usual high flying spots with a series of rest holds. WCW performed an unpopular bait and switch when the advertised Rick Steiner versus Scott Steiner battle did not take place when Scott claimed he was injured. WCW Commissioner, JJ Dillon then booked the match for Fall Brawl instead. Understandably, that announcement went down like a lead balloon with the live crowd.

The only highlights on the card were a passable but overbooked three way between Perry Saturn, Chris Kanyon and Raven and a decent battle between Chris Jericho and Juventud Guerrera for the Cruiserweight Championship. Dean Malenko, acting as special referee, assisted Guerrera in pinning the overbearing Jericho.

With only one good match on a nine bout card, Road Wild 1998 is a strong contender for worst pay-per-view event of all time.

Road Wild 1999 occurred during a strange time in WCW. Hulk Hogan was a babyface World Champion, Goldberg was spinning his wheels in the mid-card, Booker T was back in his Harlem Heat tag team, despite a successful singles run between 1998-99 and WCW boss, Eric Bischoff was close to the exit door. The uncertainty in the promotion, inevitably did not lead to a successful event.

In the headline position, WCW World Champion, Hogan clashed with Kevin Nash in a contest which was billed as the match we didn’t get on the January 4, 1999 Nitro. It is arguable whether the 10 second “Fingerpoke of Doom” bout in January was superior to this 12 minute match-up. The stipulation was Loser Must Retire. That obviously did not happen. Hogan won a pedestrian contest.

Underneath, ‘Macho Man’ Randy Savage battled with Basketball star, Dennis Rodman. Rodman’s unexpected return to WCW saw him ‘steal’ Gorgeous George away from Savage, hence this battle. The match was a nonsensical brawl which ambled around the arena with little purpose. Gorgeous George swerve turned on Rodman and assisted Savage for the win. Rick Steiner blatantly cheated in front of referee, Mickey Jay, without punishment during his bout with Goldberg. ‘Da Man’ weathered the storm and hit his usual Spear and Jackhammer combo to overcome Steiner.

Sting clashed with Sid Vicious in another boring match. Sid pinned Sting to build him up for his subsequent feud with Goldberg, which dominated the Autumn of 1999. Other disappointing bouts on the card were a Six Man Tag Team battle pitting Vampiro and the Insane Clown Posse versus Rey Mysterio Jr, Billy Kidman and Eddie Guerrero and Buff Bagwell versus The Cat. There were a couple of highlights on the undercard. Harlem Heat versus The Jersey Triad was a decent tag team contest. Heat successfully defended the WCW Tag Team belts in the bout. Another Six Man Tag Team battle pitting Curt Hennig, Bobby Duncum Jr. and Barry Windham versus Perry Saturn, Dean Malenko, and Shane Douglas was far better than it had any right to be, given the age of the participants.

However, the undisputed best match of the card saw Chris Benoit clash with Diamond Dallas Page over the United States Championship. DDP played the annoying heel perfectly, with his stable-mates in the Jersey Triad interfering on his behalf, before the valiant Benoit overcame the odds to defend his belt. Moderately better than the previous year’s Road Wild, but the 1999 incarnation was still a poor show.

Road Wild 1997 was headlined by a heated battle between WCW World Champion Lex Luger and former champion, Hollywood Hulk Hogan. Luger had only won the belt six days earlier on Nitro, but Hogan, after interference reclaimed the gold. Underneath, The Outsiders held onto their WCW Tag Team Championship versus The Steiners in a decent back and forth battle, that ended in a disqualification when Kevin Nash pulled the referee, Nick Patrick out of the ring. It wasn’t all good news for the nWo on the card, however. ‘Macho Man’ Randy Savage was squashed by The Giant in a dominating performance by the seven footer.

Amidst the decent action, there was also some dross on display. Curt Hennig versus Diamond Dallas Page and Alex Wright versus Chris Jericho were both awkward style clashes. Harlem Heat versus Vicious and Delicious was a tedious 10 minute affair, which flattered neither team. Ric Flair took on Syxx in a match that promised much but delivered little. The match was full of basic striking offence from both men, with nothing in the way of psychology or transitions. Flair won when he low blowed Syxx and rolled him up for the cheap pinfall victory.

Rey Mysterio Jr carried Konnan to one of the best matches of his career in a bout billed as a Mexican Death Match. The story of the match was that Mysterio entered the contest with a knee injury. Mysterio’s knee, in a nice bit of psychology was Konnan’s target for his offence throughout the bout. Mysterio’s perseverance saw him nail Konnan with some hope spots before he inevitably fell to his opponent’s Tequila Sunrise submission finisher.

The nine match card was rounded out with a decent Tag Team Elimination Match pitting Steve ‘Mongo’ McMichael and Chris Benoit versus Jeff Jarrett and Dean Malenko. The star of the contest was Jarrett, who eliminated himself when he pulled ‘Mongo’ on top of him for the pin. It was the ultimate heel move from Jarrett to avoid a pasting. Benoit and ‘Mongo’ double teamed Malenko for the win just two minutes later.

With no standout matches on display, Road Wild 1997 was not particularly memorable. However, all of the card was passable to decent and was far superior to the two Road Wild events that would follow it. 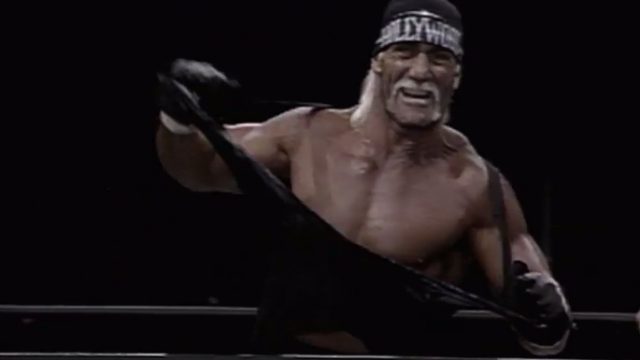 The first event of the Road Wild chronology, Hog Wild, was by the far the best of the event’s lineage.

The card was highlighted by two marquee battles that featured the newly formed nWo stable. Hollywood Hulk Hogan defeated WCW World Champion, The Giant in a passable match to win his second WCW World crown. The bout lasted an interminable 15 minutes and would have been infinitely better if it were seven or eight minutes shorter. However, the angle was more important than than the match. The nWo leader as WCW World Champion would lead WCW to prosperity it had never seen before.

Post-match, Hogan’s buddy, The Bootyman, Ed Leslie attempted to join the nWo only to be attacked by the trio. This was to make the point that the nWo triumvirate were “for life” and all previous friendships and alliances were for naught. Interestingly, Leslie, would eventually wind up as a member of the nWo in early 1998. The semi-main event saw The Outsiders take on Lex Luger and Sting. The faces dominated the closing stages of the bout. However, with Hall in Luger’s Torture Rack, referee Nick Patrick got knocked to the canvas. Amongst the confusion, Hall covered Luger and Patrick delivered a fast count to give the nWo the victory. The bout was disappointing and overlong in truth.

There were some choice matches on the under-card however, that were worthy of pay-per-view. Ric Flair versus Eddie Guerrero was a fine piece of work and proof that ‘Slic Ric’ could still deliver at the highest level with the right opponent in the mid-1990s. Flair made Guerrero look like a genuine threat to his United States Title during the 14 minute match-up. ‘The Nature Boy’ pinned Guerrero while he was held in the Figure Four Leg Lock.

Chris Benoit and Dean Malenko put on a near 30 minute wrestling clinic. The pair smashed each other with suplexes and exchanged multiple submission manoeuvres in a back and forth battle. It was an electric encounter and worthy of the pay-per-view price tag on it’s own. Rey Mysterio Jr and Ultimo Dragon tangled in a superb high flying battle, which opened the card on a positive note. Harlem Heat and The Steiner Brothers collided in a decent contest that never quite clicked in truth.

Despite the good, there were also some duds on the show. Ice Train versus Scott Norton and Bull Nakano versus Madusa offered little in the way of entertainment. However, at five minutes in length, both bouts were largely inoffensive.

Hog Wild was a terrific event and by the far the best of the Road Wild/Hog Wild chronology.

You can watch every Road Wild/Hog Wild pay-per-view exclusively on the WWE Network.