Fall Brawl was WCW’s traditional September pay-per-view. The event debuted in 1993 as a pay-per-view. WCW had previously used the Fall Brawl name for their fall edition of Clash of the Champions. 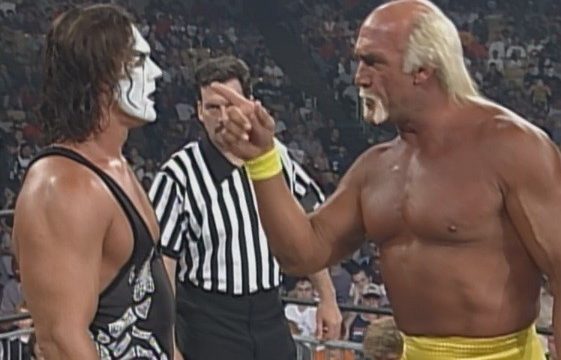 1999 was the first year that Fall Brawl was not headlined by a War Games match. Given the disaster of the 1998 War Games bout, that was a relief. However, a main event singles bout pitting 46-year-old WCW World Champion Hulk Hogan versus the 40-year-old, Sting was not the tonic.

This bout was even worse than their Starrcade 1997 disaster and the finish was even more nonsensical. Perennial babyface Sting, with zero forewarning turned heel on the ‘Hulkster’ by nailing him repeatedly with Lex Luger’s baseball bat. The referee called the match as Hogan was supposedly unconscious. Yes, Hogan wasn’t pinned to lose the belt.

The result made little sense, and made even less the following month at Halloween Havoc – Vince Russo’s first night on the job.

The match offered pedestrian action and was filled with run-ins by random wrestlers such as DDP, Bret Hart and Sid Vicious who had little storyline reason to assist either man. It was the epitome of everything wrong with WCW at the time and the event was sandwiched between the Eric Bischoff and Vince Russo eras. If neither of those bookers were the answer to WCW’s woes, neither were the interim team of Kevin Sullivan and Kevin Nash.

Fall Brawl 1999 is a a strong contender for worst wrestling pay-per-view of all time. The headliner rounded off a truly terrible event.

1998 was the most profitable year WCW ever had. However, events like Fall Brawl 1998 offered a glimpse into the disastrous times that lay ahead. WCW tinkered with the War Games format and changed the rules for the 1998 edition. The bout consisted of three teams of three, instead of the usual two teams of four. Also, the match could end by pinfall rather than the usual submission. An additional stipulation dictated that the wrestler who scored the winning pinfall or submission would be declared the number one contender to Goldberg’s WCW Championship. If that sounds convoluted, it’s because it was.

The match existed purely as a showcase for The Warrior. WCW were effective at building the anticipation for his entrance. However, that meant the crowd were not particularly invested in the bout until he appeared. Also, the participants stalled and stalled until the big moment arrived. Finally, after 17 minutes the ring filled with smoke and Warrior appeared as the final entrant into the match. After smashing through the participants, he made a beeline for Hogan and chased him out of the cage backstage. That allowed DDP in a complete anti-climax after Warrior’s antics, to hit the Diamond Cutter on Stevie Ray for the win.

This match is the worst War Games ever. Bereft of logic and action, it offered little in the way of entertainment for 17 minutes and then built to a three minute period wherein Warrior cleaned house, before the abrupt end. War Games never appeared on a WCW pay-per-view again.

Fall Brawl 1994 was actually a decent show that had two excellent matches on the undercard. However, the main event did not deliver on any level.

For a War Games match, the line-up was underwhelming. The bout pitted Dusty Rhodes, Dustin Rhodes and The Nasty Boys versus Terry Funk, Arn Anderson, Bunkhouse Buck and Colonel Robert Parker. The match was every bit as tedious as it sounds.

The bout lacked the intensity that usual War Games matches possess. There was no blood, which would have benefited the contest immeasurably, and the action or lack of it, was paint by numbers and not befitting the fearsome structure it was housed within. Dusty forced Parker to submit with the Figure Four Leglock to end a truly banal match-up.

The 1995 edition of Fall Brawl played host to the most one-sided War Games line-up ever. On one side, there was Hulk Hogan, Macho Man Randy Savage, Lex Luger and Sting. On the other, was Kevin Sullivan and his Dungeon of Doom lackeys; Kamala, The Zodiac, The Shark and Meng.

It didn’t take a clairvoyant to predict the outcome of this headline bout. The match was bereft of drama and the heels resorted to rest holds in an attempt to build suspense. The Dungeon of Doom’s best chance came when Luger and Savage had a falling out mid-match, which enabled Meng to take advantage. However, it was short-lived as ‘The Hulkster’ entered the contest and ran through his usual routine. Hogan battered the heels and rather abruptly forced The Zodiac to submit to the Camel Clutch.

With that, this 19 minute bore fest was put out of it’s misery. Post-match, The Giant would flatten Hogan to set up their WCW World Title match at Halloween Havoc the next month. The feud ending War Games match existed as a set-up for another conflict. That tells it’s own story about how inconsequential this bout was.

Fall Brawl 1993 was a dreadful event. Nothing sparkled, there was little interest in many of the bouts and sadly the main event did not save the show. A War Games match-up headlined the show and pitted ‘The Super Powers’ team of Sting, Davey Boy Smith, Dustin Rhodes and The Shockmaster. Yes, that Shockmaster, against an elite heel squad consisting of Vader, Sid Vicious and Harlem Heat.

Despite the talent in the match, it failed as an attraction. Very little of note happened, there were no memorable moments and the teams did little more than go through the motions for the entirety of the 17 minute contest. It wasn’t terrible but it wasn’t good either. Incredibly, The Shockmaster, who by this point had been repackaged from an intimidating stormtrooper into a bumbling construction worker, earned the win for his team.

The Shockmaster forced Booker T to submit via a bearhug. That unsatisfying finish rather summed up the entire match. 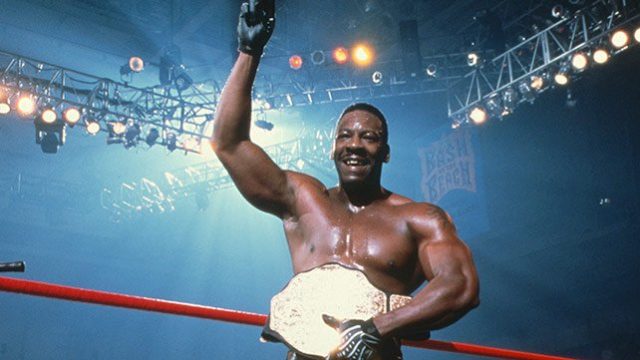 WCW got very little right in the year 2000, but putting it’s World Title on Booker T was one of it’s best decisions of the year.

Although his singles run had been derailed in 1999, Vince Russo rather abruptly put his faith in the former Harlem Heat member and made him champion at Bash at the Beach on July 9, 2000. By September, Booker was firmly established as a headliner and challenged Kevin Nash at Fall Brawl, to try and regain the strap he had lost on Nitro.

Booker dragged ‘Big Sexy’ to an acceptable bout inside the confines of a Steel Cage. The match only lasted nine minutes and that enabled both men to hit their big spots early. Nash also bladed which added to the drama. The finish came when Booker reversed Nash’s powerbomb into a Book End for the clean pin and the title.

Despite the turmoil WCW was in backstage at the time, Fall Brawl 2000 was a solid event and the headliner was a worthy attraction with a popular result. 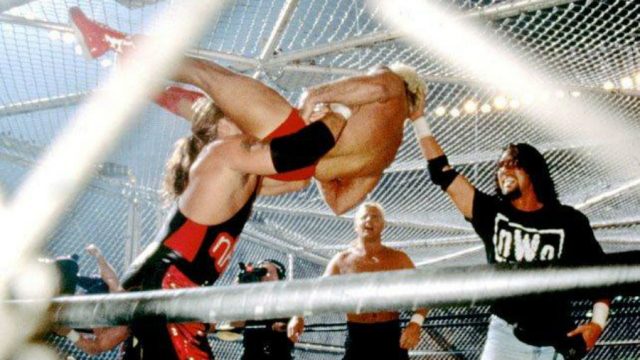 The 1997 edition of Fall Brawl was once more headlined by a War Games battle. This one pitted the nWo team of Kevin Nash, Buff Bagwell, Syxx and Konnan versus The Four Horsemen squad of Ric Flair, Chris Benoit, Steve McMichael and Curt Hennig.

This match was all action from the beginning as Benoit destroyed Bagwell until the nWo won the coin toss and took control. The teams battered each other senseless in an intense back and forth battle. Syxx was the MVP of the bout as his bumping made the Horsemen look like a formidable force that could take down the nWo.

However, the bout ended in familiar fashion for WCW fans of the era. Hennig swerve turned on the Horsemen, aligned with the nWo and cost the Horsemen the match. Hennig hand cuffed Benoit and ‘Mongo’ to the cage whilst the nWo annihilated Flair. ‘Mongo’ submitted to spare Flair further assault. It was a dramatic end to an entertaining bout.

This was the final great War Games match WCW ever produced. It was a worthwhile end to a very good Fall Brawl pay-per-view.

The 1996 edition of Fall Brawl was headlined by an excellent War Games match-up which took place in the early months of the nWo’s reign of terror. The bout pitted the nWo squad featuring Hollywood Hulk Hogan, Scott Hall, Kevin Nash and “Sting” versus the WCW team consisting of Ric Flair, Arn Anderson, Lex Luger and Sting.

The story of the match was that Sting was a turncoat and had turned his back on WCW and defected to the nWo. That seemed to be the case when the final member of Team nWo marched to the ring. A man dressed in Sting attire flattened the babyfaces until the real Sting marched out. Sting battered the nWo, before walking out on his WCW team-mates, incensed they didn’t trust him.

That left the WCW squad at the mercy of the nWo. The numbers game enabled the fake Sting to place Luger in the Scorpion Deathlock while Hogan applied a Front Facelock. Crooked referee, Nick Patrick called for the bell to award the match to the nWo.

An intense, heated and action-packed brawl, the 1996 War Games was the best main event in Fall Brawl history.

You can watch every Fall Brawl event exclusively on the WWE Network.