Edge is set to main event WrestleMania 37 after winning the 2021 Royal Rumble match. In his 23 years in WWE, ‘The Rated-R Superstar’ has only headlined the show once before in 2008. However, Edge has provided the WWE Universe with multiple memorable moments across his previous 11 matches at WWE’s flagship event.

This article lists them all.

After almost a decade on the shelf, ‘The Rated R Superstar’ returned to the ring with a bang at the 2020 Royal Rumble.

The 46-year-old looked like he hadn’t missed a beat as he delivered Spear after Spear on his opponents. His WrestleMania program with former ally Randy Orton was booked masterfully. However, on the night, their Last Man Standing bout tested the patience of most fans, as the pair lumbered around for 45 minutes bashing each other with anything they could find.

There was no logic to the match and it ended with a whimper with Edge putting Orton (and the viewing audience) to sleep with a Sleeper, followed by a Conchairto. 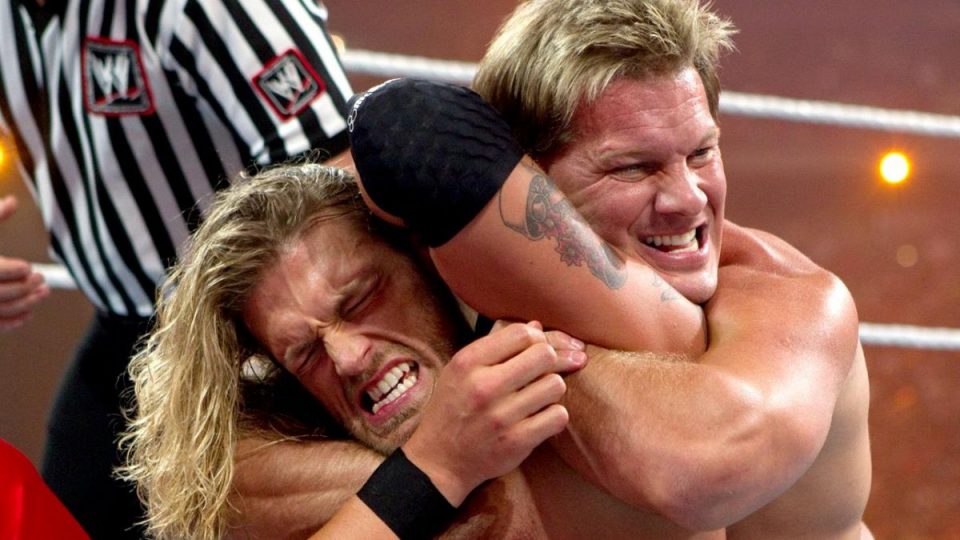 Over the preceding six months, ‘Y2J’ had mocked his former partner for suffering an injury during their Tag Team title reign. Fans expected Edge to earn his revenge by dethroning Jericho at ‘Mania. However, that didn’t happen. Edge was pinned by the champion after a pedestrian effort that never picked up momentum during its 15 minute runtime. 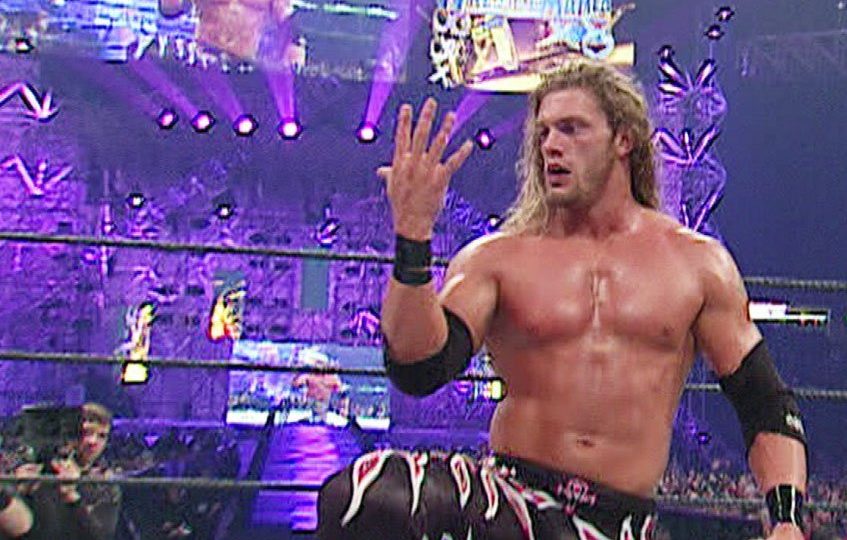 A feud over a Japanese shampoo commercial doesn’t exactly sound like a stellar reason to have a killer wrestling match and so it proved.

Edge clashed with former 5-time WCW World Champion, Booker T in a bout which should have been a stature enhancer for the 2001 King of the Ring winner. However, the silly feud and paltry six minute match-time allocation meant the contest was doomed from the off.

At least Edge won, but this bout is long forgotten.

Edge defended his World Heavyweight Championship versus both John Cena and The Big Show at the 25th edition of WrestleMania.

In a decent if largely forgettable match, all three participants kept the bout moving and the crowd engaged. However, this was the standard triple threat formula you have seen a million times before. Solid but not spectacular. Cena won when he AA’d Edge on top of ‘Show and pinned the giant to win the belt.

Edge would regain the title from Cena the following month. 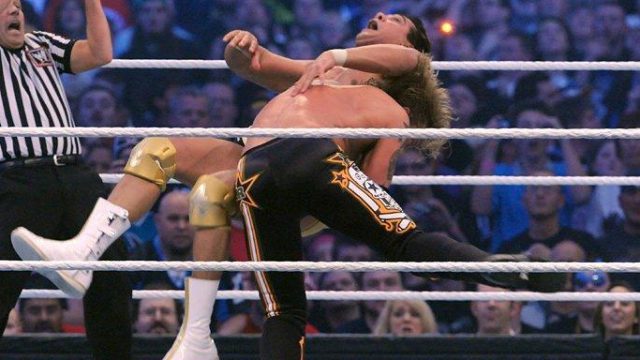 For close to a decade, it was believed that this match was Edge’s last. If it had been so, it would have been a worthy finale.

The World Heavyweight Champion was defending his gold against the 2011 Royal Rumble winner, Alberto Del Rio. The psychology of the bout was sound, with the champion entering the contest with a storyline arm injury, which the devious Del Rio sought to repeatedly exploit by attempting to apply the Cross Armbreaker. ‘The Ultimate Opportunist’ withstood outside interference from the likes of Ricardo Rodriguez and Brodus Clay, thanks to an assist from his buddy, Christian. Edge then nailed Del Rio with his patented Spear to retain his title in a very good match.

The next night on Raw, Edge retired due to a severe neck injury. He would not compete again until the 2020 Royal Rumble match.

Edge had won every single one of his WrestleMania matches when he rocked up to Ford Field, Chicago to compete in the Money in the Bank Ladder Match. That impressive run would not last any longer.

Pitted against Randy Orton, The Hardy Boyz, King Booker, Finlay, Mr Kennedy and CM Punk, Edge, the former winner of the briefcase was a favourite to win. However, the former WWE Champion’s night was to be short lived. Early in the bout, while laid out on a ladder set across the ring apron to the barricade, Jeff Hardy performed a leg drop from another ladder splitting Edge and the ladder he was lying on in half.

It was an incredible spot and ended Edge’s night early. Mr Kennedy won a fantastic match. 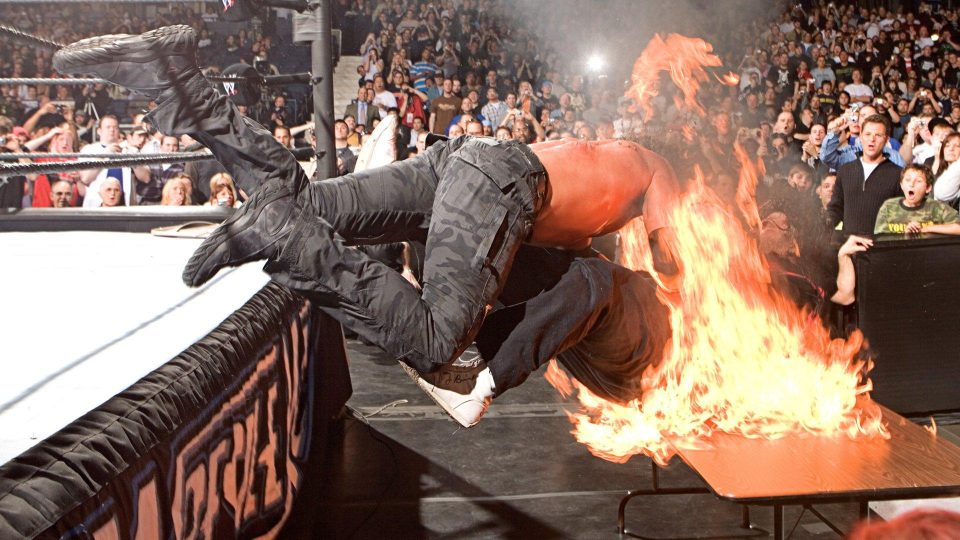 In January 2006, Edge after eight years in the WWE system finally claimed the WWE Championship.

Cashing in his Money in the Bank contract, Edge pinned John Cena after the champion had successfully defended the title in an Elimination Chamber bout minutes earlier. Despite ratings hitting a five year high during The Rated-R Superstar’s title reign, he was relieved of the gold just three weeks later, denying him a WrestleMania World title match with Triple H.

As a concession, Edge was booked in a Hardcore Match with the Hardcore Legend, Mick Foley. Edge delivered a stature enhancing performance as he exchanged brutal weapon shots with Foley in an electrifying battle. The finish was one of the most memorable in WWE history. Edge’s valet, Lita doused a table with lighter fluid and set it ablaze as ‘The Ultimate Opportunist’ Speared Foley through it for the win.

Edge’s headliner credentials were underlined and italicised with this victory and he recaptured the WWE Championship just over two months later.

The first ever Money In The Bank Ladder Match featured a who’s who of 2005’s Raw mid-card; Edge, Shelton Benjamin, Chris Jericho, Chris Benoit, Kane and Christian. All six men were competing for the right to face the WWE Champion at a time of their choosing.

Non-stop innovative ladder spots kept the action moving at an incredible pace. Benoit seemingly had the match won when the dastardly Edge whacked him with a chair. Seconds later, ‘The Rated R Superstar’ scaled the rings to retrieve the briefcase. One of the best matches of the year.

Edge would bide his time and wouldn’t cash in the briefcase for nine months. He relieved John Cena of the WWE Championship at the conclusion of New Year’s Revolution in January 2007. 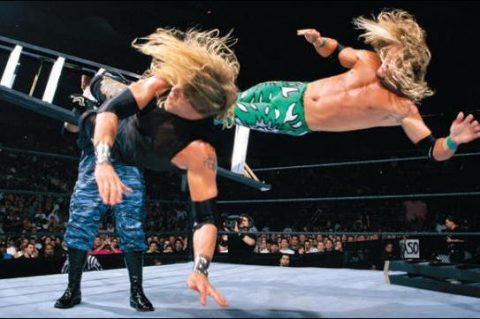 The Ladder Match between Edge & Christian and The Hardy Boyz at No Mercy 1999 was a breakout performance for both teams.

To capitalise on that momentum the young teams were pitted together in another Ladder Match at WrestleMania 2000; a Triangle Ladder Match with Tables specialists, The Dudley Boyz.

The three teams bumped around for each other even before the breath-taking ladder and table spots were introduced. This was a match full of innovation and hungry youthful wrestlers determined to make a name for themselves. The finish came when Christian and Matt Hardy were battling atop a table positioned between two ladders. Edge climbed up and hurled off Hardy, allowing Edge & Christian to claim their first WWF Tag Team title.

Unquestionably the finest match of WrestleMania 2000 and one of the best ever ‘Mania bouts of all time at that point. A 23 minute classic.

The triumvirate of Edge & Christian, The Dudley Boyz and The Hardy Boyz upped the ante once more with the sequel to SummerSlam’s inaugural TLC (Tables, Ladders and Chairs), TLC II at WrestleMania X-7.

The teams delivered crazy stunt after stunt as the participants rattled each other’s brains with chair shots and smashed each other through tables. One of the highlights saw Edge jump off a ladder and Spear Jeff Hardy in mid-air whilst Hardy hung from the title belts suspended above the ring.

Edge & Christian, as they had done at WrestleMania 2000 and SummerSlam 2000 emerged victorious once more, and lifted a then record seventh WWF Tag Team Title.

World Heavyweight Champion, Edge versus The Undertaker was also a battle of the streaks as the champion had never been pinned at WrestleMania himself. Edge’s only prior loss coming in the multi-man Money in the Bank contest the previous year.

Edge looked every bit the threat to The Undertaker’s epic undefeated streak. The match was filled with stunning counters and reversals and a captivating ebb and flow for its 24 minute duration. ‘The Phenom’ ultimately dethroned Edge for the title but the pair’s epic rivalry lasted until the summer.

One of the greatest main events in WrestleMania history.

You can watch all of Edge’s WrestleMania matches exclusively on the WWE Network.