Life can be tough as a wrestler but when you work with the one you love it can help ease the pain of all the bumps and bruises. Here we take a look at every couple currently working in WWE! 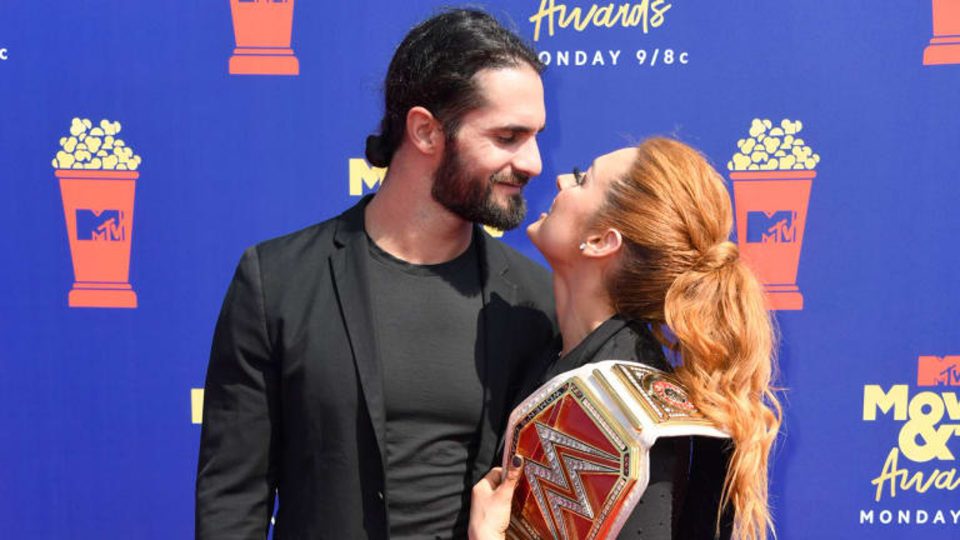 The modern-day power couple of WWE is without a doubt, Becky Lynch and Seth Rollins. Both stars plied their trade in NXT before becoming major players on the WWE’s main roster.

Rollins rose to prominence as a member of The Shield before turning his back on his brothers-in-arms and doing what was best for business by joining The Authority. Seth Rollins perpetrated “the heist of the century” when he cashed in his Money In The Bank briefcase during the WrestleMania 31 main event between Roman Reigns and Brock Lesnar to win his first WWE Championship.

Becky Lynch’s meteoric rise to the top was cemented when she stood tall in the run-up to Survivor Series 2019 despite being bloodied by Nia Jax. Lynch rose her wave of momentum to a win in the women’s Royal Rumble match before she walked away as both Raw and SmackDown Women’s Champion in the first-ever female main event at WrestleMania in 2019.

It was at the beginning of 2019 that Rollins and Lynch began dating and the pair were engaged in August of the same year. The pair were married in June 2021, six months after the birth of the couple’s first child, Roux. 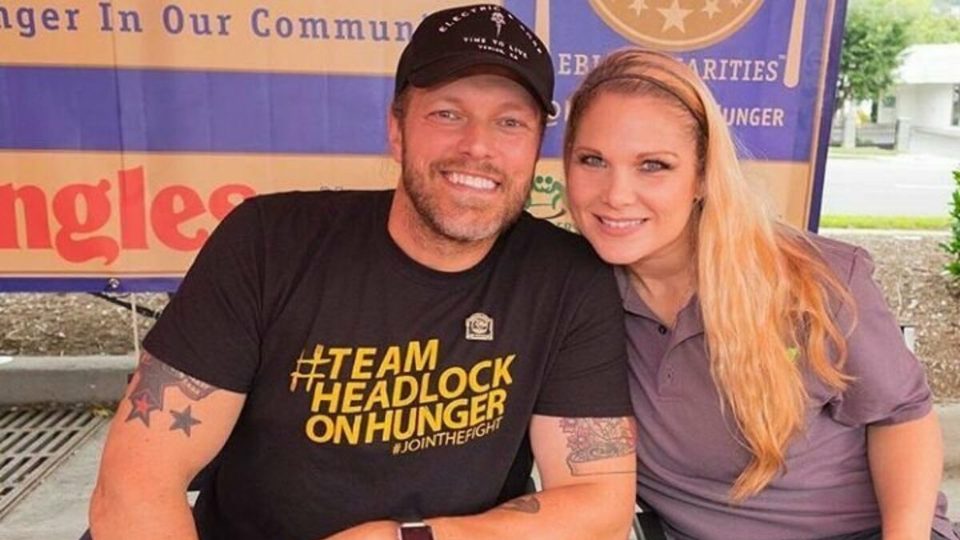 The WWE Hall Of Fame couple got together after Edge first had to step away from wrestling due to injury in 2011. Two years later their first daughter Lyric was born and in May 2016 Phoenix gave birth to their second child Ruby. Later that same year Beth Phoenix and Edge were married.

The pair’s in-ring careers are both iconic in their own right. Edge reinvented tag team wrestling with Christian, The Hardyz, and The Dudleyz during the Attitude Era before embracing his villainous side and going on to become a multiple-time WWE and World Champion. Following his first retirement due to injury in 2011, Edge was inducted into the WWE Hall Of Fame in 2012.

Beth Phoenix dominated the women’s division for several years during the ‘Divas Era.’ The Glamazon held the Divas Title and the WWE Women’s Championship three times during her career which saw her inducted into the WWE Hall Of Fame in 2017.

Edge and Beth Phoenix teamed up at the 2022 Royal Rumble where they won a mixed tag team match against The Miz and Maryse. 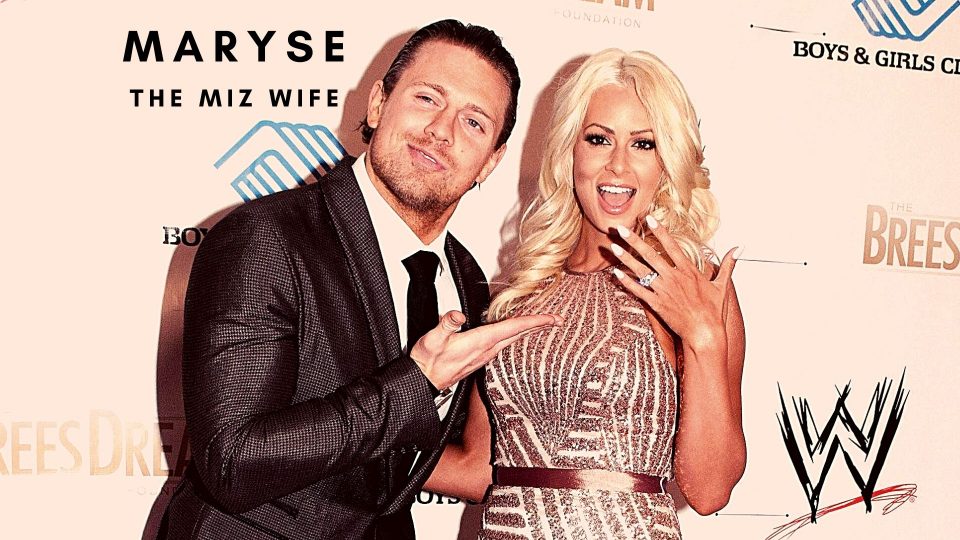 The Miz has done it all in WWE. Tag Team Championships, the United States Championship, eight reigns as Intercontinental Champion, a Money In The Bank briefcase, a WrestleMania main event, and 2 reigns as WWE Champion means The Miz will go down as one of the most successful WWE Superstars of all time. However, his biggest success came in 2014 when he married his long-time girlfriend and fellow WWE star Maryse.

Maryse competed full-time for WWE between 2006 and 2011 after being a part of the Diva Search in 2006. She went on to hold the Divas Championship twice and after several years away returned to WWE by the side of her husband in 2016. The Miz and Maryse have teamed up three times in WWE, losing to John Cena and Nikki Bella at WrestleMania 33 before defeating Brie Bella and Daniel Bryan in September 2018. Their most recent outing saw them defeated at the 2022 Royal Rumble by Edge and Beth Phoenix.

The couple are parents to two daughters with Monroe Sky being born in March 2018 and Madison Jade entering the world in September 2019. 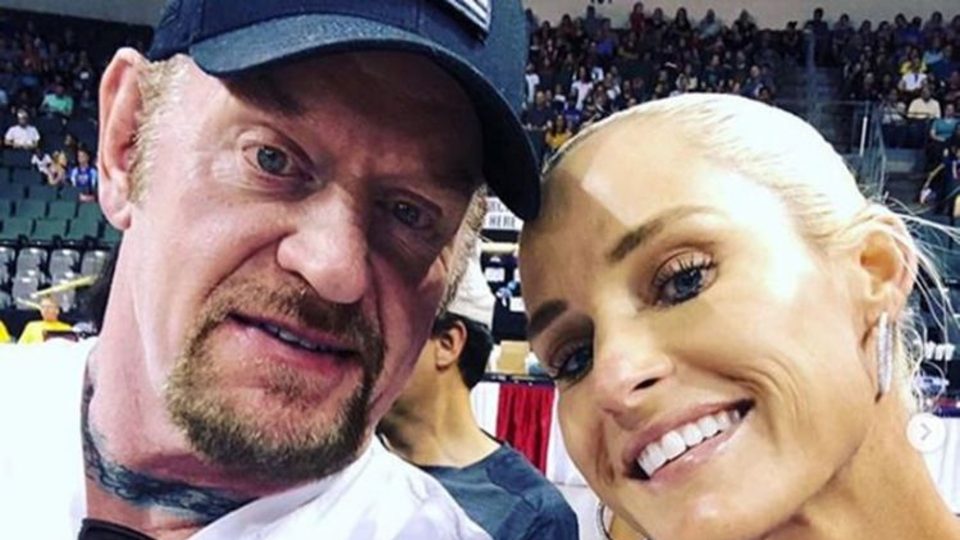 The Undertaker’s WWE career needs no explanation as The Deadman spent thirty years digging holes and taking souls on his way to numerous runs as WWE and World Champion as well as building an unprecedented WrestleMania Streak that will never be bettered. The Phenom will be inducted by WWE Chairman Vince McMahon when he takes his rightful place in the WWE Hall Of Fame in April 2022.

Michelle McCool came to prominence in WWE after taking part in the 2004 Diva Search competition. McCool spent time in developmental before re-emerging on SmackDown in 2006. A two-time Divas Champion and a 2-time WWE Women’s Champion Michelle McCool is perhaps best remembered for the tag team she formed with Layla – LayCool. McCool competed for the first time in 4 years as part of the 2022 Women’s Royal Rumble where she lasted over 20 minutes.

The Undertaker and Michelle McCool were married on June 26th, 2010 and the couple welcomed their first child, a daughter Kaia, into the world in August 2012. 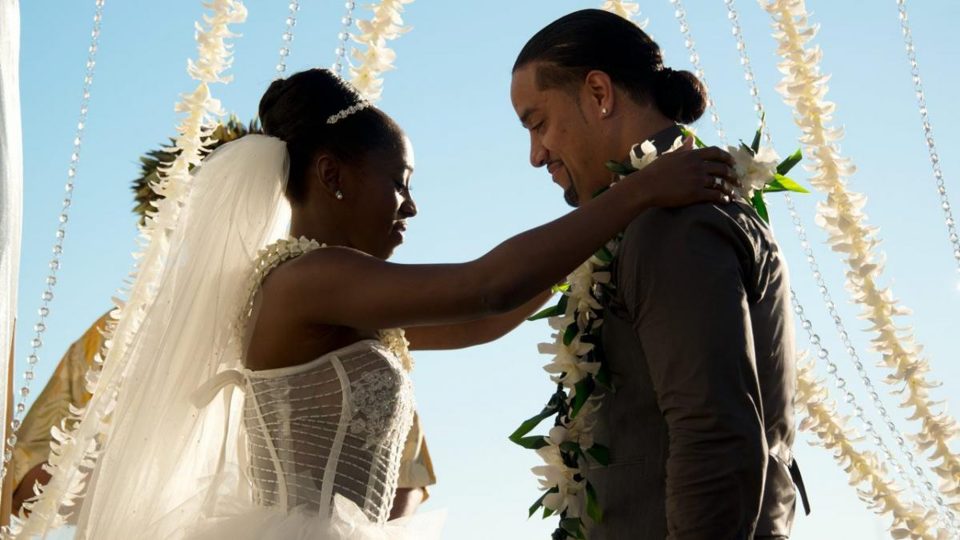 After spending time in developmental and appearing on a season of NXT, Naomi made her on-screen WWE debut in 2012 as one of Brodus Clay’s Funkadactyls.

Over the years Naomi has garnered significant fan support and is a two-time SmackDown Women’s Champion. The second of those title victories came in Naomi’s hometown of Orlando, Florida at WrestleMania 33.

Jimmy Uso alongside brother Jey have dominated the tag team scene in WWE since they debuted in the company in 2010. Since then The Usos have become cornerstones of the tag team scene, holding both the WWE and SmackDown Tag Team Championships several times over the years.

Naomi and Jimmy Uso were married on January 16th, 2014, making Naomi a part of the vaunted Anoa’i wrestling dynasty. 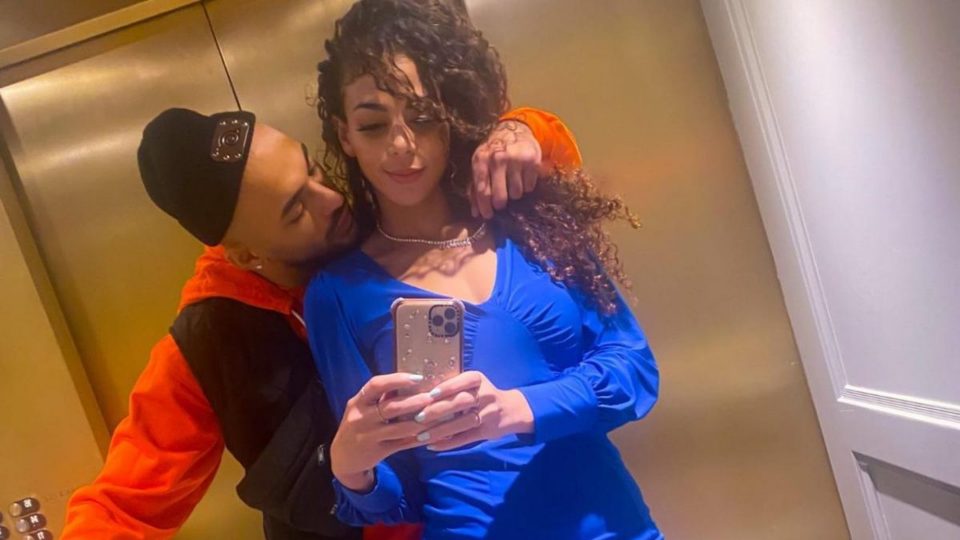 Ricochet burst onto the WWE scene in 2018 after a successful career on the independent scene and in New Japan Pro Wrestling. Ricochet won the North American Championship before being part of the second War Games match under the WWE umbrella when he teamed with Pete Dunne and the War Raiders to defeat The Undisputed ERA.

The high-flying star joined the main roster of WWE in 2019 and since then he has held the US Championship and won the Intercontinental Championship from Sami Zayn on SmackDown in March 2022.

Samantha Irvin joined WWE in April 2021 and currently works as the lead ring announcer on Friday Night SmackDown on FOX. 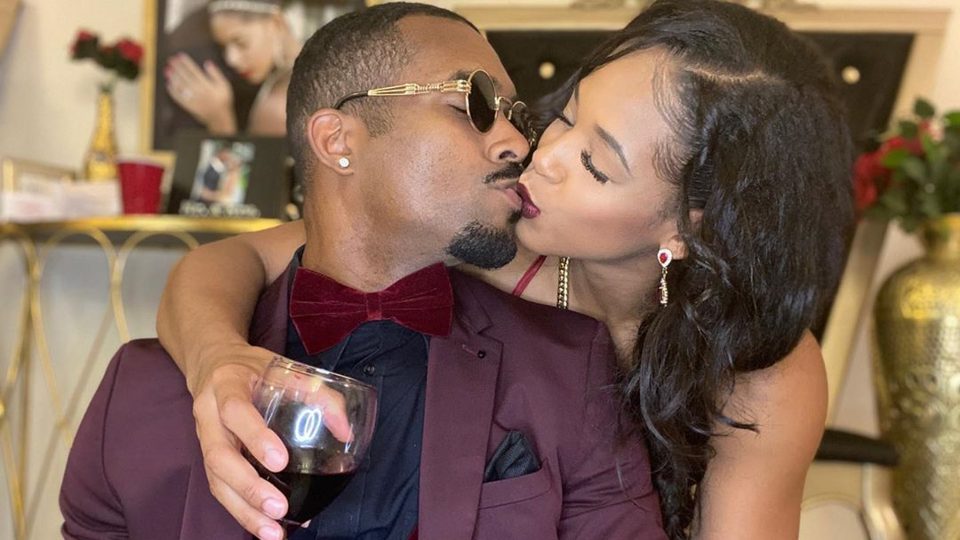 Bianca Belair made her television debut on NXT in May 2017 and The EST of WWE has not looked back. Belair became a key part of the women’s division in the black and gold brand as it rebuilt after the Four Horsewomen era but really came into her own when she graduated onto the main roster.

Belair won the women’s Royal Rumble bout in 2021 and went on to successfully challenge Sasha Banks for the SmackDown Women’s Championship in a historic main event at WrestleMania 37. Bianca Belair lost that title to Becky Lynch in just 26 seconds at SummerSlam later in the year but will look to get a measure of revenge on The Man when they meet for the Raw Women’s Title at WrestleMania 38.

Montez Ford has been teaming with Angelo Dawkins since 2016 and the duo were rechristened as the Street Profits one year later. They are only the second team in history to have captured the NXT, Raw, and SmackDown Tag Team Championships after The Revival – better known as AEW’s FTR.

Ford and Belair were married on June 23rd, 2018, a little over one year after they announced their engagement. 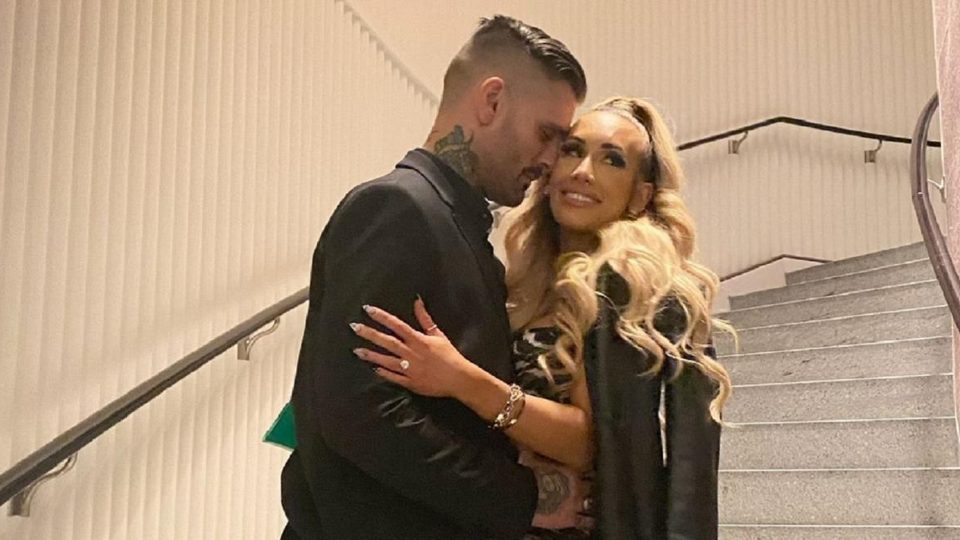 Carmella joined WWE in 2013 after spending time as a cheerleader for the New England Patriots and one year as a Laker Girl for the 2010/11 season. She was soon aligned on-screen with her boyfriend at the time Big Cass and his tag team partner Enzo Amore.

Carmella joined the main roster in 2016, and two years later made history when she won the first-ever women’s Money In The Bank ladder match – with more than a little help from James Ellsworth. Due to the controversial finish of the match, a rematch took place on SmackDown which Carmella won, cementing the fact that ‘Mella is Money.

In April 2018, Carmella cashed in her briefcase to win the SmackDown Women’s Championship for the first time in her career.

Corey Graves is a former NXT Tag Team Champion but was forced to step away from in-ring competition in 2014 due to issues surrounding concussions. Graves joined the broadcast team of NXT before moving to Raw in 2016. Since then Corey Graves has been a mainstay of the commentary table on both Raw and SmackDown but currently finds himself as part of WWE’s red brand, sitting at the announce desk every Monday with Jimmy Smith and Byron Saxton.

Corey Graves and Carmella’s relationship was profiled during the ninth season of Total Divas in 2019. The pair launched a podcast together in 2020 and in 2022 launched their own YouTube series, Corey and Carmella, following their engagement in October 2021. 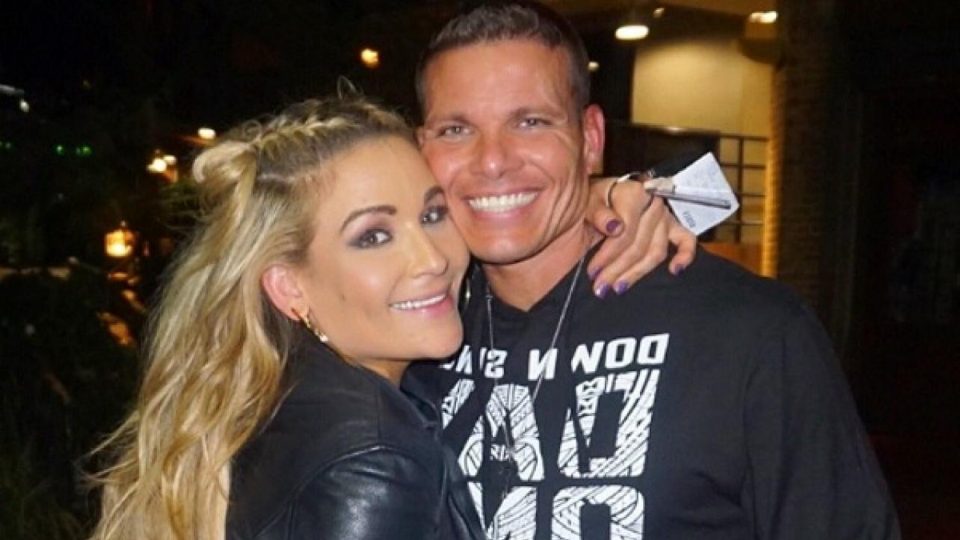 Natalya and Tyson Kidd’s WWE affiliation dates back to their days in the developmental system where both were a part of the Next Generation Hart Foundation in Florida Championship Wrestling but their relationship stretches back even further.

Natalie Neidhart and TJ Wilson met when Natalya was just 12 when Wilson began training at the infamous Hart Family Dungeon. The pair began dating in 2001 and both made the leap to WWE in the mid-2000s.

Known in the company as Tyson Kidd, Wilson made his on-screen debut for WWE in 2009 with Natalya acting as his manager. The pair formed The Hart Dynasty with David Hart Smith – son of the British Bulldog – and were involved in Bret Hart’s return to WWE and his match with Vince McMahon at WrestleMania 26.

Natalya has held the Divas, SmackDown, and WWE Women’s Tag Team Championships throughout a career that has seen her notch up more matches as a female superstar than anyone else. Tyson Kidd’s success in the company came in the tag team ranks, holding gold both with Smith and Cesaro.

Kidd’s wrestling career was cut short in 2015 when he suffered a spinal cord injury in a match with Samoa Joe. He has worked for WWE as a producer since 2017 and is noted for his work with the women’s roster in the company. 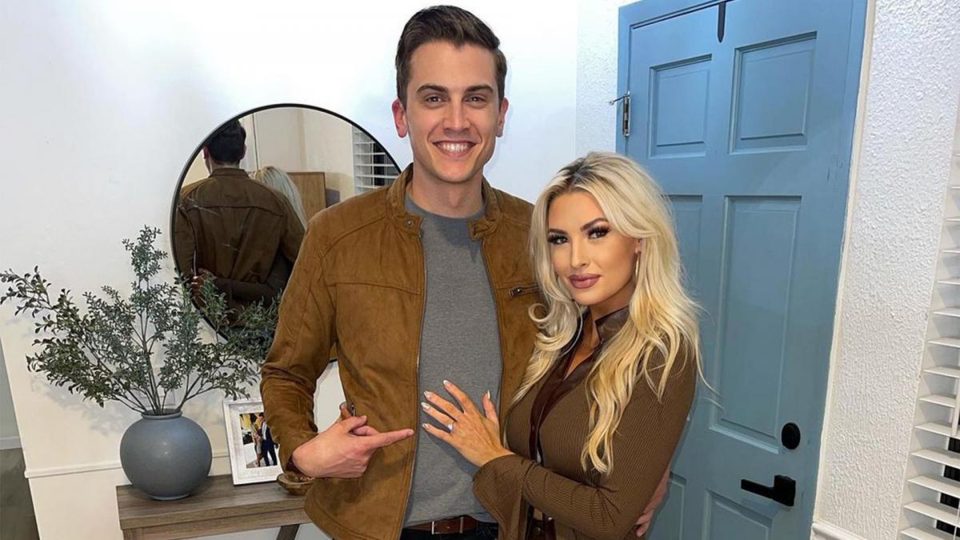 Vic Joseph has been the lead voice at the NXT announce table alongside WWE Hall Of Famer Beth Phoenix and former Intercontinental Champion Wade Barrett since taking over the role from Mauro Ranallo in August 2020. This followed spells as the play-by-play announcer on Raw and NXT UK.

Mckenzie Mitchell joined WWE in September 2019 following a three-year spell with IMPACT Wrestling. Mitchell took over as backstage interviewer on NXT following in the footsteps of Cathy Kelley and Renee Young.

Mitchell shared the happy news of the couple’s engagement on social media in November 2021, posting a photo of her and Joseph with the caption: 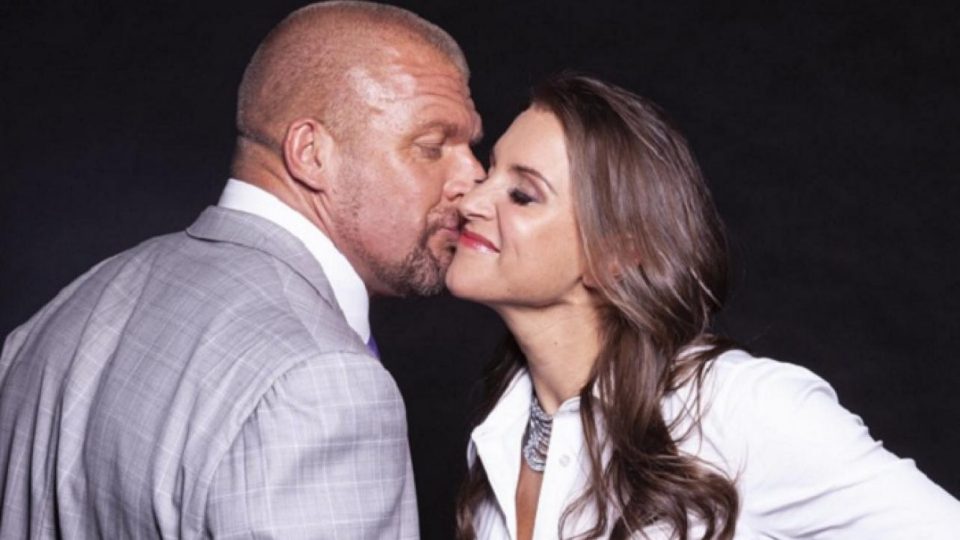 The power couple have come a long way from Triple H having Stephanie drugged so he could marry her while unconscious at a drive-thru wedding chapel in Las Vegas. Sin City indeed.

While that might have just been entertainment, the reality is that Paul Levesque and Stephanie McMahon have had a rock-solid relationship since they began dating in the early 2000s. The pair were married on October 25th, 2003, and have since gone on to have three daughters. Aurora Rose was born in 2006 with Murphy Claire being welcomed into the world in 2008, and Vaughn Evelyn completing their family two years later.

Although speculation about Triple H’s corporate role has run rampant following the major changes in NXT – the brand that he founded – and his own health concerns, he remains WWE’s Executive Vice President, Global Talent Strategy & Development.

WWE is, of course, in Stephanie McMahon’s blood, and as the company’s Chief Brand Officer she has helped oversee the business seal billion-dollar deals in recent years with FOX and NBC Universal.