1994 marked a significant improvement for the WWF in contrast to it’s rather lacklustre output in 1993. The Federation had finally embraced Bret ‘Hitman’ Hart as it’s figurehead and the company began to push the boundaries with it’s inaugural Ladder Match on pay-per-view at WrestleMania X.

This was the final year the WWF produced five pay-per-view supercards. All subsequent years would see their calendar exponentially increased.

This feature ranks every single 1994 pay-per-view event from worst to best!

Although 1994 was an excellent year for the WWF on pay-per-view, it’s final super-card of the year massively disappointed.

This led to Bret’s younger brother, Owen with whom he had been feuding all year, nefariously convincing his mother to throw in the towel on Bret’s behalf. Therefore Backlund was crowned champion for the second time. A reign that lasted a mere three days, before he dropped the gold to Diesel in eight seconds on a house show.

Elsewhere, The Undertaker brought his long-running and tiresome feud with Yokozuna to a conclusion in a passable Casket Match, which was at least superior to their awful outing at Royal Rumble. Film star and renowned tough guy, Chuck Norris served as the ringside enforcer to counteract the boatloads of outside interference that marred their previous contest. ‘The Phenom’ won to draw a line under their dispute.

Guts and Glory (Lex Luger, Adam Bomb, Mabel, and The Smoking Gunns) fell to The Million Dollar Team (Tatanka, Bam Bam Bigelow, The Heavenly Bodies, and King Kong Bundy) in a match which started with good energy but sagged towards the end when the bout’s best workers were eliminated. Bundy last ejected Luger and survived along with Bigelow.

The trigger for the long awaited break-up between Diesel and Shawn Michaels was finally pulled at Survivor Series. It occurred in the contest pitting The Bad Guys (Razor Ramon, 1-2-3 Kid, The British Bulldog and The Headshrinkers) versus The Teamsters (Shawn Michaels, Diesel, Jeff Jarrett, Jim Neidhart, and Owen Hart) in the only good match on the show.

Razor found himself 5-1 down, but as Diesel attempted to finish off the Intercontinental Champion, Michaels accidentally super kicked him, which drew an angry response from ‘Big Daddy Cool.’ That led to Diesel chasing Michaels out of the ring as the rest of the heel team followed. Strangely, this led to the whole of the squad being counted out, despite the fact only Diesel was legal. Razor was the sole survivor.

With only one good match, which had a lame ending and five woeful ones, the 1994 Survivor Series was one of the worst events the Federation had every produced at that point in time. 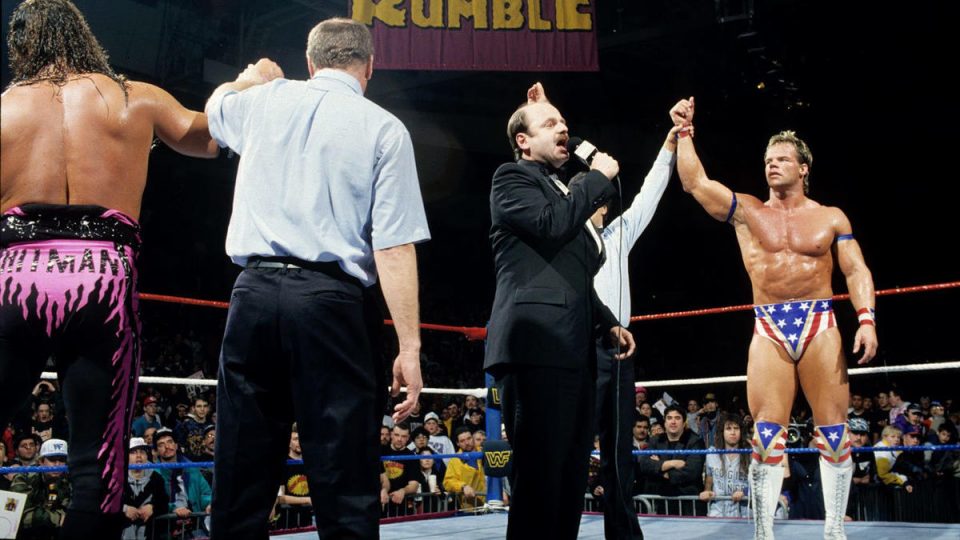 The Royal Rumble boasted one terrific match and a large serving of dross. Tatanka versus Bam Bam Bigelow and Razor Ramon versus IRS were as dull as they sound.

The WWF Championship Casket Match between champion, Yokozuna and The Undertaker was a plodding bore that only sparked into life when 10 members of the heel roster battered the ‘Deadman’ senseless. Yokozuna retained when the dastardly bad guys shoved ‘Taker into the casket. What happened next was one of the most embarrassing and senseless angles in company history.

The casket began billowing green smoke and ‘The Phenom’ suddenly appeared on the big screen, supposedly from inside the coffin. After rambling about how he will not rest in peace, the ‘Deadman’ apparently ‘died.’ Then a shadowy figure, which the fans were supposed to believe was The Undertaker levitating out of the casket but was actually Marty Jannetty on wires, ascended to ‘Heaven.’ Awful, awful match and an even worse post-match angle.

The only bright spot on the card was the Tag Team Title bout pitting champions, The Quebecers against brothers, Bret and Owen Hart. In a gripping battle, Bret was the face in peril as the heel squad double teamed him and targeted his leg. On a bad wheel, Bret refused to tag in his brother and attempted to win the match himself with his patented Sharpshooter.

However, this backfired on him and he collapsed, causing the referee to rule he couldn’t continue and award the match to the champions. Even better than the match was the post-match angle, which couldn’t have been more different than The Undertaker embarrassment.

The Royal Rumble match-up itself was a let-down. Although, an improvement on it’s predecessor, the bout too often found itself crowded out with participants, which meant an incessant amount of kicking, punching and grappling by the ropes. The contest was notable for the star-making performance of Diesel. Shawn Michaels’s bodyguard dumped out seven men, turning himself into a bon-a-fide superstar in one night.

The only two realistic winners were Lex Luger and Bret Hart. Luger entered his usual listless performance and Hart continued to sell his leg injury, which meant neither did much of interest in the bout. The pair eliminated each other and the referees could not determine whose feet touched last. Therefore, Luger and Hart were announced as co-winners, both earning a crack at the WWF Championship at WrestleMania X.

With only one good match and one of the worst angles in company history, the 1994 Royal Rumble was a disappointing event to put it mildly.

The 1994 King of the Ring couldn’t hold a candle to the previous year’s event due to not one of the seven King of the Ring bouts lasted longer than eight minutes. Despite that handicap, Owen Hart managed to contest a minor classic with The 1-2-3 Kid in one of the semi-final bouts, in quite possibly the finest four minute match-up of all time.

Owen defeated Razor Ramon in a disappointing match to lift the King of the Ring crown, with a little help from his brother-in-law, Jim Neidhart, emulating his brother Bret’s victory, the previous year. He would declare himself the ‘King of Hart’s’ which set up his WWF Championship feud with his brother over the summer and autumn months.

On the subject of Bret, he clashed with Intercontinental Champion, Diesel with the WWF Championship on the line. Hart carried Diesel to a very good match-up which ended when Neidhart interfered on Bret’s behalf to cause a disqualification victory for ‘Big Daddy Cool.’

The Headshrinkers bested Yokozuna and Crush in a contest for the Tag Team Titles, in a passable encounter, that was let down by numerous sloppy exchanges.

Finally, ‘Rowdy’ Roddy Piper beat Jerry ‘The King’ Lawler in the main event, which made a mockery of the WWF’s ‘New Generation’ campaign. The bout between the 40-year-old Piper and the 44-year-old Lawler was an embarrassment. It suggested that the company didn’t have faith in it’s thirty something stars such as Bret and Owen Hart and Diesel to draw buys. As it turned out, the washed up legends in Piper and Lawler didn’t either as the card pulled a paltry 185,000 buys, the Fed’s lowest of the year.

SummerSlam 1994 boasted a superb Cage Match with the WWF Championship on the line. Champion, Bret Hart put his gold on the line against his younger brother, Owen in the culmination of their classic feud. At the end of an epic 32 minute match-up, Bret escaped the cage after a super heated, energetic and enthralling battle. Probably the best blue barred cage encounter the company ever produced.

Following the decision, Owen and Jim Neidhart tossed Bret back into the cage, locked the door and beat the exhausted champion relentlessly. This led to a returning, British Bulldog climbing the cage and making the save for his brother-in-law. Great match and fantastic post-match angle.

Also of note, was Razor Ramon’s Intercontinental Title victory over Diesel. An enjoyable encounter, one of the best matches either man had in the WWF, ended when Diesel’s buddy, Shawn Michaels accidentally nailed ‘Big Daddy Cool’ with Sweet Chin Music. Razor covered for the pin and his second IC Title.

Alundra Blayze bested Bull Nakano in a worthwhile effort, which was unlike anything the the WWF fans had ever seen from women in the promotion before. The pair busted out moves usually only seen in the Orient and thrilled the Chicago crowd. Blayze hit Nakano with a Bridging German Suplex for the win. Super match-up.

The rest of the card was entirely miss-able. Tatanka versus Lex Luger was a complete dud. Likewise, Mabel versus Jeff Jarrett. The Headshrinkers against Bam Bam Bigelow and IRS was boring and ended in a cheap disqualification.

Finally, the show was headlined by the unforgettable spectacle of Undertaker versus Undertaker. The ‘Phenom’ had been absent from the Federation following the embarrassing angle at Royal Rumble. Earlier, in the summer, Ted DiBiase, who had originally brought ‘Taker to the WWF in 1990, claimed he had brought the ‘Deadman’ back to the promotion.

However, The Undertaker’s long-time manager, Paul Bearer claimed DiBiase’s ‘Taker was a fake and the real ‘Deadman’ would return at SummerSlam. That he did, and the two Undertaker’s met in an abysmal, slow motion contest that mercifully only lasted nine minutes. However, it felt like it lasted 30. Making matters worse, the Chicago crowd struggled to differentiate the two Undertaker’s so were unsure how to respond. The original Undertaker pinned the fake following a Tombstone Piledriver.

With one classic match and two very good ones, SummerSlam was the second best show of the year. It was only bettered by one of the greatest events in WWF history.

The tenth annual WrestleMania was the WWF’s best ever super-card at that point in time. Boasting two five star classics, it is still fondly remembered almost three decades on.

Owen Hart beat his older brother, Bret in what remains the greatest opening match in Federation history. Owen, who had long lived in his brother’s shadow stunned the New York crowd, when he matched his more famous brother, move for move in a technical mat classic.

The other all time great match-up saw Razor Ramon defend the Intercontinental Title against former champion, Shawn Michaels in the first WWF Ladder Match on pay-per-view. Utilising the ladder as a weapon, in a succession of innovative, never seen before spots, the contest thrilled Madison Square Garden for 19 minutes, in a bout which scooped numerous match of the year awards in 1994.

Elsewhere, ‘Macho Man’ Randy Savage in his final WWF in-ring appearance bested Crush in an exciting Falls Count Anywhere battle. The rules of this contest were curious in that following a pin-fall outside of the ring, victory needed to be earned by the pinned participant failing to reach the ring after a 10 count. Savage pinned Crush then hung him upside down from some scaffolding to earn the victory. Savage, who had been utilised primarily as a commentator since early 1993, wished to continue his in-ring career and received a big money offer from WCW to do exactly that. He left the WWF for WCW in December that year and never returned.

Lex Luger’s reputation as a choker in World Title matches continued as he was disqualified by special referee, Mr. Perfect in his title bout with Yokozuna once more. His planned feud with Perfect never happened, as Perfect left the company shortly afterwards.

Bret Hart succeeded where Luger had failed and bested Yokozuna to earn his second World crown in a decent battle in the show’s headliner. A huge victory celebration followed as the faces hoisted the new champion aloft as Owen looked on jealously in the aisleway. The company segued seamlessly into it’s next top line feud.

WrestleMania X was the highlight of an excellent 1994 for the WWF.

You can watch all of these events exclusively on the WWE Network.