1993 saw the WWF add a fifth event to it’s annual pay-per-view calendar. That show was King of the Ring and was booked in June, sandwiched between WrestleMania in April and SummerSlam in August.

All in all, 1993 was a disappointing year for the Federation creatively and at the box office. This feature ranks all five of the company’s events that year from worst to best! 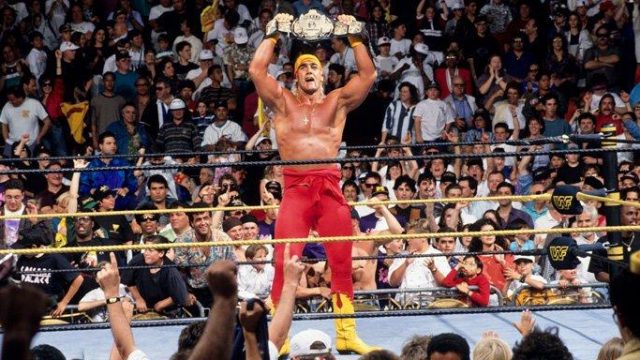 WrestleMania IX is widely regarded as the worst WrestleMania of all time. That reputation is well deserved. ‘Mania IX was abysmal from top to bottom with absolutely zero redeeming features.

The Undertaker versus Giant Gonzalez was a calamity. Gonzalez, formely El Gigante in WCW was absolutely clueless and ‘The Phenom’ in this era didn’t have good matches with anyone, which meant the booking of this bout must have been someone’s idea of a joke.

Doink The Clown versus Crush was only notable for the twin Doink’s angle at the finish. The action leading up to that point was dross.

Bob Backlund versus Razor Ramon and Lex Luger versus Mr Perfect were both as exciting as watching paint dry.

Even Shawn Michaels could not save the show. His bout against Tatanka was also completely dull and tedious.

The only decent match on the undercard was the tag team encounter pitting The Headshrinkers against The Steiners, which thankfully contained some worthwhile action.

The most hyped matches on the card also underdelivered. Money Inc. retained their Tag Team Title against the supposed “dream team” of Hulk Hogan and Brutus Beefcake in a paint by numbers affair and the headliner pitting WWF Champion Bret Hart against the gargantuan Yokozuna was pitiful.

What’s worse, after Hart lost the belt on a complete screwjob, the new champion challenged Hogan to an impromptu match-up. Mere seconds later and ‘The Hulkster’ was the new and five-time WWF Champion.

With only one decent match and eight utterly dreadful ones, WrestleMania IX is a contender for worst supercard ever. It is easily the Federation’s worst of 1993.

The 1993 Survivor Series was superior to WrestleMania IX, but was still lacklustre in almost every conceivable way.

The show solely consisted of tag team contests; the Smoky Mountain Tag Team Titles were on the line and the rest of the card was rounded out by classic Survivor Series eight-man tag team bouts.

The Smoky Mountain Tag Team Title match was the highlight of the show. The Heavenly Bodies upended The Rock ‘n’ Roll Express to claim the belts in a hugely entertaining old school type encounter.

Elsewhere, Team Razor versus Team IRS was a lively opener which saw Team Razor pick up the victory when Marty Jannetty and The 1-2-3 Kid survived.

The heavily hyped match-up pitting the Hart family against Jerry Lawler and his Knights had to be scrapped when a week prior to the show, Lawler was indicted for raping a 15-year old girl (charges which were later dropped). This led to Shawn Michaels replacing Lawler, but with no storyline reason for ‘HBK’ to be involved, the match was bereft of heat and suffered as a result. It was only notable for Owen Hart’s tantrum post-match which would later set up his heel turn on elder brother, Bret in 1994.

The Four Doink’s (Men on Mission and The Bushwhackers dressed as clowns) versus Team Bam Bam was an unfunny comedy match, which is a contender for worst match of all time. It was certainly the low point of 1993.

The headliner was also dreadful. The All Americans (Lex Luger, The Undertaker and The Steiners bested The Foreign Fanatics (Crush, Yokozuna, Ludvig Borga and Jacques Rougeau). Luger last eliminated Borga to win after a tedious, overlong, 29 minute bore.

Survivor Series ended the Federation’s 1993 super-card output with a whimper. 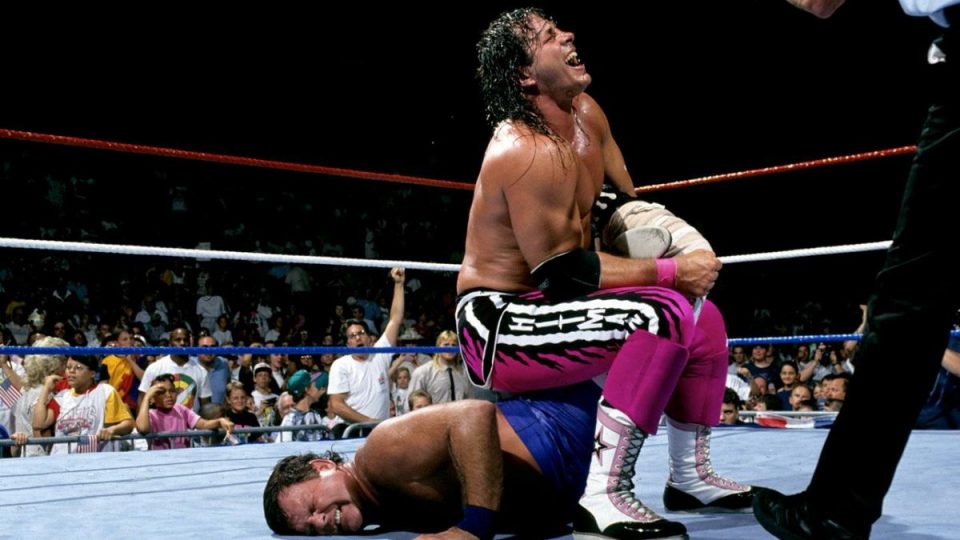 The sixth annual SummerSlam was replete with non-finishes which marred a show which in terms of action was more than adequate.

Bret Hart was set to clash with Jerry Lawler, but was forced by ‘The King’ to clash with his “court jester” Doink instead. Hart and Doink contested a spirited bout which ended when Lawler blasted Hart for the disqualification. Lawler then bested Hart by disqualification in a heated match when ‘The Hitman’ was DQ’d for not releasing his Sharpshooter on his foe. All angle, with plenty of action. This was the hottest thing on the show.

The Steiners turned back the challenge of The Heavenly Bodies in a hard hitting bout which was well worth the effort. In another tag team match-up worthy of praise, The Smoking Gunns and Tatanka defeated The Headshrinkers and Bam Bam Bigelow in a fast paced battle. IRS defeated The 1-2-3 Kid in a decent effort, that only lasted six minutes.

The rest of the card was varying degrees of poor. The Intercontinental Title match between Shawn Michaels and Mr Perfect seemed destined to be a classic. However, the pair did not gel together and the contest was a tedious bore. The Undertaker ended Giant Gonzalez’s dire WWF career in another abysmal outing between the pair. Ted DiBiase’s six year Federation tenure ended in a whimper in a forgettable contest with Razor Ramon. Ludvig Borga, the WWF’s new project for a high card heel spot squashed Marty Jannetty in a total dud.

Finally, Lex Luger challenged the mammoth Yokozuna for the WWF Championship in the headliner. Luger had been abruptly turned face and repackaged as an All-American hero on July 4, when he body slammed the WWF Champion on the deck of the USS Intrepid. The smug, mechanical and inherently unlikable Luger did not connect with the WWF audience in the manner required to be the company’s figurehead. Recognising this, the company got cold feet about putting the strap on him. He won the match, but only by count-out, which meant he did not capture the belt. That finish was a let-down.

The WWF expected Luger’s misfortune would create a greater groundswell of support amongst fans in his quest for the gold, culminating in him defeating Yokozuna at WrestleMania X. As it happened, the WWF fanbase chose Hart as their hero and in early 1994 he would supplant Luger as ‘The Man’ in the Federation. Luger would never win the WWF Title.

The 1993 Royal Rumble had a hugely entertaining undercard but was let down by the actual 30-man Royal Rumble contest itself.

The titular bout unlike 1992’s effort was sadly bereft of star power; Max Moon, Damien Demento and The Berzerker were three of the participants. The biggest names in the bout were Yokozuna, ‘Macho Man’ Randy Savage, Ric Flair, The Undertaker, Mr Perfect and Bob Backlund. Yokozuna won by last eliminating Savage to win the bout and earn a crack at the WWF Championship at WrestleMania IX.

Underneath however, the card was excellent. Bret Hart successfully defended his WWF Title against Razor Ramon in a thoroughly entertaining battle. Shawn Michaels turned back the challenge of his former Rocker partner, Marty Jannetty in a phenomenal, fast paced match-up which was an early contender for Match of the Year in 1993.

The newly signed from WCW, Steiner Brothers bested The Beverly Brothers in an impressive encounter and finally the recently re-signed, Bam Bam Bigelow defeated The Big Boss Man in an passable bout.

The Royal Rumble was only surpassed by one WWF super-card in 1993. 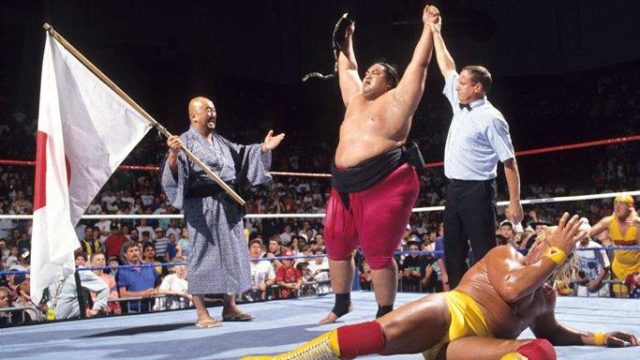 The first ever King of the Ring pay-per-view was highlighted by Bret Hart’s victory in the King of the Ring tournament. ‘The Hitman’ contested three blinding battles with Razor Ramon, Mr Perfect and finally Bam Bam Bigelow to lift the crown.

Post-match, Hart was assaulted by Memphis legend, Jerry ‘The King’ Lawler who took exception to Hart adopting the ‘King’ moniker, which set up a heated feud that lasted throughout the year.

The other tournament bouts were all miss-able however.

Hulk Hogan lost the WWF Championship to Yokozuna in his final match on WWF television for nine years. The bout was a paint by numbers Hogan contest, but was memorable for the colossal screwjob finish. Harvey Wippleman, posing as a cameraman launched a fireball in ‘The Hulkster’s’ face, which distracted him for long enough to enable Yokozuna to nail a huge leg-drop for the pin-fall victory.

Rounding out the card, the Intercontinental Title match between Shawn Michaels and Crush and the eight-man tag team bout pitting The Steiners and The Smoking Gunns against Money Inc. and The Headshrinkers were only passable.

However, the 1993 King of the Ring was all about the titular tournament and Bret Hart ensured that it was one to remember.