After a difficult year in 1991, the WWF bounced back in style in 1992 with a new focus on younger, more technically proficient talent. This led to superior match quality in the mid-card and main event positions and some choice offerings to the public on pay-per-view.

Which pay-per-view was the Federation’s best of 1992? This feature ranks them all!

Flair who entered number three, lasted a then-record 60 minutes and eliminated five opponents to win the bout and the vacant WWF Championship which was at stake in the contest.

The undercard was regrettably a dud and could not live up to the main event. The Beverly Brothers versus The Bushwhackers was as awful as it sounds and The Legion of Doom versus The Natural Disasters wasn’t much better.

Roddy Piper won his first and only title in the Federation, when he captured the Intercontinental Title from The Mountie in a colossal bore.

The only bright spot on the undercard was the opener which pitted The New Foundation (Owen Hart and Jim Neidhart) against The Orient Express in an entertaining 17 minute contest, which was highlighted by Owen’s high flying offence and Neidhart’s power moves. The Orient Express made the babyfaces look like a million bucks with their selling. The bout lasted a tad too long but was a decent effort nonetheless.

However, the bad on this show was so terrible that it dragged down the pay-per-view from being an all time classic. Everyone remembers the ‘Rumble bout itself though and for good reason. 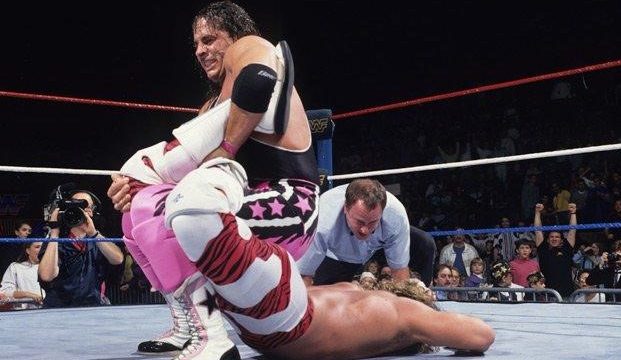 The 1992 Survivor Series moved away from the traditional format of teams of four or five battling in huge tag team attractions. In fact, there was only one Survivor Series style eight-man tag team encounter on the eight match card. That pitted The Natural Disasters and The Nasty Boys versus Money Inc. and The Beverly Brothers in a match that no-one will want to watch twice.

‘Macho Man’ Randy Savage teamed with Mr Perfect, who returned to action after more than a year on the shelf, against Ric Flair and Razor Ramon (making his WWF pay-per-view debut) in a choice tag team contest which was marred slightly by a cheap disqualification finish.

The Undertaker squashed Kamala in a Casket Match (billed on this show as a Coffin Match) which was the typical, plodding ‘Taker bout from this era.

The Big Boss Man overcame Nailz in a heated affair, that was a tad short at only five minutes in duration.

New WWF signing Yokozuna destroyed Virgil in an eye catching three minutes to kickstart the monster push which would lead him to the WWF Championship five months later. There was nothing else of note on the undercard.

The highlight of the show was undoubtedly the headliner which pitted newly crowned WWF Champion, Bret ‘Hitman’ Hart versus Intercontinental Champion, Shawn Michaels, with Hart’s WWF Title at stake.

Hart and Michaels contested an expertly paced, 27 minute, technical masterclass. Hart forced ‘The Heartbreak Kid’ to submit with his patented Sharpshooter submission hold. Their match-up was the clear highlight of the show. 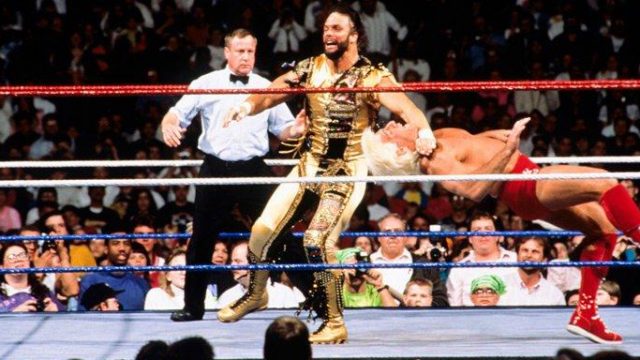 Savage/Flair delivered whilst Hogan/Justice was a calamity. Savage versus Flair was supported by an intense storyline in which Flair claimed to have dated Savage’s on-screen squeeze (and real life wife) Miss Elizabeth, before she was involved with ‘The Macho Man.’ Flair hammed it up as only he could in the lead up to the show; “she was mine before she was yours, Randy.” On the night, Savage dethroned Flair to capture his second WWF Championship in an incredibly heated bout featuring intense brawling and smooth offensive transitions throughout. One of the best matches of 1992.

Almost as good was the Intercontinental Championship battle between champion, ‘Rowdy’ Roddy Piper and his challenger, former titleholder, Bret ‘Hitman’ Hart. In possibly Piper’s finest ever match, he and Hart constructed a logical, heated and hugely enthralling contest. Piper teased smashed Hart with the ring bell but eschewed it in favour of his patented sleeper hold. However, that would prove the champion’s undoing as Hart managed to push his feet off the turnbuckles and flip Piper over, pinning his shoulders to the mat. A blistering 14 minute classic.

The Undertaker squashed Jake Roberts to blow off their long running feud. The bout was better than most ‘Taker bouts of this era and sensibly was only six minutes long. This would be Roberts’s final WWF match in four years.

Shawn Michaels bested veteran Tito Santana in a decent opener, which was notable for being ‘The Heartbreak Kid’s’ first major singles outing on pay-per-view.

The rest of the undercard was rushed and failed to leave a lasting impression.

Finally, the headliner pitted ‘The Hulkster’ against Justice in a match notable for all the things that went awry. Justice kicked out of Hogan’s leg drop when Harvey Wippleman or Papa Shango or both were late running interference. The referee then disqualified Justice for whatever Wippleman and Shango were supposed to have done, but didn’t. The heels then attacked Hogan until The Ultimate Warrior hit the ring in a surprise return. Warrior had not been seen in the WWF since SummerSlam 1991 and had lost so much muscle mass since he had last appeared in public, due to the Federation’s new stringent drug testing policy, that most fans believed he was an imposter. Therefore, the pop and visual of Hogan and Warrior clearing the ring was not as significant as it should have been.

Despite it’s complete mess of a climax, WrestleMania VIII was still a worthwhile show with two bonafide classics on the undercard.

The 1992 SummerSlam famously hailed from the old Wembley Stadium, in London, England. The event was originally scheduled to take place at the Capital Centre in Landover, Maryland in the States, but was switched to allow the WWF to capitalise on it’s growing fandom in the United Kingdom.

In a logical move, the Federation booked English wrestler, The British Bulldog, Davey Boy Smith against Intercontinental Champion, Bret ‘Hitman’ Hart in the main event. The crowd noise was deafening as Hart and Bulldog contested an epic 26 minute technical stunner, which even three decades on, remains the finest SummerSlam match of all time. The Bulldog reversed a sunset flip and sat down on Hart pinning his shoulders to the canvas to earn the three count and the Intercontinental Championship.

The WWF Championship bout paired WWF Champion, ‘Macho Man’ Randy Savage with The Ultimate Warrior in a rematch of their WrestleMania VII classic. Incredibly, Savage and Warrior were able to repeat the quality of their earlier bout with a well constructed match-up. The crowd heat was off the charts and both participants sold each other’s moves as if they have been ran over by a tank. Warrior won by countout after Savage elbow dropped the interfering Ric Flair outside the ring but was met by a steel chair for his trouble. The finish to this bout led to a title match between Savage and Flair a few days later in which ‘The Nature Boy’ regained the belt.

The rest of the undercard was fairly underwhelming. Crush versus Repo Man, Nailz versus Virgil and The Undertaker versus Kamala were hardly must-see attractions. The lone highlight amongst the sea of mediocrity on the undercard was the match pitting Shawn Michaels against Rick Martel, which owing to the pair’s narcissism, had the stipulation that strikes to the face were banned, which led to some fun exchanges.

SummerSlam 1992 was an event of two matches. Fortunately, those two matches were bonafide classics, which means this card was the WWF’s finest of the year.

You can watch all of these events exclusively on the WWE Network.