1992 was a tumultuous year for WCW behind the scenes. The company went through three different head bookers in Kip Frey, Bill Watts and Ole Anderson and as such struggled to carve out a clear identity. That being said, the company’s output was much improved after a calamitous 1991.

This led to their supercard output throughout the year being noticeably uneven. WCW promoted some fine pay-per-views as well as some duds. This feature looks back on all seven of WCW’s 1992 pay-per-views and ranks each one!

Halloween Havoc was built around one match; the main event. Billed as “spin the wheel, make the deal”, the bout saw Jake Roberts take on Sting in a match where a spin of a wheel decided the stipulation. Bafflingly, WCW elected to choose the least interesting contest imaginable; a Coal Miner’s Glove match.

Sting bested Roberts in a complete dud of a contest, bereft of heat. The finish was an odd one too. After Sting blasted Roberts with the glove, it somehow caused Roberts’s own snake to bite him. The Philadelphia crowd were not impressed with that ending or the lacklustre 10 minutes of action that preceded it.

Ron Simmons versus The Barbarian and Rick Rude versus Masahiro Chono stunk out The Philadelphia Civic Center in basic, interminable, overlong bores.

Vader squashed Nikita Koloff in a decent squash, that nevertheless felt nothing like a pay-per-view contest.

There was some decent action on the undercard courtesy of Ricky Steamboat and Brian Pillman who fought at a furious pace with plenty of back and forth action. Another bright spot saw Barry Windham and Dustin Rhodes battle to a time limit draw with the team of Stunning Steve Austin and Steve Williams in an entertaining bout filled with exciting near falls. However, at 30 minutes in length, it would have benefitted from being five or 10 minutes shorter.

All in all, Halloween Havoc was a colossal disappointment. With only two decent bouts and plenty of duds, this was undoubtedly WCW’s worst event of 1992. 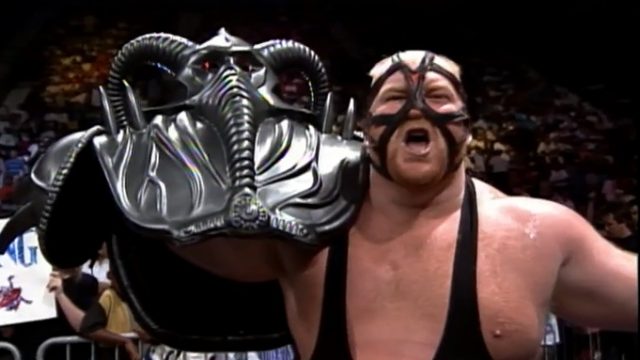 The 1992 Great American Bash was dominated by an interminable tag team tournament for the vacant NWA Tag Team Championship.

Seven of the eight matches on the card played host to Tag Team Title tournament matches. Highlights were the quarter final bouts pitting Brian Pillman and Jushin Liger against Nikita Koloff and Ricky Steamboat and the contest pitting Rick Rude and Steve Austin against Barry Windham and Dustin Rhodes. Both matches were a tad overlong at 19 minutes but consisted of sharp action throughout. The five other tag team matches all disappointed.

WCW World Champion, Sting put his WCW World Title on the line versus Big Van Vader, who had finally committed himself full time with WCW, after years prioritising bookings in Japan. The pair constructed a superlative contest that told a great story with Sting going over the top in his offence and leaving himself vulnerable for ‘The Mastodon’s’ terrifying power moves. The finish came when ‘The Stinger’ knocked himself goofy when he smashed his own head on the ring post when executing a Stinger Splash. That allowed Vader to hit a devastating powerbomb for the win and the World Title.

This was Vader’s star making performance in the West and established him as WCW’s top star. This contest set up even greater rematches in WCW over the next two years.

However, unlike Starrcade 1991, the card also featured singles matches and therefore was better for it.

The highlight of the show was the King of Cable tournament final pitting Sting against Big Van Vader. In a 17 minute stunner, ‘The Stinger’ upset Vader when he reversed a splash into a powerslam and pin.

Almost as good was the NWA and WCW Tag Team Championship bout pitting Shane Douglas and Ricky Steamboat against Barry Windham and Brian Pillman. All four men brought it with huge moves and excellent selling. A fantastic contest that went 20 minutes but felt like 10.

Ron Simmons retained his WCW World Title against Steve Williams in a passable, super stiff brawl, which was marred by the inconclusive ending. Both men were counted out when they wouldn’t stop pounding one another, then Williams was disqualified post-match after he battered the champion from behind.

Masahiro Chono bested The Great Muta by submission in a lacklustre effort, which was a disappointment considering the superlative contests the pair had contested in the Orient.

None of the four tag team qualifying matches lasted more than nine minutes and were instantly forgettable. The actual BattleBowl was superior to the 1991 version due to the slimmed down participant list. The Great Muta outlasted Vader, Sting, Steve Williams, Barry Windham, Dustin Rhodes, Van Hammer and Dan Spivey to win. He last ejected Windham with a series of dropkicks to win which set up a bout between the pair at SuperBrawl III. 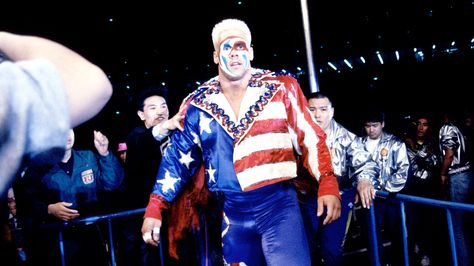 The second annual WCW/New Japan spectacular was anything but spectacular.

There were highlights though. The headliner was a good match-up which pitted The Great Muta and Sting versus The Steiners. The Steiners brought the big power moves whilst Muta and ‘The Stinger’ brought the energy. A hugely entertaining scrap.

Also decent was the match pitting Riki Choshu against Tatsumi Fujinami with both the IWGP and Greatest 18 Championships on the line. Unlike the Steiners versus Muta and Sting bout, this contest was built around submissions and was an enjoyable effort.

The card opener was a choice bout pitting Jushin Liger, Masashi Aoyagi and Akira Nogami opposite Hiro Saito, Norio Honaga and Super Strong Machine. As you would expect, this contest was packed full of cool, innovative offence and spectacular high spots.

However, there were just as many lowlights on display. Vader versus El Gigante (the future Giant Gonzalez) was awful. The Enforcers versus Michiyoshi Ohara and Shiro Koshinaka and the bout pitting Mr. Saito and Kim Duk versus Dusty Rhodes and Dustin Rhodes were unremittingly dull.

The WCW World Title match between champion Lex Luger and Masahiro Chono was the usual paint by numbers Luger bout. Even against a legendary performer like Chono, Luger could not find the motivation to make the effort which made for a disappointing clash.

The second WCW/NJPW show was a difficult event to sum up. It was good, bad and just like Luger, indifferent. 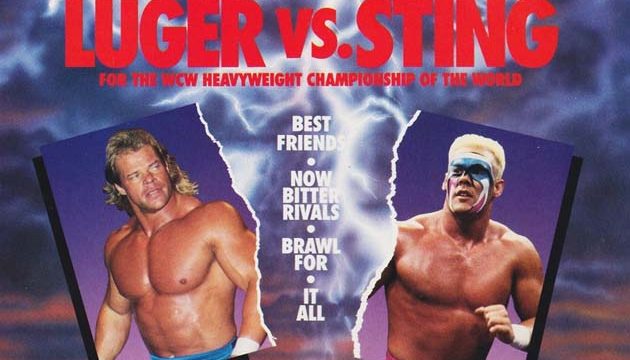 Although SuperBrawl II did not feature any classic matches, it did play host to lots of very good ones and as a whole event is a very entertaining show.

The event began with a bang as Brian Pillman bested Jushin Liger to regain the Light-Heavyweight Championship in an outstanding clash. The pair performed outstanding, creative offensive manoeuvres, many of which had never been seen before on US soil. A superb piece of work.

Arn Anderson and Bobby Eaton clashed with The Steiners in a very good, heated bout. Packed with good wrestling and brawling, this was a tidy affair, that was marred by a screwy disqualification finish. Anderson threw powder into Rick Steiner’s eyes, which caused ‘The Dog Faced Gremlin’ to suplex the official. When his brother hit the Frankensteiner to seemingly win the bout, with another referee counting the pinfall, the Milwaukee crowd was elated. Alas, the original official came to and conferred with the new referee and The Steiners were disqualified. Everything up to the finish was great.

Barry Windham and Dustin Rhodes dropped Larry Zbyszko and Steve Austin in a tidy affair, packed full of big moves and intensity. This bout had a definitive finish when Windham nailed Zbyszko with a flying Lariat for the pinfall.

Elsewhere, Cactus Jack versus Ron Simmons disappointed and Rick Rude and Ricky Steamboat contested a decent match, however, one that was vastly inferior to their stunner at Beach Blast, several months later.

The main event was also a letdown. Lex Luger in the final match of his WCW contract phoned it in and Sting struggled to carry him. The crowd also failed to engage in the bout and the result was a fairly lacklustre match-up. Sting defeated Luger to claim his second World Title and his first WCW World crown.

Beach Blast 1992 began with a bang with an excellent Light-Heavyweight contest between the future Raven, Scotty Flamingo and Brian Pillman. The furious pace was maintained throughout it’s 17 minute duration as the pair exchanged ground-breaking aerial manoeuvres. Flamingo scored the upset win.

Sting and Cactus Jack engaged in a classic Falls Count Anywhere encounter which saw Jack take some wild bumps, including a suplex on the concrete floor. Sting scored the pin by nailing Jack with a flying clothesline off the top rope onto the entrance way. A wild, hard hitting bout for 1992, that solidified Jack as a major player and established Sting as a tough babyface who could brawl as well as wrestle.

Ricky Steamboat defeated Rick Rude by four falls to three in a 30 minute Iron Man contest which is something of a forgotten classic. Unlike many Iron Man matches, that have a long feeling out process, Steamboat and Rude both began the match-up at a frenetic pace. It was a pace that seldom slowed. Rude established a 3-1 lead. However, as the bout neared conclusion, Steamboat scored three straight falls to take a 4-3 lead and the match. A frantic, breathless last five minutes or so, puts this over the top as one of the best Iron Man matches of all time. A brilliantly entertaining, logical and heated battle between two superb workers.

With the WCW Tag Team Title at stake, champions The Steiners wrestled to a 30 minute time limit draw with Terry Gordy and Steve Williams. As you would expect this was a hard hitting contest between four expert brawlers. Full of stunning powerhouse moves, this match had everything.

The rest of the card paled in comparison to those four matches, but Beach Blast was a blast from an entertainment perspective.

WrestleWar 1992 is best remembered for the WarGames battle between Sting’s Squadron and The Dangerous Alliance. For good reason. This intense, bloody and heated brawl is the finest WarGames bout ever held. Sting’s team won when Bobby Eaton submitted to Sting’s armbar.

This was the ultimate blow off to the feud which carried WCW through the first half of 1992, full of sub-plots and story points. A masterpiece.

There was lots more to appreciate on WrestleWar too. The Steiners bested the Japanese combo of Tatsumi Fujinami and Takayuki Iizuka in a 20 minute blinder. Full of stiff moves, stunning counters and full on brawling, this was everything you could possibly want out of a tag team contest.

Brian Pillman successfully defended his Light-Heavyweight Title against Tom Zenk in a high flying, technical masterclass. Johnny B. Badd defeated Tracy Smothers in a decent match-up which could have been great had it been afforded more than seven minutes and The Fabulous Freebirds bested Greg Valentine and Terry Taylor in a tidy bout.

The rest of the undercard was completely missable filler, but with three all time classic matches and a handful of decent ones, WrestleWar 1992 was one of WCW’s finest supercards ever.

You can watch WCW events exclusively on the WWE Network.