1991 saw the WWF’s astonishing boom period come to a grinding halt. This was mostly due to the steroid and sex scandals that engulfed the company during the calendar year. In July of 1991, Dr George Zahorian, of whom many WWF wrestlers were clients was convicted of illegally distributed anabolic steroids. What followed was a public relations nightmare for the WWF, which was exacerbated by WWF Champion Hulk Hogan’s less than truthful account of his own steroid use in his now infamous interview on the Arsenio Hall Show weeks later.

Earlier in the year, the company had received bad press for their exploitation of the Gulf War, when they positioned long-time American hero, Sergeant Slaughter as an Iraqi sympathising super heel.

Also, fans were visibly beginning to tire of Hulkamania and yearned for something different at the top of the card. WWF supporters would be made to wait another year before changes were made in the WWF’s main event scene.

This feature ranks every single WWF pay-per-view event from 1991. 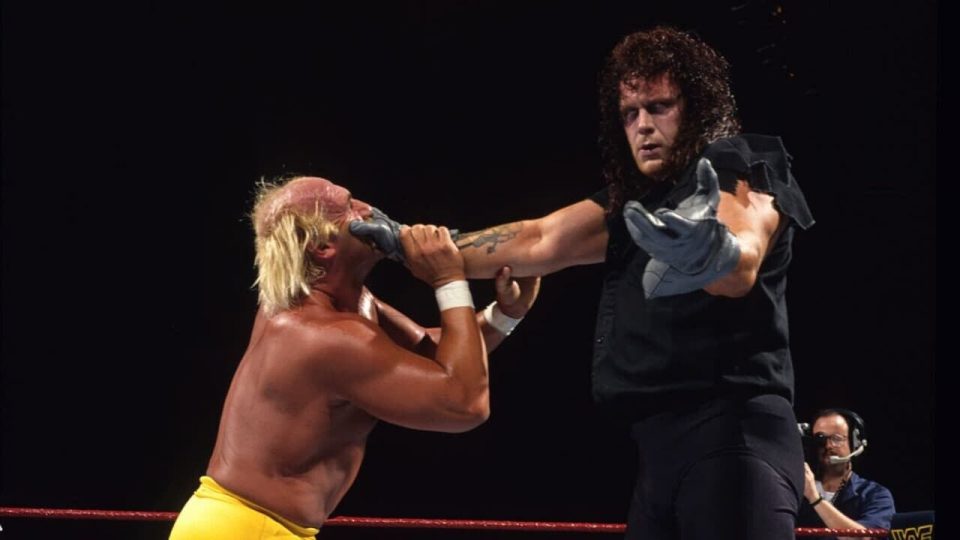 The WWF appeared to be heading into a transitional period at the 1991 Survivor Series.

That was highlighted by WWF Champion, Hulk Hogan’s shocking defeat to The Undertaker. ‘The Phenom’ lifted his first WWF Championship, when he Tombstoned ‘The Hulkster’ on a steel chair that had been placed in the ring by Ric Flair. The match was slow and tedious.

Hogan’s popularity was visibly on the wane. He would be gone from the WWF just months later as the Federation began to highlight a new breed of superstars.

Elsewhere, new WWF signing, Ric Flair was the sole survivor in a bout, wherein he partnered The Mountie, Ted DiBiase and The Warlord against Roddy Piper, Bret Hart, Virgil and The British Bulldog. Flair eliminated Bulldog and Piper evened the score by pinning The Warlord. In a screwy ending, the referee disqualified all participants for not following instructions barring Flair who had been knocked senseless on the outside. Until the silly ending, the action had been excellent.

That was the highlight of the card.

The remaining Survivor Series bouts all offered little. The Big Boss Man and The Legion of Doom overcame IRS and The Natural Disasters. Hawk and Animal survived. A newly face, Sergeant Slaughter teamed with Jim Duggan, The Texas Tornado and Tito Santana to defeat Colonel Mustafa, Hercules, Skinner and The Berzerker. The good guys completed a clean sweep of the dastardly heels.

The Nasty Boys teamed with The Beverly Brothers to beat The Rockers and The Bushwhackers. The final Survivor Series bout was notable only for the escalating tension between The Rockers, Marty Jannetty and Shawn Michaels. Jannetty accidentally wiped out his partner, which distracted Michaels causing him to be pinned. The dissension would famously explode on the January 12, 1992 airing of Brutus Beefcake’s ‘The Barber Shop.’ That angle would solidify Michaels as a singles act and he would lift the Intercontinental Title in October of that year. As for the match, it was overlong and boring. The Nasty Boys and Blake Beverly survived after Jannetty was the final participant pinned following a three on one assault.

The 1991 Survivor Series was historically significant, but woeful as an entertainment event.

#4 This Tuesday In Texas

This Tuesday in Texas was an experiment. The event was announced at the Survivor Series pay-per-view and took place just six days later.

The WWF wanted to gauge if there was demand from the public for additional pay-per-view events and if their audience would watch shows outside of the traditional weekend slot.

The Federation wanted to establish Tuesday night as a secondary night to hold pay-per-views. The fact they didn’t market an event on a weekday again until Taboo Tuesday in 2004 should tell you how successful this endeavour was.

The two big matches on the 90 minute show were ‘Macho Man’ Randy Savage’s long awaited in-ring return versus his hated rival, Jake Roberts. Roberts had been terrorising Savage and his wife, Miss Elizabeth for months. This culminated in a shocking angle on the November 23 episode of SuperStars, wherein Jake ‘The Snake’ attacked a prone ‘Macho Man’ with a King Cobra that sunk it’s fangs deep into Savage’s arm.

Disappointingly, their blow off bout only lasted a paltry six minutes and was shockingly anti-climatic considering the intensity of their blood feud.

Elsewhere, the bouts pitting The British Bulldog versus The Warlord and Bret ‘Hitman’ Hart against Skinner were interminable at 14 and 13 minutes in duration. Roberts and Savage could have used those additional minutes much more than these filler bouts.

Repo Man and Ted DiBiase versus Tito Santana and Virgil was pure house show fodder and was not pay-per-view worthy.

The card was headlined by the much anticipated re-match between former WWF Champion, Hulk Hogan and the man who had dethroned him at Survivor Series, The Undertaker.

Atypically for the time, the main event was filled with extra curricular activity more at home in the Attitude Era. The finish involved an interfering Ric Flair, ‘Taker’s urn and the contents of it being thrown into the eyes of the ‘Phenom’ by Hogan. That led to the ‘Hulkster’ nailing the champion with the Big Boot and Legdrop for the (tainted) victory and a record extending fourth WWF Championship win.

Such was the controversial nature of the finish, WWF President, Jack Tunney subsequently declared the title vacant and put it up for grabs in the 1992 Royal Rumble Match.

Unfortunately, the main event, the titular ‘Rumble match, disappointed and wasn’t a patch on the exciting 1990 bout. Numerous dead spots and a lack of star power hurt the entertainment value. Hulk Hogan won for the second year in a row, last eliminating Earthquake. That drew a line under their long running feud.

The show started with a bang as The Rockers and The Orient Express lit up The Miami Arena. Energetic, fast paced and innovative, this 19 minute match-up was the greatest opener in WWF history at this point. Just fabulous action from start to finish.

The Mountie beat Koko B. Ware in a nothing match.

A 14 minute Big Boss Man versus The Barbarian bout sounds like a recipe for disaster. However, Boss Man brought his working boots and carried his foe to a respectable match-up. The giants smashed each other with everything they had. Boss Man reversed a cross body into a cradle for the pinfall victory.

The card was rounded out by two disappointing battles that concluded with stellar angles. Dusty Rhodes and his son, Dustin defeated Ted DiBiase and Virgil. ‘The Million Dollar Man’ brutally castigated Virgil post-match. After years of abuse, Virgil finally stood up to his tyrannical boss and battered him senseless. This set up a feud that would last for the rest of the year.

Finally, Sergeant Slaughter clashed with The Ultimate Warrior, with Warrior’s WWF Championship on the line. The match was depressingly pedestrian with virtually no action whatsoever. Slaughter shockingly pinned Warrior in a titanic upset. Slaughter took advantage of interference from ‘Macho King’ Randy Savage who lamped Warrior with his sceptre, as vengeance for the former champion refusing Savage a title match earlier on the show.

With an excellent match and another good one, the 1991 ‘Rumble wasn’t a terrible show, but the main event bouts failed to deliver spectacularly.

The main event attraction was not a match but a wedding. ‘Macho Man’ Randy Savage finally wed Miss Elizabeth in a memorable segment. The couple had actually been married since 1984 in the real world. At the reception, Jake Roberts and The Undertaker gate crashed, which set up a memorable feud between Savage and Jake ‘The Snake’.

The ‘Match Made in Hell’ saw The Ultimate Warrior teamed with Hulk Hogan to clash with the job squad of Sergeant Slaughter, Colonel Mustafa and General Adnan. New WWF acquisition, Sid Vicious, now renamed Sid Justice, served as the special referee and was endorsed by Hogan post-match. The faces won with ease.

The bout is best remembered for what happened backstage. Warrior had famously asked for and received a six figure payoff shortly before the show. This was because he had felt underpaid for WrestleMania VII and wanted parity in pay between himself and Hogan. McMahon acquiesced to his former champion’s demands, safe in the knowledge he planned to suspend him immediately after the main event. That’s what occurred and Warrior disappeared from the Federation until WrestleMania VIII.

The show began with a fun six-man tag team battle between The British Bulldog, Ricky Steamboat and The Texas Tornado against Power and Glory and The Warlord. Despite the heel squad’s limitations, the bout was kept lively by Steamboat’s and Tornado’s efforts.

The event is best remembered for the classic battle between Intercontinental Champion, Mr. Perfect and Bret ‘Hitman’ Hart. ‘The Excellence of Execution’ defeated the champion in an 18-minute masterclass. Unquestionably, one of the best matches of the year.

Virgil beat Ted DiBiase in the pinnacle of their conflict. The crowd went wild as Virgil pinned his former boss to lift the Million Dollar Championship. This was the highlight of Virgil’s career, no doubt.

The Big Boss Man bested The Mountie in a memorable Jailhouse Match. Post-match, The Mountie furiously objected to spending a night in the cells. In an award winning performance, one would have thought The Mountie was en route to the gas chamber.

The Legion of Doom lifted their first WWF Tag Team Championship in a decent brawl with The Nasty Boys. It was fought under No Disqualification rules, but regular tag rules were bizarrely enforced. Despite that fact, the action kept moving for the bout’s seven minute duration.

The card was rounded out by nondescript contests between The Natural Disasters against The Bushwhackers and Irwin R. Schyster versus Greg Valentine. 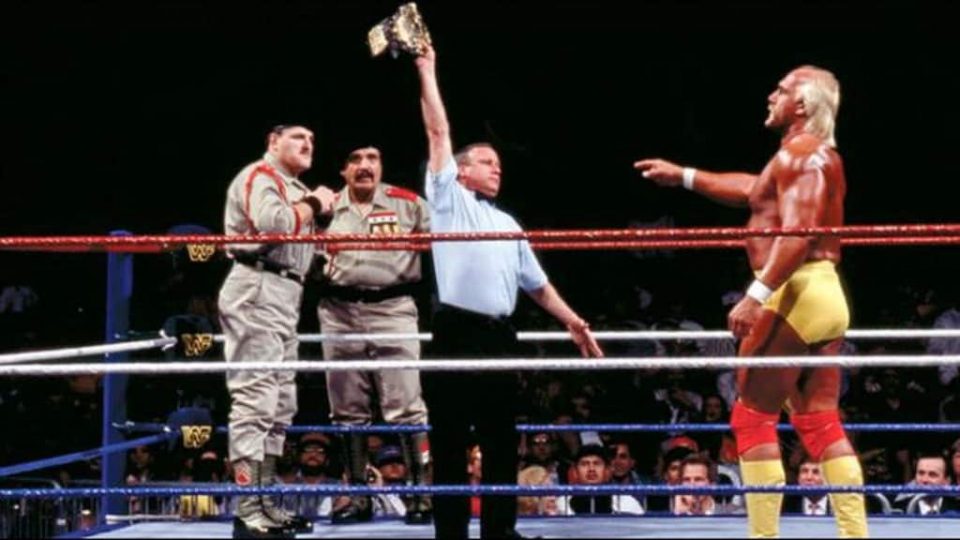 However, the LA Memorial Coliseum later revelealed that it was actually poor ticket sales necissated the switch. That was unfortunate, as despite the negative media attention, WrestleMania VII was a very good event.

Like most WrestleMania’s preceding it, the card was overloaded with matches; 14 in total on the main card.

The most famous and best match on the show, was the Retirement Match, pitting The Ultimate Warrior versus ‘Macho King’ Randy Savage. In a 21 minute stunner, Warrior and Savage had the crowd eating out of the palm of their hands. The dramatic finish saw Warrior, who had doubted himself and nearly walked out of the match, repeatedly smash the ‘Macho King’ with shoulder blocks. Warrior pinned Savage to seemingly end his career. Savage’s manager, Sensational Sherri clobbered the ‘Macho King’ post-match, which led to the emotional reunion of Savage and Miss Elizabeth, who had been watching the match in the crowd. A truly memorable moment to cap off a remarkable bout.

Although the main event match pitting Hulk Hogan versus Sergeant Slaughter could not hold a candle to Warrior/Savage, it was a more than adequate headliner.

Of note on the undercard, The Undertaker made his WrestleMania debut against ageing veteran, ‘Superfly’ Jimmy Snuka. ‘The Phenom’ made short work of his foe, finishing him off with a Tombstone Piledriver after just four minutes. The long running feud between Jake Roberts and Rick Martel was blown off in a ludicrously stipulated ‘Blindfold Match’. The pair stumbled around for an interminable eight minutes before Roberts managed to grab hold of ‘The Model’ and nail him with a DDT for the win.

The Nasty Boys lifted the WWF Tag Team Championship in a hot match-up with defending champions, The Hart Foundation to mark their only Tag Team title reign in the Federation.

The rest of the card was largely filler with few of the bouts cracking the five minute mark. However, this show was all about the headline matches and they delivered in spades.