WCW played host to six pay-per-view events in 1991. It is remembered as one of the worst years in company history. The promotion’s biggest star, Ric Flair shockingly defected to the WWF in the summer of 1991, which left behind a threadbare roster, that was repeatedly hampered by nonsensical booking.

This feature ranks every WCW pay-per-view of 1991 from worst to best!

The 1991 Great American Bash was a calamity. Boasting zero good matches and plenty of utterly dismal ones, it is a strong contender for worst wrestling supercard ever.

The show was hamstrung from the get go as the advertised main event of NWA World Champion, Ric Flair versus Lex Luger had to be cancelled when Flair left the company following a dispute with WCW boss, Jim Herd. Barry Windham was drafted in as Flair’s replacement in the World title bout with the now vacant strap at stake. As ‘The Nature Boy’ had also retained the physical NWA World Championship belt, a new one had to be specially created for the show. Luger would finally win his first World Title, now christened the WCW World Championship in a tedious Cage Match. In typical chaotic WCW fashion, ‘The Total Package’ actually turned heel in the closing moments of the contest but his performance was so lacklustre, the fans in attendance didn’t even notice until he departed the ring with long-time heels, Harley Race and Mr. Hughes.

Oddly, the World Title bout didn’t headline the show. The main event instead was a two minute comedy squash match between Rick Steiner and Missy Hyatt opposite the team of Arn Anderson and Paul E. Dangerously.

The show ended on a dud and unfortunately everything that preceded it was even worse. El Gigante versus One Man Gang, Big Josh versus Black Blood and Ron Simmons against Oz are not matches any one would want to watch twice. 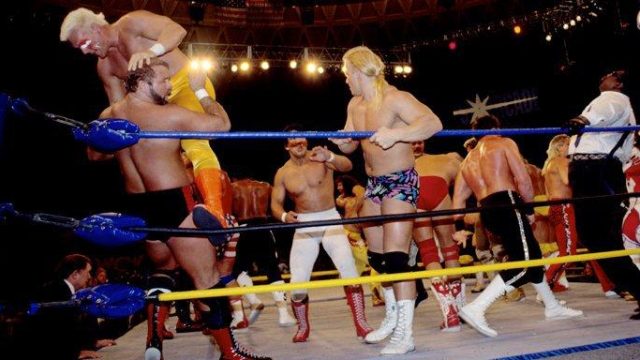 WCW’s flagship event, Starrcade was a disappointment. WCW devised a gimmick called the BattleBowl, which dominated the show.

40 wrestlers had their names picked from a hat and were randomly selected into tag team qualifying matches. This led to some interesting teams such as Sting and Abdullah the Butcher as well as Lex Luger and Arn Anderson.

The winners of the tag team contests qualified for the main event, the BattleBowl, a 20-Man double ring, over the top rope Battle Royal.

Sting last eliminated WCW World Champion, Lex Luger to win the bout and set up his title match with Luger at the following year’s SuperBrawl event.

Most of the tag team bouts lasted no more than five minutes, so nothing left an impression beyond the Luger/Anderson versus Terry Taylor and Tom Zenk collision, which was afforded 15 minutes.

The Battle Royal headliner was overlong at 25 minutes in duration and fairly dull until the final exchanges between Sting and Luger.

One of the weakest Starrcade events in history.

The problem with Halloween Havoc 1991 is that WCW booked all of it’s top stars in the opening contest. That bout was a curious attraction called The Chamber of Horrors. The objective of which was for one team to strap a member of the opponent’s team into an electric chair and electrocute them to earn victory.

The cage within a cage which contained the electric chair was so large, it took up most of the ring, which meant there was insufficient space for the wrestlers to perform any wrestling manoeuvres. Sting, El Gigante and The Steiners defeated Abdullah the Butcher, Cactus Jack, The Diamond Studd (Scott Hall) and Vader, when Butcher was fried. This was utter dross.

In the only passable contest on the show, Steve Austin wrestled Dustin Rhodes to a time limit draw with Austin’s World Television Title at stake. In the only other notable happening on the undercard, Rick Rude made his WCW debut, competing under a mask as The Halloween Phantom. He dropped Tom Zenk in 90 seconds to establish himself as a player in Turner’s organisation.

The headliner saw WCW World Champion, Lex Luger sleepwalk his way through his title defence against Ron Simmons. The mechanical Simmons needed Luger to carry him, but ‘The Total Package’ entered one of the most feeble main event performances in wrestling history as the contest completely fell apart. Worse still, the bout was two out of three falls! An utter embarrassment of a main event which left fans in no doubt as to why Luger never dethroned Ric Flair for the World Title in the late 80s and early 90s. He was a total liability as a headline act.

Wrestle War was a one match show. That bout was WarGames. The double ring Cage Match pitted Sting, Brian Pillman and The Steiners against Ric Flair, Larry Zbyszko, Barry Windham and Sid Vicious.

Heated, intense and bloody; this bout was everything WarGames is supposed to be and was one of the finest contests of the decade. Unfortunately, it is best remembered for the impromptu ending, after Vicious recklessly injured Pillman by powerbombing him directly on his neck, not once but twice! WCW sent El Gigante to the ring to throw in the towel for Pillman’s team, awarding the match to the heels.

Also of note on the card was the break up of Doom. After a loss to The Freebirds, Ron Simmons and Butch Reed scrapped, which led to a feud between the pair and ultimately Simmons’s singles push.

Lex Luger and Dan Spivey pulled off an incredible feat with the United States Title on the line. Luger, who never had good matches with anybody not named Ric Flair or Ricky Steamboat in the 1990s was carried to an impressive bout by Spivey. The former Skyscraper made Luger look like an absolute superstar before falling to defeat.

There was nothing else of worth on the event.

The card was highlighted by the incredible collision between The Steiners and Hiroshi Hase and Kensuke Sasaki. The two teams smashed each other with brutally stiff blows and lots of intense mat work. The crowd heat was off the charts which only added to the drama. Incidentally this match was The Wrestling Observer’s Match of the Year for 1991. It’s hard to disagree with that assessment.

The Great Muta and Sting contested a decent bout that suffered from hesitation in parts and an awkward clash of styles. Nevertheless, the talent from both participants carried this match through and it was well received by the Tokyo crowd.

Jushin Liger and Akira Nogami fought in a typically excellent junior heavyweight battle. Light years ahead of it’s time with innovative and daring high profile offence. This was superb.

The rest of the undercard ranged from decent (Tom Zenk, Tim Horner and Brian Pillman versus Shiro Koshinaka, Kuniaki Kobayashi and Takayuki Iizuka) to downright abysmal (El Gigante versus The Big Cat).

The show was headlined by a dream match pitting NWA World Champion, Ric Flair against IWGP Heavyweight Champion, Tatsumi Fujinami. Regrettably, it failed to deliver. Flair and Fujinami failed to find their groove and the match was only passable. It was marred further by a screwjob ending. Flair was backdropped over the top rope (an automatic disqualification in WCW at the time), but referee Bill Alfonso was laid out on the outside. Fujinami then pinned Flair whilst a second, Japanese referee made the count. Fujinami was announced as the new NWA World Champion in a title change strangely recognised by the NWA but not WCW.

The title confusion and controversy was settled in a re-match held at SuperBrawl.

The inaugural SuperBrawl was WCW’s best event of 1991. The show was highlighted by the all-time classic tag team contest that pitted The Steiners against Sting and Lex Luger. A molten crowd went wild for this hard hitting slugfest that never slowed down for a second.

Elsewhere, Bobby Eaton dethroned Arn Anderson to win his first ever singles title in a tidy match-up. Ron Simmons and Butch Reed fought inside the Thunderdome Cage in a battle of the former Doom members, with their former manager, Teddy Long suspended above the ring in a decent power match.

On the other end of the scale, El Gigante fought Sid Vicious in an embarrassing Stretcher Match which lasted all of two minutes. Kevin Nash made his debut as Oz, which was created to help promote Turner buying the rights to The Wizard of Oz for it’s Turner Classic Movies service. An elaborate entrance was held complete with actors portraying Dorothy, Scarecrow, Tin Man and the Cowardly Lion. They ascended the stage to a big castle set where they found Oz. When Oz entered the ring he squashed jobber Tim Parker in less than 30 seconds. A truly unforgettable spectacle.

There was nothing else of note on the under-card. In the headliner, Ric Flair clashed with Tatsumi Fujinami for the NWA World Title in an inferior rematch to their SuperShow clash.

Despite the lacklustre ending, SuperBrawl showed WCW at their best in 1991.

You can watch classic WCW events exclusively on the WWE Network.