After a phenomenal 1989, WCW catastrophically failed to capitalise in 1990. The company planned to position Sting as it’s new star. However, injuries delayed ‘The Stinger’s’ coronation and his first World Title reign was a flop.

Ole Anderson was installed as head booker in March and he introduced a series of “WWF inspired” sports entertainment gimmicks, such as the much maligned Black Scorpion character, that did not fit in well with the grittier, bloodier, more realistic style WCW was renowned for.

This feature ranks each pay-per-view WCW produced in 1990. 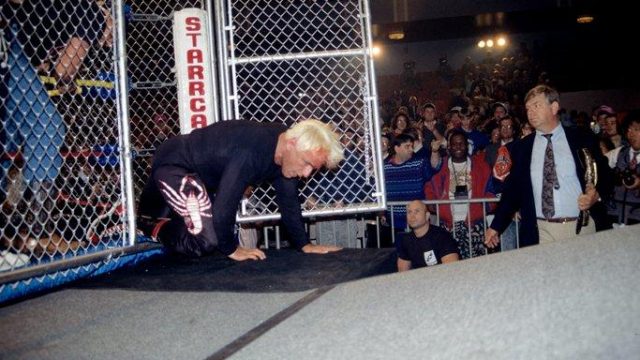 Starrcade was the worst show WCW produced in 1990. The company overloaded the show with a mammoth 14 matches. Only three of those bouts lasted longer than 10 minutes.

Seven of the card’s matches consisted of an interminable tag team tournament, with tandems representing eight different nations. The Steiner Brothers defeated The Great Muta and Mr Saito of Japan in the final to give America the predictable win.

Bobby Eaton versus Tom Zenk, Terry Taylor versus Michael Wallstreet, The Skyscrapers versus The Big Cat and Motor City Madman, Tommy Rich and Ricky Morton versus The Freebirds were all instantly forgettable.

Lex Luger reclaimed the United States Title in a much better than expected brawl. Doom tackled Arn Anderson and Barry Windham in the match of the night. Fought under Streetfight rules, this was a stiff, bone bending contest. However, in typical WCW fashion, the company managed to screw up the best bout on the card by booking the match to finish in a draw after just seven minutes. With a decisive finish and another five minutes, this could have been the match of the year.

That led to the main event. For months, NWA World Champion, Sting had been terrorised by a shadowy, hooded figure calling himself ‘The Black Scorpion.’

His ring entrance was flanked by multiple ‘Black Scorpions’ in a pre-cursor to The Undertaker’s Druids. The real ‘Black Scorpion’ then descended to the ring from a spacecraft. Quite, what a spaceship had to do with a scorpion is anyone’s guess.

The crowd heat for the Cage Match on the biggest show of the year for the NWA World Title was disappointing. Then again, the action was pedestrian for almost all of the 19 minute bout. Sting won with a flying crossbody and unmasked his opponent to reveal none other than Ric Flair.

This was even more of an anti-climax, considering Sting had feuded with Slic’ Ric extensively throughout 1990 and ‘The Black Scorpion’ angle was conceived as a way for Sting to do battle with another opponent. Such was the dearth of headline stars in WCW, the company had no other option than ‘The Black Scorpion’ character.

The storyline was an unmitigated disaster and capped off the year on a dud note. WCW would fare little better in 1991.

In a 38 minute stunner, Flair did his utmost to dodge the devastating power moves from his younger opponent. Luger had the match and belt won, with the champion in the Torture Rack. However, when he spotted his pal Sting getting battered by the Andersons, ‘The Total Package’ rushed to his friend’s aid. That distraction would ultimately prove fatal to Luger’s title hopes. The challenger was counted out and Flair retained, which set up another rewarding rematch at Capital Combat.

The rest of the card was disappointing. The Road Warriors versus The Skyscrapers, Buzz Sawyer and Kevin Sullivan versus The Dynamic Dudes and Norman The Lunatic versus Cactus Jack were complete duds.

The Rock n Roll Express and The Midnight Express rolled back the years and delivered their last great match. It was formulaic but extremely fun, old fashioned fare.

The card was rounded out with two decent tag team encounters. Brian Pillman and Tom Zenk defended their United States Tag Team Titles against The Fabulous Freebirds and The Steiners also retained their NWA Tag Team Titles versus The Andersons.

A passable event, but aside from the headliner, nothing was a classic.

The 1990 Great American Bash was an overlong show, with an interminable 11 matches on the three hour card.

Brian Pillman, who usually lit up WCW supercards in the early 1990s could not drag journeyman Buddy Landel to a passable match. This match was a dull start to the show. Mike Rotunda versus The Iron Sheik, Doug Furnas versus Dutch Mantel and Harley Race versus Tommy Rich were all embarrassing duds.

The card stepped up several notches with the NWA United States Championship bout pitting The Midnight Express against The Southern Boys. Fast paced, frenetic and heated, this bout was everything the first four matches on the card were not.

Vader made his WCW debut in an impressive squash of Tom Zenk. ‘The Mastodon’ would dominate the company over the next few years by capturing three WCW World Championships.

Mean Mark Callous, just a few months shy of being reborn as The Undertaker clashed with Lex Luger in an entertaining match-up for Luger’s United States Championship. ‘The Total Package’ won with a huge clothesline.

This event is best remembered for Sting’s first World Championship win. ‘The Stinger’ dethroned Ric Flair for the NWA World Title in an electric main event. ‘The Nature Boy’ tried every trick in his playbook, but could not hold back his challenger. A fantastic headliner that kicked off Sting’s World Championship reign in style. Regrettably, the rest of his title run would disappoint. 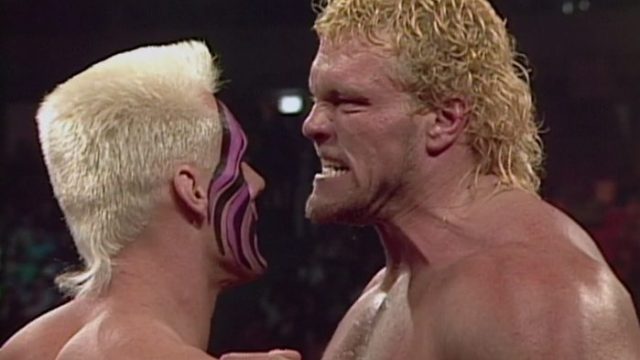 Halloween Havoc 1990 played host to two superb matches and at the half way point, seemed destined to be one of the greatest supercards of the era.

However, the headline bouts regrettably underdelivered. Lex Luger and Stan Hansen clashed over the United States Title in a clash that should have been much better. Hansen surprisingly snared the belt from ‘The Total Package.’

The main event pitting NWA World Champion, Sting versus Sid Vicious also disappointed. Vicious was not up to the task of headlining and aimlessly wandered around the ring at points and failed to deliver the intensity and urgency the match demanded. The finish was overbooked as Vicious apparently pinned the champion to win the bout and title. However, the challenger had actually defeated Barry Windham in Sting make-up. A confused Sting then smashed Vicious with the belt and Stinger Splash for the win.

The highlights of the card were three of the four tag team matches on the show. Firstly, The Midnight Express clashed with Tommy Rich and Ricky Morton in an energetic opening match. The Steiners clashed with The Nasty Boys in a hard hitting brawl, packed with stiff clotheslines and suplexes. With the NWA World Tag Team Championship on the line, Doom and The Four Horsemen squad of Arn Anderson and Ric Flair collided in a match that never slowed down from the opening bell. After a plethora of near falls, the two teams were both counted out at the 18 minute mark.

The rest of the card was pure filler. No-one in their right mind would want to watch Terry Taylor versus Bill Irwin, Brad Armstrong versus JW Storm, The Junkyard Dog versus Moondog Rex, The Renegade Warriors versus The Fabulous Freebirds or The Master Blasters versus The Southern Boys more than once.

Capital Combat is infamous for the appearance of Robocop during the main event. Robocop’s appearance was a promotional crossover, with the impending cinema release of Robocop 2. However, that appearance sadly overshadows a phenomenal event that delivered in spades.

Lex Luger once again challenged Ric Flair for the NWA World Title. The pair battled inside a Steel Cage Match. Luger used his size and weight advantage to batter the champion senseless. However, Flair could not escape the cage, no matter how hard he tried. Flair’s Four Horsemen colleagues could not open the cage for their comrade, until Ole Anderson managed to commandeer the controls. With the cage risen, Barry Windham clipped Luger causing the disqualification. Despite the DQ in a Cage Match, the action preceding it, was phenomenal. Post-match, Sting and Robocop chased away the heels. That set up Sting’s big moment at The Great American Bash, two months later.

Underneath, The Steiners and Doom rocked the house in a hard hitting bout which was a showcase for each tandem’s devastating power moves. Butch Reed pinned Rick Steiner to claim the NWA Tag Team Titles for his team.

The United States Tag Team Championship was also on the line as The Midnight Express challenged Brian Pillman and Tom Zenk for the straps. Fast paced, innovative and every other superlative you could think of. This match was fantastic.

The Rock n Roll Express versus The Fabulous Freebirds and The Samoan Swat Team versus Mike Rotunda and Tommy Rich were a shade below the aforementioned tag team scraps, but were decent enough.

A pre-Undertaker Mark Calloway, Mean Mark Callous defeated Johnny Ace in a nice showcase for Mean Mark’s hard hitting offence. Ironically, it would take a decade in the WWF, for Calloway to demonstrate the full range of his moveset.

The less said about the comedy match between Paul Ellering and Teddy Long the better, but the opener pitting Norman The Lunatic and The Road Warriors versus Bam Bam Bigelow, Cactus Jack and Kevin Sullivan was white hot.

Capital Combat was a super event, completely overshadowed by the show closing angle. Well worth a look.

You can watch all of these pay-per-view events exclusively on the WWE Network.