In 1989, Turner promoted the first pay-per-views under the WCW banner. It was a sterling start. 1989 was one of the finest years in WCW history. Engaging storylines, realistic action and excellent matches made for an incredible year on pay-per-view.

Which event was the best? This feature ranks them all.

Despite 1989 being a standout year for WCW on pay-per-view, it ended on somewhat of a whimper.

Starrcade, WCW’s biggest event of the year did not host marquee matches that were the culmination of months of exciting storylines, as it had in previous years. Instead, WCW promoted two interminable and confusing one night round robin tournaments. One of which showcased WCW’s four top singles stars: Ric Flair, Sting, Lex Luger and The Great Muta. The other featured WCW’s best four tag teams: The Steiner Brothers, Doom, The Road Warriors and The Wild Samoans.

As mind boggling as the rules were, the action was at least decent in most of the matches. However, owing to the tournament structure and a colossal 12 bouts on a three hour card, none of the contests were able to exceed expectations.

Indeed, the only really good match was the final singles bout pitting Ric Flair versus Sting; the winner of which, rather conveniently, would win the entire tournament. Sting pinned Flair to leapfrog him in the standings and win the singles tournament. That result kicked off a long running storyline in which ‘The Stinger’ would eventually dethrone ‘The Nature Boy’ for the NWA World Championship at the 1990 Great American Bash. The Steiners claimed victory in the tag team tournament.

Starrcade was a disappointing climax to what had been a superlative year on pay-per-view for WCW.

Halloween Havoc was a mixed bag. There were no four or five star classics on display, but most of the card was solid. Newcomer, Tom Zenk clashed with veteran Mike Rotundo in a decent match-up that opened the show. Plucky underdog, Zenk overcame the underhanded approach favoured by his more experienced foe. In contrast, Tommy Rich versus The Cuban Assassin was a dull bout that nobody cared about.

The Steiner Brothers versus Doom promised much on paper, but neither squad were yet at the peak of their powers. Their 15 minute clash felt longer and did not grip the live crowd. Doom picked up the shock win.

However, the other tag team matches on the card all offered plenty of entertainment. The NWA Tag Team Titles were on the line as The Fabulous Freebirds clashed with The Dynamic Dudes. The real story was the crowd reaction to the two tandems. The heel Freebirds were over like rover and the faces, Shane Douglas and Johnny Ace were booed out of the Philadelphia Civic Center. The Freebirds retained to a rapturous reception.

The Road Warriors versus The Skyscrapers was a curiosity attraction with the Warriors clashing with opponents who were even bigger than them. This inevitably led to both teams largely no-selling each other’s offence until Hawk eventually played the face in peril, which led to a well received hot tag to Animal. However, the bout broke down from there, which led to the Skyscrapers getting disqualified.

The headliner was another tag team match-up. Competing inside the Thunderdome Cage, Ric Flair and Sting took on Terry Funk and The Great Muta. The longest reigning WWWF Champion of all time, Bruno Sammartino was the guest referee. However, one team could only be declared the winner if the other team threw the towel in.

This match was by no means a classic but there was plenty of activity to hold one’s attention. Ole Anderson accompanied Flair and Sting whilst Gary Hart supported Funk and Muta. The screwy finish came when Anderson pasted Hart, causing him to drop the towel. Sammartino then awarded the victory to the faces.

However, despite the rewarding headliner, match of the night honours went to the United States Championship bout between Lex Luger and Brian Pillman. Not many expected Pillman to dethrone Luger but ‘Flyin’ Brian’s’ big bumping and aerial offence wowed the crowd and injected plenty of energy and pace into proceedings. Luger, to his credit, played his part as the heel powerhouse to perfection.

Halloween Havoc 1989 was not an all time great supercard but there was plenty of worthwhile action on display.

Ricky Steamboat and Ric Flair completed their famous trilogy at Wrestle War. Strangely their NWA World Championship bout took place in the middle of the card. However, it’s positioning in the show didn’t harm the match’s heat or quality. Former NWA World Champions, Lou Thesz, Pat O’Connor and Terry Funk were ringside as judges, should the bout end without a decision.

In a worthy conclusion to their feud, the pair wrestled yet another superlative match-up. Steamboat and Flair traded big moves and counters at a breathless pace. After 32 minutes of jaw dropping action, ‘The Nature Boy’ finally scored the pin as he hooked Steamboat’s leg as he attempted a slam. Flair reclaimed the NWA World Title he had lost to ‘The Dragon’ at Chi-Town Rumble.

‘The Funker’ challenged Flair to a title match. The new champion rebuffed the offer due to Funk now being a Hollywood star, explaining there were active wrestlers in the company ahead of him in the queue. Affronted by Flair’s response, Funk snapped and battered the ‘The Nature Boy’ senseless. In a violent spot, the former NWA World Champion hit ‘Naitch’ with a piledriver onto a table apparently breaking his neck.

A world class title bout followed by one of the greatest angles of all time to set up the new champion’s next feud. Wrestling booking does not get any better than this.

Elsewhere, Lex Luger dropped the United States Title to Michael Hayes in a good match-up. Luger was pinned after interference from Terry Gordy, which set up a reformation of The Freebirds. ‘The Total Package’ would soon reclaim the gold but turn heel in the process.

Much of the card was filled out with decent but forgettable short matches. Sting versus The Iron Sheik, The Varsity Club versus The Road Warriors and The Dynamic Dudes versus The Samoan Swat Team were all entertaining but with a longer time allocation could have been far better.

Ranger Ross versus Butch Reed, Dick Murdoch versus Bob Orton Jr and Eddie Gilbert and Rick Steiner versus Kevin Sullivan and Dan Spivey were total duds. However, these short forgettable matches could not overshadow the all time classic that was Steamboat versus Flair III. 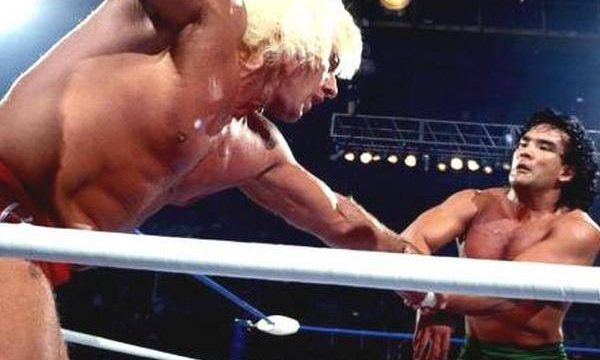 Chi-Town Rumble was a hot event, famously headlined by the Ric Flair versus Ricky Steamboat NWA World Championship match. That bout was the first in their classic trilogy. The contest was non-stop action from start to finish, with the pair working at a frantic pace. Steamboat reversed a Figure Four Leglock attempt by Flair into a small package to win his first and only World Title at the 24 minute mark. An all time classic match-up that was miraculously surpassed by their two rematches later that year at Clash of the Champions VI and Wrestle War.

There were some duds on the under-card: Michael Hayes versus Russian Assassin #1 and Sting versus Butch Reed were both mind numbingly boring. However, the rest of the card was rounded out by bouts which ranged from passable to very good.

The card stepped up a gear with a hugely satisfying six man tag team contest pitting The Midnight Express and Jim Cornette versus Randy Rose, Jack Victory and Paul E. Dangerously. The sight of Cornette pounding away on Dangerously was worth the admission fee alone. The stipulation in this bout was that the loser of the fall would need to leave WCW. Rose was pinned and was forced to depart WCW. The heat for this contest was off the charts and the action never let up.

Rick Steiner defended the TV Title versus Mike Rotundo in an old fashioned amateur type scrap. The finish came when Steiner locked in a sleeper but fell backwards and ended up pinning himself. Rotundo was crowned the new champion and Steiner subsequently formed a tag team with his brother, Scott.

Lex Luger defeated Barry Windham to win the United States Championship in a fast paced match-up with excellent psychology. If there was one complaint, it was that the ending of this encounter was nearly identical to the preceding bout. Windham delivered a bridging backdrop suplex, but Luger lifted his shoulder at the last second, which meant the champion pinned himself.

The semi-main event was a decent battle for the NWA Tag Team Championship. The Road Warriors beat The Varsity Club. Steve Williams matched up well against Hawk and Animal which added an interesting layer to proceedings. Hawk pinned Kevin Sullivan to earn the win for the Road Warriors.

Chi-Town Rumble was an excellent event and would have been the stand out show of 1989, had it not been bettered by an all time classic pay-per-view. 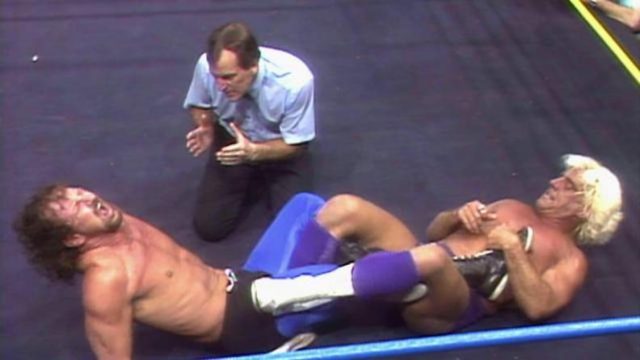 The Great American Bash 1989 is a strong contender for finest wrestling supercard ever.

Boasting four five star classics, all of the top matches delivered in spades.

The undercard was unspectacular. A Two Ring Battle Royal, The Skyscrapers versus The Dynamic Dudes, Bill Irwin versus Brian Pillman and The Steiner Brothers versus The Varsity Club were either too long to hold one’s interest or too short to make an impression. Jim Cornette versus Paul E. Dangerously was a sports entertainment comedy fest.

However, those bouts were just a taster of what was to come. Beginning with Sting versus The Great Muta, the card moved into fifth gear. With the Television Title on the line, the pair exchanged dazzling high flying moves in a fast paced encounter. The finish came when Sting avoided Muta’s red mist and hit a bridge suplex for the pinfall win. Replays showed Muta lifted a shoulder, which resulted in a re-match two months later.

Lex Luger clashed with former NWA World Champion, Ricky Steamboat in a super stiff war. Steamboat roasted Luger with chops, whilst ‘The Total Package’ smashed his opponent with clotheslines. As the action intensified, the referee, Tommy Young struggled to contain the pair. Career babyface, Steamboat snapped and clocked Luger with a chair causing a disqualification. All out action from start to finish. An instant classic.

In the semi-final spot, WCW promoted a War Games bout. The match pitted The Fabulous Freebirds and The Samoan Swat Team versus The Road Warriors, The Midnight Express and Steve Williams. This was an ultra stiff, super intense battle. Road Warrior Hawk forced Freebird, Jimmy Garvin to submit to win the bout for his team.

Ric Flair clashed with Terry Funk in a highly charged grudge match with the NWA World Championship on the line. Atypically, Flair began the match quickly, attacking Funk on the outside. As the match progressed, ‘The Funker’ targeted Flair’s neck which he had injured so brutally at Wrestle War.

In a spectacularly violent moment, Funk smashed ‘The Nature Boy’ in the face with a branding iron. Flair bled massively, intensifying the heat. The finish came when the champion countered an inside cradle to pin Funk. An incredible brawl with believable psychology. It retains it’s power three decades later. One of the finest main event matches of all time.

The perfect end to a near flawless pay-per-view event.