The 2022 NXT Stand And Deliver event is in the history books, capped off by Dolph Ziggler shockingly retaining the NXT Championship against Bron Breakker in the evening’s main event.

Throughout the show, there were also a few Easter eggs hidden throughout the show, ranging from subtle tributes to recently-retired WWE Hall of Famers to a current champion – who also debuted a new design for their championship – using the same podium as a former WWE Superstar.

Read about the hidden Easter eggs from WrestleMania 38.

Going Out In Style 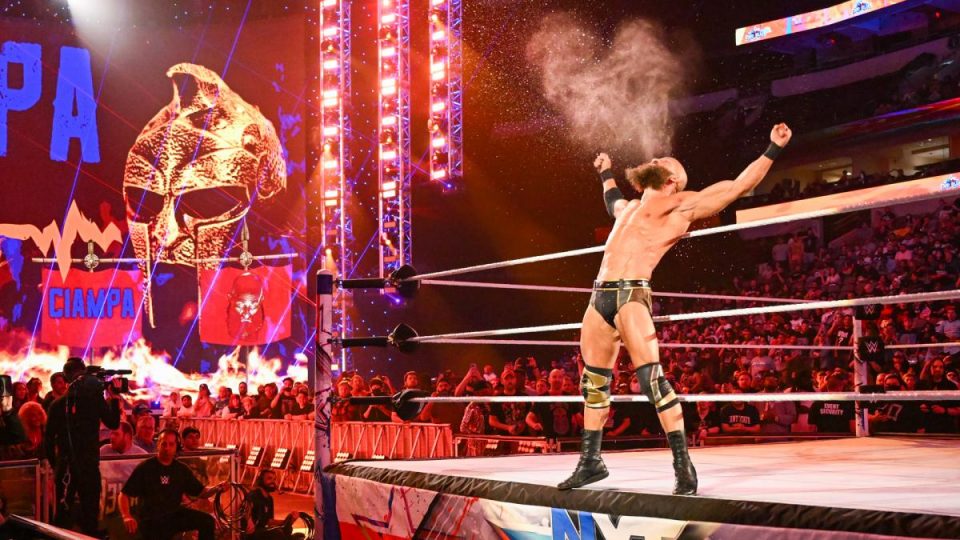 Tommaso Ciampa seemingly bid farewell to NXT during Stand And Deliver, losing to Tony D’Angelo before being serenaded by the Dallas, Texas faithful as he left the ring. The former two-time NXT Champion would be met at the top of the ramp by Triple H, who was making his return to WWE programming after announcing his retirement just over a week ago.

Ciampa would, however, provide a heartwarming tribute to ‘The Game’, as well as Shawn Michaels and former DIY partner Johnny Gargano, during his Stand And Deliver appearance. The Triple H references came when Ciampa spit a mist of water during his entrance, a trademark of ‘The King of Kings’. Tommaso would then execute a Spinebuster on D’Angelo during the match, a move synonymous with Triple H. The spot was followed by a small curtsy, the staple taunt of Triple H during his time as the obnoxious Hunter Hearst Helmsley.

Ciampa would also pay tribute to Shawn Michaels by performing the signature muscular taunt of ‘The Heartbreak Kid’ during the match, while trapping Tony in a Garga-No Escape at one stage. That move, of course, was the go-to finisher of Johnny Gargano, Ciampa’s NXT Tag Team Championships-winning partner in DIY and legendary foe who departed WWE in December.

Tommaso Ciampa ultimately lost to Tony D’Angelo, and is now expected to officially join the main roster following WrestleMania 38. He was an iconic figure within the black-and-gold era of NXT, providing countless memorable classics against Gargano, The Revival, Adam Cole, and others, with his departure signifying the official end for that era of NXT. 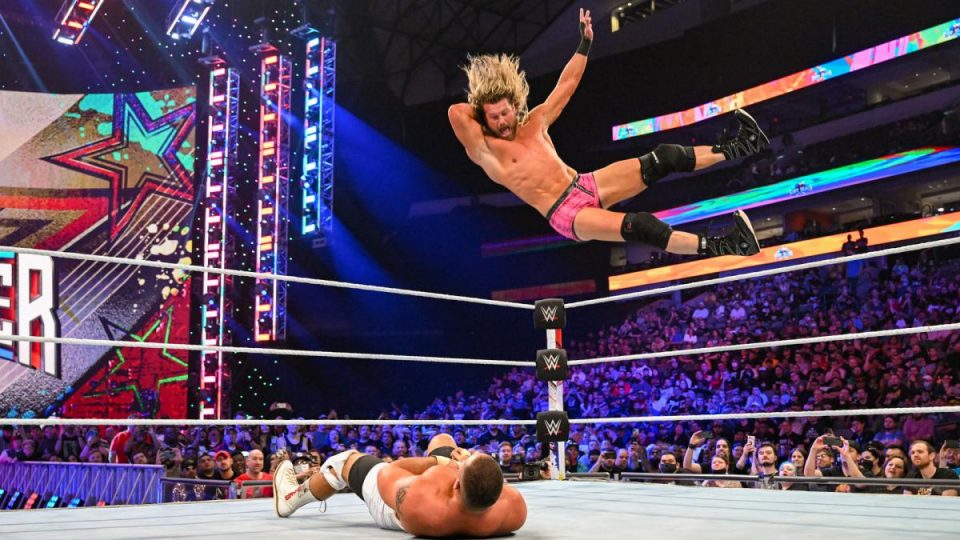 In the main event of NXT Stand And Deliver, Dolph Ziggler would retain the NXT Championship against former champion Bron Breakker, shockingly pinning the son of Rick Steiner after many had presumed Breakker would become a two-time champion. This marked Ziggler’s first defence of the championship he’d captured on the Roadblock special of NXT 2.0.

During the match, Dolph would execute a top-rope diving elbow drop, a move that’s commonly associated with WWE Hall of Famer, Randy ‘Macho Man’ Savage. On this occasion, however, the move was seemingly done to pay tribute to another Hall of Famer in Shawn Michaels. Ziggler subtly chopped his own arm on the way down in preparation for his elbow connecting with Bron’s chest, doing so in the same manner as ‘Mr. WrestleMania’ himself.

Dolph ultimately defeated the Steiner son by utilising a Superkick, a move that’s become a regular aspect of his arsenal since he first defeated Zack Ryder with the move at the 2011 Vengeance pay-per-view. This has drawn numerous comparisons between Ziggler and Michaels as a result, with Arn Anderson, another WWE Hall of Famer who now serves as a coach for All Elite Wrestling, commenting on Ziggler’s use of the Superkick:

“It was the fact that Dolph, who throws a hell of a superkick, the office did not want him using the superkick because that was Shawn’s finish, but Shawn was retired. Shawn was gone. You can’t retire moves. How many super kicks do you see today for God’s sakes? Probably one in every single match, in every company. That was a heated issue years ago.”

At Stand And Deliver, ‘The Showoff’ also returned to wearing pink trunks. He’s worn tights for the last several years, though it’s unclear if this will be a permanent change or a one-off for the marquee match. Bron Breakker, meanwhile, adorned a white singlet, similar to that worn by The Steiner Brothers during their WWE career in the early ’90s.

(Stand And) Deliver A New Title 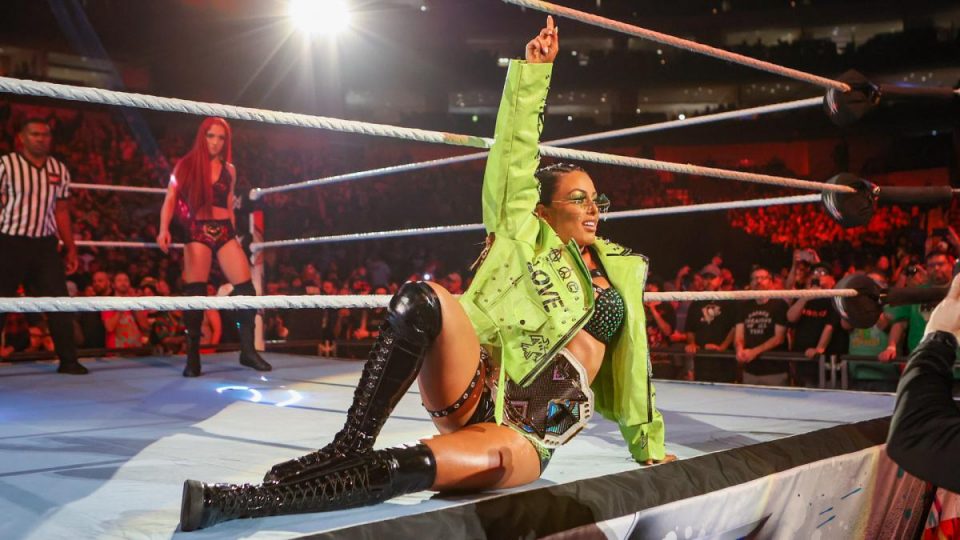 It wasn’t made quite clear when Mandy Rose first entered the American Airlines Center, nor was it properly acknowledged by the commentary team of Vic Joseph and Wade Barrett, but WWE debuted a new design for the NXT Women’s Championship during Stand And Deliver. Rose was defending the title against Cora Jade, Kay Lee Ray, and former champion Io Shirai in a four-way.

The new design features a mishmash of colours that resembles the NXT 2.0 aesthetic with a white strap, and was designed by Wildcat Belts. They’ve previously worked with WWE in designing the majority of their current championship belts, as well as designing for Ring Of Honor, Major League Wrestling, and the Major Wrestling Figure Podcast.

They’ve posted a close-up of the title design on their Instagram, which beautifully shows off the new colour scheme, alongside a few stills from Stand And Deliver of Mandy holding the championship up high:

This marks the third design for the NXT Women’s Championship. The most recent design was introduced over WrestleMania 33 weekend in April 2017 at NXT TakeOver: Orlando, where NXT had an entire overhaul of their championship designs.

Once A Rascal, Always A Rascal 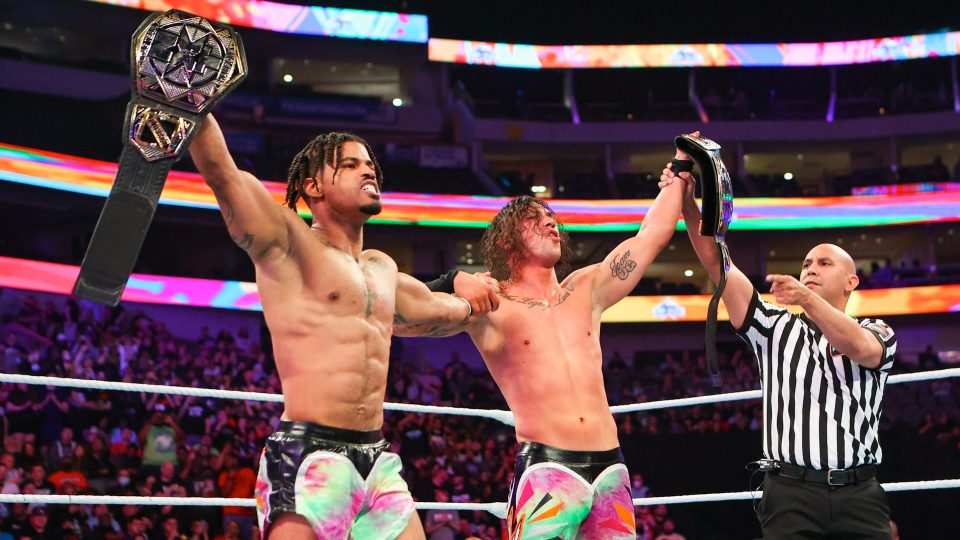 One of the three title changes at NXT Stand And Deliver saw MSK, the pairing of Wes Lee and Nash Carter, capture the NXT Tag Team Championships for the second time as they defeated the defending champions and Imperium members Marcel Barthel and Fabian Aichner, alongside Brutus and Julius Creed in an enthralling three-team clash.

Lee and Carter also debuted new gear for the match, adorning a tie-die variant of their regular gear. The colours closely resembled the colours they were when they were part of The Rascalz prior to joining WWE, where they were frequently joined by current IMPACT Wrestling X Division Champion, Trey Miguel.

Previously in WWE, the former Dezmond Xavier and Zachary Wentz have typically worn either monotone or duotone gear, but this marks the first time they’ve explicitly worn Rascalz-esque tie-die gear in WWE. Regardless of if they continue to wear it moving forward, Stand And Deliver was certainly a great time to debut it with them becoming just the fourth multi-time NXT Tag Team Champions.

Not only did Mandy Rose enter wearing a newly-designed NXT Women’s Championship, but she also delivered a grand entrance for her anticipated title defence. The Toxic Attraction member would descend from a smoke-surrounded podium on the stage, while the titantron gave her a set of wings that came down behind her.

It seems this isn’t the first time we’re seeing this podium, however, as NXT commentator Wade Barrett seemed to imply that this was the same podium used by him when he was performing as Bad News Barrett. As Mandy slowly dropped to the stage, the former Intercontinental Champion declared that Rose had pleaded for him to loan her the podium Barrett used to deliver various bits of bad news during his tenure as the character.

Regardless of who owned the podium, Mandy Rose ultimately retained the NXT Women’s Championship, pinning Io Shirai after drilling her with a bicycle knee strike, moments after ‘The Genius of the Sky’ had flattened Cora Jade with her patented top-rope Moonsault.