Dave Meltzer’s match ratings are a staple of the wrestling business. Since 1982, Meltzer has been assigning star ratings to every major match across the wrestling world.

Two hundred plus matches over the past 40 years have achieved the hallowed five star (or above) rating. 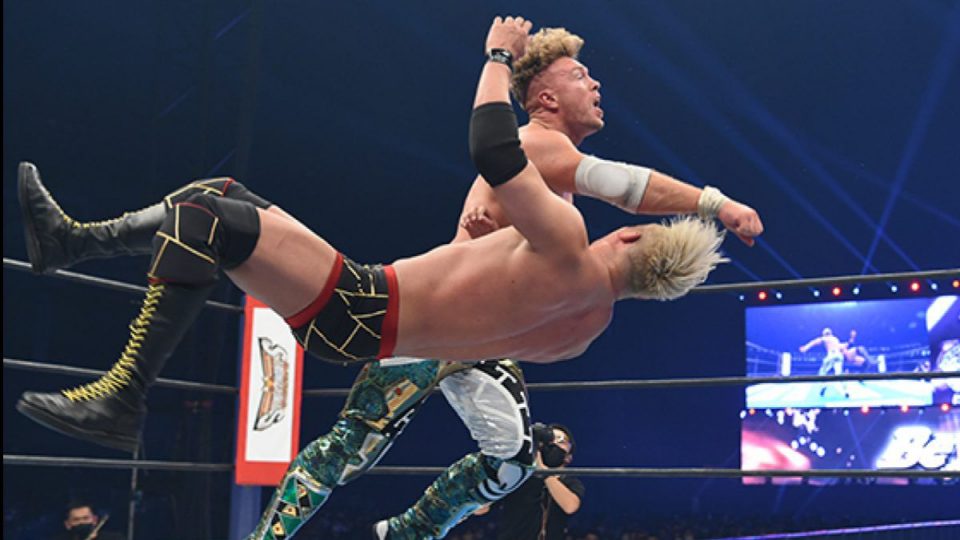 Will Ospreay challenged Kazuchika Okada for the IWGP Title in a high powered, aerial war at the January 4, Tokyo Dome spectacular. This match benefited from Okada tempering Ospreay’s illogical, acrobatic tendencies. The match was a slow starter but exploded down the home straight.

The pair cleverly built upon their previous contests and had callbacks which benefited the story of the bout.

Ospreay typically bounced from move to move and didn’t sell the gravitas of Okada’s offence. However, Okada was the opposite and his selling made the slight Ospreay seem like a legitimate threat to his belt.

Meltzer commented: “The sell job Okada did was unreal because he didn’t sell like a pro wrestler taking a head-butt but sold like a guy checking if his head was split open after a shoot head-butt.”

5.75 stars is high praise. At tad overrated perhaps, but the bout was undoubtedly a worthy headliner to New Japan’s biggest show of the year. 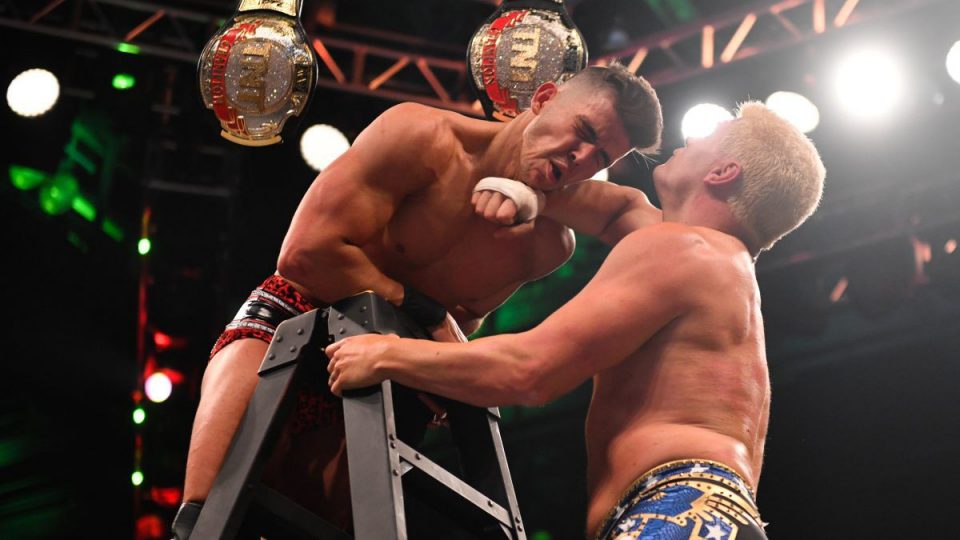 Cody Rhodes’s final AEW bout was one of his best. Dave Meltzer agreed by awarding the contest Rhodes’s second AEW five star rating after his Double or Nothing bout versus his brother, Dustin.

With the TNT Title at stake, Rhodes and his opponent, Sammy Guevara battled each other in a well crafted, escalating Ladder Match with big bumps and risky moves aplenty. Guevara finally claimed the gold, ending a classic contest.

Said Meltzer: “If this was 25 or 35 years ago when we didn’t see multiple great matches a week, a performance like this in one night would have made someone into a big star.”

Perhaps in hindsight, it did. Rhodes upped his profile and earned a big money contract with WWE and instantly walked into a main-event spot. For his part Guevara has become an integral part of the AEW roster and a multi-time TNT Champion.

Great match that was well deserving of the five star treatment. 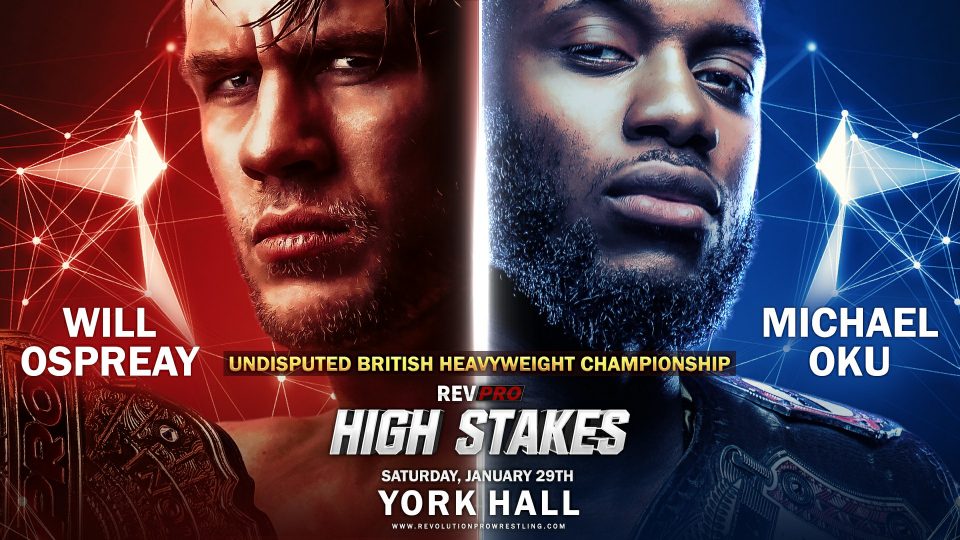 Interestingly, Dave Meltzer also awarded five stars to this little seen RevPro match-up between Will Ospreay and Michael Oku. There were just 1000 fans in attendance at York Hall on January 29, 2022. However, those fans were rewarded with excellent action.

This was a rematch from their October 2021 battle with Ospreay’s Undisputed British Heavyweight Title on the line.

Their October contest ended in referee stoppage. The stipulation for their rematch dictated that it could not end via stoppage no matter what. That understandably led to a fiercely contested bout, full of intensity and heat. Ospreay retained the gold in a high flying war.

Said Meltzer: “This is an easy ***** match… because of the heat and storytelling aside from the high level of wrestling.”

That summed up this battle perfectly. 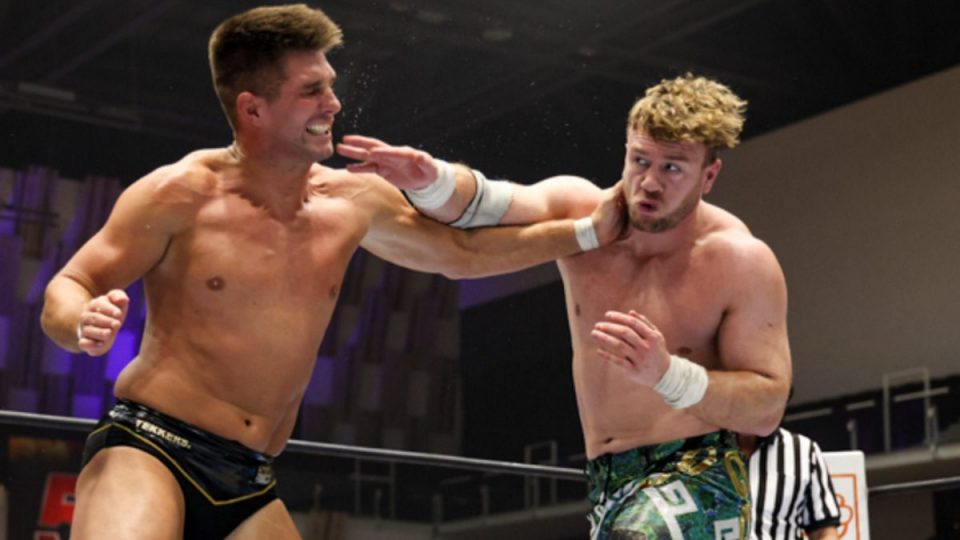 In the quarter finals of the annual New Japan Cup, Will Ospreay and Zack Sabre Jr clashed once more in another chapter in their thrilling series.

On this occasion Sabre Jr earned the victory via submission after locking on an armbar and leg-lock at the same time. Ospreay appeared to tap out, but the Englishman protested the finish and claimed he was attempting to punch out Sabre’s knee. Bizarre finish aside, this was a terrifically technical, ebb and flow thrill ride.

Meltzer said: “This match had the great technical wrestling of the pair’s previous match a few years back at York Hall, but was all about Ospreay’s selling and absolutely brilliant counter wrestling from both men.”

It was not an all time classic, but exciting with a hot crowd. 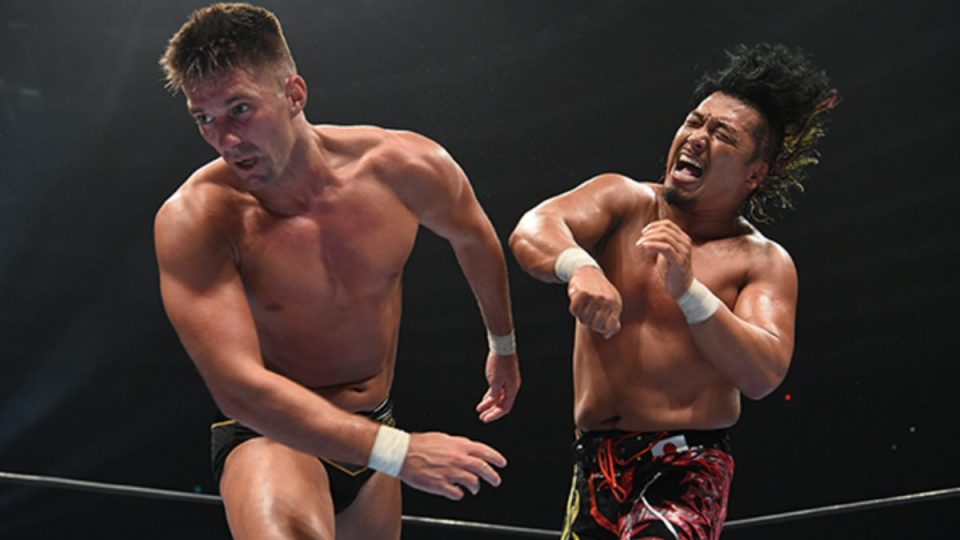 The second bout from the New Japan Cup to earn the five star treatment from Dave Meltzer was the semi-final contest between Zack Sabre Jr and Shingo Takagi.

Said Meltzer: “The original match story was Sabre countered everything Takagi was doing.”

Indeed. Sabre Jr reversed most of Takagi’s big moves and the pair traded counters in the style of Kurt Angle and Chris Benoit at their most fluid between 2002-03.

Sabre Jr finally chocked out Takagi and earned a stoppage win, after a hugely dramatic encounter.

This match was deserving of the five star treatment and earned Sabre Jr his second New Japan Cup win, after also triumphing in 2018.

FTR vs The Briscoe Brothers, ROH Supercard of Honor – 5 Stars 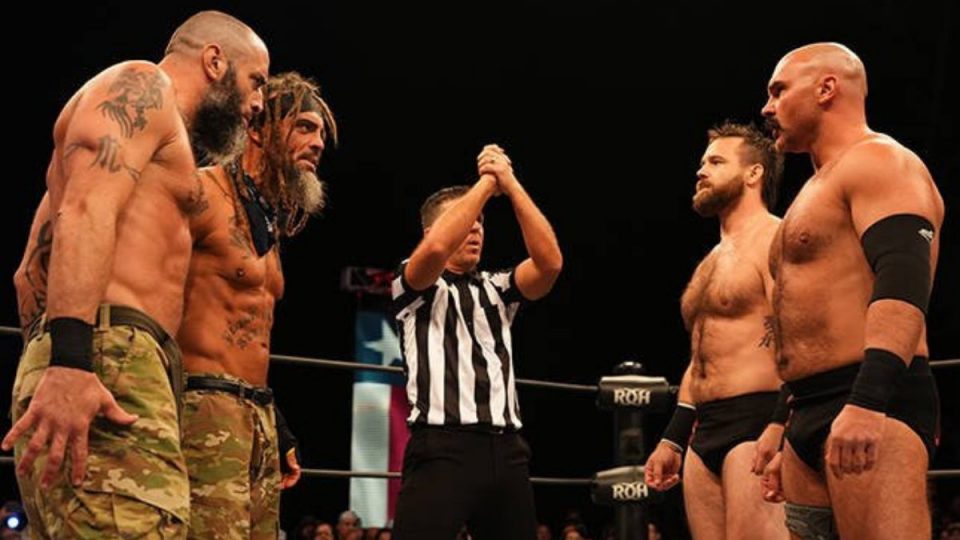 Tony Khan’s first Ring of Honor event as booker was highlighted by a thrilling tag team contest between ROH stalwarts, The Briscoes and FTR.

This 27 minute all action contest had a little bit of everything: technical wrestling, brawling, blood, big moves, near falls and a high octane pace. The bout was worthy of any and all plaudits it received.

Said Meltzer: “This was a classic which reminded me of the best Midnight Express vs Fantastics matches.”

It’s hard to disagree with that assessment. 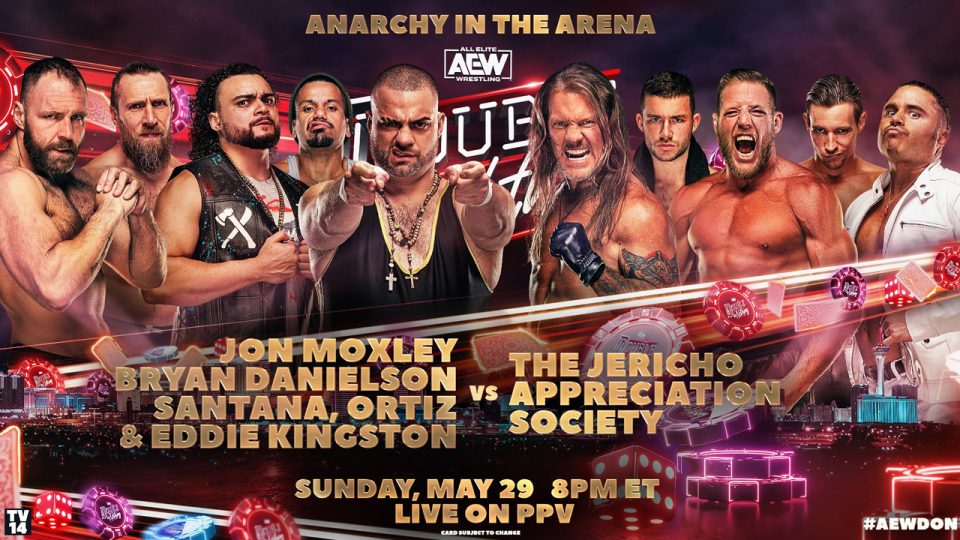 Said Meltzer: “This was nonstop mayhem and brawling… This was like an 80s Memphis brawl times ten.”

That’s a pretty accurate description of this 10 man tag team match-up. It was chaotic, full of insane spots and almost impossible to follow. Ladders, chairs, fire extinguishers; everything but the kitchen sink was involved in this Anything Goes arena-wide brawl.

The bout was reminiscent of the classic 1979 Tupelo Concession Stand Brawl, between Jerry Lawler and Bill Dundee and Larry Latham and Wayne Farris and the 1981 version pitting Eddie Gilbert and Ricky Morton versus Atsushi Onita and Masa Fuchi. However, this 2022 iteration was unfortunately lacking in transitions and logic. Anarchy In The Arena was never dull but a five star classic seems like a stretch.

Jericho and Hager choked out Danielson to earn the victory for the Jericho Appreciation Society. 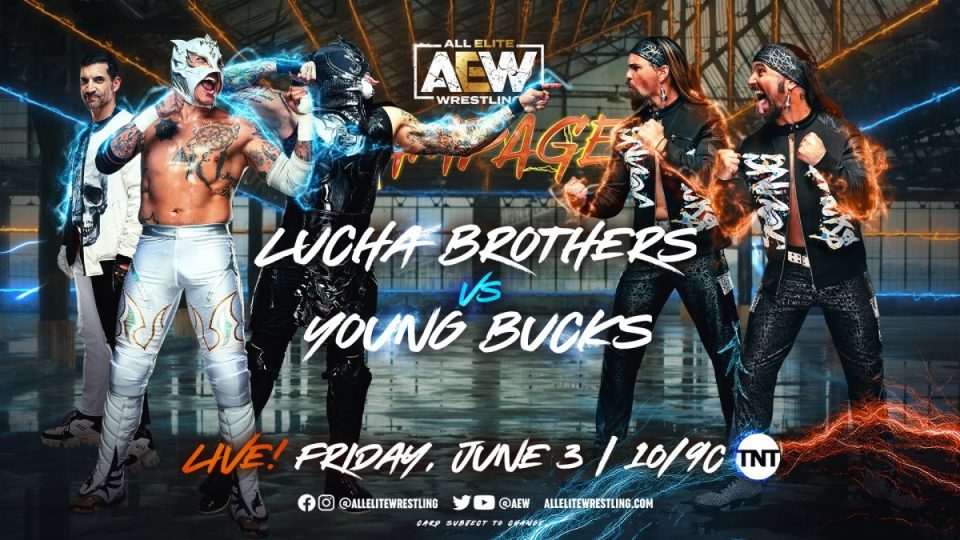 The June 3, Rampage hailed from LA, in The Young Bucks’ backyard. Meltzer stated in the Observer that Tony Khan let the Bucks choose their own opponents for the show. They selected Penta and Fenix whom Meltzer stated “are really their career best opponents at this point.”

The two teams worked at a breakneck pace and crammed so much into their allotted time of 14 minutes, that much of it failed to leave a lasting impression.

Strangely, AEW booked this match to be the opening contest on Rampage and burned the crowd out for the subsequent matches on the show.

Judged on it’s own merits though it has to be said that the timing of both teams was excellent and the contest was a lot of fun. However, the enjoyment factor will depend on how much you enjoy video game style matches, with big move and big move, with limited selling.

A slew of superkicks and the BTE trigger earned the Bucks the win in their hometown. 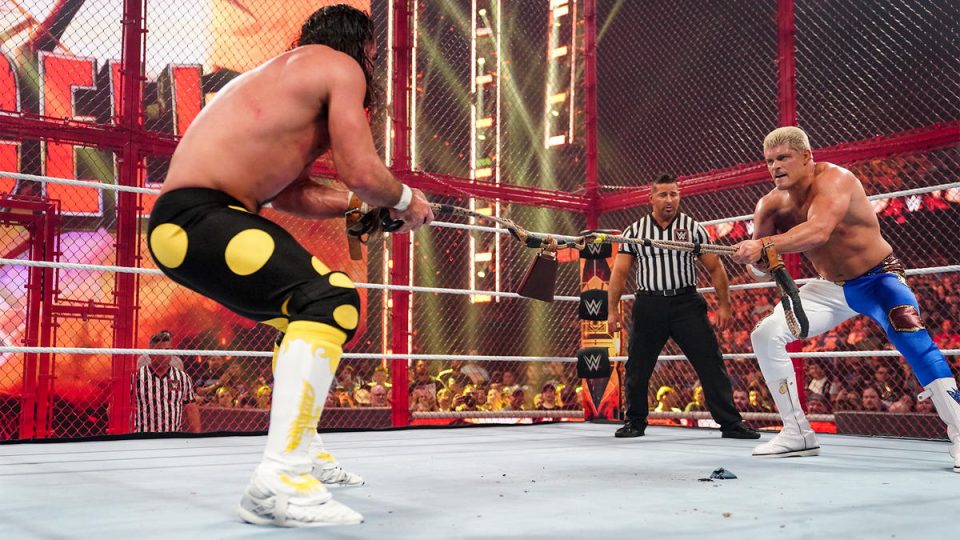 The third major match of the Cody Rhodes/Seth Rollins rivalry is the first main roster WWE match to achieve a five star rating from Meltzer since CM Punk vs John Cena at Money in the Bank 2011.

Although WWE has produced plenty of classic bouts since, the Hell in a Cell war between Rhodes and Rollins is well deserving of it’s five star status.

Entering the bout with a torn pectoral muscle, an unsettling hush fell over the Allstate Arena when Rhodes removed his jacket. You could sense collective jaws dropping as fans witnessed the severe state of ‘The American Nightmare’s’ injury by the eye watering bruising covering his right pectoral region and arm. The Chicago crowd felt every bump and blow Rollins inflicted on Rollins and were awestruck when Rhodes withstood Rollins’ brutal assaults and nailed him with a Pedigree, three Cross Rhodes and a sledgehammer shot to pull out an unlikely, but incredibly dramatic victory.

Meltzer summed the bout up perfectly when he wrote that the show “will always be associated with the sickening bruising on the right side of Cody Rhodes’ torso.” Quite so. The injury led to authentic drama and emotion that cannot be produced artificially.

FTR vs The Briscoe Brothers, ROH Death Before Dishonor – 5 Stars 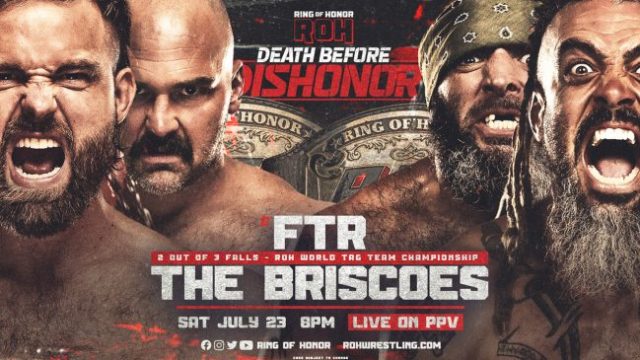 FTR and The Briscoe Brothers drew a line under their feud at the first Ring of Honor pay-per-view. Just like their clash at Supercard of Honor, the two teams stole the show.

With callbacks aplenty to their previous encounter, this two out of three falls encounter was a superlative encounter. Perhaps a shade inferior to their Supercard of Honor clash, this was nevertheless an outstanding piece of work from both squads. An absolute war from start to finish and they had the live crowd gripped throughout it’s 45 minute duration. 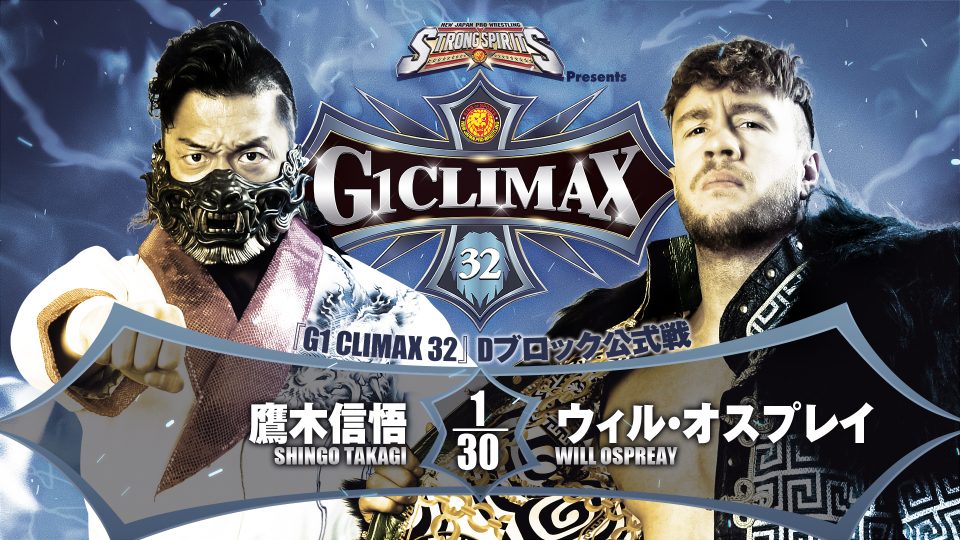 Will Ospreay notched his twentieth 5 star (and plus) rating from Dave Melzer after his 22 minute war with Shingo Takagi at the G-1 Climax.

Super stiff, innovative and packed with excellent athleticism, this was everything you would expect from these two. Takagi earned the win when he nailed Ospreay with Last of the Dragon for the clean pin.

Said Meltzer: “This was a creative off the charts match.”

That’s an accurate assessment as the bout played off their past wars, with strong psychology. This was another fine instalment in their series.

To stay up to date with Dave Meltzer’s star ratings you can subscribe to the Wrestling Observer Newsletter.