1982 was a big year for pro wrestling. Even though we were still three years away from the first WrestleMania, wrestling had already started merging with mainstream entertainment.

In that year there were two late-night TV appearances of note.

First of all, fresh off the success of Rocky III, we have Hulk Hogan on Johnny Carson.

It’s strange seeing a young Hogan at only 29 years of age calmly explain to Johnny what Hulkamania was, the size of his 24-inch arms and 60-inch waist, and his dietary habits. He didn’t even say brother, brother!

He also had enough respect for Carson not to choke him out on live television when asking if wrestling was fixed. It would take another two years for him to grow that kind of confidence. 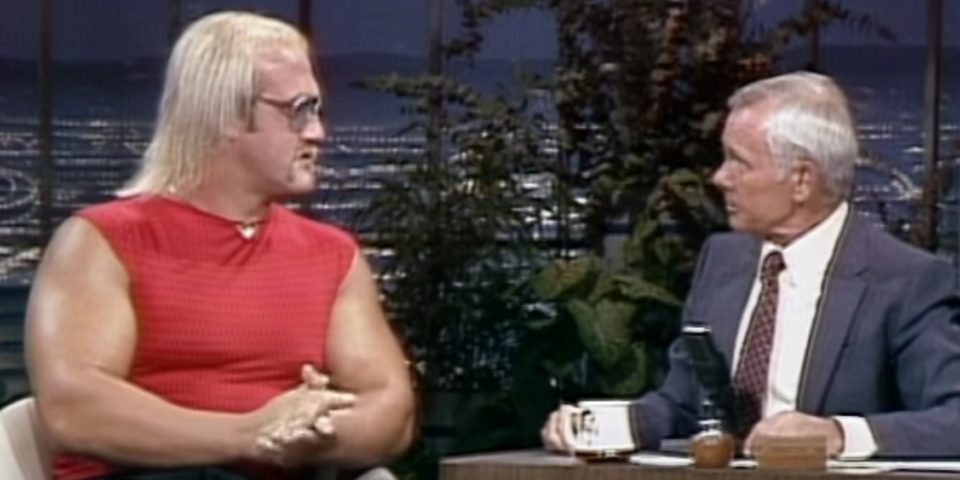 As for the other important 1982 interview…well, we will get to that later on in the list.

Since then, late night television and wrestling have had a strong relationship. It’s a perfect platform to help promote events outside of the usual wrestling crowd and create epic TV moments. Sometimes bizarre, sometimes uncomfortable, but almost always noteworthy.

Well, that’s the opening monologue out of the way, let’s get tonight’s article started! Stick with us folks, we have a great list lined up, right after this.

Fallon has had a lot of wrestlers appear on his show over the years, even if only cameos, like that time he played the phone booth game with The Rock, and the Big Show turned up to join in on the fun. 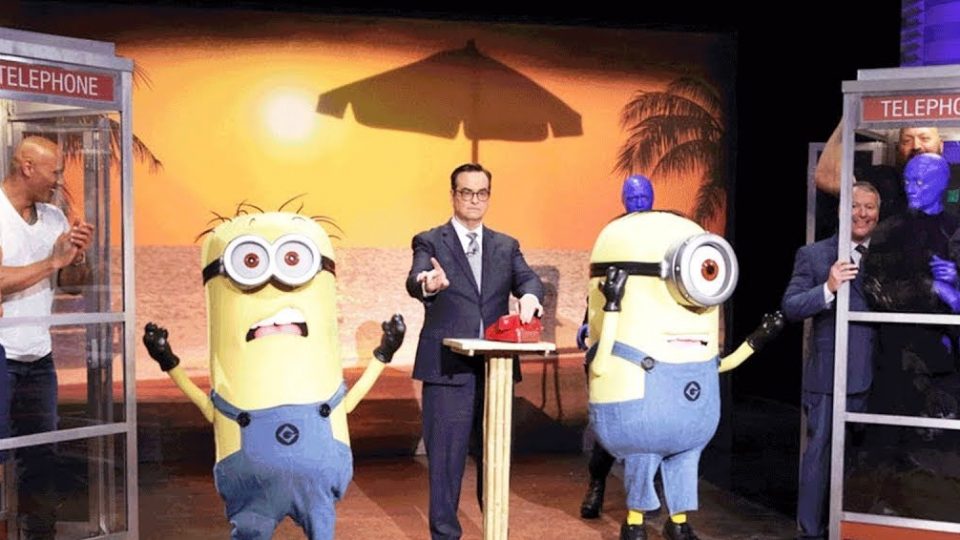 Most recently Roman Reigns was there with a great interview segment hyping Wrestlemania 38.

But one of the most chuckle-worthy has to be in the run-up to WrestleMania 35, where Braun Strowman, Camella, Drew McIntyre, Alexa Bliss, Kofi Kingston, and Seth Rollins all turned up to deliver insult lines written by school children.

The segment worked because all of the wrestlers understood the assignment and delivered the lines with serious venom.

Well, all except Kofi, who happy danced on his way out, but that’s why we love Kofi.

Of course, you’ll never catch more serious WWE superstars like The Undertaker do something so silly…

The Undertaker On Jimmy Fallon 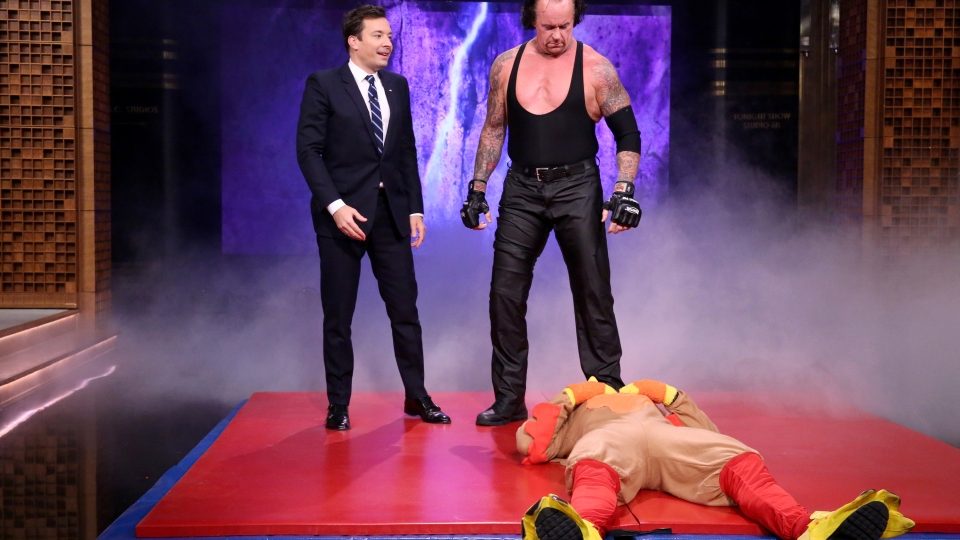 …Or maybe you would.

Almost twenty years ago The Undertaker appeared as a guest on Jimmy Kimmel. One of the big advantages of the “Big Evil” character was that the not-so-dead man could make TV appearances with less fear of breaking the demonic persona.

We got what was at the time a rare interview with Taker followed by a pillow fight with Cousin Sal. Although entertaining in its own right, today we are talking about his appearance on another Jimmy’s show, and we aren’t talking about R-Truth’s imaginary friend.

Around Thanksgiving 2015, Jimmy Fallon read suggestions from his comment box. One suggestion read that “You should have The Undertaker from WWE come out, and tombstone a guy in a turkey outfit on your show.”

After saying such a request would be impossible on short notice, we hear the famous gong, and the studio lights went down…

What makes this segment so funny is how straight Taker played it. He makes his way into the studio, epic entrance and all, while a turkey man (former Raw GM Brad Maddox) clucks around him.

Taker grabs the Gobbedly Gookerimpersonator and performs the task as requested, planting him with his famous pile driver.

Taker would do a repeat spot five years later, this time tombstoning a scarecrow at Halloween 2020. As this took place after his boneyard battle with AJ Styles, does it technically count as Taker’s last match?

Take care when googling “Undertaker Vs Turkey” by the way, as another popular video shows Calaway gunning down a real-life bird in the woods.

It seems the Phenom has a strong dislike of white meat. Maybe it’s some leftover resentment from the Gooker hatching from his egg the same night as his WWE debut. 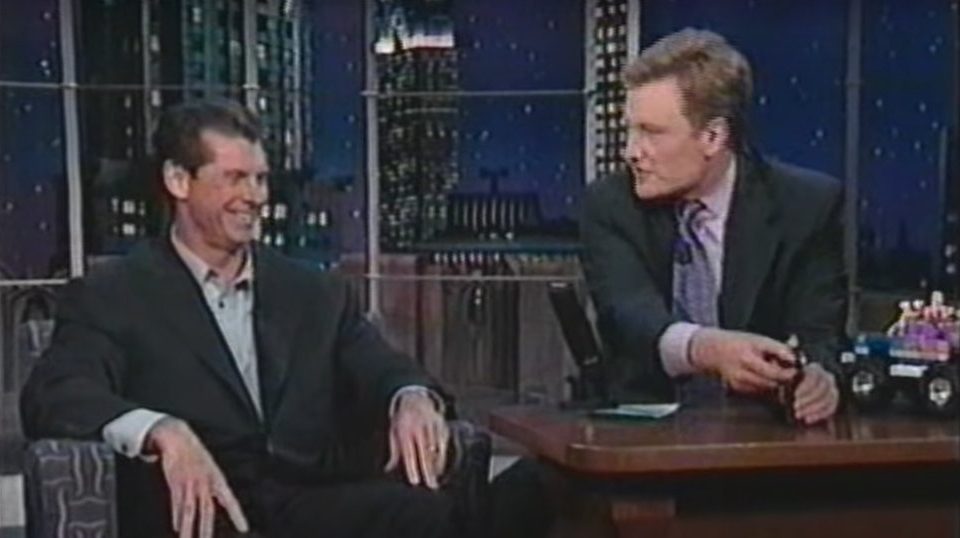 Vince has been making talk show appearances since the ’80s. He was the man on the scene for the delivery of the “late night baby” on the 3rd anniversary of David Letterman, and appeared as an actual guest in 1989.

Both appearances were slightly awkward at best.

However, ten years later it was a new era and on Conan O’Brien it wasn’t just Vince McMahon who appeared as a guest. It was MR MCMAHON!

Of course, Vince didn’t turn up in full Attitude Era mode, strutting out on stage with a puffed up chest and telling Andy Richter to “GO TO HELL!” in a raspy voice, but the fact that he was a baddie at the time put less pressure on him being liked by the audience, which allowed a more relaxed chat.

The interview is good fun, highlights include a proposal for Andy being given the gimmick of “Cheeks” and Vince calling Ted Turner a “SONOFABITCH” multiple times.

But it’s mostly worth a view just because it’s interesting seeing Vince make a rare appearance outside of the confines of the WWE.

The nWo Take Over The Tonight Show 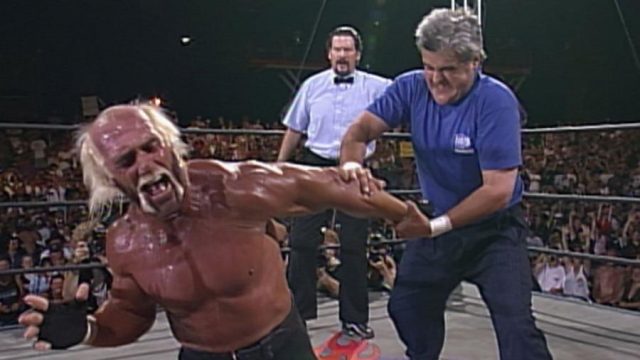 The late ’90s were certainly a hot time for the wrasslin’ with more media coverage than ever before.

On an episode of The Tonight Show back in 1998, Jay Leno’s sidekick Kevin Eubanks asked the host if he had watched the previous evening’s Nitro.

Eric Bischoff and Hogan had performed a late-night parody, in which host Bischoff skewered the original and totally not played out concept of making fun of Leno’s famous chin.

Not to be outdone, Leno introduced Hogan out onto the real Tonight Show show, only for a little Hollywood imitator to rock up on a little motorbike.

But then the REAL Hogan and Bischoff appeared and proceeded to kick Leno and Eubanks off their own program.

THE NWO HAD TAKEN OVER THE TONIGHT SHOW!

Well, they did for a commercial break at least. Jay and Kevin came back with DDP on hand to save the day.

This was of course set up for the tag match with Hogan and Bischoff taking on DDP and Leno at Road Wild.

Say what you like about Jay Leno, his dubious backstage politics were enough to rival even Hogan’s, but the man put 100% into the angle, and we are very unlikely to see pro wrestling treated with such seriousness and reverence on a mainstream American prime time television non-wrestling related show again.

And so we return to the year of our Lord 1982. Andy Kaufman’s style of comedy blurred the edges between fiction and reality. He knew how to work an audience, and this made him a perfect fit for wrestling.

Declaring himself the Inter-Gender wrestling champion of the world, Andy would tour the country exclusively battling female contenders for his title, offering cash prizes to anyone that could beat him in under three minutes. No one ever did.

This drew ire from one Jerry Lawler, and their legendary feud began. In one of their matches on the Memphis wrestling circuit, The King actually hit Kaufman with a couple of piledriver’s! 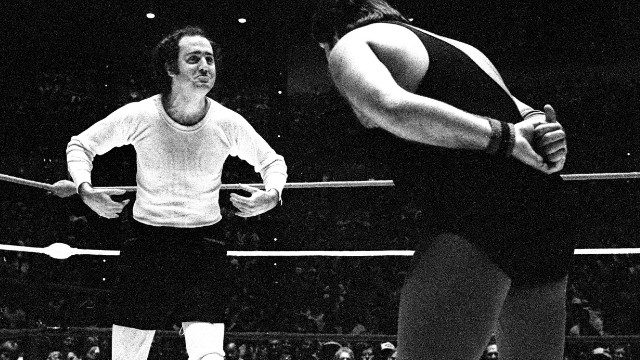 Playing up to his neck injuries by wearing a brace, even though the said injury had occurred months beforehand, Kaufman sat with Lawler as a special guest on David Letterman. Andy told ‘The King’ he was lucky he didn’t sue him, and the only reason he didn’t was that he was not that kind of man.

This prompted the King’s now famous retort “What kind of man are you?” and a few moments later Lawler would slap Andy out of his chair.

At this point, as previously mentioned, pro wrestling was still considered legit competition by some and was certainly still promoted that way.

In 1998 when the nWo arrived on the tonight show, even though everyone did a great job at playing it straight, the audience was at that point pretty much in on the joke, but in 1982, The King’s actions were considered real and shocked America.

It wasn’t revealed until many years later, sadly after Kaufman’s death, that it was all a work. It would be wonderful if Andy were still around today, to hear his take on not only this incident, but many of the jokes and hoaxes he pulled in his career.

But the fact that he didn’t means a level of mysticism shall always remain in the unique and legendary performer’s career.