AEW and NJPW’s first-ever inter-promotional PPV, Forbidden Door, looks set to thrill and excite fans on both sides of the Pacific.

Stars from both promotions will go head-to-head in a series of matches across an absolutely stacked card that features multiple titles on the line and first-time-ever matches.

Here are our predictions for every match on the history-making pay-per-view.

The Ass Boys and Max Caster have become a makeshift team that will face a group of NJPW’s top up-and-coming stars.

The match will be fun and a great start to the show, likely featuring one of Caster’s signature raps to get the fans going.

Prediction: The Gunn Club and Platinum will pick up the win in this opening match.

It’s The Nightmare Factory vs. CHAOS as QT Marshall and his student Aaron Solow take on the former IWGP Tag Team Champions Hirooki Goto and YOSHI-HASHI in a first-time-ever match.

Prediction: Marshall and Solow will take the loss as NJPW get their first win of the night.

Swerve in their Glory is an exciting and effective tag team but as four-time IWGP Junior Tag Team Champions, El Desperado and Kanemaru are no pushover, so expect a fun and thrilling outing with a clash of Junior and Heavyweight styles.

Prediction: Lee and Strickland get the win over the Suzuki-gun duo.

The Youngs Bucks will rejoin Bullet Club for the first time since they left the faction three years ago. They team up with the three-time IWGP Junior Heavyweight Tag Champion El Phantasmo, who joined the faction in 2019.

ELP is an excellent heel with an exciting move set who will gel well with the Jackson brothers against the team of Darby Allin, Sting, and former IWGP World Heavyweight Champion, Shingo Takagi.

Takagi is a formidable opponent and one that the Bullet Club trio will certainly struggle against. His partners have also proven their toughness, regularly offering up a combination of high-flying action and wild brawls.

Prediction: This match could go either way but expect to see Takagi and company take the victory, leading to friction between The Elite and Bullet Club further down the line.

After months of feuding, Eddie Kingston gets the chance to get his hands on his sworn enemy Chris Jericho once more at Forbidden Door. Jericho has reunited with his former Inner Circle Comrade Sammy Guevara and teamed up with NJPW’s resident psychopath Minoru Suzuki.

Prediction: Expect brutal action, stiff shots and some wince-inducing exchanges between Kingston and Suzuki. Once the blood has been spilt and all of the dust has settled fans will witness the Jericho Appreciation Society walk away with their hands raised in victory adding more animosity and anticipation for Blood and Guts. 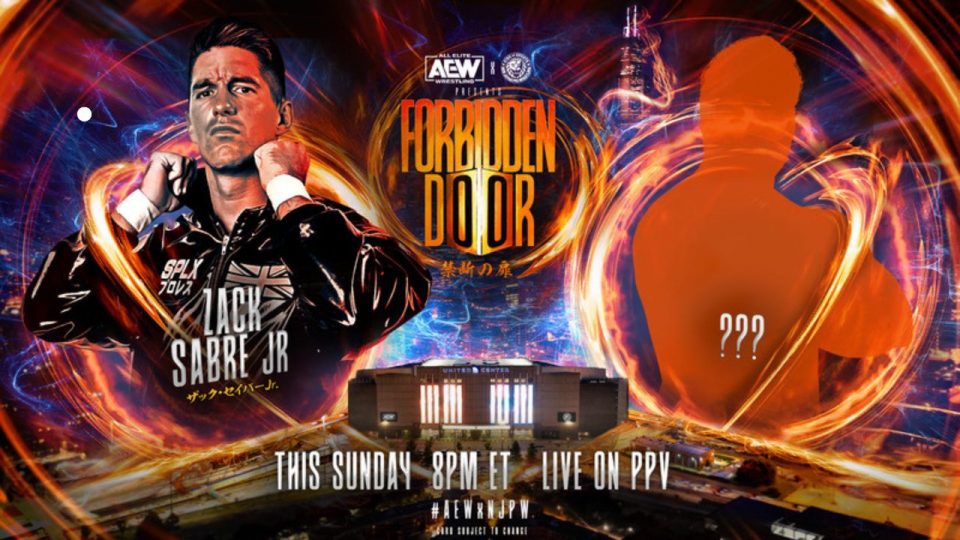 Zack Sabre Jr. was expecting to fight Bryan Danielson but unfortunately, the American Dragon had to withdraw due to injury. Danielson revealed that he had a worthy replacement in mind but ZSJ – and by extension, the fans – would have to wait for the PPV to find out who.

The wrestling rumour mill has produced names like Cesaro, Johnny Gargano and even Shane McMahon as the man to take on NJPW’s Technical Wizard.

Prediction: Whoever the surprise is they will undoubtedly have a brilliant technical match with Zack Sabre Jr. and leave the ring as the victor.

PAC vs. Miro vs. Malakai Black vs. Clark Connors for the AEW All-Atlantic Championship 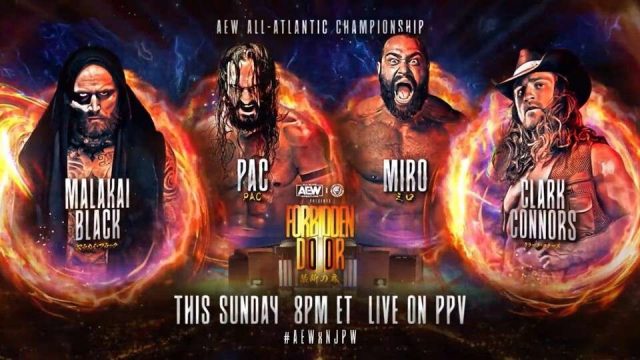 An Englishman, a Dutchman, a Hungarian and an American walk into a ring to fight for the newly created AEW All-Atlantic Championship in a Fatal Four-Way featuring three of that promotion’s best as well as NJPW’s Clark Conners – a late replacement for the injured Tomohiro Ishii.

All three of AEW’s competitors proved their mettle by qualifying for the bout in tournament matches over the past few weeks while Clark Connors may have a harder mountain to climb as he was originally the runner-up in NJPW’s own tournament to determine their representative. The participants add to the international tone the championship is based on while providing an intriguing match-up.

Prediction: All four bring their own style to the fight but after an enthralling battle, Black will emerge victorious as the inaugural All-Atlantic Champion. 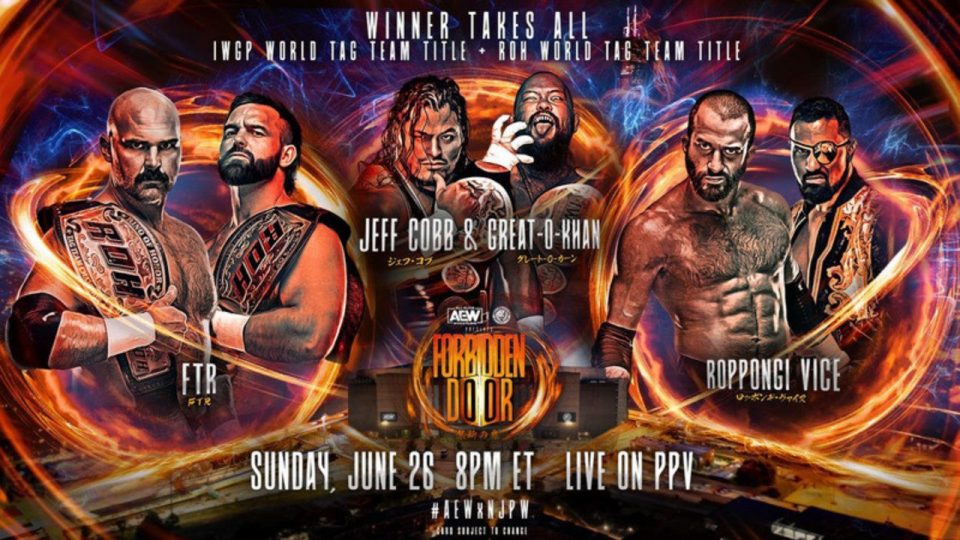 Despite all three teams possessing the ability to win, FTR are on an incredible roll. The pair already hold two other Tag Team Championships and are looking to add more to their collection.

Prediction: Arguably the best tag team in the world, Dax and Cash carrying the AAA, ROH and IWGP tag titles out of the ring will be the scene at the end of the match. 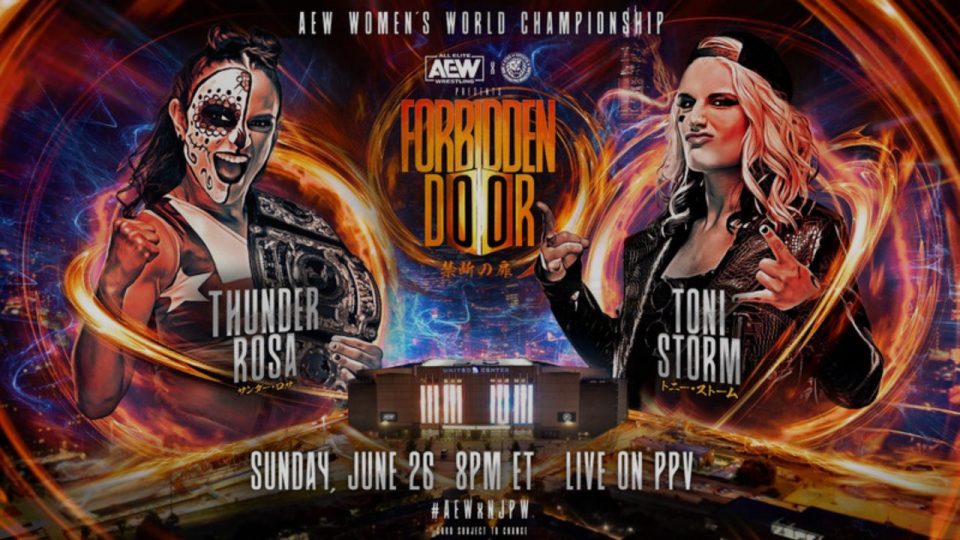 The only women’s match on the card – due to the lack of a women’s division in NJPW – is Thunder Rosa vs Toni Storm for the AEW Women’s World Championship. In keeping with the Forbidden Door theme, however, Toni Storm is well known for her time in the Japanese Stardom women’s promotion which is owned by Bushiroad, the same parent company as NJPW.

Storm and Rosa have mutual respect for one another and have recently helped each other out from attacks involving Marina Schafir. In the aftermath, Storm glanced at the title indicating her desire to challenge for it.

Since arriving in AEW, Storm has been rejuvenated and looks every bit the star she promised to be before her WWE main roster run. She brought name recognition and talent to AEW’s women’s division and very well could be the champion needed to elevate it further.

Prediction: She gets her chance at Forbidden Door but will have a tough fight on her hands against Rosa. Despite Rosa’s tenacity and toughness expect to see a new AEW Women’s World Champion crowned at the PPV.

Will Ospreay (c) vs. Orange Cassidy for the IWGP United States Championship 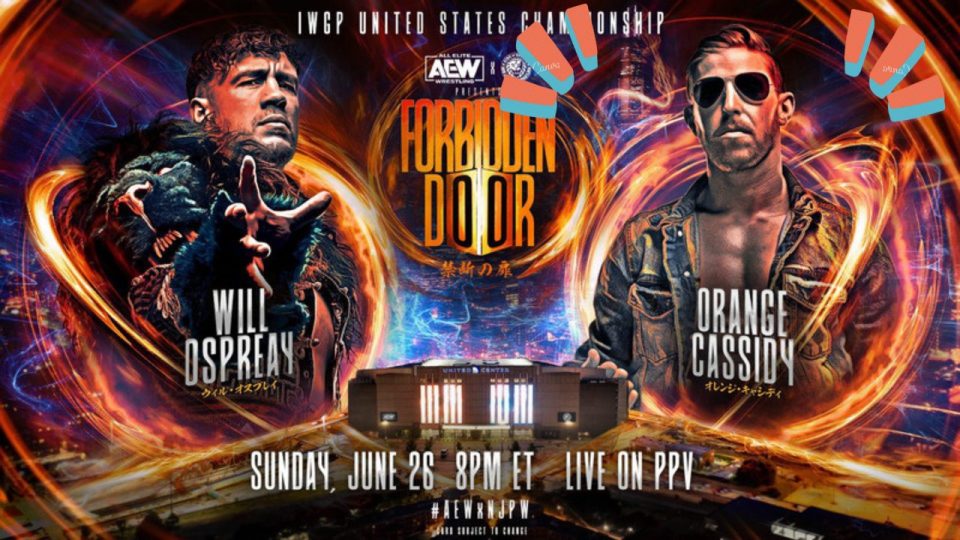 At NJPW Dominion, Will Ospreay won the vacant IWGP United States Championship and will defend it at Forbidden Door against Cassidy.

Freshly Squeezed got in the face of the leader of the United Empire after his match with Dax, ultimately setting up this championship bout.

The two gave us a glimpse of the fast-paced action fans can expect during their tag team match on the go-home edition of Dynamite.

Prediction: Ospreay is a human highlight reel but also a no-nonsense competitor and will be just too much for the denim-clad Cassidy on the night and successfully defend the title. 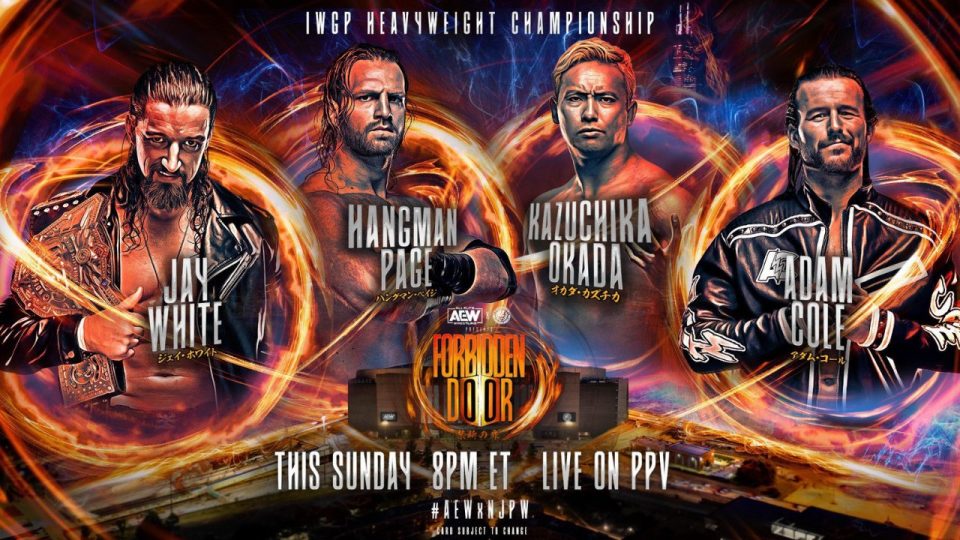 Jay White threw a wrench in Hangman Adam Page’s plans to challenge Kazuchika Okada for the IWGP World Heavyweight Championship by defeating The Rainmaker for the title at Dominion.

The Switchblade then headed stateside and declared there was nobody in AEW who had the clout to go after him and the title. This seemingly left both Page and Adam Cole without a match.

The following week, Okada brought all of his star power to the ring to stop a two-on-one attack by White and Cole on Page and it was later announced that all four men would take part in a match for the title at Forbidden Door.

Prediction: After a riveting and brilliant battle, the Hangman will leave Forbidden Door with the IWGP World Heavyweight Championship held high above his head. 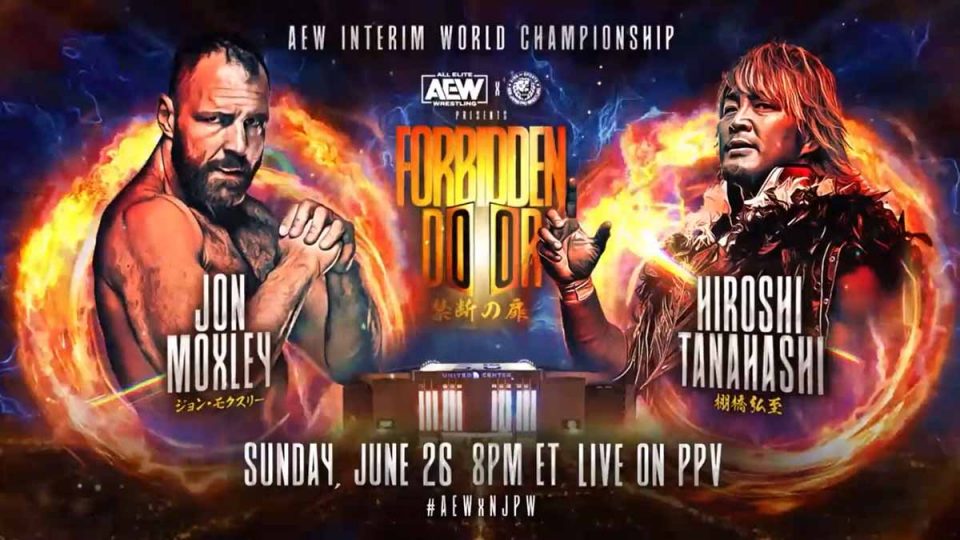 The main event of the show features a match years in the making with Moxley having had his sights set on Tanahashi as far back as 2019. They finally throw down for the chance to become the interim AEW World Champion.

The two battle-scarred veterans have decades of experience in high-profile matches, but headlining the first-ever inter-promotional PPV between the companies with the interim title on the line adds some history to the proceedings.

Their fighting and wrestling styles will bring out some interesting exchanges as Moxley uses grit and brute force to damage his opponent, while Tanahashi is a multi-faceted wrestler with an arsenal of moves some can only dream of.

Prediction: Moxley and Tanahashi will beat the hell out of each other in what should be a highly-charged war resulting in the Ace of NJPW, being crowned as the new champ and take to the title back to Japan.