AEW Full Gear returns to pay-per-view for the fourth year running. The event occurs on Saturday, November 19, 2022, from the Prudential Center in Newark, New Jersey.

As per usual the event is absolutely stacked and features a tonne of high-profile championship matches. One of the most notable matches on the card sees Jon Moxley defend the AEW World Championship against MJF in what promises to be an intense and undoubtedly bloody brawl.

Another major event happening at the show sees The Elite making their return to the promotion to take on Death Triangle to get back the Trios Championships they never lost.

The other title bouts have the Acclaimed defending the Tag Team Championships against former champs Swerve in our Glory. Toni Storm defends the Interim Women’s Championship against the formidable Jamie Hayter. Wardlow takes on Samoa Joe and Powerhouse Hobbs in a TNT Championship defence.

Chris Jericho puts the Ring of Honor World Championship on the line against Sammy Guevara, Claudio Castagnoli and Bryan Danielson in a Fatal Four Way match and finally, Jade Cargill puts the TBS Championship and her lengthy win streak up for grabs against Nyla Rose.

Plus we get several more attention-grabbing outings such as Saraya’s first match in five years and the Jeff Jarrett is in action against his old adversary, Sting.

Here are our predictions for everything going down at Full Gear. 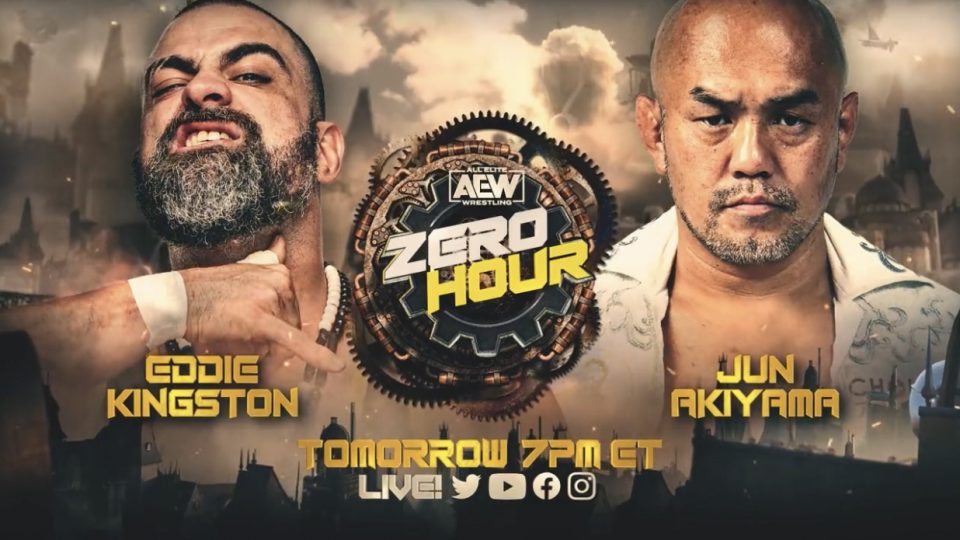 Kingston finally got his dream match against Akiyama in tag team action and saw the AJPW legend score the win. After the tag bout, Kingston demanded a singles match with Akiyama promising a fight Giant Baba, Antonio Inoki, and Rikidozan will be proud of.

Prediction: Best Friends get the win.

It just wouldn’t be an AEW event without a tournament. Brian Cage or Ricky Starks will fight for the right to enter finals on Dynamite for the chance to challenge for the World Championship further down the line.

Prediction: Ricky Starks needs to be positioned better within the promotion and winning this match is the right step forward.

Jeff Jarrett and Jay Lethal vs. Sting and Darby Allin 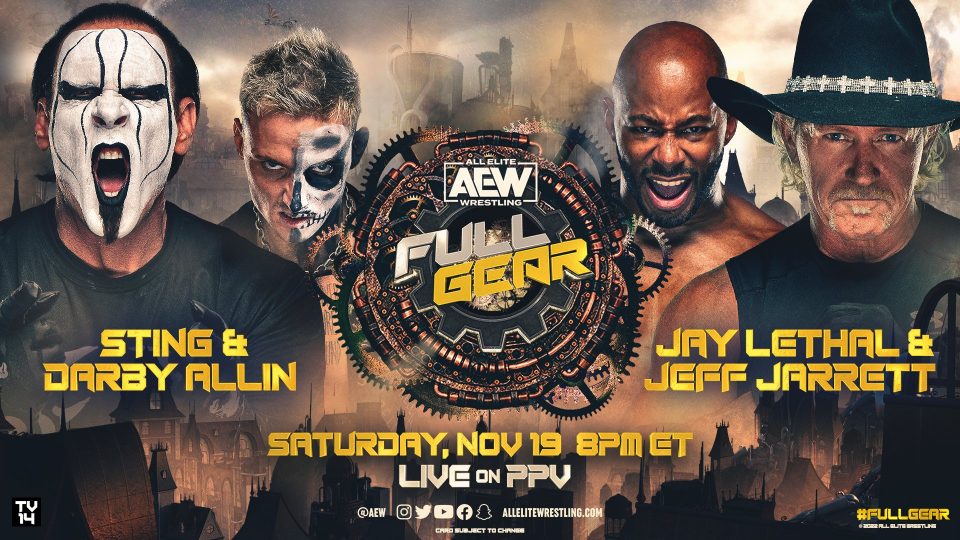 Jeff Jarrett made a surprise appearance at Dynamite levelling Darby Allin with one of his signature guitar shots aligning with Jay Lethal in the process. The following weeks saw Sting return to Allin’s side to take on his old WCW and TNA adversary.

Prediction: As absurd as it is to see Jeff Jarrett squaring off with Sting in a ring in 2022 it’ll at least be a fun spectacle. Jarrett is the newcomer and Sting is undefeated so it’ll be doubtful we see either of these two take the pin. So, expect to see Allin score the pin over Lethal. 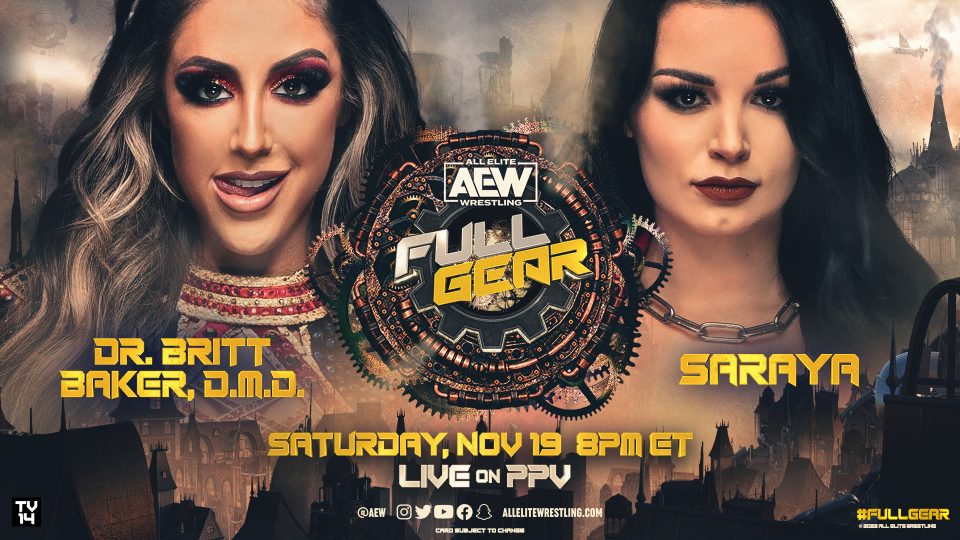 As soon as Saraya made her surprise debut at Grand Slam it was inevitable she would clash with Britt Baker. After several weeks of getting into each other’s business, the two exchanged some stinging words about who is the biggest star before the match was set when the former Divas Champion declared herself as 100% cleared for in-ring action.

Prediction: This is Saraya’s first match since retiring from in-ring competition due to a succession of neck injuries five years ago. While it is great to see her back in action it is a huge risk not only health-wise but match-wise too. But hopefully, the risk reaps the reward and we get a decent (and safe) outing from both and one that will see Saraya with her hand raised in victory.

Jungle Boy Jack Perry has been on the wrong side of this entire rivalry. First Christian Cage turned on him and smashed his head in with a Con-chair-to. Then Luchasaurus betrayed him in brutal fashion by chokeslamming him off the stage before his grudge match against Cage at AEW’s last PPV All Out. Since then Perry has been out for revenge and now gets the chance inside the steel cage.

Prediction: Despite getting some good old-fashioned payback on his former tag team partner and manager the bigger story is Perry vs Christian further down the road, so expect to see Luchasaurus get the win to continue the feud.

Jade Cargill will defend her TBS championship and undefeated streak against her biggest challenge to date when she faces former Women’s Champion Nyla Rose. This match comes after Rose, stole the championship from Cargill and has been holding it hostage ever since.

Prediction: Despite the powerful challenge from the Native Beast Nyla Rose, Jade Cargill’s TBS title and undefeated streak will remain unscathed at the PPV. 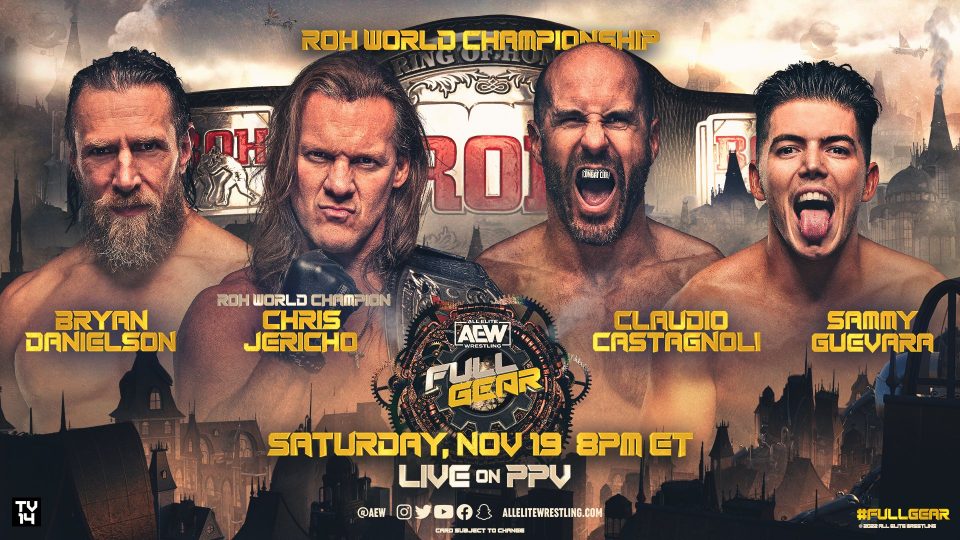 Ever since winning the title at Grand Slam Chris Jericho has made it his mission to bring dishonour upon the Ring of Honor name. In the lead-up to the PPV, the head of the Jericho Appreciation Society has beaten every former ROH champion he can find, which is something Danielson and Castagnoli cannot abide and want the title off Jericho.

Prediction: As much as Danielson and Castagnoli carry a huge threat to Jericho’s reign it makes much sense to keep him as champion with the ROH television slot seemingly coming in 2023. 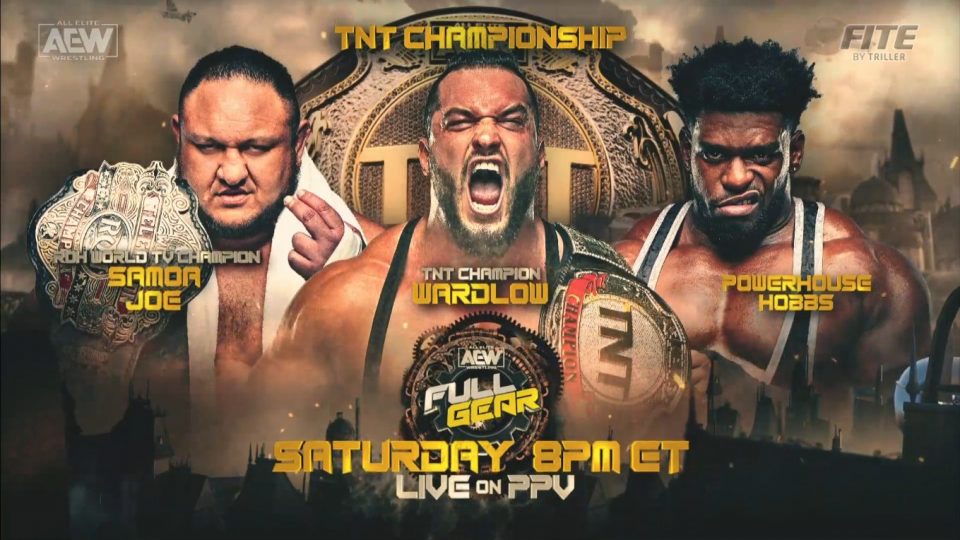 Powerhouse Hobbs has been after Wardlow and the TNT Title for weeks and the two looked to be on a collision course, but when Samoa Joe attacked the champ from behind a Three Way match was set for the PPV.

Prediction: This match promises to be a brilliant battle of the big men and hopefully the kickstart Wardlow’s career needs to get back on track.

Jamie Hayter has been working her way into title contention for some time now with impressive performances along the way while Toni Storm is doing her best with the interim card she was dealt. To add some extra spice the two women have a long history. They both broke into the business together and now find themselves on opposite sides of the title and a future date with Thunder Rosa for the Undisputed Women’s Championship.

Prediction: Storm has been a decent champion, but as per AEW women’s division booking, also positioned poorly leaving a lot to be desired from her title run. Hayter is riding a wave of momentum and fan support that would make a title win seem very possible and most likely probable as the promotion needs a women’s champion that the fans care and root for. 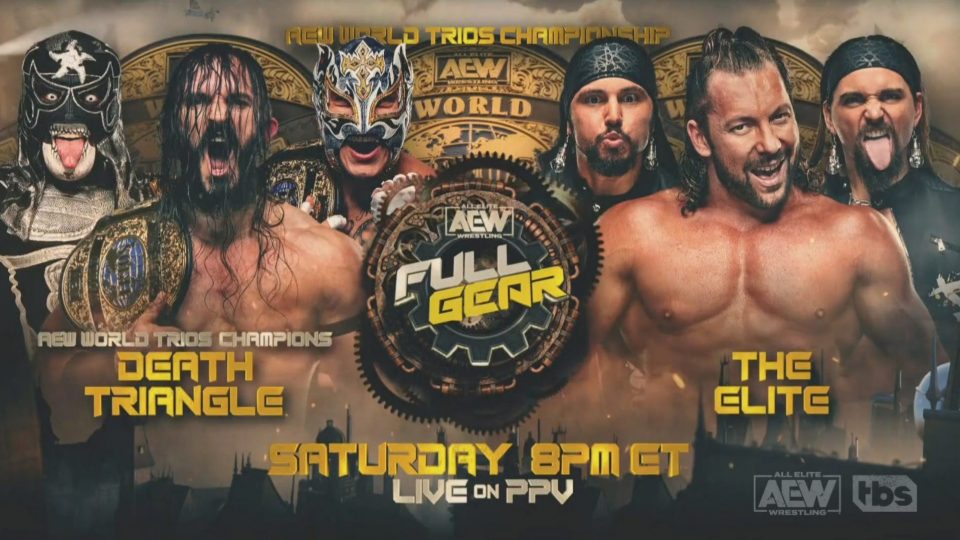 After being absent from AEW for over two months due to their All Out press conference suspension, Kenny Omega and The Young Bucks are back to reclaim the Trios Championships. Death Triangle captured the vacant titles and have proven themselves to be formidable champions and declared this is the matchup they have been waiting for.

Prediction: This will probably be the night match with the titles going back around the waists of The Elite. This means that the plans and storylines that were scheduled to take place before the All Out press conference debacle took place can be implemented into AEW programming going forward. 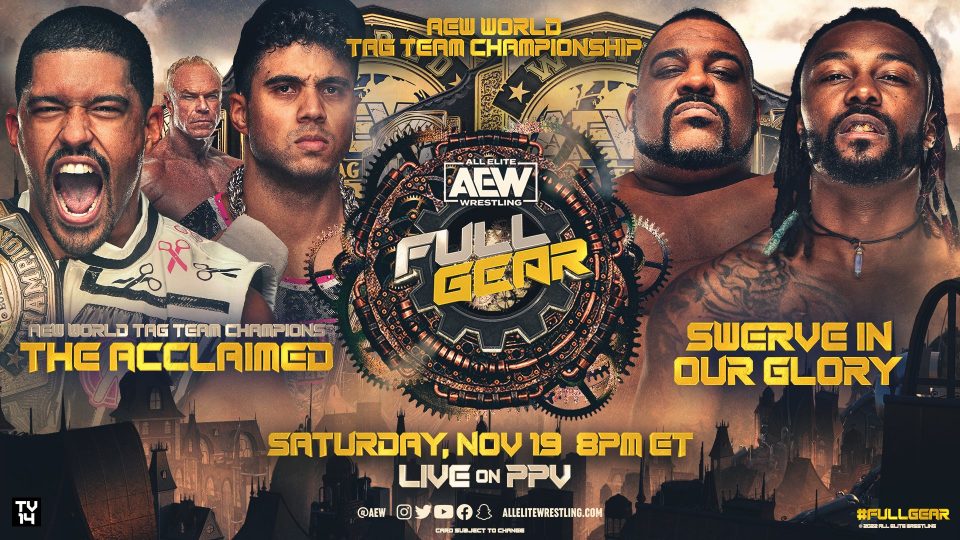 For the third time in as many months the Acclaimed and Swerve in our Glory clash for the tag team titles. The two teams stole the show at AEW’s last PPV which led to a rematch at Grand Slam where The Acclaimed claimed the titles. Since then they have continued to feud and saw Swerve Strickland handicap Daddy Ass so he couldn’t scissor Anthony Bowens.

Prediction: Before winning the titles The Acclaimed had the support of the fans but after becoming champions their popularity is in overdrive meaning there is no chance they are dropping the championships anytime soon. Plus Swerve and Keith Lee are on rocky ground and could very well not make it through the match as a team. 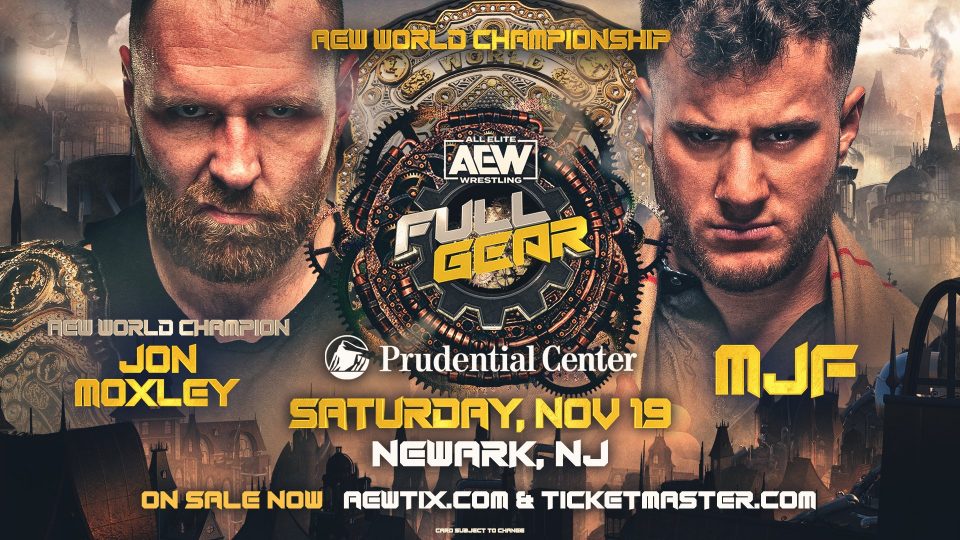 Jon Moxley added some stability to AEW’s title scene and firmly put the company on his back after the All Out Press Conference debacle. Then the MJF train came rolling in. His impassioned promos turned him from the promotion’s most hated man to its most popular. While Moxley and William Regal have questioned MJF’s integrity, the Casino Ladder Match winner declared his intention to face the champ one-on-one rather than cash in the poker chip unannounced.

Prediction: Everything in the leadup to the match is leaning toward MJF capturing his first title in AEW and it is definitely time to do it. But the big question is, in what way will he achieve it? MJF’s sudden crisis of conscience caused friction between him and his band-hired mercenaries, the Firm, who then took him out of action. Since the beat down the animosity heightened and resulted in MJF returning the favour.

However, all of this could be a predictable ruse. MJF constantly refers to himself as the Devil and despite being cheered has always kept the heel aspects of his character and could very well call upon the Firm or William Regal to help him win the title.

Be it as a heel or a face for MJF to win the title would mean a lot for him and AEW as a whole. Obviously, it further establishes him as AEW’s major star but it also drives the promotion’s original agenda of promoting the stars of tomorrow, which they have failed to do thus far opting for ex-WWE wrestlers to carry the promotion. AEW needs to get back on track as a true alternative to WWE and promote its young talent to truly differentiate it and MJF as its torch bearer is the way to go.

The event will stream live in the U.S. from the Prudential Center in Newark, NJ, on Saturday, Nov. 19, at 8 p.m. ET for $49.99 on Bleacher Report and internationally, fans can tune into the action on FITE TV.