Last year’s show was one of the biggest in the promotion’s young history. Held at the Arthur Ashe Stadium in Queens, New York the super-show saw then-AEW World Champion Kenny Omega battle Bryan Danielson to an epic 30-minute time-limit draw. The show was a huge success and this year’s extravaganza promises to be bigger and better.

Tony Khan has hyped up the show by claiming it as the highest-grossing event in AEW’s television history, with a gate of over $1 million. He is also promising big things to go down while likening it to Wayne’s World 2’s Woodstock-inspired festival, Waynestock. Speaking to News 12 New York’s Kurt Semder and Dan Serafin AEW President beamed:

“Yeah, big time. It’s gonna be really special. You don’t wanna miss this one. If there’s still opportunity for you to come Wednesday night and you’re a wrestling fan around New York, you do not wanna miss this. It is going to be, I believe — have you guys seen Wayne’s World 2? It’s gonna be like my Waynestock. It’s going to be like my Waynestock. I’ve been through a lot lately, and we’ve gone through a lot, and we’re gonna get — I’m telling you, it’s gonna be like Waynestock. It’s gonna be that one perfect night in New York City this Wednesday night. Expect a lot, and you shall not be disappointed. I promise.” [h/t to 411mania.com]

Khan has every right to be excited as this year’s mega show features five high-profile matches all of which have championships on the line.

With such a stacked card and with so much on the line, here are our predictions for AEW Dynamite Grand Slam. 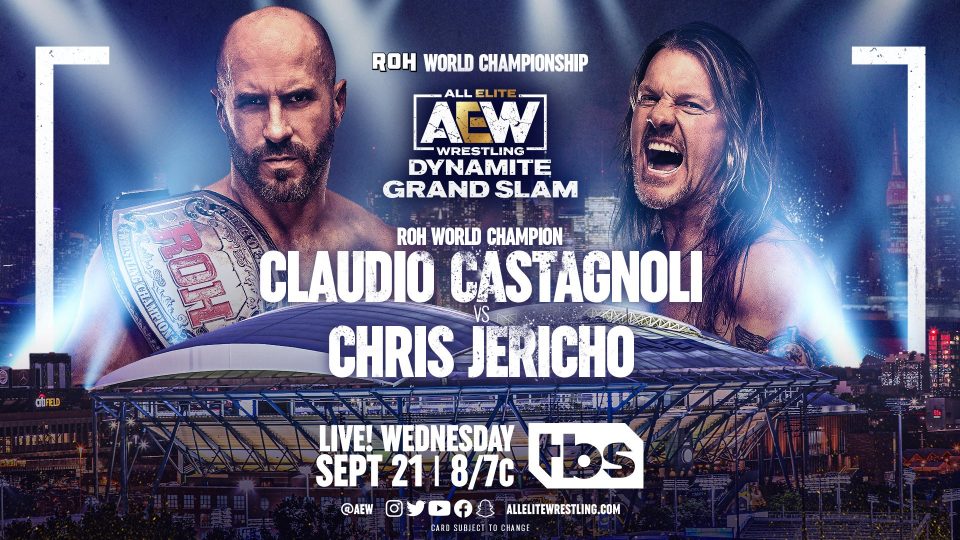 On the September 16th edition of Rampage, Chris Jericho interrupted Claudio Castagnoli during an in-ring interview. The leader of the Jericho Appreciation Society stated that as a seven-time World Champion it was time he went for his eighth and a title he has never held, the Ring of Honor World Championship.

As a proud fighting champion, Castagnoli accepted the challenge, and now the two members of the continuously warring factions will fight for ROH gold at AEW Grand Slam.

Prediction: After his impressive battles against Bryan Danielson and Jon Moxley, Jericho continues to turn back time and show that he has still got it against yet another supreme athlete in Castagnoli. The champion and challenger have met previously in the chaotic, multi-man mayhem that was Blood and Guts, they are yet to wrestle one-on-one in AEW.

Regarding the result of the bout, Castagnoli makes a perfect ROH World Champion, but it would be great to see the rejuvenated Lionheart Chris Jericho capture the title he has never held. Jericho as ROH champion also gives the promotion a recognisable face and name to help it grow and get that much-needed television deal. 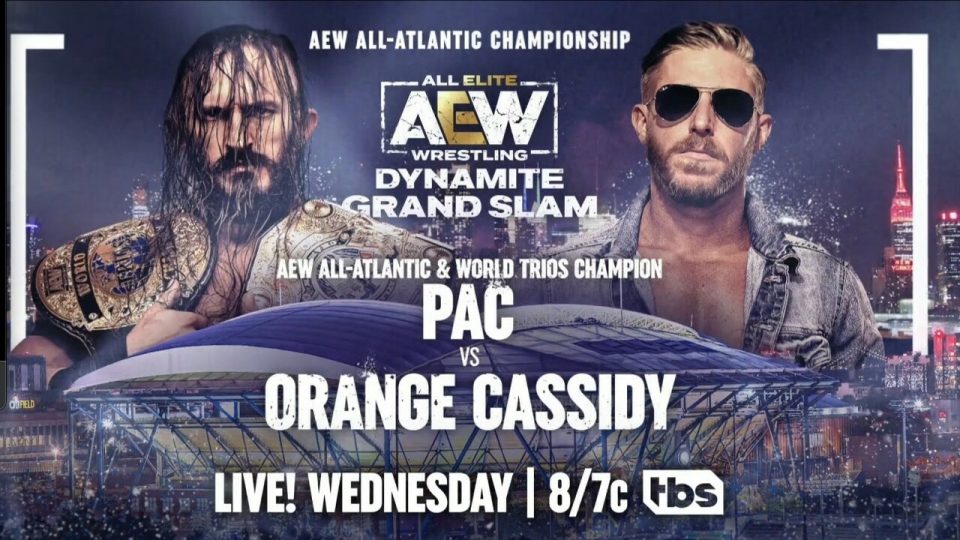 PAC became the inaugural AEW All-Atlantic Champion at Forbidden Door. He has since successfully defended it four times and now looks to do it for a fifth against his old enemy, Orange Cassidy. The denim-clad Cassidy has been a constant thorn in the side of PAC as of late and laid down the title challenge by planting the champion with an Orange Punch.

Interestingly the Bastard PAC and Orange Cassidy do have a history. The two clashed in a breathtaking 2020 encounter at AEW Revolution. Despite Cassidy’s surprisingly high-octane offence PAC claimed victory and will be aiming to do so again, but this time with a title on the line.

Prediction: The champion and challenger have a unique feud. PAC, the stoic, no nonsense wrestler has no time for Cassidy’s antics and is angered by his mere presence while Cassidy’s lethargic persona and mind games make perfect ammunition for his opponent to make mistakes.

Despite these opposing styles, these two in the ring create explosive action resulting in a flurry of furious strikes and excellent aerial acrobatics. After what will undoubtedly be a thrilling contest the outcome of the match will see PAC retain the championship.

After winning the Interim AEW Women’s Championship at All Out in a Fatal Four-Way match, Toni Storm defends the title for the second time in another Fatal Four-Way at Grand Slam.

All four competitors were in the ring together recently in a tag team encounter that saw the Storm and Athena take on Deeb and Baker. The babyface duo fell to the heels but what happened after the match added a further veil of interest over the Grand Slam title bout.

During the title match at All Out, Britt Baker stopped her partner Jamie Hayter from scoring the win for the title by dragging out the referee. Hayter was left enraged while Baker tried in vain to apologise claiming a heat-of-the-moment mishap. So, when Hayter arrived on the scene in a post-tag team match beat down and grabbed a chair off Baker before levelling Storm and walking off showed that all is not well over on team DMD.

Prediction: Apart from Baker no one else is ready for the job as a Women’s Champion especially with regard to elevating the division. Ever since Baker lost the championship the division has suffered greatly and to have her at the top once again could mend some of the damage. However, expect to see Storm retain after some interference/payback from Jamie Hayter will cost Baker the match and set up a feud between the two going forward. 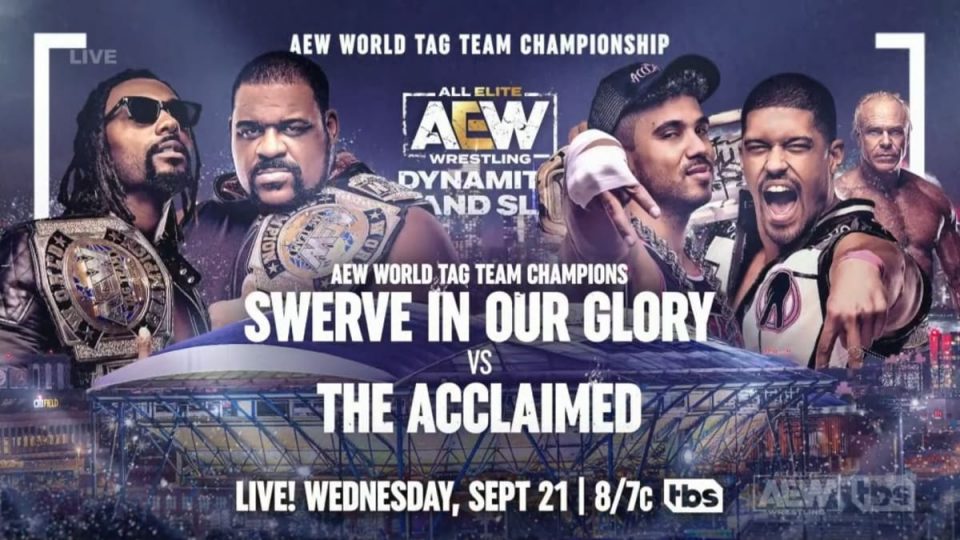 In a rematch from All Out, Swerve Strickland and Keith Lee defend their AEW World Tag Team Championships against The Acclaimed at AEW Dynamite Grand Slam.

At the PPV the Acclaimed received overwhelming support from the live audience much to the chagrin of Swerve and especially Lee. Visibly irked by the response their opponents garnered the champions leaned into the heel aspects of their characters to retain the titles in an excellent contest.

In the weeks following the match, the two teams have been at odds without getting physical, which adds more anticipation to the title bout.

Prediction: Lee and Swerve are a fun and innovative duo, but something just hasn’t quite clicked for them as champions and it would be much more effective to have them as singles talents.

The Acclaimed have become one of the most over acts in wrestling. The rap, catchphrase, and hand gesture undoubtedly helped them achieve their popularity, but Bowens and Caster are also highly-likable and much-deserving champions. Expect to see new AEW Tag Team Champions shouting “Scissor me Daddy Ass” at the end of the match. 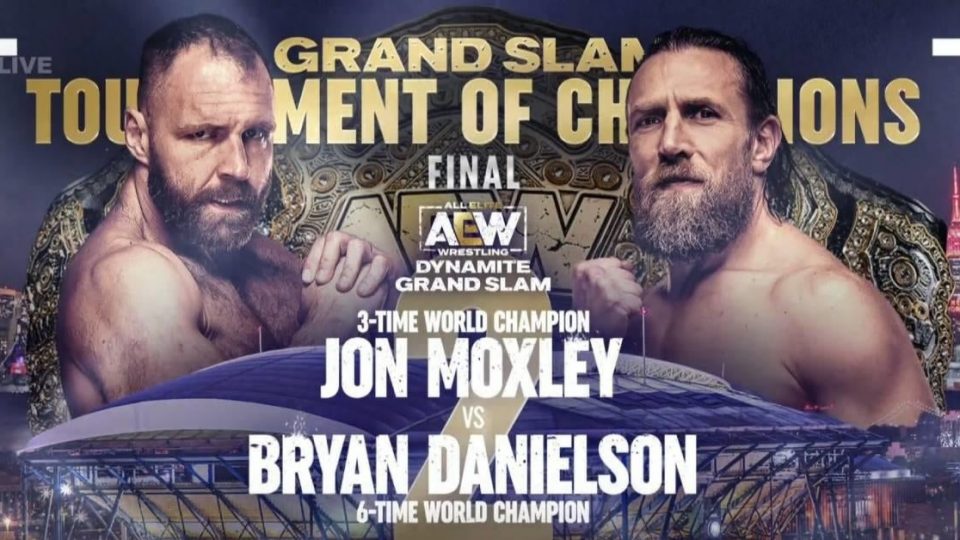 This is the match we are all here for.

After weeks of turmoil resulting from the fallout of the now infamous post-All Out Press Conference, AEW look to steady the ship with the constantly dependent Jon Moxley and Bryan Danielson.

The brief but impactful tournament to crown a new champion reaches its crescendo in a spectacular fashion. Two of the best professional wrestlers on the planet going head-to-head in a title match that will have the eyes of the wrestling world upon it. The intrigue caused by vacated championship makes this one of the most important matches in AEW history. The promotion is in need of stability and there is no one better to bring it than the two participants involved.

Moxley has already firmly put the promotion on his back and in a brilliant and powerful promo, declaring to bring honour and prestige back to the title while Danielson is a consummate professional who exerts integrity and nobility in whatever he does.

The two members of the Blackpool Combat Club have already beat each other black and blue when they met at AEW Revolution earlier this year. Their brutality led to respect and the creation of the BCC. The faction promised to bring realism and legitimacy to the promotion through the art of violence and now they get to prove it for the vacant AEW World Championship.

Prediction: Regardless of the winner, this match is going to be amazing. But, it can be argued that the future of the company rests on the outcome of the match. After a succession of failed title reigns, the AEW World Championship needs someone to carry it with passion and meaning.

Moxley is the safe bet here. He is a tried and tested champion with the credibility to reinstate some glory on the title and promotion, but it will be surprising to see him win it for the third time.

The American Dragon as AEW World Champion has a special ring to it and one that would bring all of the kudos that Tony Khan wants and needs. However, the ominous shadow of MJF and his casino chip looms over proceedings. As the undeniable future of AEW, MJF possessing the right to challenge for the championship at any time will halt Danielson’s celebrations and see the Salt of the Earth capture the title and lead AEW into the promised land.