WWE has released many action figure toy lines over the years, sometimes producing some utterly bizarre concepts that boggle the mind…

You may feel slightly trepidatious revealing your wrestling fan-hood to certain folk. It’s ok, we’ve all been there and experienced the dumb questions asked by the cretinous few who can’t seem to conceive why people enjoy things that they don’t.

Over the years wrestling figures have evolved from the statue-like Hasbro and LJN lines with minimal movement to the super detailed, multi-articulated works of art that Mattel and Jazwares are currently spoiling us with.

With the countless varieties and variations to choose from toy companies have sometimes had to think outside of the box to create the next must-have miniature for kids to have fun with, or to stand out on collector shelves.

The results can be utterly insane, weird, scary, but almost always wonderful in one way or the other. Here are some of the weirdest to ever grace toy shop pegs. 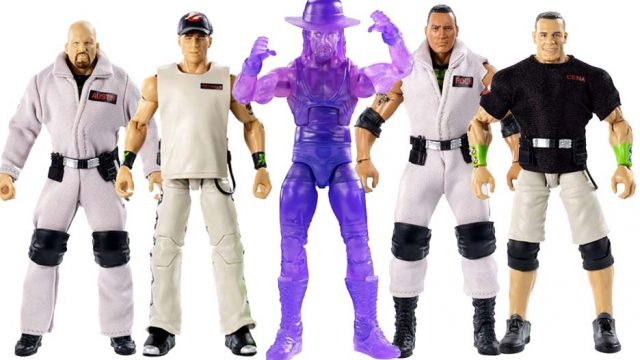 Mattel owns the toy production license to quite a few famous properties meaning there are some insane cross overs they can produce. But just because you could, does that mean you should? Yes. Absolutely.

First off we have the WWE Ghostbusters. Debuting as a Comic-Con exclusive, Venkman, Stantz, Spengler and Zeddemore, the fab four of supernatural spook catching, have been replaced by Shawn Michaels, The Rock, John Cena and Steve Austin.

As if this strangely specific fan fiction come to life wasn’t enough, the ghost these grapplers turned scientists are trying to catch is none other than WWE’s resident ghoul The Undertaker, presented in a lovely transparent purple. There is no Dana, only Callaway.

Sadly there is no vehicle in the line, yet. But if don’t yearn for some kind of Austin pick-up truck/Ecto-1 hybrid then maybe you should call the Ghostbusters yourself, as you are dead on the inside. 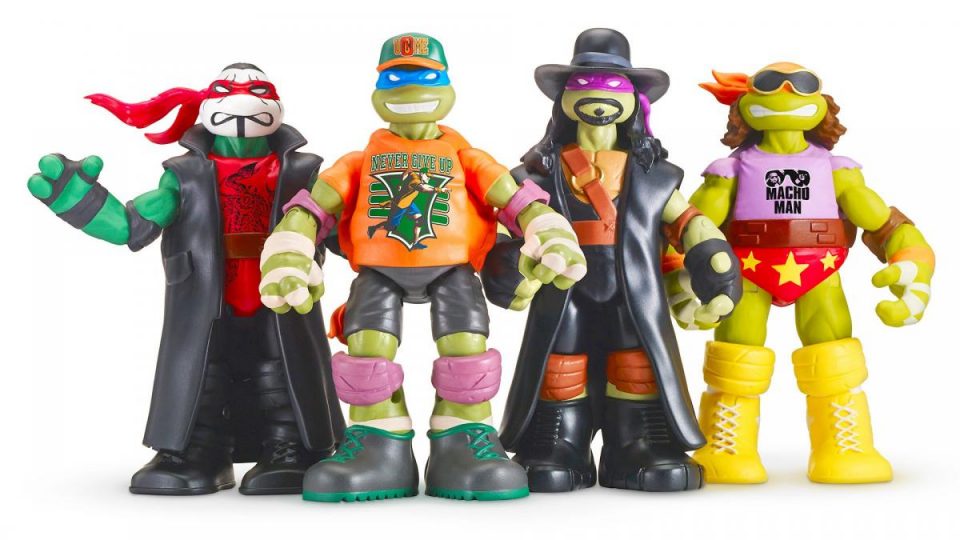 The heroes in a half shell enter the WWE Universe with this second crossover, and no, we are not talking about the Duane Gill or Barry Hardy Toxix Turtle gimmicks, although action figures of those two would be radical.

This crossbreed holds some sense. Well, barely, but Kevin Nash famously portrayed Super Shredder in TMNT 2 (the first one) and Sheamus donned the mo-cap suit for rhino bastard Rocksteady in TMNT 2 (the second one) so at least there’s some history.

The turtles pull double duty with this one. Leonardo leads as either John Cena or Finn Balor, Donatello does machines as Undertaker or Ultimate Warrior, Raphael is cool but crude (or is it rude? Could never work out that lyric) as The Rock or Sting, and Michaelangelo is a party dude as Roddy Piper or Macho Man. Cowabunga indeed.

Masters Of The WWE Universe 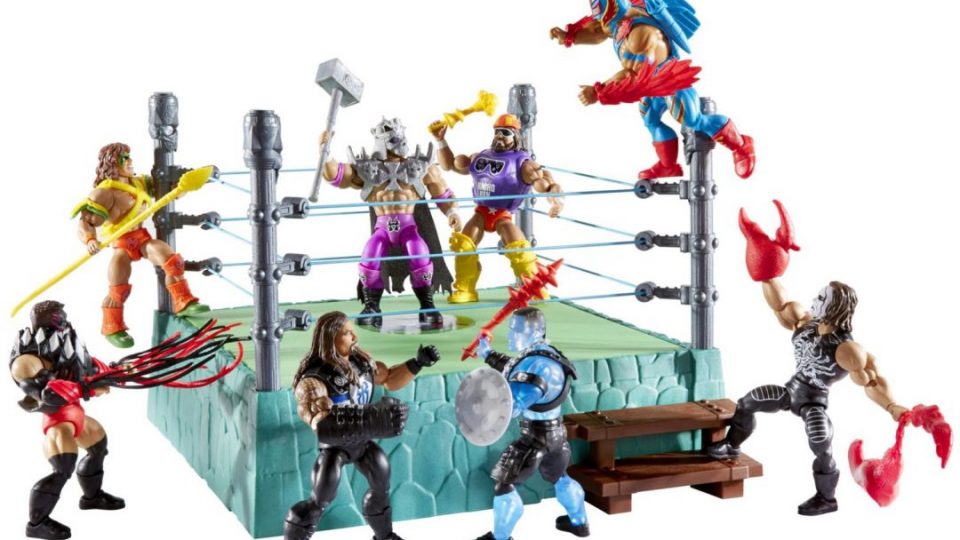 If someone tells you to think of scantly clad, muscular, heavily gimmicked characters slapping the snot out of each other, they could be talking about either pro wrestling or Masters Of The Universe, so by that rationale, a cross over seems perfect.

There are quite a fair few of these and they are all brilliant. Highlights include Bret with pink visor and sword, and gold-clad gauntleted Mr T and Jake Roberts with a removable face that conceals his true reptilian nature.

On top of that, you also had the ultimate action figure playset, a Castle Grayskull WWE ring! This beautiful squared circle is covered in trademark Grayskull greenstone, making it the perfect platform to display your collection. 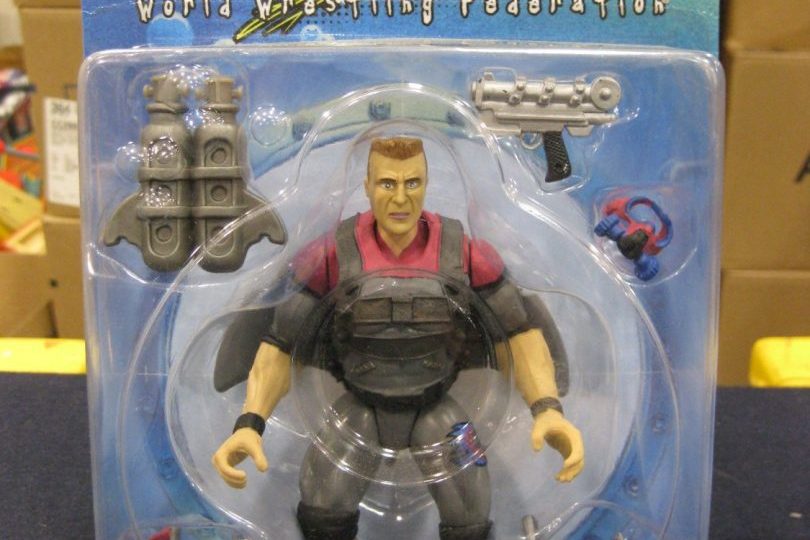 It may sound strange but it was rather hard to buy a standard action figure of your heroes in the ‘90s.

S.T.O.M.P was pretty much the WWE equivalent of this. Series one was supposed to be military-themed, but at the end of the day, it was basically wrestlers with flak jackets and machine guns that probably confused a lot of children and parents.

Series 2 went more into the fantasy route rather than the mass shooter one, which was probably for the best, with its underwater range. This meant giving Chyna fins and Stone Cold a snorkel.

Finally, series 3 took superstars to the regular stars by making them spacemen with helmets and masks that barely clicked on. No wonder this line only lasted just over a year. 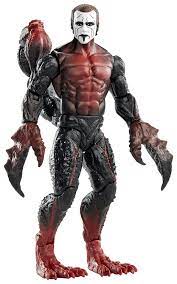 We already covered Mutant Turtles in this list, now it’s time to look at some standard, everyday Mutants.

These figures imagined WWE Superstars doing a Marvel comic style transformation into their gimmicks. Does Sting like scorpions? Then let’s turn him into a scorpion man.

Finn Balor is a Demon King with Venom inspired make-up? Let’s turn him into a symbiote monster.

Yes, some of these may have been confusing, like a shiny silver John Cena, but some of these were also rad, like crocodile Wyatt.

The sale tag line of “Get Infected!” is a bit nasty, especially post 2020, and it isn’t really clear what caused these drastic mutations. I like to think it involved an out of date keg of ICO PRO. 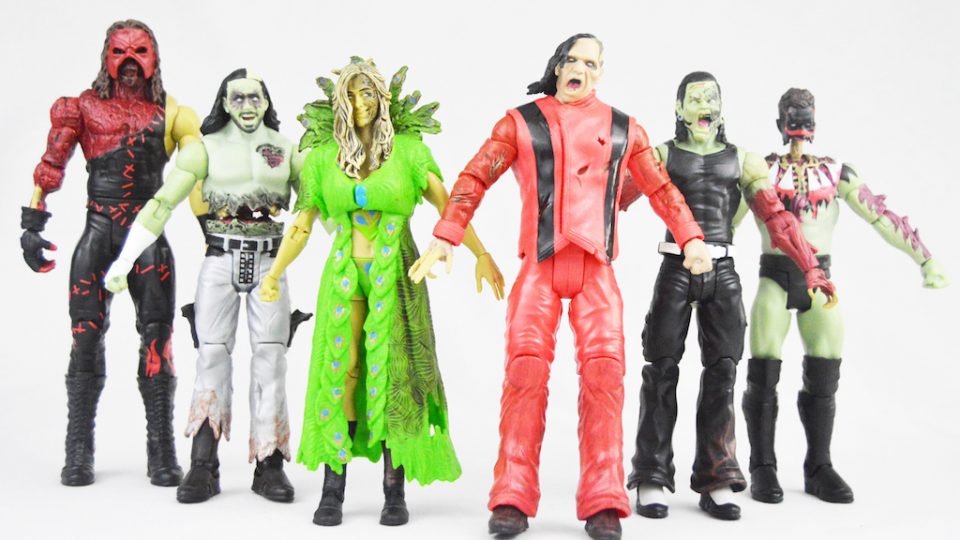 People love zombies. Lord knows the WWE does. From poor old Tim Arson being beaten by Sandman with a kendo stick to The Miz being eaten alive by developmental in make-up, the living dead seems to be a popular theme for the sports entertainment brand.

Starting as a Halloween photoshop post, the WWE released the zombie designs of wrestlers as their own toyline in 2016.

The trouble is, when the figures inevitably fall on desktops and display shelves as they ALWAYS do, they stop becoming re-animated corpses and become just, well corpses. WWE Superstars who died in horrifically violent ways. Here kids, go play with this.

A round of applause for Michael Jackson Thriller inspired Shinsuke Nakamura though, and The Undertaker – as the Deadman is already dead – he just looks the same but slightly greener with glowing hands. Genius. 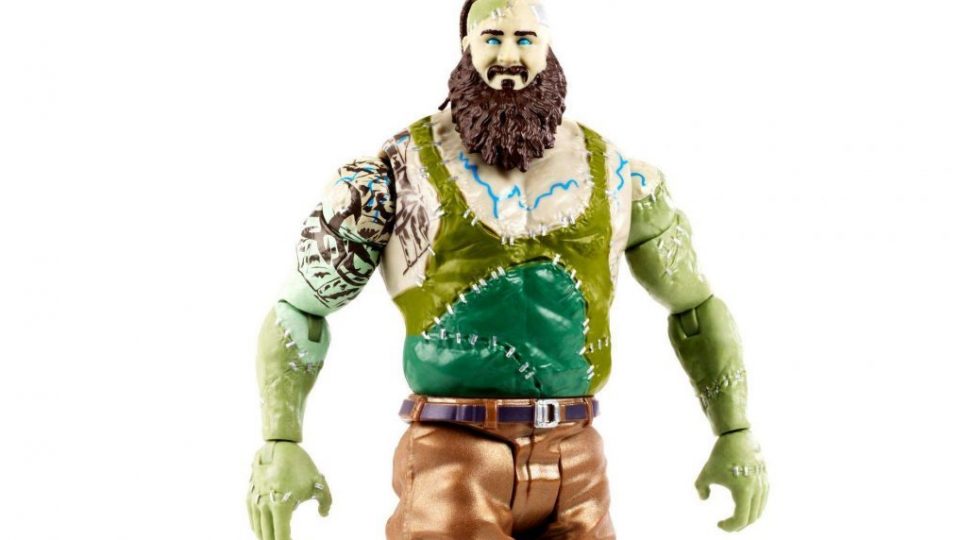 After the silent success of films such as Phantom Of The Opera and The Hunchback Of Notre Dame in the ’20s, in 1932 Universal Pictures released one of their early talkies, Dracula starring Bela Lugosi.

What followed was a surge of monster flicks such as Frankenstein, The Mummy, The Wolfman and a whole wave of horror that would cement how these ghoulies would appear in the public conscious for the next century.

Trouble is, the Universal Monsters are property of, well, Universal, but that doesn’t mean there aren’t certain loopholes companies can exploit to have similar beasties in their features, events, and Poundland Halloween costumes.

Take Tri-Star’s 1987 film The Monster Squadfor example. It gave us the royalty-free Frankensteins creation, put the electrodes on his forehead rather than his neck and boom, you have a legal pastiche.

In 2018 WWE decided it was time for them to jump on the bandwagon, and unleash upon the world their “Monster” toyline which gave us the likes of Vampire Taker, Mummy Jericho, Wolfman Reigns, Phantom Asuka, Frankenstein Braun and…Jake Roberts with two really big snakes.

Was it too much to add gills and hint that he may or may not have come from some kind of legally distinct Black Lagoon? 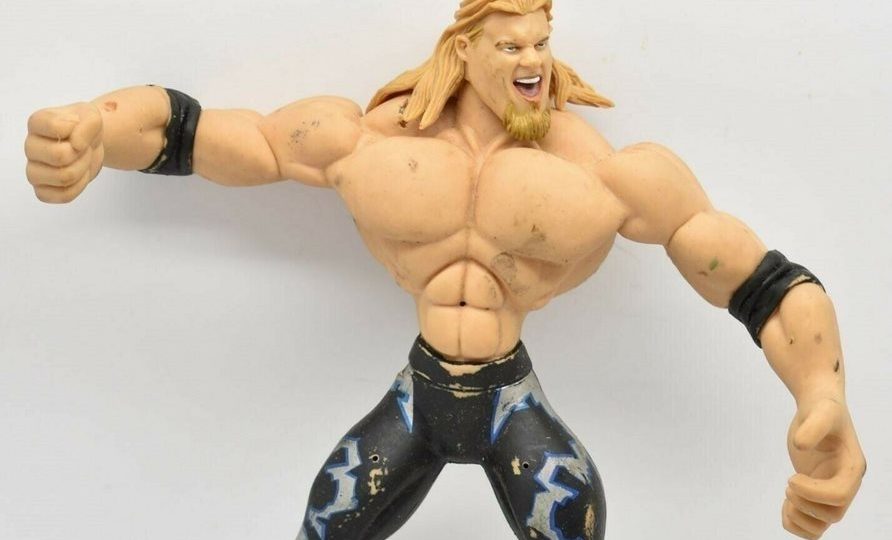 The Flex ‘Ems line, debuting in 2002 and produced by Jakks Pacific, gave us some truly horrific interpretations of WWF wrestlers.

Tiny hips with giant shoulders gave a Hulk-like vibe (Marvel comics, Not Hogan, although a ’90s steroid trial joke here is tempting) due to rubbery muscles over a wire type frame that would perish and fall apart after years of play.

Thing is, the Flex ‘Ems were also incredibly popular. With no fixed points of articulation, you can bend and pose your figures into pretty much any shape you like, allowing consumers to pit their favourite superstar in screen accurate poses and move positions for the first time.

Despite their nightmare-inducing appearance the Flex ‘Ems sold well and went on to produce 14 waves of the line, featuring superstars such as Kurt Angle, Batista, Brock Lesnar, The Rock and whoever else was popular during 2002-2005.

Ever taken a look at your wrestling figures and thought to yourself “these are great and all, but I wish they would splodge liquid all over my hands when I played with them”?

No? Oh. Well, maybe the Maximum Sweat figures aren’t for you, because that’s exactly what they did.

Not content with the natural shine plastic gave wrestling figures anyways, Jakks Pacific Maximum Sweat line had a plug in the back which you could fill with water, which would then expel from various points of the figure’s body when you gave them a little squeeze.

I honestly tried to type that last paragraph to make it sound as un-filthy as possible, an impossible task.

Like the Flex ‘Ems these figures were also shaped like giant muscle-bound freaks. Unlike flex ems, you couldn’t flex em. They had barely any points of articulation so once you filled them up they kind of just stood there and sweated. An effect is easily replicated by just visiting a local theme park line on a hot summer day.

They did have one cool aspect, mind you. The Kane figures mask came off, revealing a burned face underneath which was insanely cool for 1999.

With Mattel owning many more toy licenses as well as WWE, and AEW’s broadcast channels being owned by Time Warner, let’s hope there are many more toy cross overs to come, and if not, let’s hope someone at least produces some more weird shit.

Or give us both and produce some weird cowboy shit like an Adam Page/Blazing Saddles mash-up. If it’s legally possible, make it happen!