Many wrestlers have used the six-string to further their career, whether they could play the guitar or not.

Rock ‘N’ Roll has been a part of wrestling since the early ’80s. Long hair and mullets, LYCRA and glam gear, and loud music pounding throughout the arena, there was a reason the late ’80s boom is known as the Rock ‘N Wrestling era.

Heck, it was even the name of Hogan’s animated show.

With the audience clad in merch they brought from outside vendors, drinking beer and clapping along to the in-ring action, modern wrestling is probably more akin to a music festival than the faux sports events of old.

So it makes sense for a wrestler to have a rocking gimmick, right? And what says rock n roll more than a geeeeetar?

Many wrestlers have carried an ax on their way to ringside, even though some couldn’t play a note to save their lives. Today we are looking at six of the greatest hits, although some could probably be considered more like one-hit wonders.

Honourable shout-out to The Rock and Steve Austin occasionally whipping out an acoustic for a sing-along, the West Texas Rattlesnakes (they really didn’t like rap) or Hollywood Hogan doing a Bill and Ted and busting out an air guitar whenever he could.

At least Hogan could actually play the guitar, unlike…

Ron Ferris started his career as “Wayne Ferris” and enjoyed tag team success towards the end of the ’70s with Larry Latham as “The Blonde Bombshells” in the Tennessee area.

He didn’t develop the Elvis impersonator gimmick until he headed up north for Stu Hart’s Calgary Stampede Wrestling, and didn’t even grab a guitar until sometime after that.

Back down in the States working for the Robert and Ron Fuller-owned South Eastern Wrestling, Robert once asked Honky if he knew how to play the guitar. Ferris replied “No, not really” but the Fuller’s gave him one anyway and the rest would become history.

Honky would use a gimmicked guitar to smash against his opponents, giving him a heelish edge.

According to some, one famous incident on Jake The Snake Robert’s Snake Pit interview segment, Honky Tonk Man accidentally smashed Roberts with a real guitar, injuring him in the process. Jake would even claim that the injuries he suffered as a result of the impact led to his addiction to pain killers.

Ferris has denied this multiple times, but looking at the footage, if the guitar was gimmicked, that’s some pretty hard balsa wood! 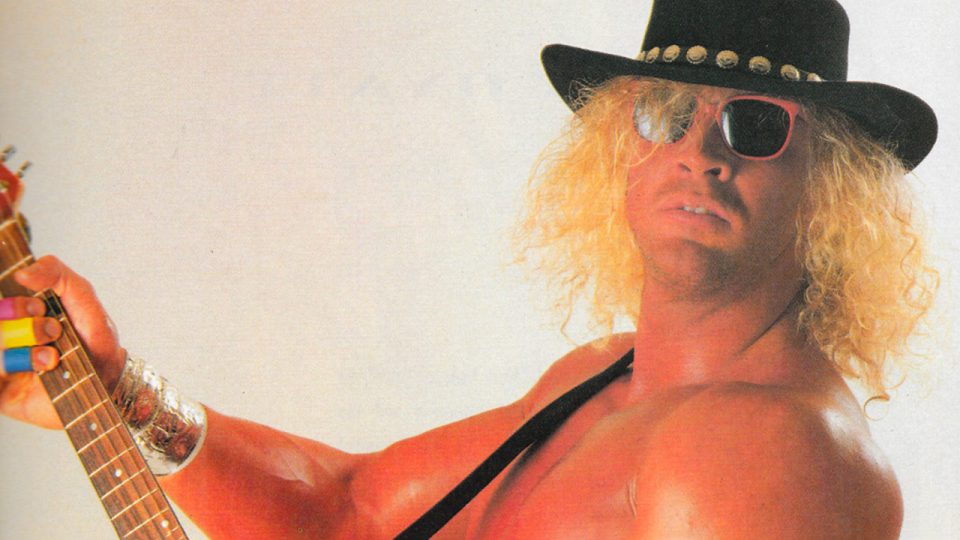 In 1991, music was undergoing a major shift. It was the dying days of hair metal, with grunge classics like Nirvana’s Nevermind, Soundgarden’s Badmotorfinger, and Pearl Jam’s Ten all making their debut that year.

Yes, the days of hairspray, flying V’s, and rhinestone leather pants were coming to an end, making way for the voices of a disillusioned generation…

But nobody told Van Hammer!

Making his debut in 1991 for the North Georgia Wrestling Alliance, Mark Ty Hildreth originally wrestled under the name The Hammer, before WCW snapped him up in September of that year.

Slapping a Van at the beginning of his name and a rock star gimmick on his personality, Van Hammer certainly looked like he could play a lick or two.

But as he made his way to the ring it became evident that wasn’t the case. He would hold his Flying V above his head like a sword, in front of his crotch like another type of sword, over his shoulder, behind his head, basically any way apart from how a real guitar player would hold it.

Van Hammer would turn to the grunge side eventually, when he joined Raven’s Flock in 1997, about three years after the grunge boom had ended.

Still, Hildreth was a good worker and enjoyed a lengthy career spanning over ten years, a run longer than most of the bands he was trying to imitate. 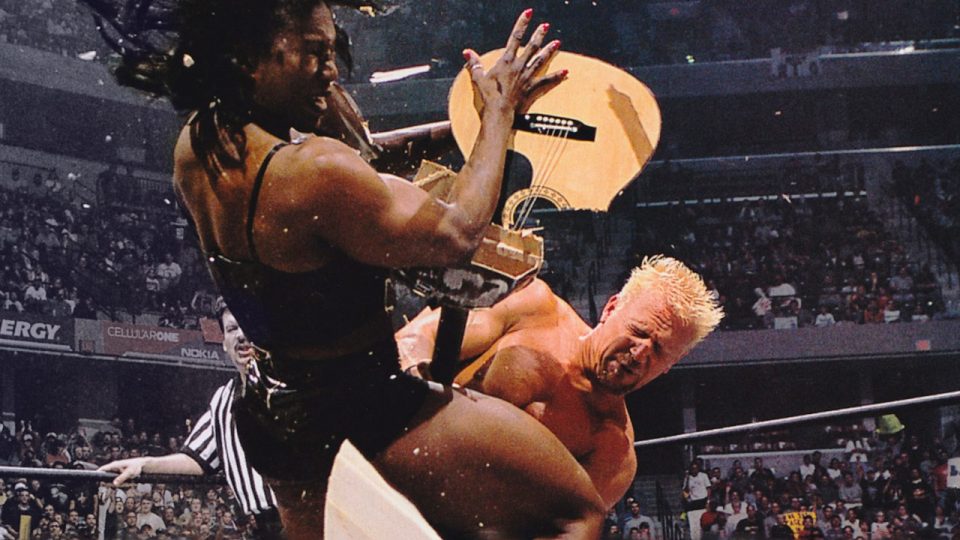 Jeff Jarrett may have broken 6000 guitars, but despite what Mike Graham says, it drew enough dimes to keep the trusty El Kabong (the nickname of his guitar he picked up from the cartoon horse “Quick Draw McGraw”) by his side for the majority of his career.

After six years of active wrestling in the business he grew up in, Jarrett first came into the WWF in 1992, but wouldn’t start wrestling full time for the fed until 1993.

It was then he debuted the Double J gimmick, a country singer who was only using professional wrestling to further his music career. Despite carrying a guitar, Jeff would never actually play his instrument, not even in the “Baby Tonight” music video, but would use it as a weapon to get the advantage over his opponents.

The fact that Jeff couldn’t play the guitar only added to the reveal that he had faked it to make it, with his Roadie Bryan James being the true singing sensation.

Like Honky, Jeff’s guitar shots became iconic, maybe even surpassing the Elvis impersonator. Unlike Honky, Jeff’s gimmicks would evolve over the years, keeping him fresh as he made his way from company to company throughout the decades.

One thing that would remain constant, even after being caught with his Milli Vanilli ways, was his guitar. Jeff continues to use his weapon of choice to this day most recently kabonging the likes of Matt Cardona, Effy, and more. 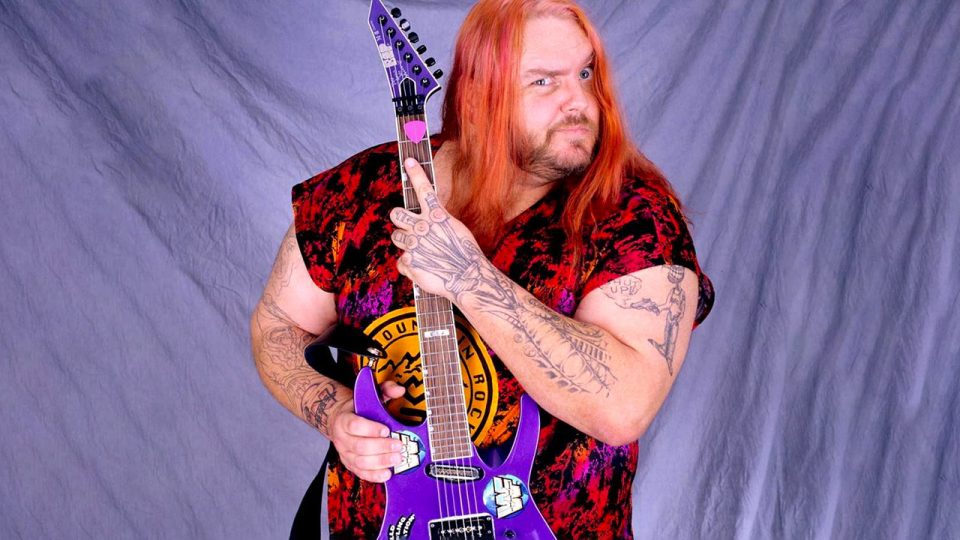 Peterson would wrestle under that moniker with various spellings for various companies until he was released by WCW in 1995. The very morning he was let go, he was contacted by Rick Rude, and got a spot in the WWF.

The WWF gave him a new name, in tribute to Man Mountain Dean, given an electric guitar gimmick, and would play a couple of licks before his matches.

Man Mountain Rock could indeed Rock. Peterson knew how to play the guitar and so would shred in a darkened arena with concert-style lighting.

As time went by, his guitar would evolve into his now infamous WWF logo instrument.

Unfortunately, years of nagging injuries, including a serious hernia he suffered in WWF, led to a substance abuse issue, that led to his release in October of 1995.

Later on down the road Peterson would go on to sue Rockstar Games, the creators of the Max Payne franchise, for gimmick infringement in 2003, and received a settlement out of court for his efforts. 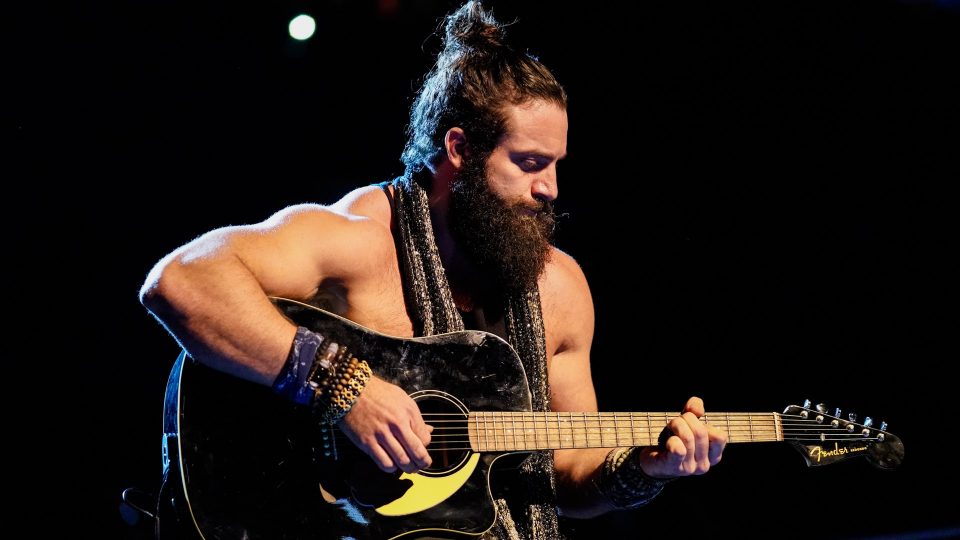 Jeffery Sciullo broke into independent wrestling way back in 2008. Then known as “Heavy Metal Jesus” Logan Schulo, he would hone his craft for the next six years before eventually making his way to NXT in 2014.

After a year of jobbing as an enhancement talent, 2015 finally saw the debut of the drifter character known as Elias Sampson.

Elias would wander around strumming his guitar while he spoke down to his opponents in a heelish fashion until eventually, the drifter would drift onto the main roster in 2017.

Dropping the Sampson from his name, Elias would continue to sing songs, berating whatever town he was in or whatever opponent he was facing, showcasing his talent of being able to come up with fresh material almost every show.

Elias was talented enough to have released his own album. Not only that, when the EP dropped in 2018 it hit the iTunes charts at number 14!

Despite being over with the crowd, Elias would step back from the limelight, and at the time of writing his whereabouts is currently unknown.

Luckily his fresh-faced brother Ezekiel has continued the family legacy. He may not have the same musical chops as his older sibling, but his appearance and ring style is eerily similar enough to continue in his place. 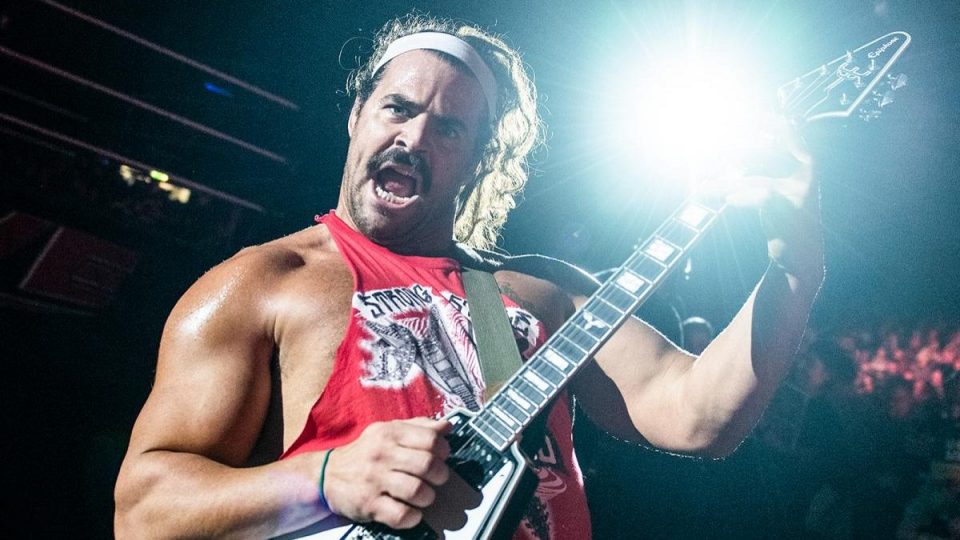 Rick Boogs has certainly made an impact during his short time on the main roster so far.

As well as being incredibly strong and looking like a walking, talking Hasbro figure, it turns out Boogs can shred.

Boogs would make his main roster debut in May of 2021, interrupting Baron Corbin during a promo and playing out Shinsuke Nakamura to the ring.

What’s crazy is that Boogs hadn’t practised the guitar for well over a decade beforehand.

His last, and biggest gig was playing in front of a crowd of 25 people back in high school. Other than sharing the odd Instagram post here and there, Boogs was given 12 hours to learn Nakamura’s entrance theme.

The two have been jamming their way to the ring in the style of Axl and Slash or Mercury and May ever since until Boogs, unfortunately, suffered an injury at WrestleMania 38.

Boogs is expected to be out of action for a few more months yet. Perhaps during this time he can practice his pinch harmonics and scales, and come back as a fully fledged rock god!