Wrestling and movie tie-ins should be a win-win for everyone involved, but sometimes, well, let’s be honest, most times, that just isn’t the case.

You think it would be simple. A film is released, so the film production company, usually one associated with whatever network is broadcasting the wrestling show, gets a shout out on live TV, and the wrestling promotion gets a guest star on their shows to excite fans and maybe entice new eyes to the product.

The theory is sound. The trick is the execution. A special guest is only as good as the material they are given. Sometimes there isn’t even a guest star to be had and the IP has to be crammed in some other way.

Take this past Survivor Series for example. What was advertised as a celebration for 25 years of The Rock was in reality a stealth promotion for the movie Red Notice, The Rock’s new picture for Netflix. WWE currently has a partnership with the streaming service, producing such titles as The Big Show Show and the interactive adventure Escape The Undertaker.

The Rock wasn’t even involved with the show. Not even with a simple video message he could have filmed sat on the toilet after one of his intense iron paradise sessions.

He didn’t even react to the proceedings on social media! Other than a retweet of a career retrospective a week before the event, the only thing The Rock posted during Survivor Series 2021 was a picture of the sandwich and brioche toast he was eating. To be fair, it did look delicious.

What we did get was Mr McMahon talking about how proud he was to be in charge of a $100,000,000 solid gold egg the was used in the movie after he Thanos snapped half his roster out of existence over the last year. 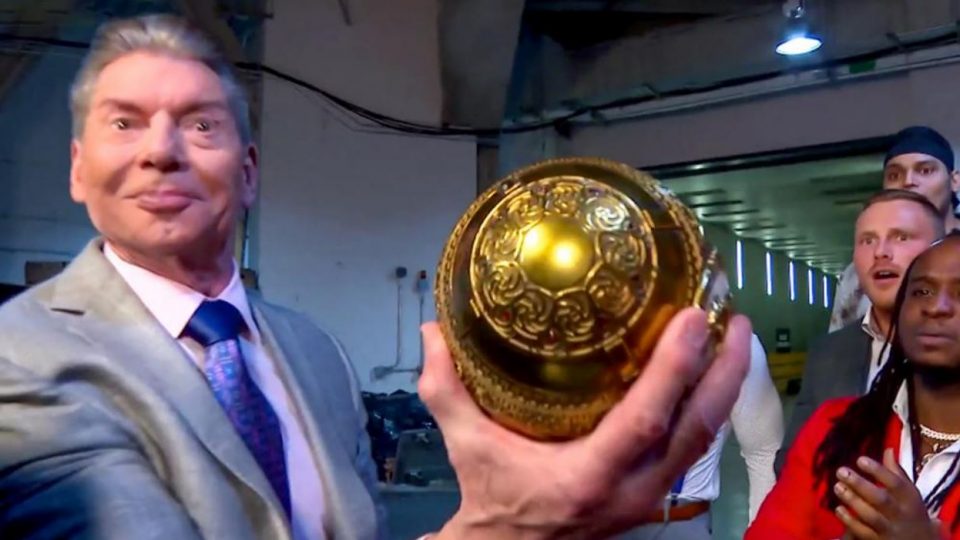 It truly makes the mind boggle. At least it would have if us wrestling fans weren’t already used this kind of malarky, so here are five awkward segments designed to promote a movie that fell flat on its face.

Army Of The Dead 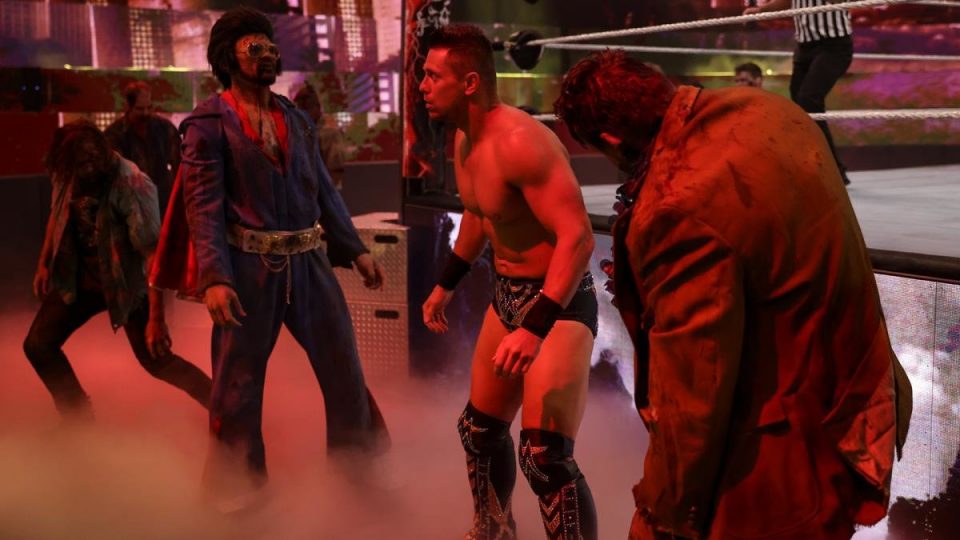 Released earlier in 2021, Army Of The Dead saw director Zack Snyder return to the zombie genre that started his feature career with 2004’s Dawn Of The Dead.

This latest picture had former WWE Superstar Batista as the lead, so a little promotion at WWE WrestleMania Backlash made sense.

What didn’t make sense was the execution. It started fair enough. An opening video package narrated by Batista toted what was in store at the PPV with clips from the film spliced in to echo Big Dave’s speech of “Taking aim” and “fighting for what’s yours.”

All that was needed was a promo from The Miz saying how he was the true Hollywood star, making sure to name drop the film title and release date somewhere in the promo. What we got was A ZOMBIE LUMBERJACK MATCH!

As this is still a recent memory we don’t need to go into great detail. The Miz faced Damien Priest in a lumberjack match, the lumberjacks were zombies with no kayfabe reason given and the commentary team selling them as the legit undead. Zombies took out a parkouring John Morrison, then after Priest took the victory, ATE THE MIZ!

Rather than ending the show and calling an actual priest, the national guard, or whatever it is you do when the end of days is upon us, the commentary team just carried on with the rest of the PPV.

I guess in a world of fiend possessed children’s TV presenters and undead funeral parlour wizards, a small legion of brain munchers is no biggie.

The spot was so horrendous Batista himself had to take to Twitter to tell fans to leave him alone, and that it wasn’t his idea.

Wtf you telling me?!! You think I booked a bunch of fucking zombies. I’m on a damn plane! Shouldn’t you be tweeting Vince?! 🤷🏻‍♂️ https://t.co/Eb8wNdijRI

The Planet Of The Apes 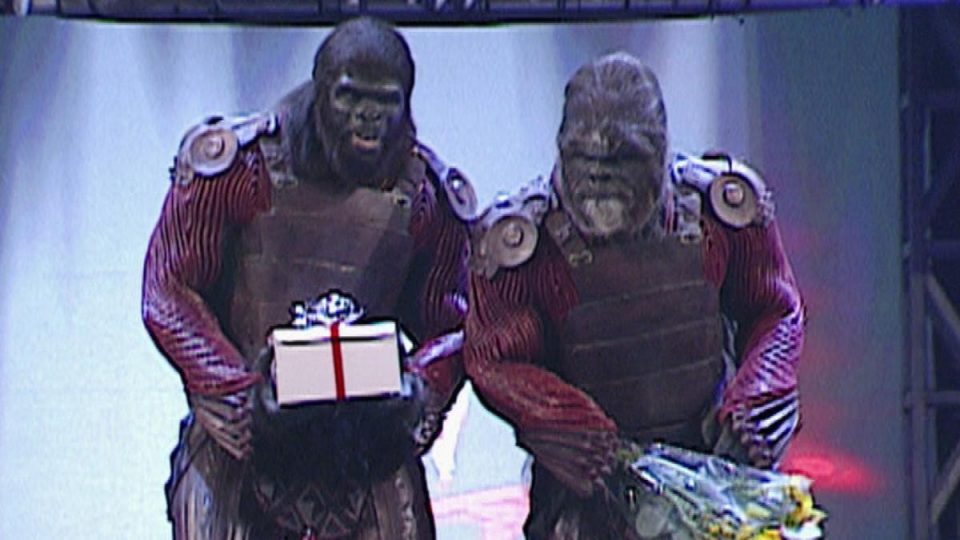 Between the iconic original film series and the well-received reboot trilogy, Tim Burton gave us his version of the monkey madhouse with his 2001 remake of The Planet Of The Apes.

The film wasn’t well-received by audiences or critics, and neither was the WWE tie-in segment.

On the August 6th edition of Monday Night Raw from 2001, Jericho was cutting one of his hilarious at the time, awkward with 2021 hindsight promos on Stephanie McMahon, which usually saw Y2J call her a whore and joke about her big boobs. It was a different time.

Anyway, the forced segway pretty much went as follows. Jericho said Steph has slept with everyone in both companies! Everyone on the planet! So now he had to find people from a new planet! The planet of the apes! With this smooth transition, two POTA gorilla soldiers came out with flowers and presents to Kamala’s old theme.

Anyway, the apes come down, Jericho calls Steph a whore again and throws a pie in her face. The end.

In 2012 The Three Stooges made a comeback to the silver screen. Not the actual Three Stooges, of course, that would be awful as they are dead. This was the Farrelly brothers reboot starring Chris Diamantopulos as Moe, Sean Hayes as Larry and Will Sasso as Curly.

Say what you want about the film, these three actors did a great job imitating the legendary comedy trio. In fact, their first segment on the 9th April 2012 episode of Raw wasn’t too bad at all.

In the pre-recorded skit, Santino found the Stooges in a giant crate. Larry, Curly and Moe slapped each other about for a bit, Santino teaches them how to do the cobra with added stooges sound effects, then Moe adapts the move to incorporate an eye gouge, thus creating “the Moebra.” A true ring technician for modern times.

But when Santino asks what the plan is for the live crowd, Larry informs him they didn’t really have one. Little did we know that would be a shoot.

Speaking of working into a shoot, brother, the time came for the stooges (Larry, Curly and Moe, not Gerald Briscoe and Pat Patterson) to make their way to the ring. Well, Larry and Moe any way. Where’s Curly?

Real American hits! The crowd goes wild! Then Curly comes out dressed as Hogan, and the crowd goes mild! WWE used to do the same gimmick For Briscoe and Patterson during the attitude era, except back then the heat was intentional.

Sasso did an amazing job impersonating the Hulkster, but that wasn’t enough to save the segment from bombing. Close-ups of the crowds bored, disappointed faces didn’t help either. Curly plugged the film, then promo came to a close with Kane chokeslamming the immortal imposter in the centre of the ring, which Sasso took better than the real Hogan. 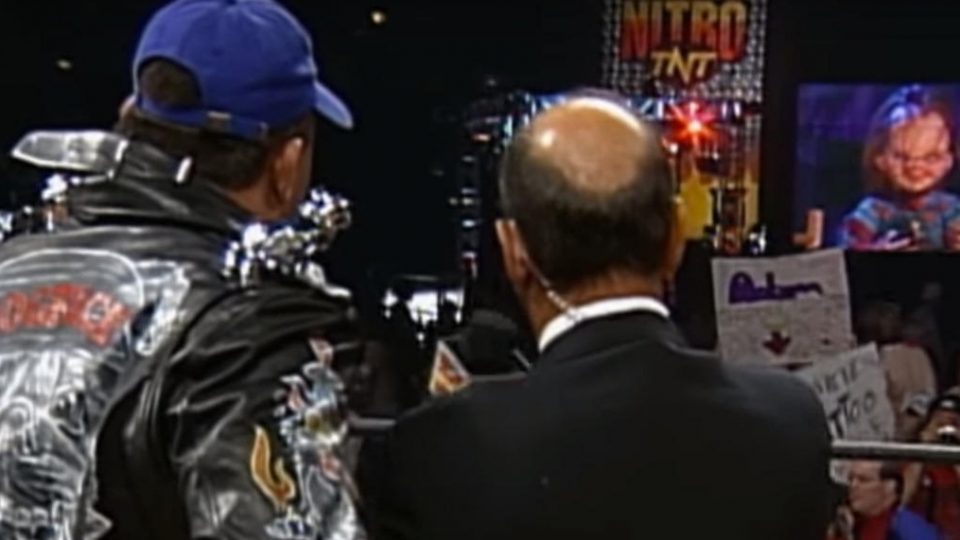 On the 12th of October 1998, Monday Nitro, Mean Gene Oakland stood in the ring with a mic in hand and introduced the dog-faced gremlin Rick Steiner for an interview.

At the time Rick was in a feud with his brother Scott. Gene asked if Rick had pushed too hard for this match, and as Rick gave his answer he was interrupted by a cackling laugh. Who was that? Why, it was the antagonist from the Child’s Play franchise obviously, Chucky!

Chucky appeared on the stage screen and Gene asked “Who’s that dummy?”

Thanks to Chucky being pre-recorded, he continued laughing for a few beats too long before finally replying “Who you calling dummy?” completely killing kayfabe. Well, a blood feud between the Steiners being interrupted by a fictional killer doll may have done that first but it was awkward non the less.

The badly timed back and forth continued between the three. Eventually, Chucky plugged his upcoming film and said that he was going to direct an Oscar-winning feature starring Big Poppa Pump himself. Another cackle and the segment just kind of fizzled out.

That was it for Chucky. He didn’t appear again for another 13 years, making an appearance at NXT Halloween Havoc special this year to promote Chucky, a film set after 2017’s Cult Of Chucky ignoring the 2019 reboot of Child’s Play. Chucky’s timeline is almost as befuddling as 1998 WCW. Almost.

Halloween Havoc also featured Rick’s son Bron Breakker, and Chucky referred to his previous appearance by asking if being a loser runs in the family. Long term booking was executed to perfection right there. 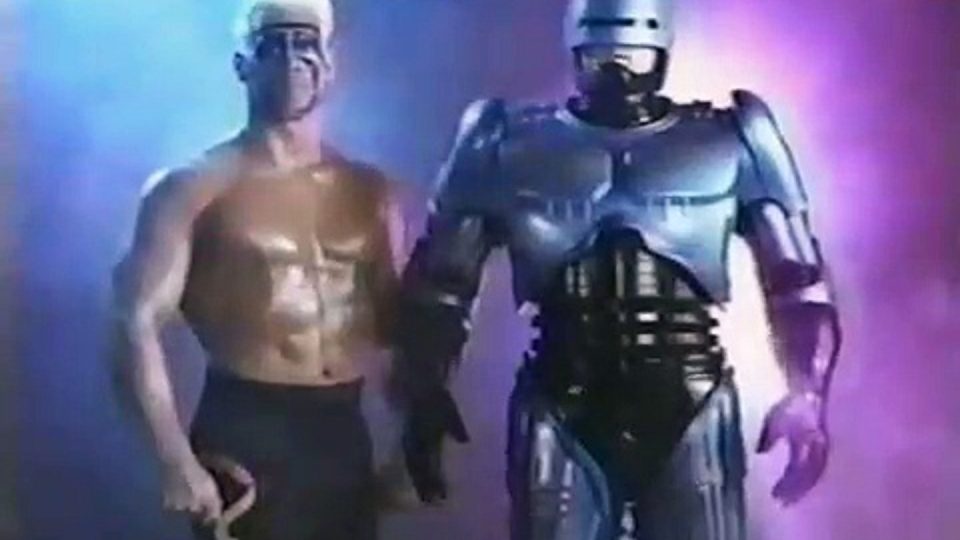 The adventures of Sting and Robocop have been chronicled many times across the internet. You can read about Sting’s memories of the event here.

Still, it wouldn’t be a list celebrating awful movie tie-ins if we didn’t mention it, so let’s break down the action and see how truly ridiculous the situation was.

It took place at Capitol Combat in 1990, the same year Robocop II was released.

The Four Horseman locked Sting up in a cage at ringside that was placed there earlier to keep Jim Cornette interfering in a previous match.

Who knows what their endgame was here. To cause a minor inconvenience and hold up the show? To have Sting pay witness to the rest of the card awkwardly from the ramp? Or maybe it was to prevent him from introducing the world to El Gigante, which he would do later on in the night.

Anyway, they lock Sting up but here comes Robocop! Despite what IMDB says, Officer Murphy was NOT played by Peter Weller here. So for all intense and purposes, this was the real Robocop!

Detroit’s finest slowly waddles his way down the ring, almost tripping up on the ramp the process.

He arrives at the cage door, opens it, then embarrassingly closes it again as he was supposed to bend the bars first before ripping the door from its hinges.

Sting is freed! The two then walk over to the horsemen, who run off into the crowd. What would happen if they didn’t? Well according to the movies if they didn’t comply in five seconds RC would have shot one of them in the never regions so it was probably for the best that they got out of dodge when they did.

Sting and Robocop stand triumphant! Unfortunately, we would never see Robocop in WCW again. It’s a shame, as I’m sure he would have formed a faction with Stinger only to turn on him at the next PPV, as is tradition for the bleach blonde ones early ’90s run.