Hey yo! No this, isn’t a listicle on Scott Hall, but rather the original Hey Yo-er, Rocky Balboa himself, Sylvester Stallone.

As WrestleMania approaches speculation begins on who will join The Undertaker in the class of 2022 Hall Of Fame, and which celebrity we are all going to give out about for being undeservedly inducted.

One glaring omission from the non-wrestler wing has to be Sylvester Stallone. Whilst Sly inducted Hulk Hogan into the hall back in 2005, The Italian Stallion has yet to be given his own spot.

Stallone may have not taken part in any major angles, or even got his hands dirty in the ring with a guest punch spot, but he has showcased pro-wrestling in his movies with affection rather than the usual snobbery.

On top of that, Stallone respects wrestlers, as Ted DiBiase recalls in this interview for the 350 Days documentary.

Sly co-starring with wrestlers is a tradition that continues to this day. Most recently he voiced King Shark in the James Gunn (no relation to The Ass Boys) production The Suicide Squad alongside John Cena.

He also played space ravager Stakar Ogord in another James Gunn movie, Guardians Of The Galaxy Vol 2, with another WWE Superstar. However, in those two films, the wrestlers had higher billing than Sylvester.

And if you’re wondering why we didn’t name the GOTGV2 actor it’s because he is the first entry on this list, albeit for another movie! 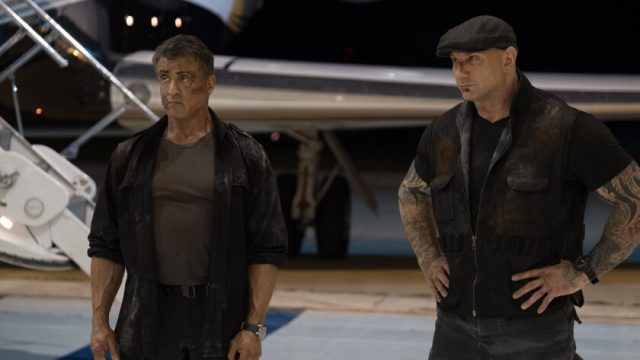 The Escape Plan was a 2013 movie that holds the honour of being the first film to feature long time action movie rivals Stallone and Schwarzenegger as co-leads.

The movie sees Stallone play Ray Breslin, a man who tests prison security by escaping from them.

Like a dumb, young blonde Sting thinking he can trust Ric Flair, Breslin is double-crossed and locked in a super-duper prison known as The Tomb, where he meets fellow inmate Rottmayer (Arnold) and the two have to devise some sort of plan…an Escape Plan!

The movie did modestly well earning mixed reviews and making a profit on its low budget.

But the real escape plan was devised by Arnie, who wouldn’t appear in the sequel.

Filling his shows would be none other than Dave Bautista, AKA Batista, who at the time was currently making a name for himself in Hollywood with films such as Guardians Of The Galaxy, Spectre and Blade Runner 2049.

Sadly, Escape Plan 2 was released straight to DVD with most audiences thinking it was awful, a sentiment Stallone agrees with, calling it, “The most horribly produced film I have ever been in” whilst doing social media press for Escape Plan 3.

Still, the third film did marginally better than the second, earning itself a 4.4/10 on IMDB over the previous instalments score of 3.9/10. Fingers crossed for Escape Plan 4!

From one prison to another, this time a cryo one. Demolition Man was sadly not the biopic for Ax and Smash, but rather a movie set in the far future of 1996.

When Simon escapes 50 years later, a hippy-fied future that doesn’t believe in violence needs to turn to one man who isn’t afraid to punch another in the face, Spartan!

Demolition Man wasn’t critically praised upon release, but over the years has gained a cult following thanks to a generation of fans that grew up with this high concept piece of pure fun.

One member of Simon’s evil thug gang was played by none other than wrestler turned actor turned future Governor of Minnesota Jesse Ventura.

Sadly a lot of Ventura’s scenes got cut, including all his dialogue. One particular sequence that didn’t make it to the final feature, or any subsequent Blu-ray or DVD releases, was a big climactic fight scene between himself and Stallone.

However, Ventura does get the opportunity to shoot one of the films biggest d****heads Dr Cocteu, so at least he has that going for him.

At the time of filming Jesse was doing commentary for WCW and granted a young whippersnapper named Eric Bischoff a big favour by landing him an interview with himself and Stallone.

Stallone seems to be enjoying re-cutting and reworking his old films at the moment, as evident with the Rocky 4 Director’s Cut, so who knows, maybe we will still get an edit of Demolition Man with more Ventura. 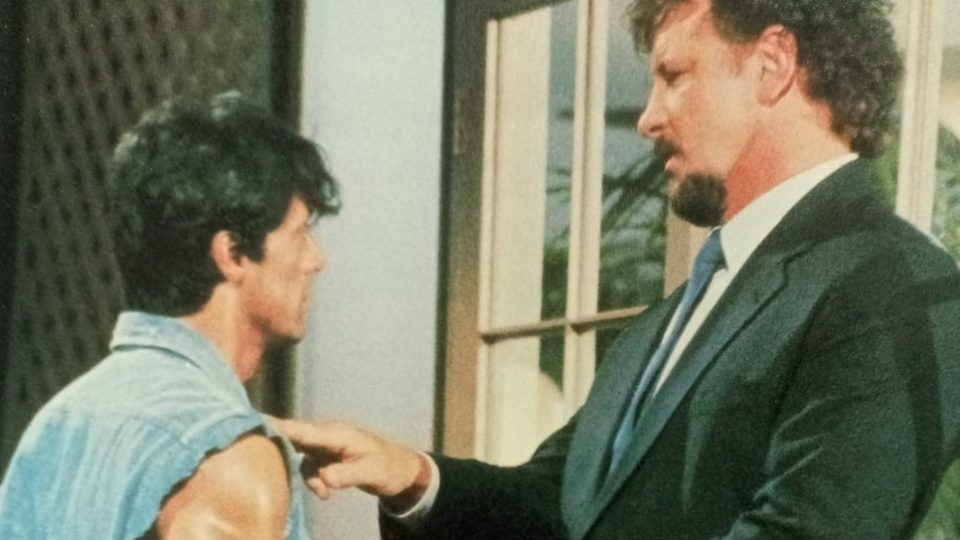 One of the brothers, Cosmo (Stallone) convinces his brother Victor to become a wrestler, and DiBiase probably makes his appearance during one of the movie’s many montages (it’s a Sly film after all) but doesn’t do anything noteworthy enough to make this list.

The Funkster, however, has a significantly bigger role. As well as helping train the movie’s cast, including real-life boxer Lee Canalito as Victor Carboni, Funk also portrays big baddie heel, Frankie The Thumper.

Here is an interview with young Stallone, Canalito, and Funk.

Almost ten years and three Rocky films later, Funk once again appeared in a Stallone movie, Over The Top, which is pretty much Rocky with arm wrestling.

Funk’s role may have been smaller in this film, but he makes a bigger impact. Literally.

Playing one of the baddies henchmen, Funk tries to stop Sly from leaving during Mr Cutler’s villainous speech, only to be punched in the guts sent flying through French windows for his efforts. Sadly, he does not land on an exploding barb wire panel. 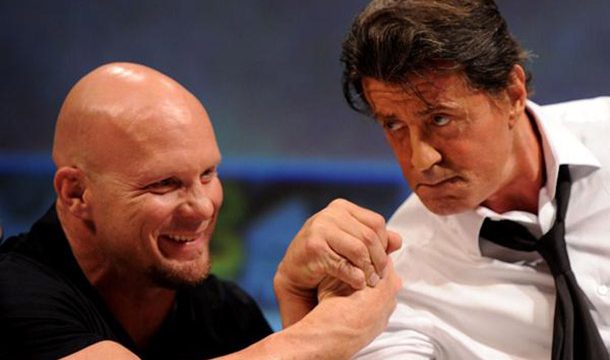 When The Expendables hit the screens back in 2010, it saw Sly team up with other action legends like Jet Li and Jason Statham to save the world as we know it.

With a hero group full of badasses, you need some badass baddies for them to fight to achieve full badassery, and you don’t get more badass than the Texas Rattlesnake, Stone Cold Steve Austin.

Austin plays a henchman (notice a pattern here?) named Paine, and unlike Ventura, his end ruckus with Stallone made it into the finished film.

This is a good thing, seeing as Sly paid a high price filming his scrap with Austin, as he told The Guardian.

“My fight with Stone Cold Steve Austin was so vicious that I ended up getting a hairline fracture in my neck. I’m not joking. I haven’t told anyone this, but I had to have a very serious operation afterwards. I now have a metal plate in my neck.”

Austin revealed to The Independent that he didn’t know about the injury until a few months later, and felt horrible about the situation.

“I don’t know if he drinks beer – the guy’s a fitness fanatic – but I’ll sure buy him a beer if he wants one!” 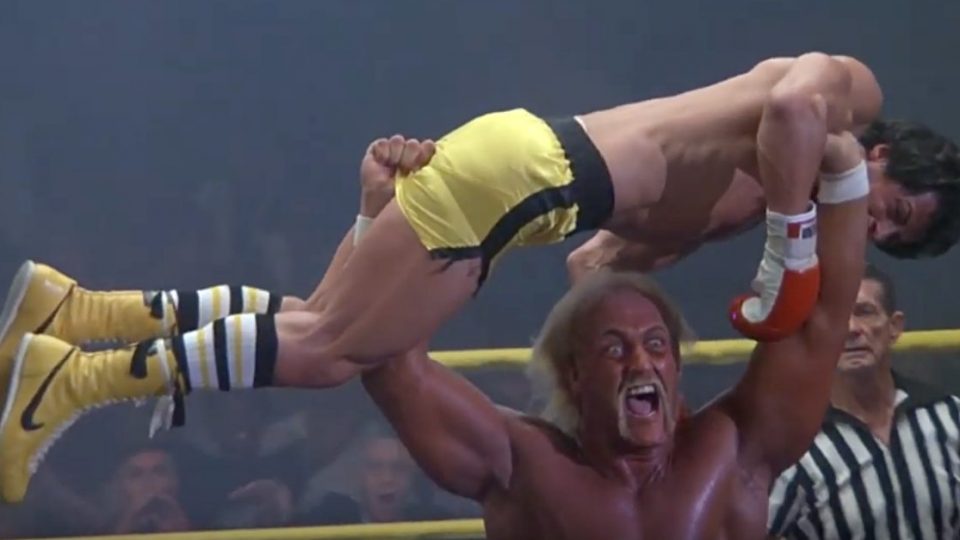 Rocky was a drama film that set the standard for all future sports movies. Rocky II was pretty much a re-tread of the original with a lighter tone and a super happy ending, but when Rocky III came out it had an added ingredient that would rock the world.

Not only did Rocky III grant us the ultimate training anthem with Survivors “Eye Of The Tiger,” it also introduced the decade to two of its biggest stars, and the headliners for the first-ever WrestleMania, Mr T and Hulk Hogan. 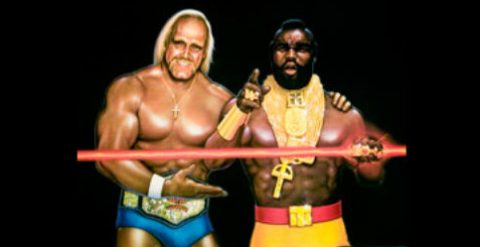 Hogan played Thunderlips (in the flesh, bay bay), a professional wrestler who Balboa fights in a charity match.

Rather than lying on his back and kicking upwards like a drunken frog ala Antonio Inoki in his fight against Muhammad Ali, Thunderlips makes sure he puts on a show for the crowd.

“The Ultimate Male” pleases his “Love Slaves” by yeeting Balboa all around, and outside of the ring, until the Italian Stallion cuts off his gloves for the comeback. The match ends in a no-contest and the two befriend each other, with Thunderlips posing for a photo with the Balboas. 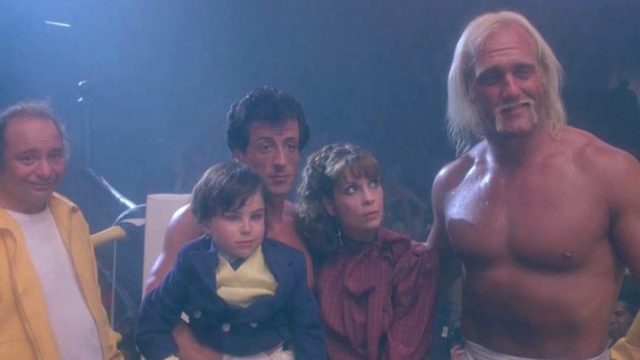 Despite Vince McMahon Sr being against Hogan filming a movie, it paid off for the best.

When the film was released Hogan became a star, ushering the dawn of sports entertainment, and under the guidance of new owner Vince Jr, helped make the WWF into the brand we all know and love.

So basically modern wrestling, as well as modern sports dramas, owe Sylvester Stallone everything. For that reason alone, the man should be inducted into The Hall Of Fame.

Or at least be sent a six-pack of Broken Skull IPAs.