Saraya is just the latest former WWE Superstar to make the jump to AEW, but her arrival in the promotion could cause a monumental shift in the women’s division. After all, Saraya brings with her legacy, fame, and above all, star power.

As Paige, she was a hugely influential presence during her time in WWE. Her unique look, attitude and wrestling style, broke the “diva” mould. Her groundbreaking match with Emma ushered in a new era for women’s wrestling in the United States and her 308-day run as the inaugural NXT Women’s Champion solidified her as the face of that era.

She continued that trend on the main roster winning the Divas Championship on her Monday Night Raw debut from AJ Lee. While not part of the Four Horsewomen, Paige was an integral part of the ‘Women’s Revolution,’ paving the way for the likes of Becky Lynch, Sasha Banks, Charlotte Flair and Bayley.

Unfortunately, her career was plagued by neck problems, which ended her in-ring career long before it was ready to be over. She returned to television as SmackDown Live General Manager and then manager of the Kabuki Warriors before seeing out the remainder of her contact away from television.

Now an All Elite Wrestling employee, Saraya has the potential to be a real game changer in the women’s division. Saraya is a valuable asset for the promotion in a number of ways, with a wide array of skills that can be applied across a variety of roles.

Let’s start with the most obvious. As an active wrestler, Saraya has an interesting list of first-time opponents waiting in line for a shot at the former WWE star. The top name being Britt Baker, with whom she could have an excellent feud.

Saraya’s debut came at the expense of the Britt Baker and Jamie Hayter reunion. The two teammates had been at odds after the Interim Women’s Championship match at All Out but rekindled their friendship to get one over on their common enemy Toni Storm.

The attack on Storm was halted by the surprise appearance of the former WWE Divas Champion. The heels scattered upon Saraya entering the ring and a post-match promo from Baker certainly leans toward a feud between the two.

“ I’m good, and most importantly, we’re good. We’ve been through the good, the bad, and the ugly together and we came out on top. You know what? I originally brought Jamie [Hayter] to AEW to protect me, but now, Jamie is my best friend. I need her just as much as she needs me. We’re a team! We’re a unit, and this is our house, Saraya. So, I don’t know where you came from or where you think you’re going from here, but you might as well turn around right now because there is not room for you here in AEW.”

A heated rivalry with Baker is definitely the biggest programme available for the AEW newcomer, and the physical and verbal battles that could take between the two would take centre stage on Dynamite and Full Gear. 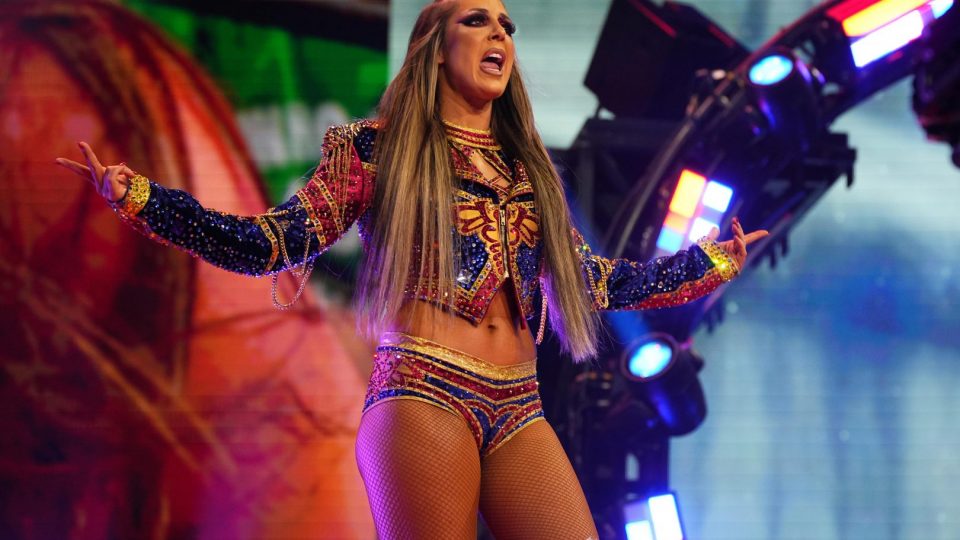 There are several other stars Saraya could face in multiple first-time encounters. Starting with Baker’s partner Jamie Hayter could be a very good opponent for the former Paige. Hayter is one of AEW’s untapped talents and despite looking like a star, she is yet to fully reach her potential. A feud with someone the calibre of Saraya could easily fix that.

The same could be said for other wrestlers on the women’s roster. Ruby Soho and Athena all made impactful debuts that promised to elevate the women’s division, but for one reason or another have failed to do so, which again is something interaction with Saraya could remedy.

Then there are the champions. Current Interim Women’s Champion Toni Storm despite winning the title and receiving audience support has something missing. Her title reign hasn’t quite landed the way it should’ve and the division remains without a true star other than Baker. For Storm to have a programme with Saraya and the legacy that accompanies her, would go a long way in establishing the New Zealander. 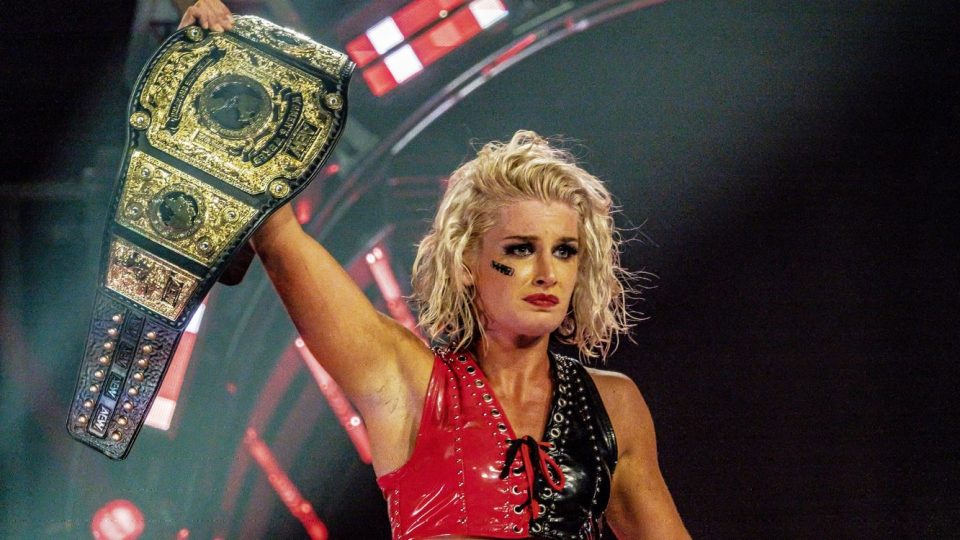 AEW Women’s Champion Thunder Rosa is currently on the injured list but upon her return will almost certainly have a gripe or two against someone taking the spotlight. Due to poor booking and positioning, Rosa’s championship run has so far failed to muster the same impact as her quest for gold garnered. Therefore a champion mounting a comeback in a quest for dominance and status could help with Rosa’s rehabilitation as one of AEW’s top stars.

Another champ who could greatly benefit from Saraya’s addition to the roster is Jade Cargill. Cargill is one of the most impressive wrestlers around. Her strength, power, and charisma have made her one of the major players in AEW. As the undefeated TBS Champion Cargill has proven herself to be unbeatable albeit in quick squash matches made to make her look like an unstoppable force.

Saraya has never faced anyone with the size and power of Cargill so it would provide a new challenge for the tenacious Brit, and one she would relish. As a wrestler who is still very green a run with Saraya, both backstage and in the ring would be advantageous for the young champion.

The sticking point concerning a clash with Cargill, would be who would win? Defeating Paige early on in her run would seem to make little sense, while AEW appear hesitant to end the TBS Champion’s undefeated streak. 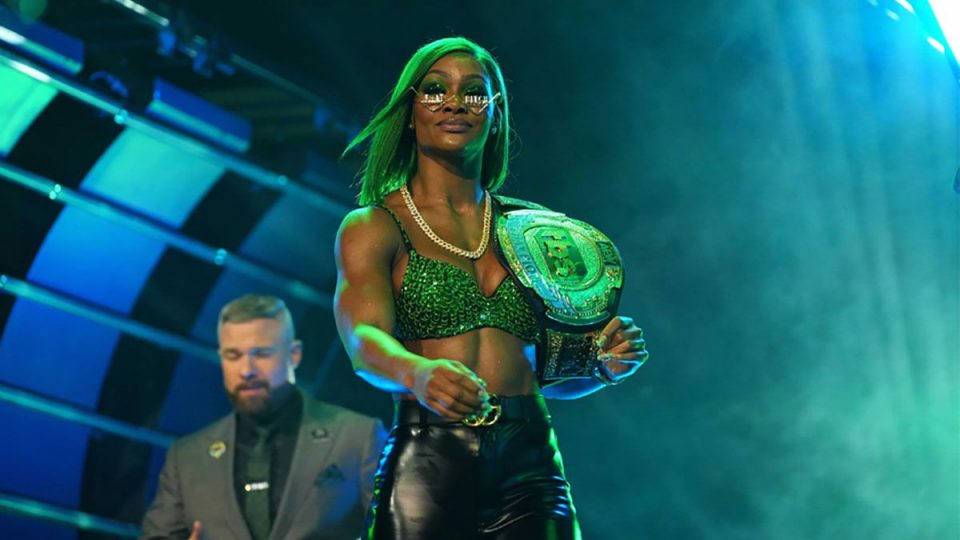 With all of that being said, Saraya’s AEW in-ring debut is not certain. In WWE, her wrestling career was cut short because of injuries. However, the comebacks of WWE legends Edge and Bryan Danielson gave her hope that she too, could get back inside the ropes. In fact, after announcing her WWE departure, the British star expressed her desire to wrestle again.

Now that Saraya has joined AEW she could get to realise her dream and return to the ring. However, writing in the Wrestling Observer Newsletter, Dave Meltzer noted that the AEW newcomer still hadn’t been cleared to return.

“WWE kept her under contract until her deal expired on 7/7, and AEW had talked with her shortly after that. Tony Khan had promised a surprise or two in the days leading to the show. He had kept her name very quiet.

There is no answer to the question as to what role she will play, if she will wrestle regularly, sparingly, or not at all…

If she is going to wrestle, and can go at her prior level, she will be a good addition. But it was notable in her run-in she didn’t touch anyone, and with WWE, not only was she not allowed to wrestle, but nobody was allowed to touch her. We were told that she had not been cleared as of very recently, which would explain not touching anyone, but would like to be cleared.”

Even if Saraya is cleared for action and does indeed return to the ring, there is still the fact that she hasn’t wrestled in five years. Would she even be able to return to her pre-retirement best?

So let’s have a look at some other roles for her in AEW.

During her time in WWE and after the forced retirement, Paige became the manager of Asuka and Kairi Sane, The Kabuki Warriors. As a mouthpiece for the Japanese duo, Paige introduced the new team to the newly formed Women’s Tag Team division and soon to the titles. It was a short but effective stint as a manager and one that would benefit several stars on the AEW roster.

Saraya’s talking ability, attitude and charisma make her perfect managerial material for those on the AEW women’s roster that are struggling to make the desired impact. Stars like Athena, Ruby Soho and even Toni Storm could all do with the on-screen presence and backstage tutelage of Saraya. It is these abilities that would also help stars beyond the top tier of women on the roster. 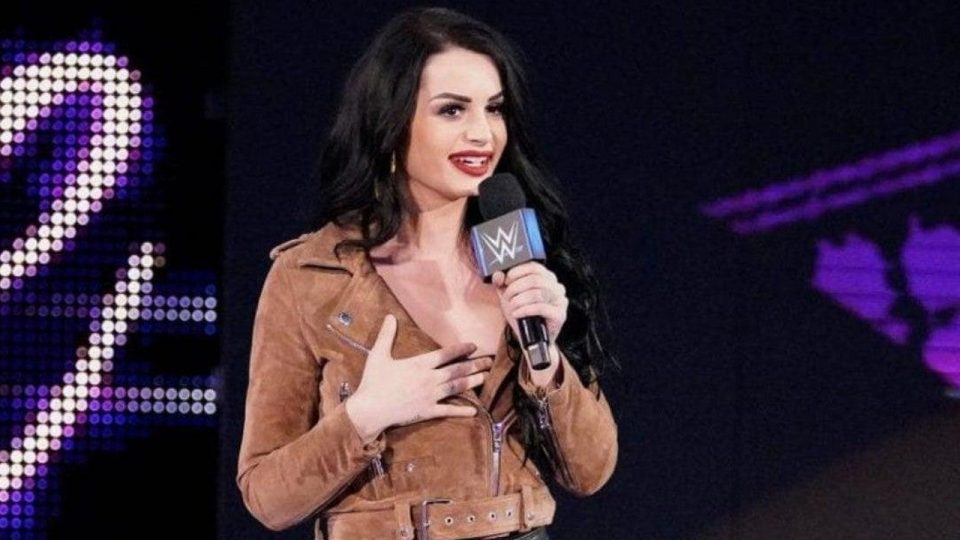 Someone like Hikaru Shida, for example, would surely stand to gain by being in a managerial partnership with Saraya. Simply put, a managerial role would keep Saraya and anyone affiliated with her relevant on AEW programming and therefore help elevate the entire roster.

3. Leader of a faction

When Paige returned to WWE after a year-long hiatus due to her neck injury, she did so as the leader of a faction that would come to be known as Absolution. The former Diva Champion was backed up by Mandy Rose and Sonya Deville made their presence and threat felt by attacking top members of the women’s roster. It was a great role for Paige as it allowed her to thrive in a prominent role while letting her crew do the heavy lifting. 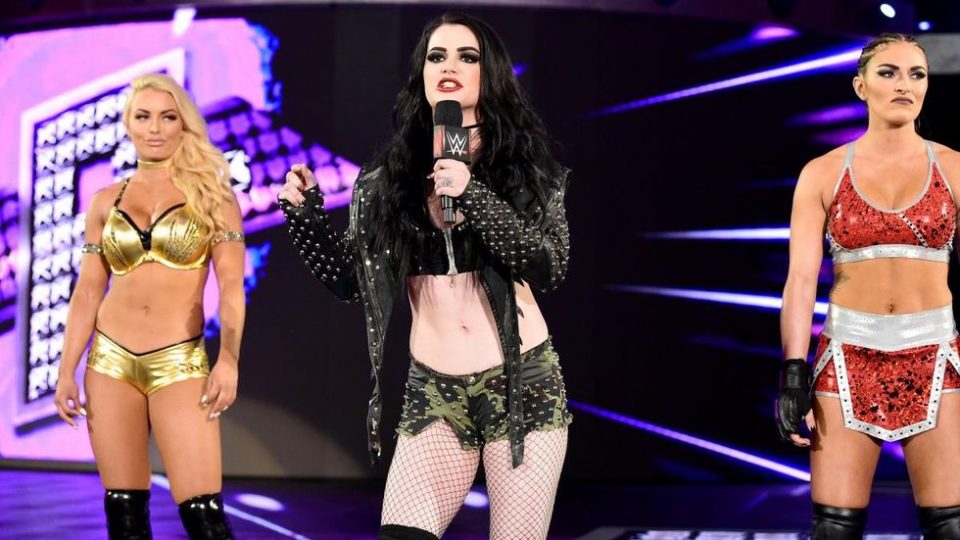 AEW has an abundance of factions. The Elite, Blackpool Combat Club, and the Jericho Appreciation Society are all top groups but active within the male roster. The only faction on the women’s side was the disastrous Nightmare Collective starring Brandi Rhodes and Awesome Kong back in 2018. Since then the only modicum of a faction is Baker’s partnership with Jamie Hayter.

Baker, Hayter and Rebel are a thorn in the side of the women’s division. Saraya will undoubtedly clash with Baker and Hayter at some point, quite possibly as her first programme. The former WWE Superstar bringing some backup in the form of those victimised by ‘Team Baker’ would be a great way of boosting and elevating all of those involved in the faction.

4. GM of the Women’s Division

The women’s division has come in for near-constant criticism since AEW’s creation. The first female wrestler signed by the was Britt Baker who ultimately became and remains its biggest star. While Baker has undoubtedly been a success, no one else is yet to reach the same heights.

AEW have tried to make more stars, but none have made a lasting impact. Riho was their first women’s champion, in an experiment that didn’t work. Nyla Rose was next and brought some fear and threat to the title but was dethroned by Hikaru Shida who has featured intermittently since she lost the title to Britt Baker despite possessing the promotion’s longest title reign.

Baker’s title run was easily the best and most effective in the division’s albeit short history which should not be the case. The title is in desperate need of elevation, prestige and meaning. The same can even be said for the division as a whole. Despite different champions, and new stars coming in the division clearly needs focus and purpose, and Saraya is the perfect tonic for that. 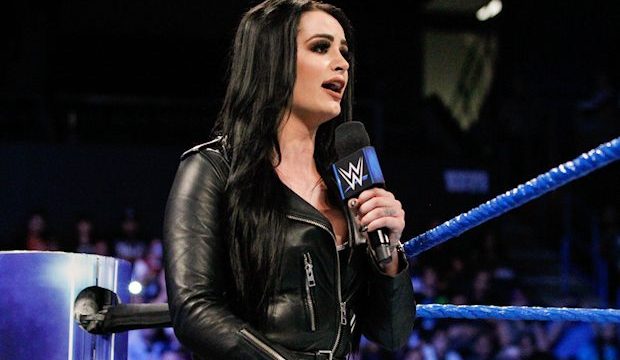 The night after WrestleMania 34, Paige officially retired from in-ring competition before stepping into the General Manager role the next night on SmackDown Live. Paige immediately grew into the role and brought passion and a strong sense authority. Her take-no-sh*t attitude put people in their place and kept control of a turbulent time for the brand.

Saraya’s style and personality exude everything needed to take AEW’s women’s division and turn it into the division it was promised and has the necessary tools to be.

In a similar vein to the General Manager role of the women’s division, Sayara could deliver and command the same respect across the entire AEW roster. 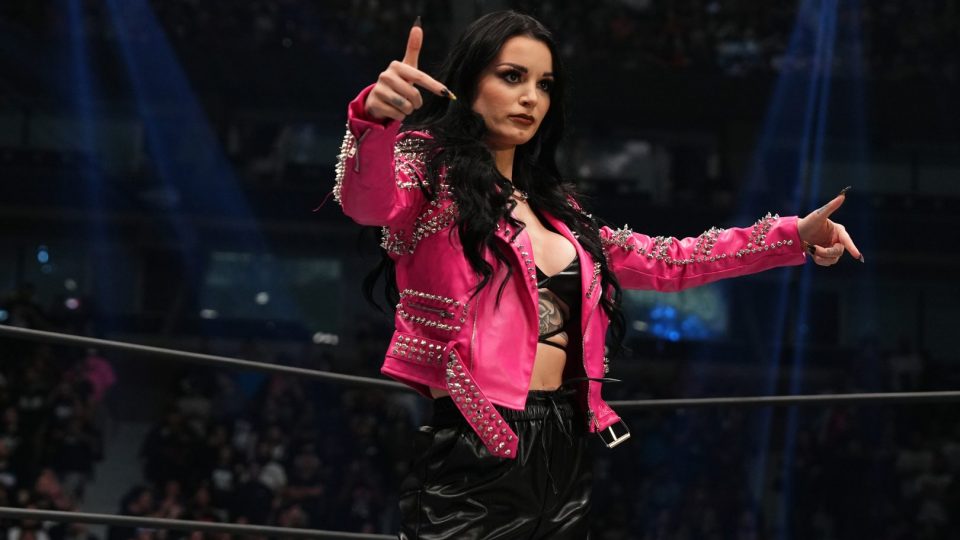 The promotion is yet to utilise such a role and despite being a tried and tested WWE trope, there is room for an on-air authority in AEW. The company is coming through one of the most controversial periods in its history and needs a controlling and powerful voice to lead and steady the ship.

As we saw in WWE Saraya is more than capable of running the show, keeping egos in check and most importantly not allowing the lunatics to run the asylum.

Whichever role Saraya ends up playing in AEW she will bring eyes to the product and especially give the women’s division some emphasis, which will undoubtedly improve the promotion as a whole.