A look back at moments from Undertaker’s 30-year career that genuinely freaked us out a bit.

The Undertaker is quite obviously one of the greatest gimmicks of all time. Of course, over the years that gimmick evolved. Dead mortician, demon warrior, cult leader, badass biker, but throughout his many guises one thing remained constant.

The Deadman sure was one spooky b*stard. But was he really that scary?

For the vast majority of his time in the ring, Undertaker was a babyface, meaning the fans cheered him on as he went about his freaky business. We wanted to watch him use his dark façade to strike horror and scare the bejesus other wrestlers rather than us, the viewing audience.

Undertaker was less of a horror icon and more of a dark, brooding hero. Like Batman. Or Spawn. Or Bananaman.

Well, that’s not quite true. Taker did have some heel runs, and during those times he used his evil ways to give us the willies.

Heck, even as a face he could be quite disturbing at times. So let’s put on our brave faces, turn off the lights, pump up The Ministry theme on your music player of choice (Taker’s best theme, and you know it) and take a look at five times Mean Mark Calaway made us shudder in our seats.

Hulk Hogan On The Funeral Parlour 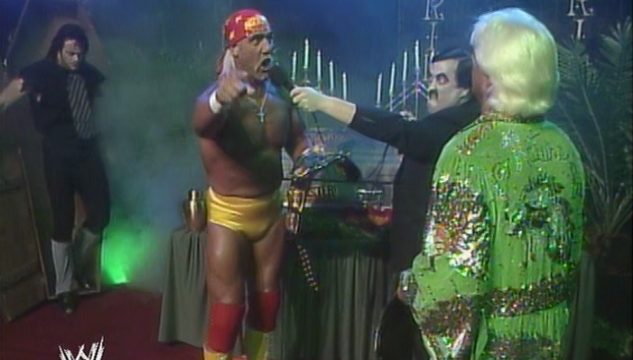 “It’s behind you!” The protagonist in the foreground being unaware of the antagonist in the background is a horror technique as old as pantomime itself.

From the first zombie sighting in the original Night Of The Living Dead to more recent scary films such as IT, there’s something quite disturbing about our hero being unaware of what evils lurk from behind.

Hulk Hogan was a guest on the 11th of November 1991 edition of Paul Bearer’s funeral parlour. This was in the build to Hogan and Taker’s Survivor Series match when The Nature Boy himself, Ric Flair, interrupted the proceedings.

The two legends stood face to face as Ric cut a legendary promo about Hogan feeling butterflies in his stomach.

What Hogan didn’t know was that behind him, one of the many coffin doors that made up the funeral parlour set opened and out creeped The Deadman.

Taker would beat down Hogan, forcing Randy Savage and Roddy Piper to get up from the commentary booth and make the save. Except they didn’t.

The Macho Man hit Taker with the steel chair his posterior had just been resting on, and Taker didn’t even flinch. The only thing that saved Hogan was his crucifix around his neck, which Taker ripped off, examined, and then dropped in confusion, before walking back into the shadows.

Now you have to remember that WWF was aimed primarily at kids during this time, and seeing our heroes so helpless at this ungodly force was genuinely quite scary for little Hulkamaniacs.

On top of that, Undertaker would even beat Hogan and claim the title! For a couple of days at least, until the Hulkster grabbed it back because early ’90s Hogan, brother.

Taker’s debut might have been his first major “moment,” but this is the one that set him on course to legendary status.

Undertaker was set to face Shawn Michaels in the inaugural Hell In A Cell match, and some say it set a bar that has yet to be surpassed.

Sure, Mankind’s match may have been more of a spectacle, but in terms of unadulterated storytelling, this one remains the finest.

Undertaker was the face and Michaels was the heel. Shawn would get the upper hand every now and again, but the majority of the match would see The Phenom stalk Shawn Michaels around the structure, striking at a methodical pace like a horror movie serial killer icon, akin to Michael Myers or Jason Voorhees.

Even though Taker was a “hero” it got to the point where you started to feel sorry for Shawn. This was the first Hell In A Cell, and one of the first matches to reach such brutality, and Shawn was on the receiving end of it.

Another first was Shawn Clambering up the cell wall, desperate to escape.

But Taker followed, and at the top, the two created some frighteningly thrilling and distressing imagery, such as Shawn’s crimson face looking down through the cell roof as drops of blood land on the camera below.

One of the genius things about this booking was portraying Undertaker as an undefeatable menace who manhandled Shawn for the majority, so at the end when a debuting Kane manhandled Taker, there couldn’t have been a more perfect setup for Undertaker’s brother being the ultimate monster heel. 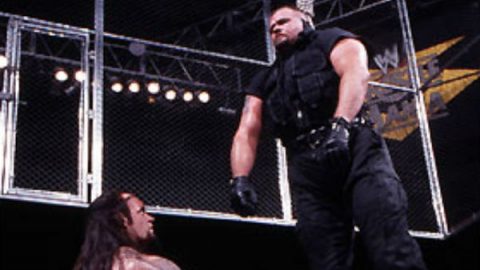 Wrestlemania. The biggest event in the pro wrestling calendar. Like the Super Bowl or the World Cup, even casual fans gather around the TV with their families once a year to cheer on the good guys, boo the bad guys, and witness a man being strangled to death by affixation on live TV. “Oh beautiful, for heroes prove”…

The Undertakers Wrestlemania streak features some of Phenom’s best matches and some of his worst. That one falls in the latter bracket.

After the dullest Hell In A Cell match in history, Undertaker picked up the win against The Big Boss Man with the tombstone. The cell was barely used in the bout, leaving fans to question what the point of the structure was.

Oh, there was a point alright. The Brood, consisting of Edge, Christian and Gangrel dropped down to the cell roof to lower a noose (don’t know why it took three of them to do it) and Taker then wrapped said noose around Boss Man’s neck.

Paul Bearer, with the control box in his hand, raised the cell. Although it may be seen as some hokey stupidity in hindsight, seeing Boss Man slowly be lifted by his neck whilst fighting for his life, before eventually going limp and twitching, scarred the mind of many a young adult that night.

Throughout this madness, Michael Cole screams “Is it symbolic!? Is it symbolic!?” No, Michael, it’s a straight-up murder. Call the police, as all those involved need to be arrested and judged by a jury of their peers. 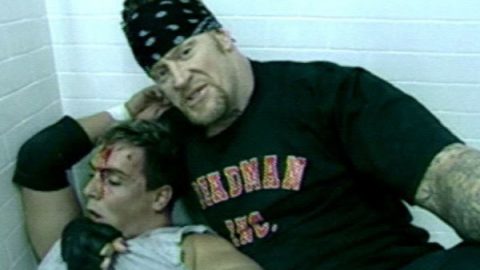 The only moment on this list where Taker wasn’t in full goth mode, but instead in his heelish “Big Evil” biker persona.

After Ric Flair cost Taker his match with The Rock at No Way Out, The not-so-Dead Man tried to goad Ric into a match at Wrestlemania 18, by attacking his friends and family.

Undertaker assaulted Flair’s buddy Arn Anderson, then the next week set his sights on The Nature Boy’s boy, David.

While David was training in the ring at a WWE facility, Taker stormed the room and commenced a beat down on the younger Flair.

Taker kicked his ass to the locker room. What made this scary was the fact there were no spooky gimmicks or ghostly malarkey. Just Undertaker beating up a smaller man in a locker room, like a school bully.

It also went on for quite a while, and the fact Undertaker was stood in the ring, presenting the footage as a pre-recorded piece, you knew there was no hope of rescue.

The segment ended with Taker, sitting in the shower with a bloody David Flair under his arm, once again challenging his father to match at mania. What a big evil b*stard. 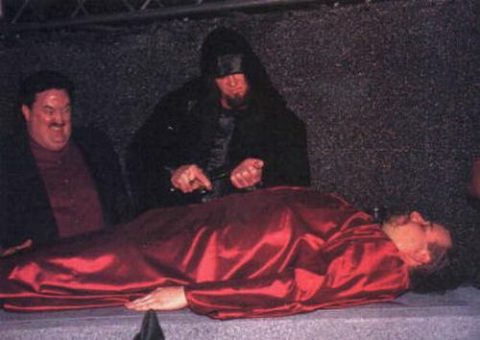 The last entry to this list is barely replayed on WWE television, if at all because let’s face it, it’s a bit much.

In November of 98, Undertaker was in full cult wizard Ministry Of Darkness mode. It’s all looked back as silly Halloween-y fun nowadays, but try telling that to the kids in the crowd paying witness to this satanic ritual.

Placing Dennis Knight on an alter located by the entrance ramp, The Undertaker proceeded to slice his wrists on live television. Yup. Of course, it was a prop knife, but the imagery of Undertaker cutting into himself was enough for any squeamish fan, or any angry mom, to turn off the TV set.

But that was just the beginning. He then dripped his pouring blood into a goblet and forced Knight to drink the crimson gore. Still not done, Taker opened the soon-to-be Mideon’s shirt and carved his symbol into his chest.

Again, this might looked back as a bit of silly sh*t we can all laugh at, but at the time it was pure nightmare fuel for any younger, and maybe some older, fans watching.