The Beast Incarnate has been a sure fire pay-per-view monster for two decades, reaching the absolute pinnacle of both professional wrestling and mixed martial arts, earning Lesanar a top spot as one of WWE’s biggest ever stars.

On the Steve Austin Show, WWE Chairman Vince McMahon told viewers he believed Lesnar had earned certain privileges that no other star had be able to, given his conquering of multiple industries. Despite McMahon’s tolerance for Lesnar’s demands, there have been times where even Brock has pushed things way too far.

Throwing the title at Vince McMahon 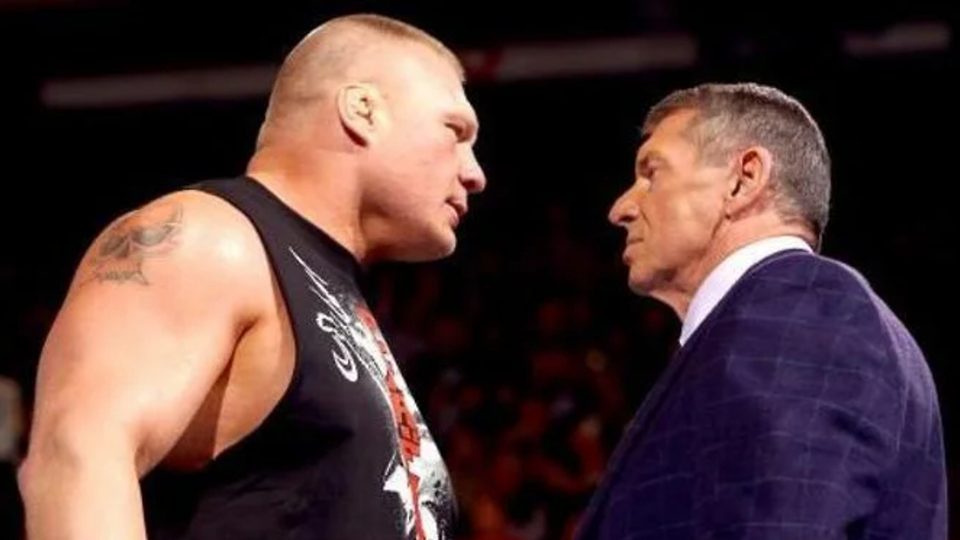 Not only did Brock Lesnar throw WWE’s most coveted championship like it was yesterday’s garbage, he also threw it directly at Vince McMahon’s face. Following Lesnar’s Wrestlemania 34 Main Event match against Roman Reigns for the WWE Universal Championship, Lesnar can be seen launching the title at McMahon in the WWE 24 Documentary footage. Afterwards, Lesnar and his advocate Paul Heyman storm off to the sound of the chairman calling him an asshole at full volume.

Vince has been known to respect ‘alpha male’ behaviour, even partaking in several physical ribs and the occasional tussle with various roster members, but surely, this is a bridge too far. Titus O’Neil was suspended for some gentle ribbing, whereas Lesnar escaped seemingly unscathed for this insane belt attack. Well, as far as we know… 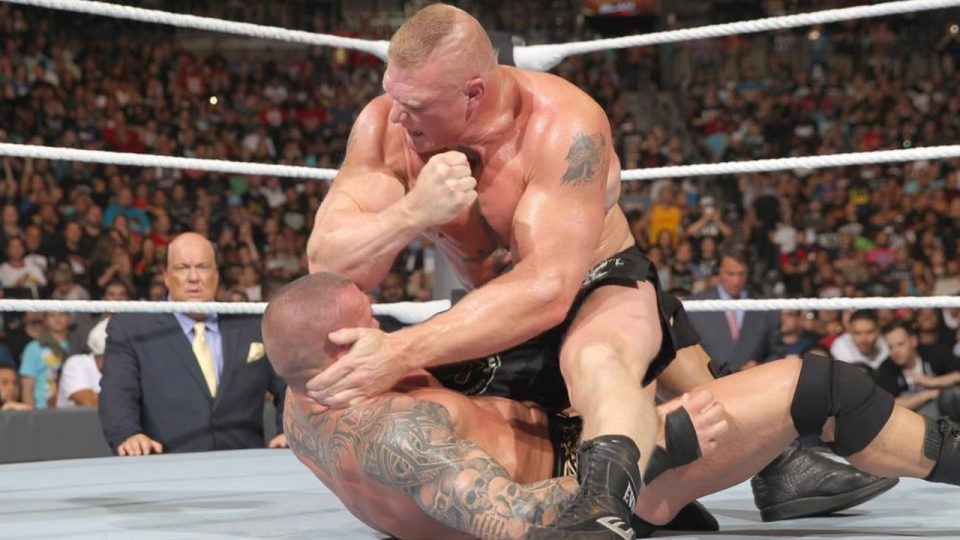 At Summerslam 2016, Lesnar was the subject of much controversy, busting open fellow main-eventer Randy Orton with some vicious ground and pound elbows, more in keeping with his UFC tenure.

The match was quickly brought to a stop, with referee Mike Choida not even sure if it was a work or not. In an interview with James Romero of Wrestling Shoot Interviews,, Choida stated the following:

“Brock gashed him open and I could tell there was something going on. But I didn’t know if it was really Brock towards Randy or if it was just Brock listening to what the office wanted him to do,” Chioda said. “Randy had a little bit of heat at that time. He gashed him open real bad over the forehead. You could tell he was going for it because he was just elbow to forehead. I was kind of shocked that they would do that because concussion protocol was still strong at that time.”

This incident caused uproar amongst viewers and the locker room, with Chris Jericho aggressively confronting the beast incarnate for taking liberties with Orton. According to Dave Meltzer of the Wrestling Observer Newsletter, a scuffle between Jericho and Lesnar was broken up by Triple H and Vince McMahon with The Chairman assuring Jericho that it was all a part of the plan.

Orton reportedly also confirmed that the angle was planned, but even so, it seems this may have gone way further than originally discussed. 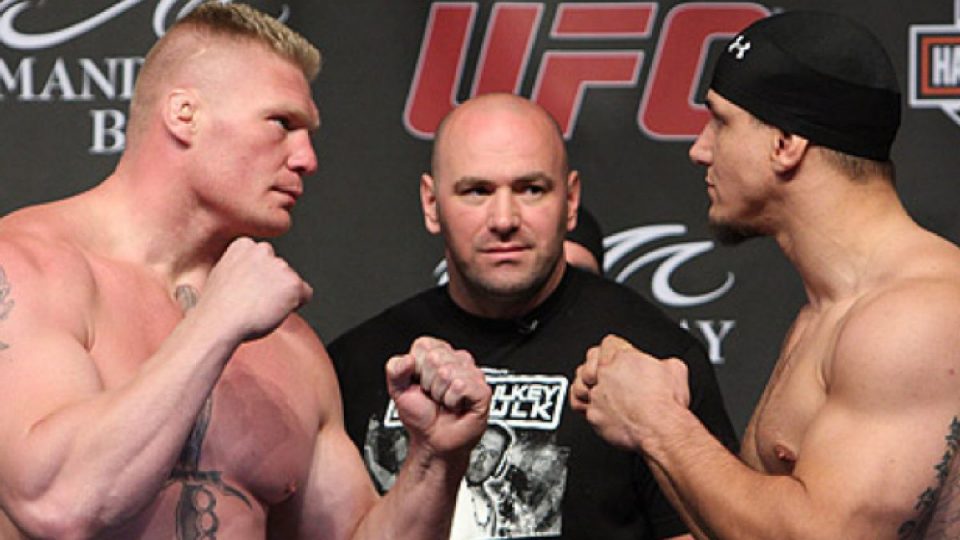 Regardless of whether we’re discussing the battles of UFC’s Octagon or WWE’s brand of Sports Entertainment, corporate sponsors are a huge potential revenue source, bringing in millions for their respective organisations.

Whilst some fighters have been respectfully outspoken about the lack of sponsor compensation for fighters, Brock Lesnar decided to go nuclear. In his UFC 100 post-fight promo with Joe Rogan after retaining the title against Frank Mir, he went after the show’s sponsor.

Lesnar announced that because he was not personally compensated as much as he felt he should have been by Bud Light, who were the UFC’s official sponsor, that he would in fact not only be drinking the beer of rival company Coors Light, but he also said “Hell I might even get on top of my wife tonight” 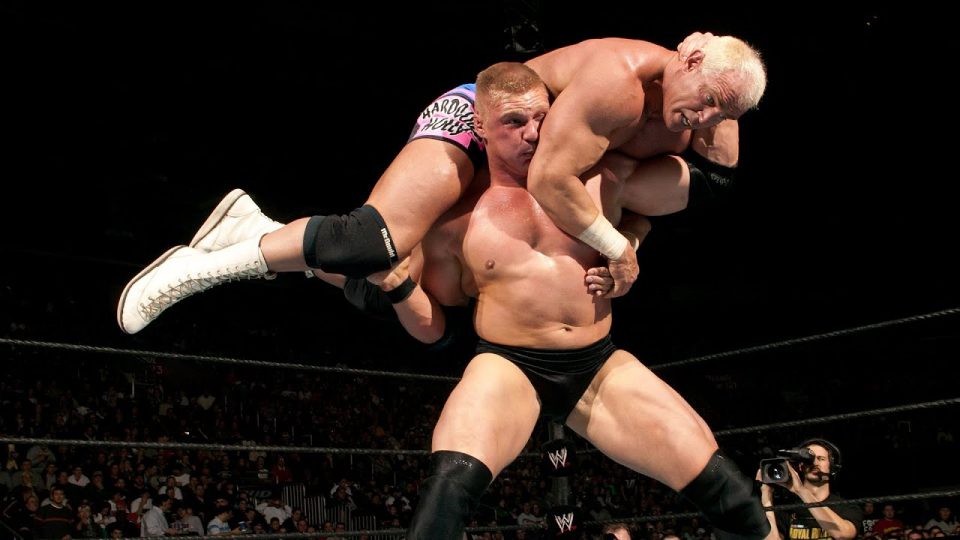 On September 12th, 2002, what seemingly began as a normal singles outing on SmackDown between Brock Lesnar and Bob Holly, quickly went awry at around the 5 minute mark. Lesnar picks up Holly, slowly and methodically into the powerbomb position before walking forward as he lowers him back down and spikes Holly directly onto his neck.

Not only this, after Holly was lying there with a legitimately broken neck, Lesnar continued to antagonize Holly by disrespectfully nudging his head and neck with the toe of his boot. Whilst there was debate of Brock’s intentions, there’s no denying that messing with an injured opponent in this way is going way too far.

The angle of the powerbomb and the behaviour afterwards, lead many to believe that Lesnar had deliberately decided to put Holly on the injury list. That was until Holly himself confirmed in many interviews that it was an unfortunate series of events that led to the mishap and nothing more sinister than that. In an interview with Diamon Joe Holly stated:

“Brock, you know, he was sick, and we’re both blown up. And he went to pick me up to powerbomb me and I tried to come up. I tried to grab his head and I couldn’t quite reach it. And he ended up, you know, we ended up going back down and he tried to hold me and that was it,” Hardcore Holly said.” (h/t Essentially Sports)

Holly would eventually return to WWE to face Lesnar in what was arguably one of the finest outings of his career for the WWE title at the 2004 Royal Rumble.

So, on this occasion, we’re forced to take Holly at his word and give Lesnar a pass. 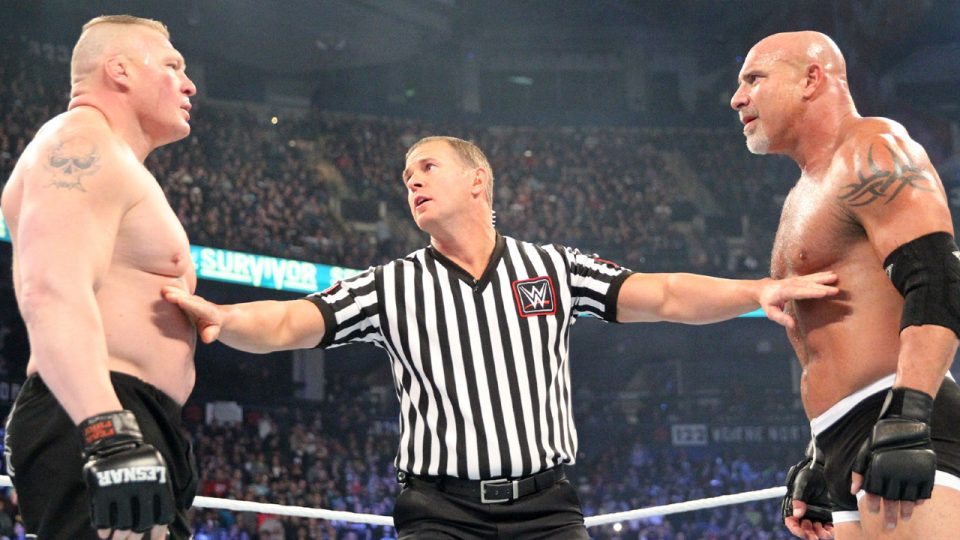 It’s October 2003 and Vince McMahon had behemoths Brock Lesnar and Goldberg as his two champions. Whilst this situation sounds like a dream for Vince, it was to become a nightmare less than one year later, culminating at Wrestlemania 20.

What was supposed to be an attraction for the ages, became quite simply a mess of an encounter at the ‘Grandest Stage Of Them All. Lesnar and Goldberg squared off in one of the strangest bouts in Wrestlemania history. With the internet becoming more prominent amongst wrestling fans, it was no secret that Goldberg was leaving the company and Lesnar was set to leave the business all together!

Brock had reportedly just signed a $45 million contract extension in the summer of 2003, before asking to get out of his contract due to his hatred of the gruelling schedule, travelling and politics. At the time the locker room were frustrated that collectively they’d given so much to build Brock, and now the favour wouldn’t be returned on the way out. To the outside world, fans were bewildered by Lesnar’s decision to walk out on top and try out for the Minnesota Vikings.

WWE allowed Lesnar out of his contract to pursue the NFL, but only if he signed a non-compete clause. Whilst the world is now keenly aware of Lesnar’s ability to dominate multiple industries side-by-side, at the time, this seemed like an insane move. To his credit, he was only cut from the final roster and was offered to represent the Vikings in Europe before trying his hand at MMA.

Thankfully for him, he was able to overturn his non-compete clause and well, the rest is history.