Zelina Vega is the new Queen of WWE. At Crown Jewel in the Kingdom of Saudi Arabia, she overcame Doudrop to become the first-ever Queen’s Crown winner.

Vega made her shocking return to WWE earlier this year after being released from the company in 2020.

The WWE Superstar burst onto the main roster scene last year. Vega’s mic skills, character and charisma was a shining light during the darkest days of the pandemic-era.

During her time in NXT, Vega thrived as the manager for Andrade and led him to championship gold.

Vega is a huge comic book and video game fan, and an avid cosplayer. As well as honouring her favourite character in her ring attire, she also regularly posts photos online dressed as anyone from Mortal Kombat’s Kitana and Mileena to Pokemon’s Nurse Joy and Mr Mime.

These are all these things we know, now here are five things you didn’t know about Zelina Vega.

Zelina Vega was a member of the TNA roster from 2011 to 2013. During this time, she went by the name of Rosita and wrestled in a tag team with her kayfabe cousin, Sarita.

The duo made a big impact in the promotion, winning the TNA Knockouts Tag Team Championships from Angelina Love and Velvet Sky not long after their debut.

Rosita and Sarita then formed the faction, Mexican America with Hernandez and Anarquila issuing in a Mexican takeover of TNA.

Speaking on Table Talk in 2020, Vega talked about her time in in the promotion:

“I think it was good for what it was. I was young at the time, I was 19 years old when I got signed when you think about it, so it’s like forever ago. But I needed that experience because it introduced me to Sarita who is still someone who I consider my cousin. We were on-screen cousins, but she’s considered family.”

After her contract expired in 2013, Vega left the company. She returned in 2015 to wrestle under her real name – Thea Trinidad – at TNA One Night Only: Knockouts Knockdown.

The Paige biopic Fighting with my Family is all about her amazing story and wrestling journey. The movie culminates in her RAW debut in which she shockingly defeated AJ Lee to become the WWE Divas Champion.

Florence Pugh plays the part of Paige, while the role of Lee was played by Zelina Vega.

Speaking to Kayla Braxton, Vega revealed she found a real connection to Lee through their mutual love for video games and nerd culture:

“Well, I play AJ Lee, the Divas Champion, and it was something that I really found a connection with her because we both were into video games, we’re both a little bit of, y’know, some nerds,” she said.

“So, it was really easy to just really submerge myself into her, and become her for that moment.”

When asked about how she got the role, Vega credited the Rock as helping her out:

I’ve known Dwayne Johnson for around 5 years now, and I was going through a period of time where I was trying to get to WWE and it was…it wasn’t easy. It took me around 8 years to get here,” she explained.

“He’s like, ‘Actually I’ve been working on something for the past few days now, give me a little bit and I’ll call you.’ And I was like, ‘OK’ and I didn’t think anything of it. And he called me and he said, ‘So I have this project that we’re working and it’s based on this documentary on Paige, and her family, and her life in wrestling and I would love for you to be involved.

So I was like, ‘OK, sweet.’ I’ll probably just get a little scene in the background and that’d be great.’ And he said, ‘No, I want you to be champion. I want you to be my Divas Champion, and you don’t even have to audition for the role, it’s yours. I know you can do it.’ Of course, the waterworks and all that came afterwards, but it was pretty incredible because he’s somebody that’s believed in me from the start.”

3. Zelina Vega has a Pokemon tattoo

Zelina Vega is a self-confessed nerd. She is a massive fan of comic books, video games and everything in between.

Vega was a guest on WWE’s The Bump. During the show, she proudly displayed her latest tattoo of her favourite Pokemon character, Espeon.

Vega has another nine tattoos on her body – one of which she shares with her husband, AEW’s Malakai Black.

The couple got matching tattoos of a sacred heart containing three daggers representing a personal meaning between the two.

Only the Queen from Queens would rock something as dope as this. https://t.co/gxV84tNPtl

Zelina Vega’s dream was to be in WWE. She and her father would watch hours of the product together and even dress up as the Rock and Lita.

After her father’s tragic passing, Vega was determined to get into the wrestling business, especially WWE in memory of her dad who tragically passed away during the 9/11 tragedy.

However, after hearing no from the promotion on many occasions, she finally achieved her dream in 2013.

Speaking on The New Day: Feel The Power podcast, Vega told them about her many WWE tryouts

“My first tryout ever was in 2010 for FCW with A.J. and Naomi. Norman Smiley and Steve Keirn were the ones running the tryout. From then on, the Usos and others, I became friends with everybody.

Fast forward, I had tryouts almost every year and they would say, no, you’re to this or that. I would try to change whatever it was. Then, your endurance wasn’t up.

Next year, I came back and upped my endurance and they said dye your hair blonde because I reminded them of Trish.

During my Rosebud time, that’s when I was blonde. It was interesting because I felt I didn’t want to say I was there already. During the Rosebud time, I always felt like it was so easy because everyone made it feel so comfortable and everyone was so welcoming to me that it felt like home.

I felt like I was supposed to be here. I just never took no for an answer.”

1. Zelina Vega is good friends with The Rock

Zelina Vega and The Rock have a special connection. The Great One was Vega’s and her dad’s favourite wrestler.

Vega’s father died on 9/11 in New York City. After his death, Vega used their connection with wrestling as her coping device.

Speaking on Chasing Glory with Lilian Garcia, Vega talked about her relationship with the Rock and how she needed to share her story with him:

“At the Barclays Center, I was an extra [at WWE RAW] about five years ago, and he walked past me and looked at me and said ‘Hi, I’m Dwayne.’ And I’m like ‘Hi, I’m Thea.’ and he goes ‘Thea what?’ I go ‘Thea Trinidad’ and he says ‘oh, that’s a cool name. My name’s just Dwayne Johnson.’ And I’m like no duh, of course you are. He walked away and I felt myself going ‘no, Thea you need to talk to him. Stop being a wuss, just go and talk to him.’

I said ‘I don’t care if I never see you again, but I just feel like I need to say thank you to you’. I told him my story and why I’m here, about my Dad and how [The Rock] was his favorite and I said ‘we have all of these amazing memories because of you.

I have some of the best memories with my Dad because of you, and I just wanted to say thank you so much because those are the ones that I really hold close to me along my journey to get here.’ And he was just like whoa, that’s so not what I thought you were going to say, and he gave me this big hug and said thank you for sharing that with me.

I thought sweet, I did it. Literally what I thought in my head—I walked away from him, and I looked up and I was like ‘Dad, I did it! I did it, I said it! He knows your name now’ That was such a big moment for me.

I didn’t think I’d ever see him again, but then I’d gotten a random text about a month later, maybe a little sooner. He said ‘I was reading some articles about your Dad and it just made our talk backstage so much more special. Again I wanted to say thank you for sharing that with me… guess who?’ And I thought this can’t be real, someone must be messing with me.”

Vega’s friendship with the Rock landed her the part of AJ Lee in Fighting with my Family and helped and supported her throughout her career. 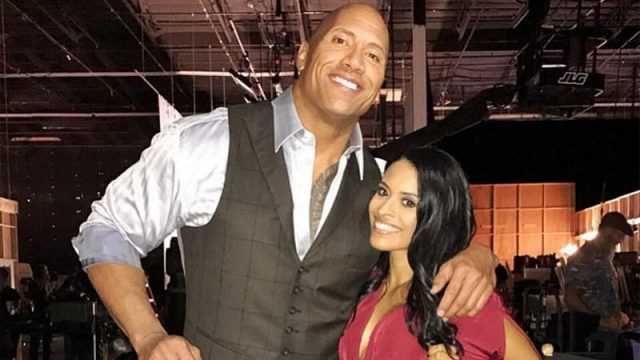