Liv Morgan is one of WWE’s most enigmatic and perhaps underrated Superstars. Having signed with the company in 2014, Morgan – born Gionna Daddio – is still yet to win championship gold, despite having an incredible following cheering her on every step of the way.

While her transformation from “Marley” in NXT to her current “watch me” persona has been staggering, even if you’ve been there every step of the way with Liv Morgan on-screen, there’s so much you may not know about the New Jersey native off-screen. At 27 years old, Morgan’s most prevalent time in WWE was as part of Riott Squad, but she’s also been involved in same-sex relationship storylines, and has a WrestleMania win under her belt!

As Liv told Inside The Ropes, she’d love to continue said storyline in the future.

“Me personally, I would love to touch on that story again, because I think it’s so important just to show not different people but, you know, ‘Hey, maybe I love this girl,’ you know, like, I think it’s important just to show that. But I don’t think you ever can ever say never in WWE. I think anything and everything is open to being visited again. Is that happening? I have no idea. But would I like it? For sure. But it was a very crazy experience.”

However, Morgan is very much looking to the future, and winning championship gold – something she said Becky Lynch believes she can do!

“Do you want to know a little secret? When Becky left, I gave her a hug goodbye and she whispered in my ear, ‘When I come back, you’re going to be champion.’ I’ve thought about that every single day, and she’s back and I’m not champion. But I am so, so, so looking forward to proving her right, maybe not in her timeline, but I’m going to be champion, and I’d love to take it off Becky Lynch.”

So what else is there to know about Liv Morgan? Well, let’s find out…

Liv Morgan was a huge wrestling fan growing up

Despite having no professional wrestling in-ring experience before signing with WWE, Liv Morgan was a WWE superfan growing up. Her introduction to the company as a performer came after being spotted at Joe DeFranco’s Gym in Wyckoff, New Jersey, where Liv was recruited to the WWE Performance Center in October 2014. However, she was hooked long before then, as Morgan told WWE.com shortly after breaking into the company.

“I grew up a huge wrestling fan. My mom was a single parent raising six kids, and she worked very hard to provide whatever she could for us. We didn’t have fancy material items, but we had cable, which meant we had WWE broadcasting multiple times a week. That completely took over our lives. I fell in love with it the first moment I watched.”

Gionna Daddio’s father passed away while she was young, and her family wasn’t affluent by any means, but her wealth came from experiences she had with her brothers in her back yard.

“We dug four poles into the ground and put lawn chairs in front of them for buckles. We tied three pieces of industrial rope around the corners, and the only mat we had was a stacked-up pile of lawn chair cushions. When we finished, we thought it was the most awesome thing ever, and my house instantly became the after-school spot for all of my brothers’ friends. I would literally take pedigrees and powerbombs like it was my job. I always pretended to be Lita. All the Divas were so glamorous and girly, and I was such a tomboy and didn’t have nice clothes. When I saw Lita come out in baggy pants and sneakers, wrestling the boys, I thought she was the coolest thing ever. I related to her.”

Liv Morgan doesn’t have many visible tattoos – but she does have one very important one on the back of her neck. “11-21-17” in blue, red and green.

The tattoo is a reference to the November 21, 2017, episode of SmackDown, then known as SmackDown Live, where the Riott Squad made their WWE debut by attacking several WWE Superstars. While the moment marked the main roster debuts of Morgan, Sarah Logan, and Ruby Riott – now Ruby Soho – only Liv Morgan remains in WWE. However, the date will be etched on the skin of all three women for the rest of their lives.

Liv Morgan used to work and model for Hooters

While Liv Morgan’s professional wrestling career has only involved wrestling within WWE, and she did so from the age of 19, Gionna Daddio has two previously known occupations. The New Jersey native was a competitive cheerleader, but also worked and modelled for restaurant chain Hooters.

Speaking on her WWE Network special, Morgan detailed how Hooters gave her an opportunity – and that she made the most of it. She also previously joked about dressing as a Hooters girl for Halloween.

“Hooters not only gave me a job but gave me an opportunity. Something I needed at that time. It was the first time in my life I had responsibility. Even if it was as simple as making sure your wings were hot and your beer was cold. I took it and ran with it.” 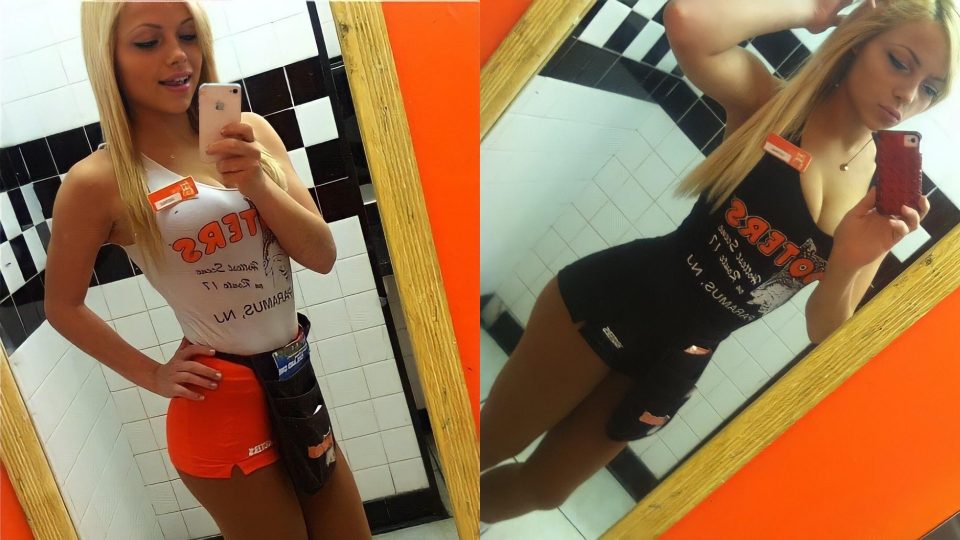 Not only did Gionna Daddio work at Hooters, she also appeared on their branded playing cards, which came to light just last year after one fan noted how difficult it was to track down the set, while sharing a photo of a young Liv Morgan posing in a bikini next to a tree. Morgan shared the photo with a caption of her own.

“Hahahahahah this was the first time anyone has taken a photo of me ever that wasn’t for school. They put me next to a tree and starting shooting I was like …”

Hahahahahah this was the first time anyone has taken a photo of me ever that wasn't for school. They put me next to a tree and starting shooting I was like … 😶😶😶😶😶 https://t.co/LjvX5vRFI4

Liv Morgan stumbled across a previous gimmick by eating candy

Liv Morgan has had many different characters in WWE, but perhaps the most enigmatic may have just been when she appeared on Raw every week with a blue tongue. While many were left wondering as to the origins of why, Morgan elaborated – and her answer surprised everyone.

“So everyone has been asking me, “Liv, how do you get your tongue so blue or why is your tongue blue?” And I see you guys posting on social media, so I thought I’d let you in on my little secret. I like candy and the color blue. [Liv burps] I’ve been doing the blue tongue since I’ve been on a Raw. And really what had happened was I was backstage and I kind of just wanted like a piece of candy. So I find a Jolly Rancher and I popped into my mouth and I’m like going backstage. I’m getting ready for my match. I’m getting all pumped. And then I like, look in the mirror and I see my tongue is blue. And I was like, ‘Oh, well, that’s weird.’ But I was like, #’t’s kind of it’s kind of cool. Let me just go out there.’ So I go out there and I fully expect coming to the back and then being like, ‘What’s wrong with you? Why is your tongue blue?’ But no-one said anything. So I’m just like, ‘OK, I’ll just keep doing it until they say no.’ But no-one said no, so I’ll just keep doing it.”

Liv Morgan has since stopped performing with a blue tongue, but the feature was a long-running Easter Egg of her Riott Squad stint.

We mentioned earlier how Liv Morgan’s pre-WWE careers were pretty unknown due to the young age she started wrestling, but Gionna Daddio is definitely preparing for life outside the business! As well as running a hugely successful YouTube channel with 87,000 subscribers where she tried hot sauces, makes dessert, and tie-dyes clothing, Daddio also keeps her fans up to date with the goings on regarding where she lives.

Now, that may not seem too strange…until you realise that Liv Morgan lives on a farm!

Just me and the crew 🖤✨🐮 pic.twitter.com/Uveu0KYq6s

As well as looking after a herd of cows, Daddio mucks in by clearing out her chicken coop – and that’s not all. According to an article by Figure 4 Online’s Josh Nason, the outlet’s figurehead, Dave Meltzer, confirmed that Morgan lives on the farm with Bo Dallas and that the pair had started a business.

“Meltzer said he is living with current WWE star Liv Morgan on a farm and they are preparing to start a family real estate business to prepare for life after wrestling.”

Just last year, Liv Morgan shared a photo on Twitter of several books and her computer, suggesting she was taking up a real estate course at the Bob Hogue School of Real Estate.