As one-third of Toxic Attraction, Gigi Dolin has taken over NXT 2.0.

The then-named Priscilla Kelly signed for WWE earlier this year after seven years on the independent scene. However, she was no stranger to WWE having participated in the promotion’s second Mae Young Classic in 2018.

Her first action as Gigi Dolin was as a participant in the first-ever women’s Dusty Classic.

After a few months, she was scouted by the returning Mandy Rose. Along with Jacy Jayne, the trio became known as Toxic Attraction and put the entire division on notice.

At just 24 years old, Gigi Dolin is a bright star with an even brighter future. Here are five things you didn’t know about her.

7 years of hard work, tears, blood and determination.. All over the world, multiple countries, multiple companies.. In front of thousands and in front of 5 people in school gyms…

Tonight is what it’s all about.

Tonight, these other teams don’t stand a chance.🥀🪜 #wwenxtpic.twitter.com/2wcYn3Fryx

As well as being a well-known performer in the ring, Gigi Dolin has also worked as a valet. Her most notable role as a valet was in EVOLVE with now WWE Superstar, Austin Theory.

After a long losing streak, Theory turned heel with the assistance of Hell’s Favorite Harlot. The partnership paid dividends as Theory began picking up victories with Dolin in his corner.

With Dolin’s support Theory victories turned into championships such as the FIP World Heavyweight Championship and the WWN Championship.

Back in 2018 Gigi Dolin and Darby Allin were married. The young couple met earlier that year and after only four months of dating were engaged.

The couple were married for two years, but in 2020 announced their divorce.

Speaking on Excuse Me: The Vickie Guerrero Show Dolin talked about her marriage to Allin and despite getting divorced they still remain close:

“With us, we realize we got married really young and really fast. He proposed after dating me for four months.

“That works for some people but for us, we realized we were not mature enough to handle that label of marriage.

“Sometimes just the label of marriage can add so much pressure and stress to a relationship.

“It’s hard to get people who haven’t been married to understand that. Let’s remove this label and then let’s see how things go.

“Since we removed that label of being married, we’ve been getting along great. We are best friends. We hang out all the time. We never have any conflict. We both still have little issues.

“It’s a lot all at once. I think people need to stop damning the word divorce because it sounds horrible, but sometimes you can get a divorce, spend a few years learning about yourselves and mature as a human being, and years later, try again and it probably would be a lot better.” 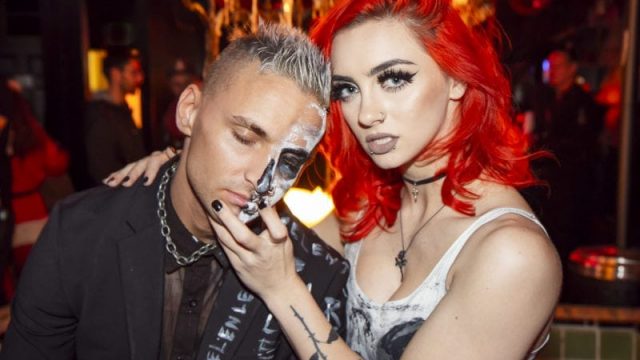 In 2019, Dolin made a surprise appearance at All Out’s Casino Battle Royal. The following year she wrestled Britt Baker on AEW Dynamite. Although, those were the only time she appeared for the promotion.

However, there were talks between AEW and Dolin about her joining the company. Speaking on Excuse Me: The Vickie Guerrero Show, Dolin revealed the details of those talks:

“The thought was flown around for me to be put with him (Darby Allin) in AEW. They said ‘You come in and you are his wife. You get kicked in the face and then he gets mad.’ There were a lot of ideas thrown around from this person and that person about this and that.

“I explained to everybody that I could come in and do a wife spot that could eventually lead to me having matches or whatever it may be. But, here’s the problem with that. If I came in and I’m introduced as Darby’s wife, I’m forever by the fans going to be known as just his wife.

“Then from there on out, everything I do in the ring or on a promo is going to be heavily compared to him and I immediately become Robin to Batman. I think so many people don’t realize, and I’m sure a lot of women would be ok with that kind of role, but me personally when I’ve worked just as hard and just as long for my career, I don’t want my entire work and passion to be credited or overshadowed by your partner.

“I always wanted him and I to be seen as an equal powerhouse couple where we both bring our own thing to the table. People want to put you together with whoever you are dating.”

2. Gigi Dolin has a controversial past inside the ring

Before her days as Gigi Dolin in WWE, she made wrestling headlines for her part in the infamous “tampon incident.”

In 2018 at an event in Los Angles Dolin was involved in a match against an opponent named Tuna.

During the match, Tuna was sitting dazed on a chair when Dolin removed a “used” tampon from her tights and shoved it into her opponent’s mouth.

A clip of the incident when viral and became a major talking within the wrestling community.

Names such as Jim Ross, Gail Kim, Road Dogg and of course Jim Cornette blasted the segment while Taz, Gregory Helms, and Reby Sky came to her defence.

In an interview about the controversy, she told Wrestling Inc. why she did:

“It’s just hypocrisy because people say I’m disgusting and I don’t know how to entertain. I was doing something that was entertaining to myself and I didn’t do that to gain the attention of the internet.

“I didn’t know it was going to be a big deal, as I’ve said before, when you do a show like that, you don’t know that footage is gonna make it anywhere.

“A lot of matches are filmed that never see the light of day, so I thought it was something funny and something to entertain myself with.

“There were a lot of men that didn’t like but I would say the more hateful comments were from women actually. Most of the bad, bad heat came from women.

“When you come to the business side of pro wrestling, there were a lot of men speaking out saying they liked it. They thought it was cool and different. Just to name a few, Taz and Tommy Dreamer spoke about it.

“But there were a lot of women who wanted to bash me. They said it was counteractive to the Women’s Revolution.

“I’ve even had girls tell me they enjoyed my tampon spot and they wish they could have done something like that themselves, but they are too scared. And that’s what wrong with things because men aren’t scared to do anything.

“Men aren’t scared to push the envelope because nobody will put them down for it.”

1. Gigi Dolin was on the TV Reality show ‘My Big Fat Gypsy Wedding’

At the age of 14, Gigi Dolin was the focus of the first season of My Big Fat Gypsy Wedding.

On the show, Dolin was in search of a husband, however, that was not the case. Dolin revealed her featured episode tried to make it look like she was attempting to get married at such a young age was untrue.

Speaking to Wrestling Inc. Dolin talked about her time on the show and how it misrepresented her:

“No disrespect to that TV show, but it was very much a fake story going into that. It was supposed to be one thing but it ended up being very scripted and not what we expected it to be.

“Everyone thinks that show was so true and accurate about how life really is. It’s completely false; everyone still thinks I was trying to find a husband at 14 and that was the biggest lie.

“I was basically shamed from any type of sexuality and that does travel into my wrestling persona. That’s why I became who I became. I was under such a strict household that I wanted to express myself.”