Dr Britt Baker DMD is the face of AEW’s women’s division and she fought like hell to get there. Baker boasts an impressive resume from her time on the independent scene. She was the first-ever IWC Women’s Champion and went on to hold the title twice. She wrestled for multiple promotions such as Shimmer, RISE, and Ring of Honor to name but a few.

Baker was handpicked to be a part of All In, the show that many fans attribute as the precursor to AEW. At the industry-altering event, Baker participated in a four corner survival match against Tessa Blanchard, Madison Rayne, and Chelsea Green. A few months later Baker signed with the new promotion. As the first woman signed to AEW she instantly had an uphill battle against the lofty expectations placed upon her shoulders. Initially, her run as a babyface wasn’t received well by the audience and it was clear something had to change.

Last year on the Jericho Cruise after a match with Priscilla Kelly (now Gigi Dolin) she turned heel. What happened over the following months was a highly effective character shift and a massive improvement in the ring.

Speaking on the PWI Podcast Baker revealed how she dug deep and didn’t stop grinding to become the success she is today. Her grit, determination, and desire to improve ultimately led her down the path to glory.

“I will say, once the pandemic hit, I couldn’t go to the dental office anymore. I was just fresh in this heel turn, so I did nothing but professional wrestling because I didn’t have anything else to do. This was my time. I would go to the wrestling ring non-stop. I was watching wrestling non-stop. Promos, matches, everything. I was practising promos non-stop. I was bouncing ideas who I consider my mentors in the back non-stop. I was working day in and day out because I wanted to be the best.

I really wanted 2021 to be my year, I felt like I had it in me. I had everything, I just really needed to zone, dig deep down, and really get to know this Dr. Britt Baker DMD character, and own it, You have to own being a bad guy. If you’re not comfortable with it, it comes off on the screen. You have to really accept that this is who you are.”

She is a dentist, a professional wrestler and the AEW Women’s World Champion, but here are 5 things you don’t know about Britt Baker.

You may have heard this but Britt Baker and Adam Cole are a couple. But what you may not know is that they once held tag team gold together.

In 2017 at Wrestle Circus’ The Cody Rhodes Summer Circus Show the duo defeated Roppongi Vice (Trent? and Rocky Romero) to capture the Big Top Tag Team Championships. They are the only inter-gender tag champions in the (now defunct) promotion’s history.

The couple also simultaneously held championships together in International Wrestling Cartel. In 2017 Baker was the Women’s Champion while Cole was the Super Indy Champion.

As the saying goes couples who slay together, stay together and Britt Baker and Adam Cole are testaments to that. In an interview with the PWI Podcast Baker spoke about how Cole is a constant source of inspiration, support and advice.

“We are very supportive of each other all the time. He watches everything I do. I watch everything he does. It’s really cool to have somebody at home that you can just sit down and talk about your whole day with, and they understand everything that you’re talking about, and everything that you’re going through. I feel very fortunate because he’s one of the best in the world in promos and wrestling. At the end of the day, I get to come home to him and talk to him about anything.” 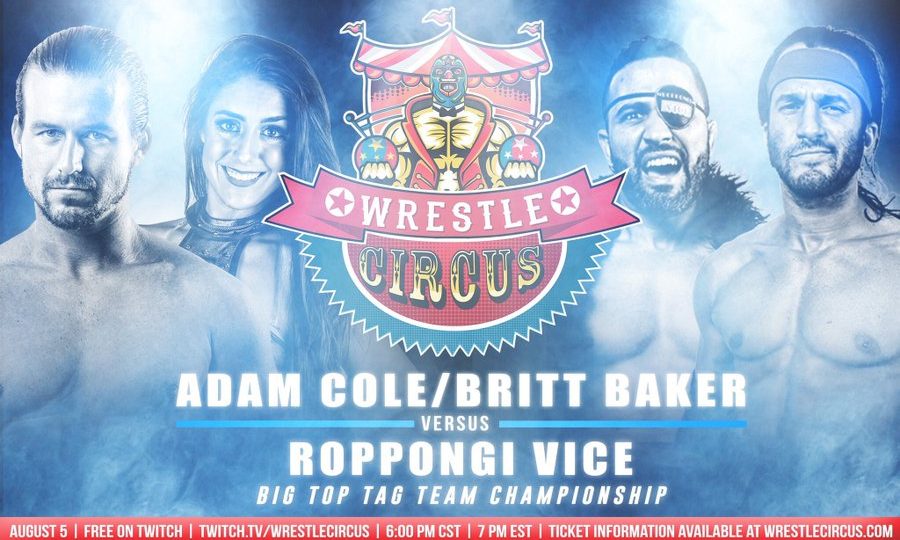 4. Britt Baker wrestled for WWE as a local competitor

In 2016 and with only several matches under her belt, Britt Baker made her WWE debut. On the July 25th edition of Monday Night RAW Baker wrestled as a local competitor against the girl who isn’t like most, Nia Jax.

As you may have gathered by the unflattering moniker Baker’s role was as fodder for Jax. Her appearance was during a time when WWE brought back enhancement matches and Jax was in the midst of a monster push. All those factors made Baker’s debut for WWE a rather brief affair.

Baker returned to WWE two years later for two matches in NXT. The first was a dark match at the second Mae Young Classic against future AEW regular Tesha Price. Her second outing was another enhancement match against Shayna Baszler, who proceeded to “break” her arm.

3. Britt Baker was trained by Johnny Gargano and Candice LeRae

Baker had always been a huge fan of wrestling from an early age, but it wasn’t until college that she got serious about training. When it came to wrestling training Baker chose two of the very best to literally show her the ropes. Baker went to Absolute Intense Wrestling where Johnny Gargano and Candice LeRae prepared her for superstardom.

Speaking to Uproxx in 2020 Baker revealed that despite being in different companies LeRae’s expertise always remains at close at hand.

“Candice LeRae actually helped train me, and even to this day she’ll watch my shows, watch the matches, she’s always checking in on me, like when I was injured, she was always making sure I was okay. She really helped me in all aspects of wrestling, kind of teaching me the ropes behind the scenes —what to do, what not to do. And obviously in the ring, she helped me learn the art of professional wrestling. She’s somebody I will always be thankful for, that I have her in my life, and get to sit under her learning tree.

I wish her the best and then some. And she still, even to this day, has so much more that she’s capable of that the world has not seen. And they just need to sit back and wait, because Candice LeRae is literally one of the best wrestlers in the world.”

Britt Baker and Tony Schiavone are not only besties on television but also in real life.

It was in an interview with Schiavone in which Baker turned heel and became the major act she is today. During her injury which kept her out of action Schiavone along with Reba/Rebel was instrumental in her growth. The “Team Britt” vignettes saw tremendous evolution of her character and mic work while cementing the trio as fan favourites despite being heels.

Over time Schiavone has become Baker’s personal interviewer on-screen and true supporter, mentor and friend backstage. He has been with her every step of the way, through the good times and the bad, all the way to the top of the AEW mountain.

Baker appeared as a guest on an episode of Rasslin’ with Brandon F. Walker earlier this year. During the interview, she spoke about how special it was to share her championship win with Schiavone.

“On the way out [of the ring] I ran into my friend, Tony Schiavone, which, was one of the best moments of my wrestling career when he was standing there and he just gives me a big hug. That was really cool because he has been right beside me on this rise to the top. Through thick, through thin, through good and bad, so he’s one of the most important people in my life, period. [Both] inside and outside of wrestling. So, for him to be there was awesome.”

1. Britt Baker’s dental studies kept her from getting signed by WWE

As you are most certainly aware Baker is both a professional wrestler and a practising dentist, which is an incredible achievement. Her life as a dentist plays into her role as a wrestler in AEW. However, it was her dental career that got in the way of a WWE contract.

In 2015 Baker received a WWE tryout. The session included the likes of former SmackDown Women’s Champion Bianca Belair, Lacey Evans and Sonya Deville. Baker had been an active wrestler for a few months but impressed those in charge.

In 2020 Britt Baker appeared on Talk Is Jericho and talked about why she wasn’t signed by WWE after impressing decision-makers.

At the very end of the camp, Canyon Ceman pulled me aside (Senior Director of Talent Development for WWE and helps oversee NXT) and if you’re an independent wrestler, Canyon Ceman is like the gatekeeper. You shall not pass or come on in to the WWE. He told me, you really did impress a lot of people at this tryout but as a father, I have a really hard time pulling someone from a professional degree for this business. And my heart just sank.

A couple weeks later, I received an email from him saying you have a lot of the qualities we look for, however, we don’t have an opportunity for us at this time, but if you have the passion to succeed in this, you will find a way to make this work throughout dental school. And I never forgot that. It didn’t work out with WWE but it worked to my advantage even better because I am able to do both both careers.

WWE’s decision not to sign Baker has certainly been to her and AEW’s advantage. In AEW Baker has become one of the best performers in the business and gave fans the history-making and ground-breaking Lights-Out match with Thunder Rosa.