Slammiversary, alongside October’s Bound For Glory, is one of IMPACT’s biggest events of the year but for the previous two years, the summer spectacular has been a bedlam for surprises. Both the 2020 and 2021 Slammiversary took place in the middle of July, just days after WWE’s Black Wednesday and Black Thursday releases became official free agents.

For the 2022 Slammiversary, however, the focus is on the esteemed history of IMPACT Wrestling, both good and bad, or in the case of the Reverse Battle Royal, the company’s very, very bad history. In classic Slammiversary fashion, a vignette has teased a litany of ex-TNA and IMPACT stars who could make their presence felt on Sunday evening, some of which could very well occur.

What else could go down at Slammiversary 2022? 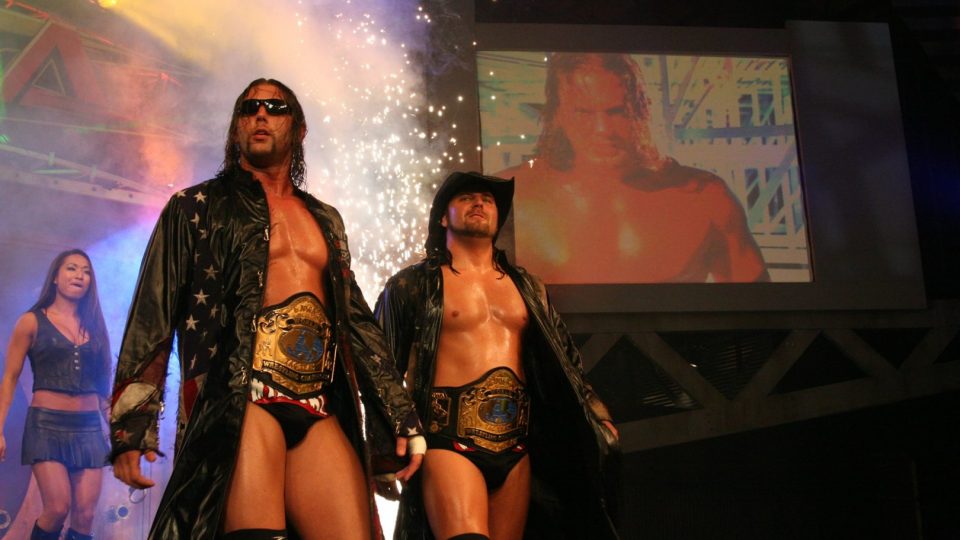 The scheduled ten-man tag team match pitting Honor No More against the TNA Originals currently has two empty spaces on the latter team. The Motor City Machine Guns have aligned with AEW’s Frankie Kazarian to contend the Eddie Edwards-led Honor No More contingent.

Who, exactly, teams with the trio will remain a mystery until right before the bell rings, although the moniker of TNA Originals whittles the list down to only a few possible options. The likes of Monty Brown and Matt Bentley have been thrown around in the conversation but arguably, no one would fit the role better than America’s Most Wanted, James Storm and Chris Harris.

Storm wrestled for IMPACT as recently as pre-Slammiversary 2021. He had celebrated 1,000 matches in IMPACT not long prior to this, during which Chris Harris – who last wrestled in 2018 – made a one-off return to celebrate his former partner’s momentous milestone. More importantly, ‘The Wildcat’ resurfaced in IMPACT just a couple of weeks ago, saving fellow TNA alum Shark Boy from Eddie Edwards.

Together, AMW were six-time NWA World Tag Team Champions; they embody the history of IMPACT Wrestling’s early history better than any other duo. A one-night-only return to the place it all began for them – alongside one last Death Sentence – would be the perfect way to celebrate the history of the promotion. 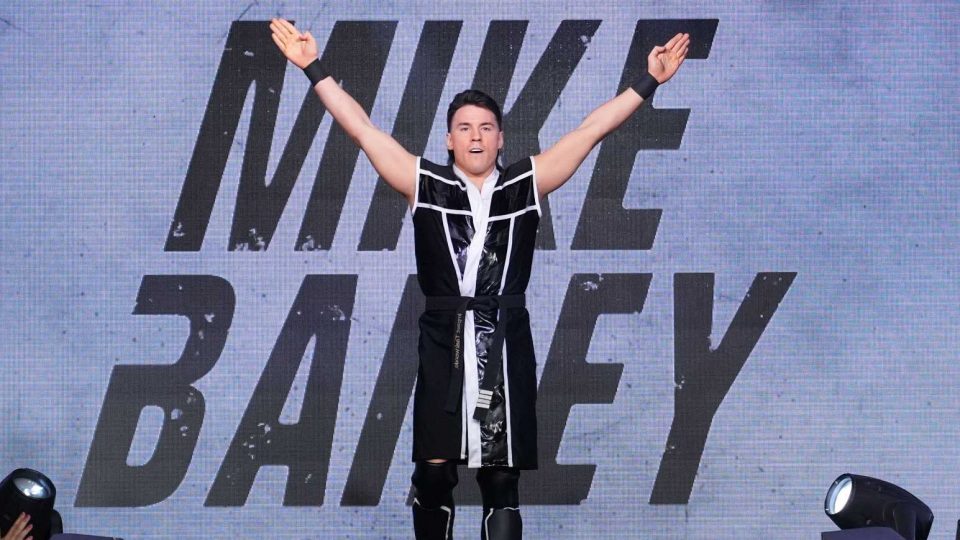 Of the nine matches currently lined up for Slammiversary, the Ultimate X match for the company’s X Division Championship is one of the trickiest to dissect. There will be so many moving parts come 19 June that it’s near impossible to properly analyse the bout and its competitors, but there’s only one right winner; ‘Speedball’ Mike Bailey.

Ever since it was announced by IMPACT that Bailey had signed a deal to join the promotion, the X Division Championship has been waiting in the shadows to be placed on his shoulder. He’s challenged for the title before, doing so in an incredible three-way contest at Rebellion that saw Ace Austin lift the championship from then-champion Trey Miguel, but entering Ultimate X will be arguably the biggest match of Bailey’s career.

The former PWG star discussed this during an interview with SteelChair Magazine’s Stephanie Franchomme, reaffirming that the X Division Championship has been his goal since he arrived in IMPACT:

“Everything I’ve been doing since I debuted with IMPACT Wrestling in January has been completely overwhelming, and I have still not processed that, within 6 months of my debut, I’ll be in Ultimate X for the X Division Championship at Slammiversary on the 20-year anniversary. It all feels like a lot. It’s a lot of pressure, but it’s also, of course, a complete honour.

Of course, it’s going to be a historic event, and I wouldn’t be in IMPACT Wrestling if I didn’t have so much love for the X-Division. The X-Division Championship has definitely been my goal for a long time, to get a shot for that at Slammiversary for the 20th anniversary is absolutely crazy.”

An Ace Austin title retention would be timely, given his recent union with Bullet Club; the same applies to Kenny King with Honor No More. Having the X Division represented by Mike Bailey, however, provides something entirely different, something remarkable, that harks back to the original X Division helmed by AJ Styles.

The Briscoes are confronted by a debuting tag team 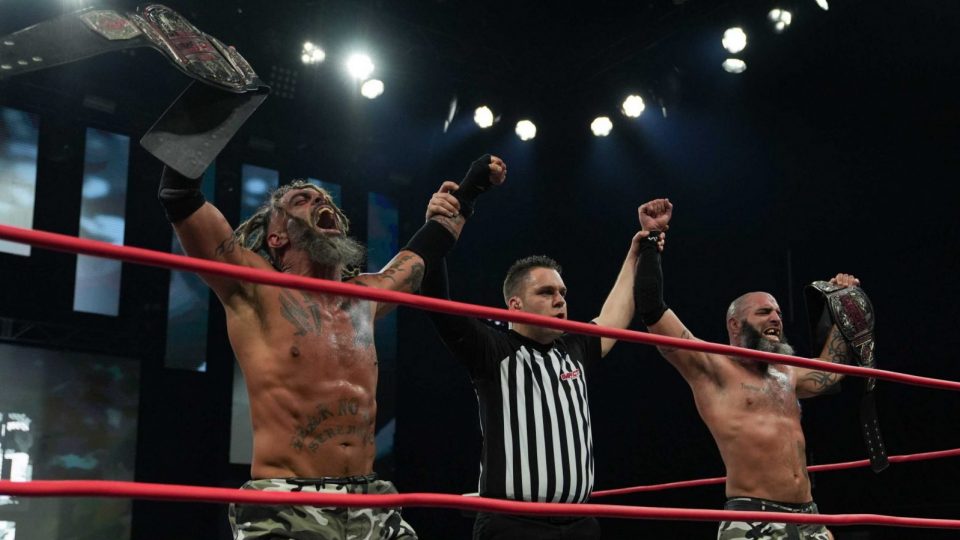 Contrary to the Ultimate X match capable of going in any direction winner-wise, the common belief is that The Good Brothers will be losing to The Briscoes, with Jay and Mark heading into Bound For Glory season as the reigning IMPACT World Tag Team Champions. Doc Gallows and Karl Anderson’s IMPACT contracts will expire in July, and there’s currently no indication that they’ll remain in the company with their success, once more, in Japan.

Regardless of the outcome, a new set of challengers will be required for the World Tag Team Championships. IMPACT’s doubles division certainly isn’t what it once was with the loss of The LAX, The Lucha Bros, The North, and others over the last few years. Even with Chris Sabin and Alex Shelley back together, and The OGK in Honor No More, something fresh is required.

In other words, IMPACT should absolutely continue the trend of making Slammiversary a fresh start for the company with the introduction of new performers. Biff Busick and Martin Stone – formerly Oney Lorcan and Danny Burch, respectively – seem like the best bet from this list.

Granted, neither was necessarily the biggest deal within WWE but on the independent circuit, they are. Both were welcomed back to the indies with open arms. Together, they’re an intimidating, barbaric duo who were never used to their full potential together while under Vince McMahon’s watchful eye that, if used right in IMPACT, could very well enjoy a natural rise through the ranks.

The Queen of the Mountain match is actually good 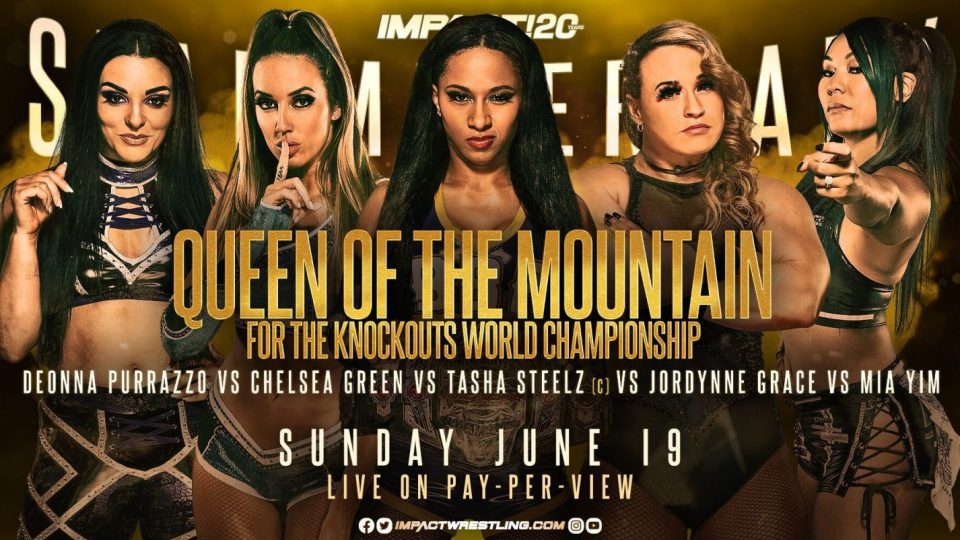 The King of the Mountain match, although good in places, was never a complete success. That’s likely the reason IMPACT has failed to promote a match of its kind since May 2016.

At Slammiversary 2022, it’s the turn of the knockouts division in the inaugural Queen of the Mountain match, with Tasha Steelz defending the Knockouts World Championship against a quartet of former champions; Chelsea Green, Deonna Purrazzo, Jordynne Grace, and Mia Yim, with another ex-champion in Mickie James serving as the guest ringside enforcer. The ingredients are there for a buzzworthy encounter.

Mia Yim, who only returned to IMPACT a matter of weeks ago at Under Siege, has spoken of the match’s importance and the company’s trust in her being a competitor. Speaking to Inside The Ropes’ Liam Alexander-Stewart, ‘The HBIC’ detailed how having Scott D’Amore and Gail Kim’s trust has aided her anxiety:

“For them to give me the trust and opportunity to not just be a part of the company, but to be a part of a big match like Queen of the Mountain, that says a lot to me. And it helps especially with my anxiety, it helps when the office backs you up, but also when you’re put in a position where you’re surrounded by a bunch of talented women that support each other.”

IMPACT has always been progressive in the way they book and present its female talent, hence the knockouts Ultimate X match and main event at January’s Hard To Kill. If they can find a way to produce a presentable King/Queen of the Mountain match, then that’s a success in itself.

A message from Jeff Jarrett 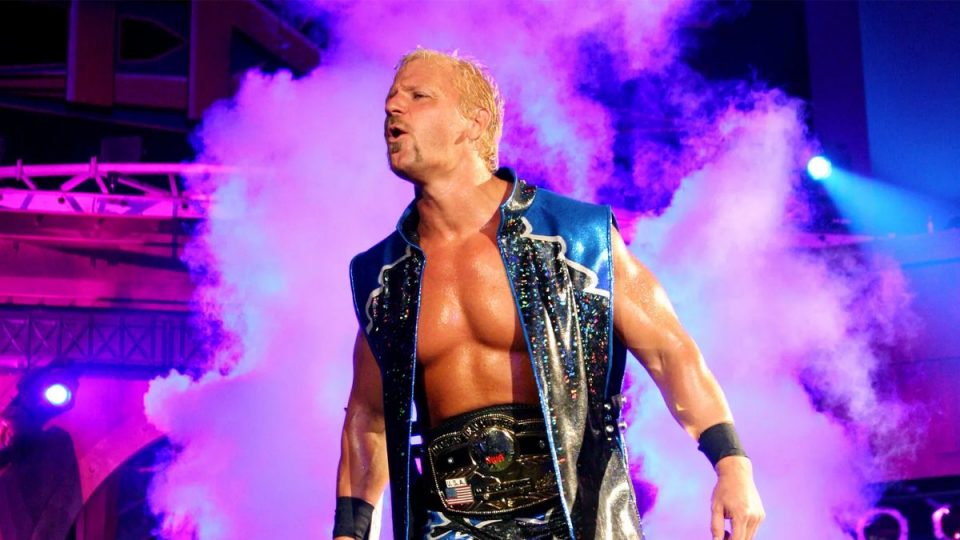 It’s unlikely Jeff Jarrett will be able to return to IMPACT Wrestling to celebrate twenty years of IMPACT Wrestling. The guy has only just returned to WWE in his new role of Senior Vice President of Live Events. A physical IMPACT return is out of the question, but a video message is entirely possible.

Of course, having one of the company’s founders in physical attendance on the night of IMPACT’s twentieth anniversary would be phenomenal. WWE have allowed WWE-contracted talent to appear for IMPACT previously (Christian at Slammiversary 2012), but that was only if they got something in return (Ric Flair, then an IMPACT personality, in attendance for that year’s Hall of Fame ceremony). There isn’t much from IMPACT that could benefit WWE in these circumstances.

Regardless, some sort of message of thanks or gratitude from ‘The King of the Mountain’ would come as a welcome bonus to Slammiversary. The company was never supposed to get this far. It needs that acknowledgement from someone who was there at the start.

IMPACT Wrestling Slammiversary goes down on Sunday, 19 June 2022. IMPACT Wrestling programming can be found on IMPACT Plus, their official YouTube channel if you’re an Ultimate Insider, and FITE TV.