Ronda Rousey made a huge impact when she made her long-awaited return to WWE during the women’s Royal Rumble match and got to point at the WrestleMania sign afterwards.

The UFC Hall of Famer and former RAW Women’s Champion outlasted twenty-nine other women to emerge victorious in her first WWE appearance in nearly three years.

After taking some time away from the ring to start a family, where she and husband Travis Browne brought a daughter into the world named La’akea Makalapuaokalanipo Browne, Rousey has wasted little time in acclimating herself back into the fold by dispatching WWE Superstars before launching SmackDown Women’s Champion Charlotte Flair out of the ring to win the women’s Royal Rumble on her first attempt.

Since her historic win she has confronted her former adversaries Becky Lynch and Charlotte Flair before choosing the latter as her opponent at WrestleMania 38.

Rousey is the Baddest Women on the Planet and returns with purpose of capturing gold at the Show of Shows. So in the lead up the Dallas, Texas supershow, here are 5 things you didn’t know about Ronda Rousey.

5. Ronda Rousey has been a fighter since birth

Ronda Rousey has made an incredible career out of fighting. But before the years of intense judo training, which led to multiple accomplishments and Olympic medals before becoming a household name in UFC, Rousey had to fight for her life.

Speaking about her birth to to Rolling Stone magazine Rousey revealed she almost died during her birth:

“I had the umbilical cord around my neck, causing hypoxia and I almost died of suffocation.”

The incident nearly resulting in her death caused complications. She experienced a neurological childhood speech sound disorder called apraxia. For the first five years of her life she barely spoke and when she did she was incapable of forming intelligible sentences. She underwent rigorous speech therapy to resolve the disorder before focusing on judo.

“She’s a born fighter. Here, we feel bad for her sparring partners. She knocks everybody out, so we hire female world boxing champions because they can take the punishment.” 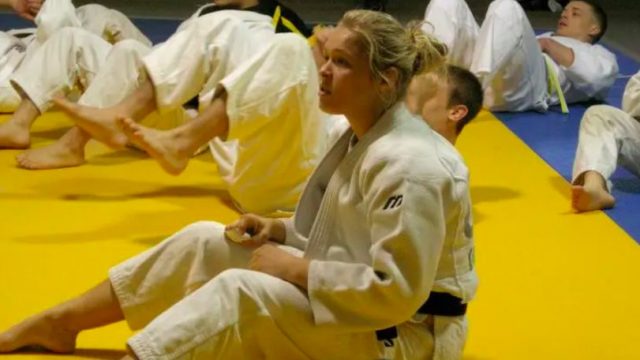 4. Ronda Rousey get her badassery from her mother

Ronda Rousey is one of the most highly decorated women in the world of sports. Her journey began in 1998 when she began training judo under the tutelage of the mother, AnnMaria “Animal” De Mars.

De Mars, a true badass herself is a 6th Degree BlackBelt judoka and the first-ever American to win a gold medal at the World Judo Championships. During her time in combat sports De Mars was known for a certain submission technique, which she would pass on to her daughter.

She would surprise Rousey every morning when sleeping in bed, leaping on top of her and locking in an armbar making sure her daughter was always prepared for combat.

Speaking to the Daily Beast in 2017, the Olympic Bronze Medallist spoke about her mother’s success and how drove and inspired her to achieve her own:

“It’s funny how a woman with a gold medal in judo and a PhD in developmental psychology can systematically mold you into a champion. She would take me to judo tournaments when I was a kid, and sometimes I’d fight in three divisions in a day and have 15 matches.

I’d go and fight, and then after my mom would make me take a nap. If I was fooling around and joking with the other kids, she’d pull me away, sit me in the corner, and say, ‘Sit there and think about winning.’ She kept me serious all day long. Returning to that mindset is something that I did every weekend for years, and it’s very easy to slip back into it.” 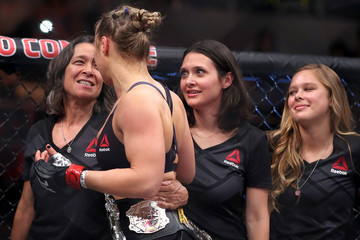 Ronda Rousey made waves when she returned to WWE as a surprise entrant in the 2022 Women’s Royal Rumble Match and made sure she ready to comeback with a bang by training with one of the best.

After her historic win at the Rumble, Rousey addressed her victory on Twitter revealing that former WWE Superstar and NXT Women’s Champion Ember Moon aka Athena Palmer helped her knock off the ring rust before the big match.

“Thank you for helping me get ready for #RoyalRumble2022 @AthenaPalmer_FG! If you want her to train you too check out her school”

The training took place at Palmer’s wrestling The Dojo, which she opened after her release from WWE last year. Having a keen and experienced hand in Athena, a fellow former champion in WWE, would’ve been key to getting Ronda back to her best in the squared circle. 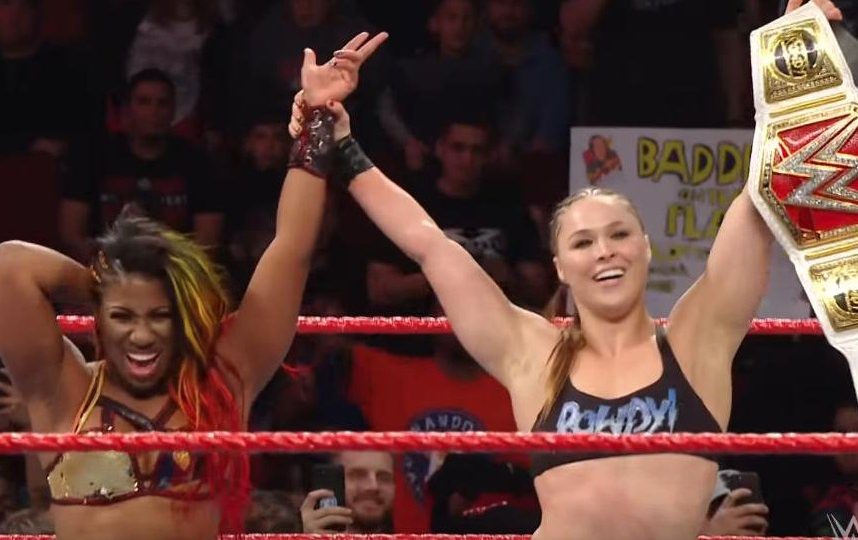 Much like her mother, Ronda Rousey was also a history-making trailblazer. Rousey was the face of American judo in the mid-2000s becoming the youngest judoka to compete at the Olympic games at age 17, but it was her transition into Mixed Martial Arts that changed the world forever.

After adopting a more physical style of judo and combining it with Jiu-Jitsu at the legendary Gracie Academy she quickly made a name for herself in 2010 by winning her amateur debut at King of the Cage: Turning Point in just 23 seconds with her signature armbar.

That same year Rousey participated in the inaugural Tuff-N-Uff 145-pound women’s tournament, where she submitted her quarterfinal opponent in 56 seconds. Rousey then made MMA headlines when she called out the Strikeforce Women’s Middleweight Champion Cris Cyborg.

The following year Rousey made her Strikeforce debut, winning her first two fights with first round submissions before defeating Miesha Tate for the Women’s Bantamweight Championship in 2012.

During this time, UFC President, Dana White was asked if fans would ever see women in the Octagon, his answer was simply ‘never‘.

Rousey’s increasing popularity and success forced White to change his stance on women in the UFC becoming the first-ever female fighter to join the company and the inaugural UFC Women’s Bantamweight Champion.

She would go on to gain legendary status inside the Octagon with her explosive performances and swift destruction of her opponents. This led to mainstream attention making her one of the most recognisable female performers on the planet.

Apart from dominating in UFC she scored movie roles, became the first woman featured on the cover of Australian Men’s Fitness, the first female athlete to guest host ESPN’s SportsCenter among many other glass-ceiling shattering achievements.

Ronda Rousey is a longtime wrestling fan with her favourite WWE Superstar being Rowdy Roddy Piper. The two share a connection that runs far beyond sharing a nickname.

Both wrestlers were trained by the legendary Gene “Judo” LeBell, in fact, it was during a training session at LeBell’s gym where Piper bestowed the Rowdy nickname upon her.

Rousey spoke about the meeting in an interview with ESPN in 2018:

“When I first started doing MMA I was trying to think of a fight name and of course the first thing that everybody thought of was like ‘Rowdy’ Ronda Rousey, and it’s like I know, but it’s like, ‘Rowdy’ Roddy Piper already has that and I don’t want to steal it.

Until I happened to see the ‘Rowdy’ one and got his blessing and he was very sweet about it,” she remembers. “He was like, ‘Sure kid, no problem. Better do the name proud’ or something like that.”

Rousey and Piper remained close as she strove to continue his legacy during her MMA career. Before her transition into the world of professional wrestling, Rousey trained with Piper’s daughter Teal.

Rousey again paid tribute to her hero when she made her first appearance for WWE at the Royal Rumble in 2108 donned in Piper’s leather jacket given to Rousey earlier in the night by his son, Colt.