WWE has held shows at some unusual venues across it’s 33 years of coming to the United Kingdom, performing at arenas, stadiums and even ice-rinks.

With WWE holding Clash at the Castle on Saturday 3rd September, at The Principality Stadium in Cardiff, marking the first major stadium show in 30 years to be held in the UK, excitement is at an all-time high for a one of a kind event experience for the WWE Universe this side of the pond.

No strangers to these shores, WWE held its first UK show in October 1989 at the London Docklands Arena, serving up a treat of action that included Hulk Hogan vs Randy Savage for the WWE Title as well as such epic bone benders as Boris Zhukov vs Koko B.Ware. The talent roster didn’t matter, UK fans ate it up.

Prior to this September’s Clash – SummerSlam 1992 remains the biggest event to ever hit the UK with a whopping 80,000 plus filling the iconic old Wembley Stadium to witness the British Bulldog defeat Bret Hart for the Intercontinental Title in the main event. As well as the epic encounter between Randy Savage and The Ultimate Warrior for the WWE Title.

33 years later and the WWE continues to visit the UK, traditionally holding Raw and Smackdown tapings regularly before the pandemic as well as WWE Live! house show tours as it goes around its traditional European tour loop.

As well as several UK exclusive big shows at top arenas, the WWE and its Superstars have performed at some unique and unusual UK venues over time. Here we take a look at five of them.

A traditional concert hall venue and one of the country’s most distinctive buildings, due to its dome shape appearance, wrestling has a rich history and connection with the venue and can date back its origins at the hall to 1904 when WWE Hall of Famer George Hackenschmidt defeated then-American champion Tom Jenkins in two straight falls.

Wrestling shows took place at the venue throughout the 1950’s up until the early 1990’s featuring the heavy hitters of the UK wrestling scene at the time, including in the 1980’s heyday. Big Daddy, Otto Wanz and Danny Collins, wrestling before an avid fan base and an occasional Royal Family member.

It took WWE until 1991 to invade the Hall with the legendary Battle Royal at The Royal Albert Hall event where The British Bulldog, the UK’s favourite son, overcame 19 opponents in the Battle Royale finale, to win the ‘prestigious’ Royal Samovar Trophy (a tea urn), last eliminating Natural Disaster, Typhoon over the top rope.

At a recent meet and greet, Fred Ottman (Typhoon) said, “I was always the bridesmaid, never the bride” in specific reference to being runner up here. Later that same week, Sumo wrestling invaded the Hall too, with a five night tournament, which was the first official tournament to be staged outside of Japan in the sport’s 1,500 year history.

WWE returned for sporadic house shows after the Battle Royal event, most famously in 1994 when Mo and Mabel of Men on A Mission won the WWE Tag team titles in a reported unplanned finish over champions, Jacques and Pierre of The Quebecers. A rare house show title change, and the first time the tag titles changed hands in the UK, WWE rectified the ‘mistake’, with The Quebecers winning back the gold later that week in Sheffield. Both title changes were acknowledged on WWE television the following week.

In 2015, Lucha Libre arrived at the Hall, with Mexico’s luchadores thrilling the London audience before WWE returned in 2018 for the two night United Kingdom Championship Tournament event which saw Zack Gibson win the tournament in night one, only to fall to reigning UK champion Pete Dunne in night two.

A brilliant NXT Tag Title encounter kicked off the second night, as Trent Seven and Tyler Bate, the UK’s very own Moustache Mountain defeated The Undisputed Era’s Kyle O’Reilly and Roderick Strong to capture the belts. 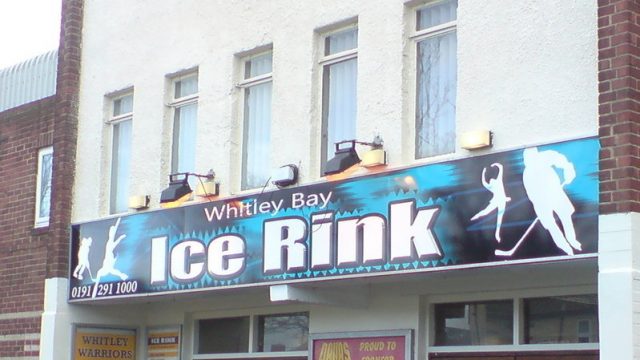 Not just used for Whitley Warriors Ice Hockey matches, indeed at one time, Whitley Bay Ice rink was the region’s premier concert venue, hosting concerts from Wham, KISS and Kylie Minogue amongst others, before the Newcastle Arena opened in 1995.

One of two permanent public ice rinks in the North East, the venue also hosted WWE in 1993, with both legs of The European Spring Tour house shows that April, taking place on the covered ice. The shows featured Mr Perfect vs. Lex Luger in one main event and Bret Hart vs. Bam Bigelow in the other a few days later.

A December return event saw The Undertaker battle Yokozuna for the WWE Title in a bout held just weeks before their Casket Match at Royal Rumble ‘94. Elsewhere, the Smoking Gunns defeated the strange combo of The Red Knight and The Black Knight, Shawn Michaels’ ‘Knights of the squared circle’ who had recently competed at the 1993 Survivor Series.

Strangely, WWE has held more events at the 3,200 seat venue than the sport boxing. Although once Chris Eubank defended his titles in the main event on the only major boxing card held there.

Today the venue is now home to a new entertainment suite and a conference facility, as well as of course, ice skating. 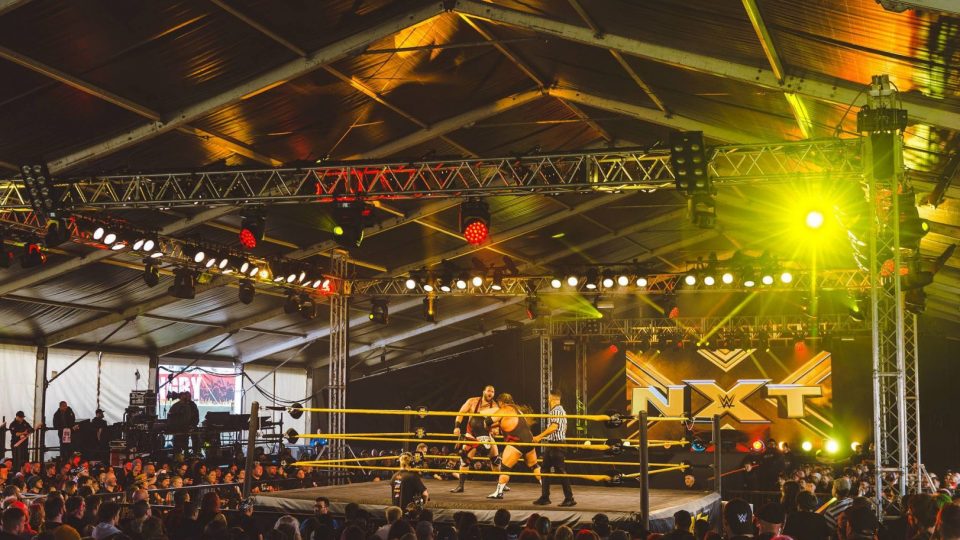 The UK’s Premier Rock and Metal event housed WWE NXT and NXT UK over the course of the festival in June between 2016-2019, with several events and TV episodes filmed during the tours.

Housed in a massive tent/gazebo, creating a mini arena on the site field, the initial events featured Samoa Joe as the very popular NXT Champion and Asuka as the NXT Women’s Champion.

Metal fan Aleister Black headlined in 2018 and even introduced band Code Orange on to stage the year before. Bobby Roode made his NXT in ring debut at the festival in 2016.

By 2019, the event had become a main stay of the festival and featured stars such as Damien Priest, Toni Storm, Deonna Purrazzo and Matt Riddle, who wrestled in front of unique, rowdy and enthusiastic crowds, getting themselves pumped for sets by headliners Def Leppard, Slipknot and Tool.

The long established Rock ‘n’ Wrestling connection had found a new home, with these unusual events in unique UK setting.

A 3,000 seat capacity venue housed within the Winter Gardens complex in Blackpool, the ballroom, a grade II listed building was built in 1986. It’s floor, containing 10,000 pieces of oak, mahogany and walnut laid over 1,320 springs, making it one of the few remaining sprung dancefloors in the UK.

The venue doesn’t just cater to dance competitions however, and has held a variety of events throughout the years, including trade fairs, party political conferences and the annual World Match Play Darts tournament.

WWE came calling in January 2017, wanting a unique venue and setting to launch their inaugural UK Championship Tournament. Held over two nights from January 14-15th, the event had been hurriedly arranged in December 2016, with Triple H announcing the proposal from London’s 02 Arena.

Sixteen UK wrestlers took part across the two nights, in one of WWE’s best booked and formatted tournaments in history.

After four rounds in the tournament bracket, it was The West Midland’s own Tyler Bate who stood tall as first WWE UK Champion after besting Pete Dunne in fifteen minutes to win the title.

The Empress Ballroom added to the gravitas and importance of the event, with the enthusiastic UK crowd tremendous throughout this historic slice of WWE action. 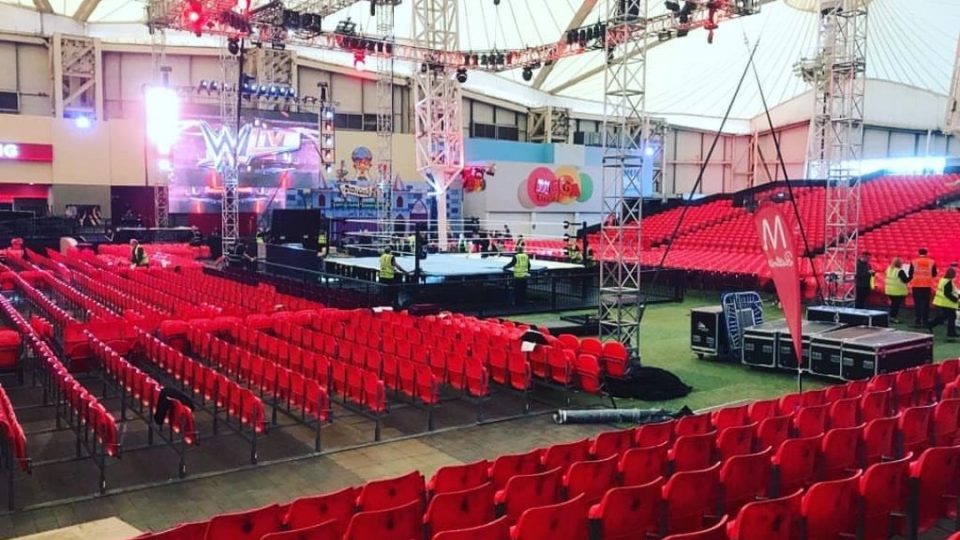 Butlins Resort Minehead is the largest Butlins holiday camp, situated on the South West Coast, the camp opened in 1962 and remains operational to this day.

In 2007, The Survivor Series Tour saw Batista, Matt Hardy and The Undertaker defeat Finlay, MVP and The Great Khali in a six man clash, whilst the main event in 2009 with The DX Invasion Tour seeing DX members, Shawn Michaels, Triple H and honorary member for the night John Cena, defeat The Legacy Trio of Randy Orton, Cody Rhodes and Ted Dibiase Jnr.

The Redcoats had never seen action like this before at the resort with the yearly shows proving popular to the family audience staying on site as part of their holiday packages.

At the theatre that housed the ring, unusual props from other Butlins events could often be seen in the background, with castle backdrops and occasionally a Billy and Bonnie Bear mascot sighting.

The final event to take place at The Butlins Arena on November 9th 2019 was headlined by Roman Reigns defeating Baron Corbin as part of the WWE World Tour.