Countless wrestling video games exist in the world, but only a few that you can call true pioneers of the genre.

It’s quite a strange time at the moment. Well, obviously, but apocalypse aside, we wrestling video game fans have had very little to get our greasy hands on.

Sure, there were a few games released this year like All Elite General Manager on mobiles, Retromania and Wrestling Empire, but nothing that compares to the sheer volume of options we had back in the day, during wrestling’s hottest era when you had more games than you could shake a kendo stick at.

Take the year 2000 for example. That rotation of the sun saw the release of WWF Smackdown!, WWF Royal Rumble, WWF Smackdown! 2: Know Your Role,

ECW Hardcore Revolution, ECW Anarchy Rulez, WCW Backstage Assault, Grand Slam: All Japan Pro Wrestling 2000 and many more, and yes, that list was necessary to showcase how big the wrestling game business was back then and not just there to serve as word count filler.

So why we wait for the AEW console game and WWE 2K22, let us reminisce about some of the most important wrestling games ever made.

By the way, important doesn’t mean best, before you all kick off for Here Comes The Pain not being included. Otherwise, we will all be here crying about the brilliance of WWF No Mercy yet again, and I’m sure most of us do that on a nightly basis anyway.

These are the games that paved the way for one of the biggest genres in video games. 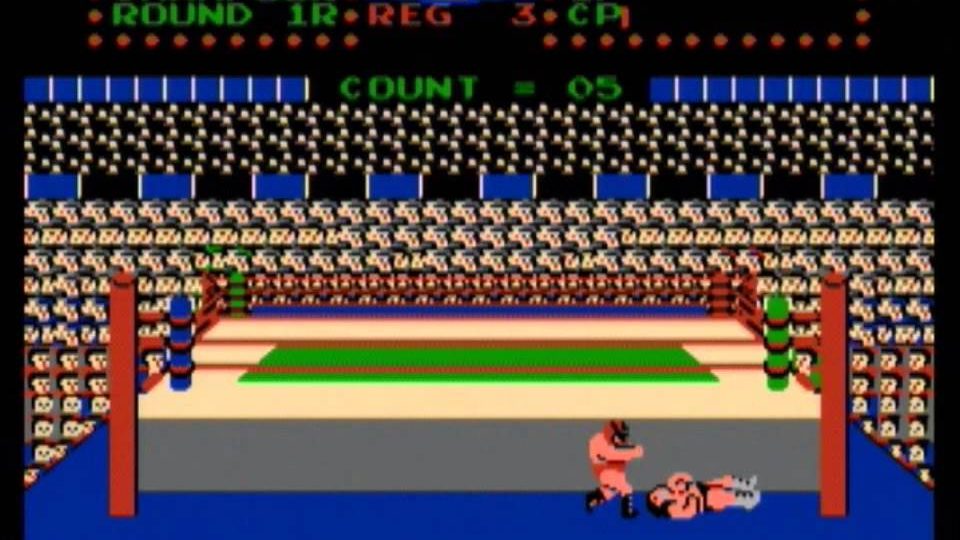 Released in arcades way back in 1983 it was the first game to be set in the confines of a pro wrestling ring. Players would assume the roles of Jocko and Spike (or Terry and Sunny in Japan) as they faced against the heel team of The Mad Maulers in a series of bouts before eventually being crowned champion.

The gameplay would feature a joystick and two buttons, select and action, with players controlling character movements and responding to commands and options displayed on the screen. No counter bars or submission mini games back then kids, it was a far simpler time.

Over the years it would be ported to various home consoles, with the NES being the most popular incarnation in 1986. This version featured two tag teams, The Ricky Fighters and The Strong Bads, the latter being the inspiration for the famous Homestar Runner character 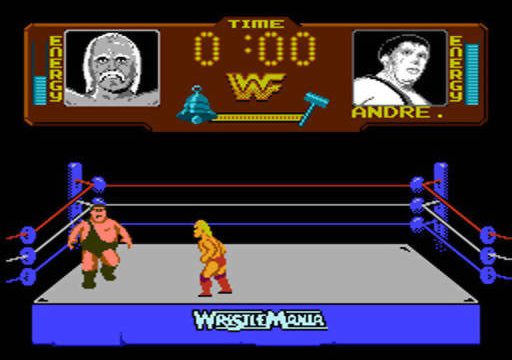 WWF WrestleMania wasn’t the first official WWF video game. That honour belongs to Microleague Wrestling released two years prior, a turn-based strategy game whose premise was, quite frankly, preposterous seeing as Tag Team Wrestling managed to put grapplers in a fighting game format before Hulkamania was even a thing.

No, it wasn’t the first, but WWF WrestleMania was the first “proper” licensed wrestling action game, allowing fans to players to control their favourite superstars in real-time with its debut on NES back in 1989., rather than just shout commands at them like testosterone-fuelled Pokémon.

Fighters included Hulk Hogan, André The Giant, Randy Savage, Ted DeBiase, Bam Bam Bigalow and The Honky Tonk Man. You could do a variety of moves, including a few off the top turnbuckle, and a fun mechanic meant that Hogan was the only character who could power slam Andre The Giant.

The game was a success and kicked off a new annual moneymaker for WWF, with at least one new WWF/E video game being released every year since the only exception being in 1997. However, after a year off, 1998 would see a big shakeup in the wrestling game world with the release of… 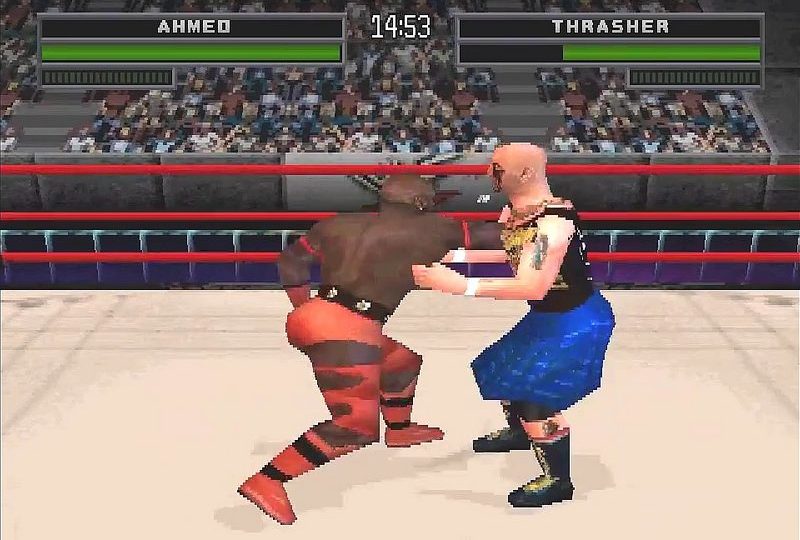 By 1998, the Attitude era was truly well underway, and WWF Warzone became the flagship title of a new generation of wrestling games.

It was the first WWF game to feature full 3D polygonal models and the PlayStation version took advantage of the systems CD format by incorporating full-motion video and high-quality audio.

Groundbreaking at the time, but WWF Warzone has not aged very well from a gameplay point of view, however, there is one feature that grants it a place on this list. Create-A-Wrestler.

There had been wrestler editor modes before, but Warzone was the first to let you create a superstar from scratch. You could finally put yourself in a WWF ring, or create whatever creature you nightmares could come up with thanks to its wealth of options.

The hilarity of Create-A-Wrestler not only attracted a bigger audience for wrestling games but became a staple for video games in general.

So the next time you spend hours building yourself for an adventurer in Skyrim, Fallout, or any game that lets you adjust your gaming avatar to your specific choosing, be sure to give thanks to the Warzone. 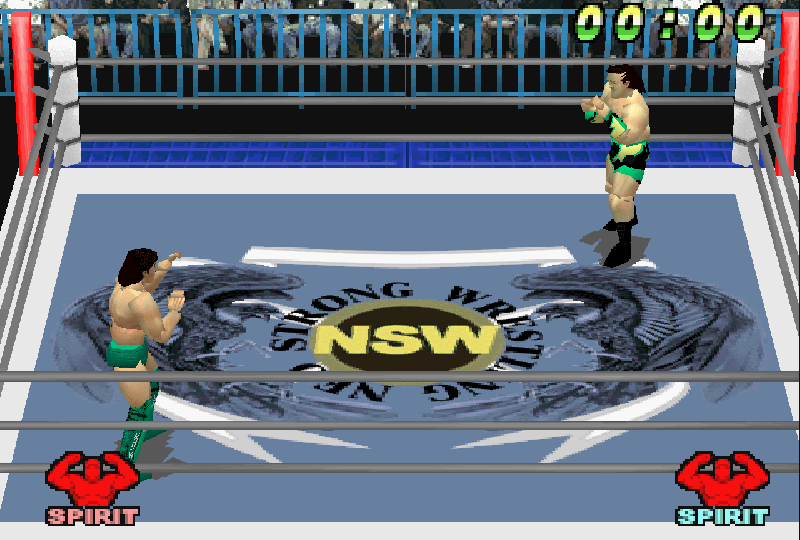 Released in Japan back in 1996, Virtual Pro Wrestling was the first wrestling game developed by the AKI Corporation. It would feature several characters based on real-life Japanese wrestlers and wowed players and critics with its brilliant gameplay engine.

With a variety of striking and grappling attacks with different levels of strength, Virtual Pro Wrestling was easy to learn but took practice to master.

The game was retooled for its western release as WCW vs The World, and partnering with THQ, AKI would start an epic legacy of evolution. The mechanics would become more refined with each future game.

WCW vs nWo World Tour, WCW Vs nWo Revenge, before in the style of The Radicalz, THQ and AKI jumped ship to WWF. It was this partnership that brought us WWF Wrestlemania 2000 and of course, the game that fans consider to be the WM 17 of wrestling video games, WWF No Mercy.

Despite having its origins on the PS1, the later games would be N64 exclusives, leaving a big gap on the PlayStation front that THQ would have to fill, and fill it they would, with the release of… 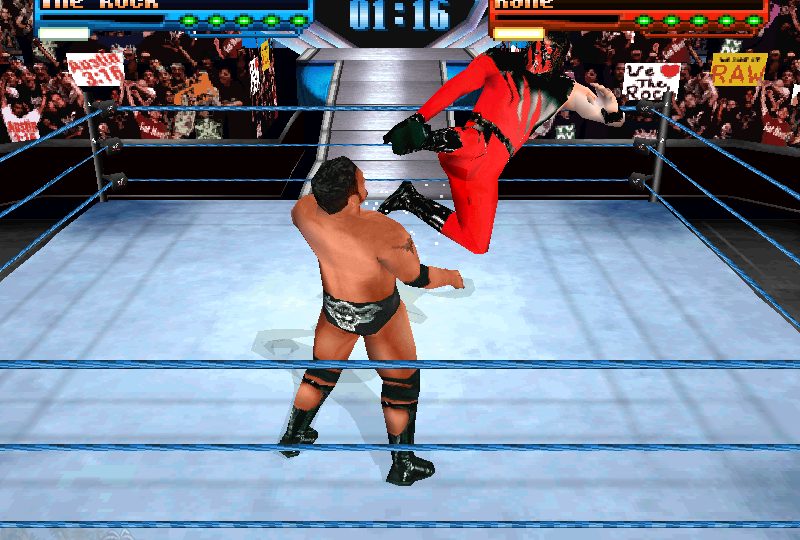 Rather than try to convert ports of the same game to different consoles, THQ would produce different games that focused on the chosen consoles strengths.

For the PlayStation, that game was the original SmackDown! Yuke’s were in charge of development. They cut their teeth in the wrestling game world with Japan’s NJPW: Toukon Retsuden series, known as Power Move Pro Wrestling in the west.

The first SmackDown once again capitalised on the PlayStations CD technology and was generally faster in pace than its N64 cousins, giving it more of an almost arcade feel.

SmackDown! was a hit and a sequel, Know Your Role, was released later that very same year, hitting store shelves in the same month as No Mercy and blowing everyone’s minds with features like Hell In A Cell and Ladder matches.

Yuke’s would release a WWE game every year, beginning with the SmackDown series, and evolving with each iteration, until becoming the Smackdown Vs Raw series, and finally ending their partnership with THQ with WWE 13, after the company went bankrupt and 2K took over.

Yuke’s would help produce a few more games with 2K, before finally handing over the reins fully after WWE 2K19, allowing 2K to s**t the bed with 2K20.

Ever since 2K stunk up the room with 2K20 and Battlegrounds, we have had a year off from mainstream wrestling games.

Hopefully, the break will ensure that WWE 2K22is a game of quality, but more excitingly, the AEW gamedeveloped by Yuke’s and No Mercy director Hideyuki “Geta” Iwashita can help capture some of the magic of the early 2000s.

It’s an exciting time for being a wrestling fan. Two major companies mean not only an improvement in in-ring quality but hopefully in video game quality too!