Kayfabe might be dead, but that doesn’t mean you have to rub our faces in it.

The mystique of wrestling is gone. In the age of social media, it seems almost impossible to keep for wrestlers to keep their on-screen portrayals separate from their private lives.

Unless you’re MJF of course.

I just got a Tesla.

If you drive a gas car you’re a bitch.

The death of kayfabe is not necessarily a bad thing. All it means is that over the last few decades fans now have a window to a world we didn’t have access to before and allowed companies to open up and be able to produce tell-all documentaries, biographies, and interviews.

It also allows talent to produce their own content, be it via vlogs, blogs, streams or however else they wish to connect with the fans and help get themselves over.

Then you have all the fun that comes with embracing the daft side.

Bouts between invisible men, epic compound battles with fireworks and dilapidated boats, and Jushin Thunder Liger leading a conga line of future legends such as Ciampa, Malaki Black, Sami Callihan, Cedric Alexander, Matt Riddle, Matanza, Brian Kendrick, Chuck Taylor, and Pete Dunne with thumbs up each others a**holes. Truly this is a golden age of wrestling. 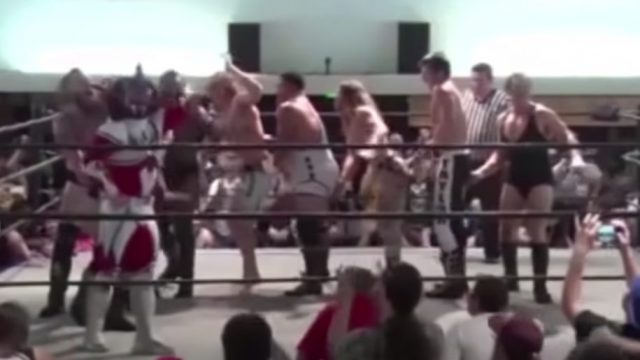 However, the ridiculous make-believe fun stuff works best when it’s kept to its own thing, and far away from “serious business” make-believe fun stuff. Half the fun of watching wrestling is the suspension of disbelief, which is incredibly hard to do if the performers take time to remind us it’s all pretend.

For example, take AEW Revolution 2022. Imagine if Moxley bested Brian Danielson by using the force to perform a chokeslam from the other side of the ring, or if CM Punk bested MJF in the middle of their bloody dog collar match by slamming him in the style of Joey Ryan.

So let’s investigate five times kayfabe was broken, and why it annoyed some of us rather than kept us entertained. 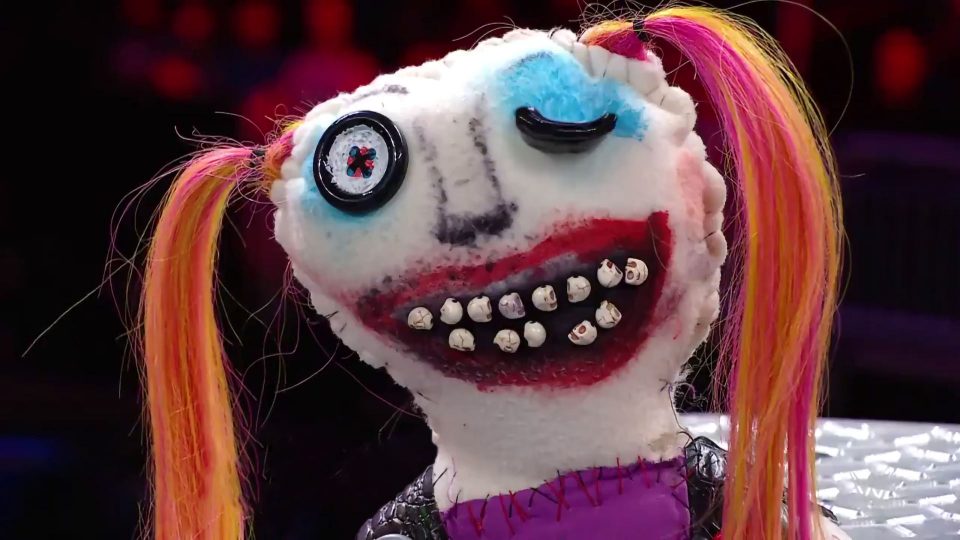 The spooky business has been going on in the WWE for years. However, whenever the Undertaker uses his power to send lightning bolts to the ring, or Bray Wyatt survives being set alight, it’s usually done using practical effects.

This gives us the option of believing in the supernatural, if that’s your thing, or stretching belief enough that it was all illusions, and that those who produced the effects and spots spent hours setting up their elaborate rouse like a cross between the Jigsaw Killer and David Copperfield.

Or, to put it more simply, MIND GAMES.

So when Doudrop faced Alexa Bliss on the August 9th, 2021 edition of Raw, it was a bit jarring when Alexa’s doll Lilly winked at Doudrop from the corner.

The effect wasn’t done practically using puppetry, which with a bit of time and effort was achievable, nor did Doudrop look away at the Titan-Tron for some pre-recorded madness.

Doudrop looked at the doll in the corner, and it winked at her complete with magical bling sound effects, and the best the commentators could say was “I would get out of there if I was you, Doudrop” then continued to announce the proceedings as if they didn’t witness proof that the devil is real and currently inhabiting a doll in the ring.

Most sane people would have taken off their headset, ran to the back screaming, phoned an exorcist, and never return to work again until the ring had received a good cleansing.

At the very least the WWE would be trying to make a bit of money selling their proof of undeniable magic to every news outlet known to man.

But no. Real sorcery took place, Let’s forget it, move on, and see if Elias has a song for us.

Warrior In The Mirror 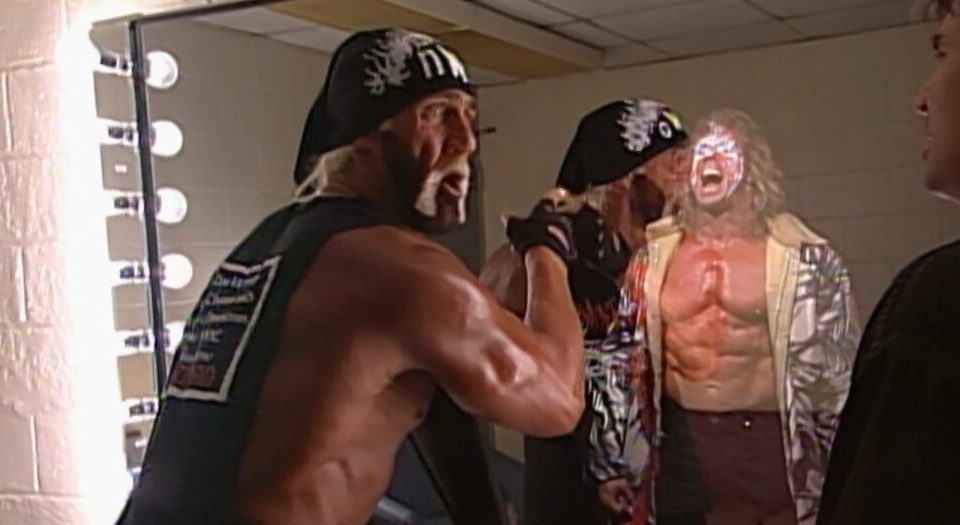 Ah, October, the perfect time for scary shenanigans. In 1998, The Ultimate Warrior returned (again), this time headed to WCW with one intention in mind.

He would use a smokescreen to give the illusion of transportation, appearing in and out of the ring when he chooses, and mirrors to stand there and awkwardly laugh whilst the Hulkster tried to go about his business.

Hogan seeing Warrior appear in his mirror wasn’t the problem. Stretching kayfabe we could say Warrior was standing in a secret compartment behind a two-way window, which is probably how the effect was achieved anyway.

The problem was Eric Bischoff coming into the room and selling it as if it was all in Hogan’s head. Despite the fact, we at home could see it, as could the ring announcers. So this gives us three options.

So what is the answer? Who knows. Who cares? It’s not like this angle ruined an otherwise brilliant piece of professional wrestling storytelling anyway. 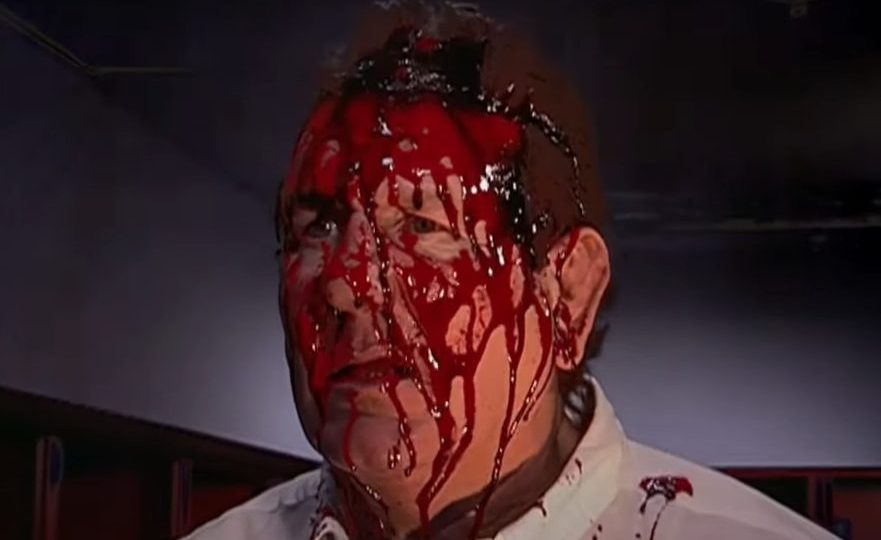 The Undertaker has had a legendary career, and nearly all of it has featured silly b*llocks, none more so than his feud with Randyand Bob Orton.

However, even in the depths of silliness, you can stretch kayfabe enough for some rationale.

Josh Mathews being possessed and speaking with Taker’s voice whilst interviewing Randy and Bob? Maybe Taker paid Mathew’s off and they pre-rehearsed some flawless dubbing using the same technology as Kai En Tai. INDEED!

Undertaker appearing in the mirror? Unlike Warrior, it seems Taker was just standing behind Randy and did a Batman when he turned around. Even Bob Orton had the good grace to wait for Taker to leave before asking Randy what was wrong. 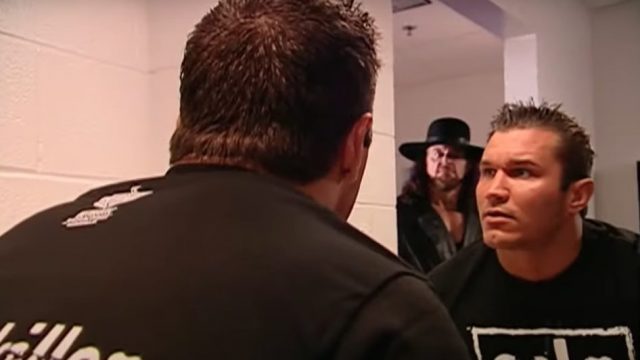 But Randy looking at Bob, Bob shaking and bleeding all over the place, only to suddenly appear to be fine, as if nothing happened? Naaaaaaah.

We know it wasn’t in Randy’s head because we, the people, and the commentators all saw it.

So the only logical kayfabe answer is that Undertaker sneaked in, poured strawberry syrup over Bob, and cleaned it off without him noticing, all in milliseconds. Even then, Randy never broke eye contact with Bob.

This must mean that much like The Flash, Undertaker is so fast he can perform and clean up silly b*llocks without people even noticing.

Of course, out of the realm of kayfabe, Bob Orton would eventually bleed on Undertaker for real even though Johnny Ace knew Bob he had Hepatitis C, which is almost as crazy as Taker sprinting at supersonic speeds. 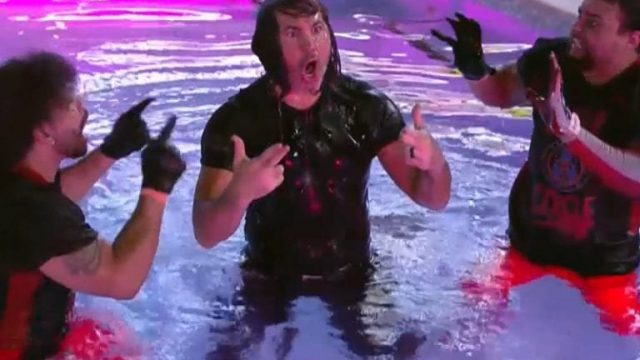 In the early days of AEW, The Elite was embroiled in an epic feud with The Inner Circle that was set to culminate in a brutal blood and guts match, AEW’s answer to War Games.

Then, Covid happened and a wild Matt Hardy appeared. 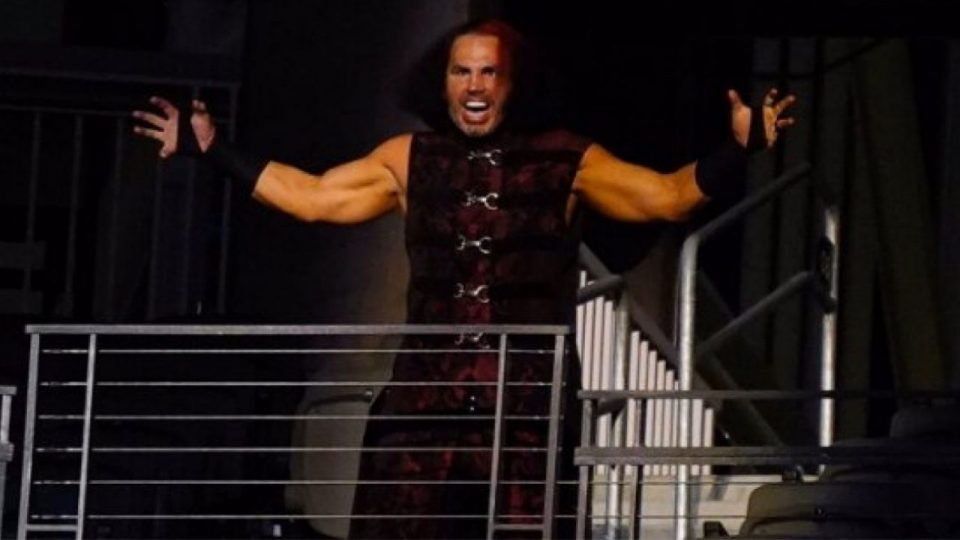 Now, Matt Hardy had spent the last few years making the “Cinematic” match type his own, with The Hardy compound battles becoming the stuff of legend.

One of the reasons it was easy to accept the brilliant nonsense is because it was kept away from more serious affairs. You could make the kayfabe excuse that these battles felt more like a TV show than pro wrestling, and were played off as performance art between all parties involved.

Even Hardy vs Wyatt ended with Wyatt falling into the lake of reincarnation and aligning himself with Hardy, so you could say the two were always in cahoots and wanted to reveal their alliance in an eccentric fashion. 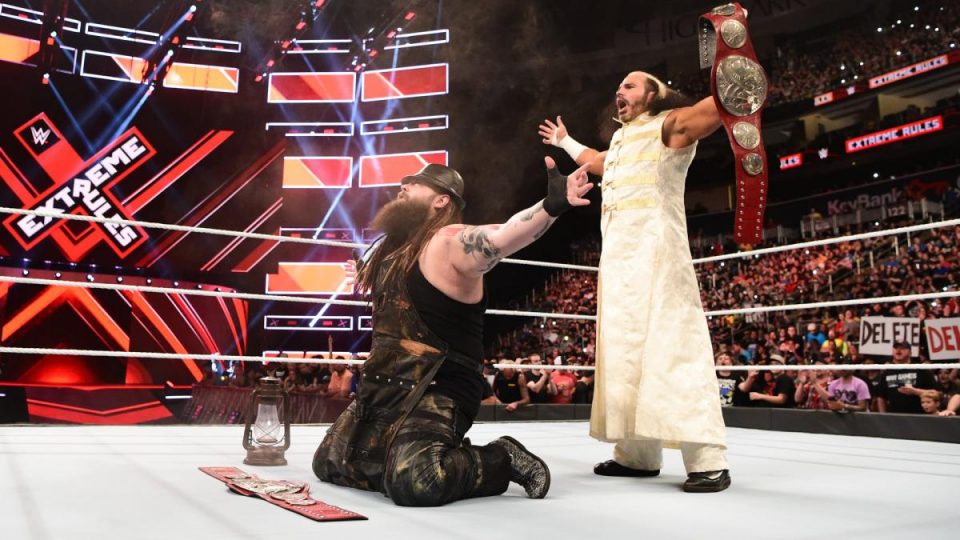 With the inaugural Blood And Guts called off until audiences were allowed back in attendance, The Elite took on The Inner Circle in the far more fun concept of the first Stadium Stampede match.

This battle was a far more jovial affair than what the potential cage battle would be, and exactly what the world needed for those dark times. So nonsense like the bar fights, golf cart chases, and field long suplex chains was not only tolerable for most fans, but highly entertaining as well.

One spot may have taken it too far. At one point, Santana and Ortiz Grabbed Matt Hardy and tried to drown him in the TIAA Bank Field Stadiums pool. Each time he went in, Hardy would gurn at an underwater camera, then pop back up as another one of his many personas. 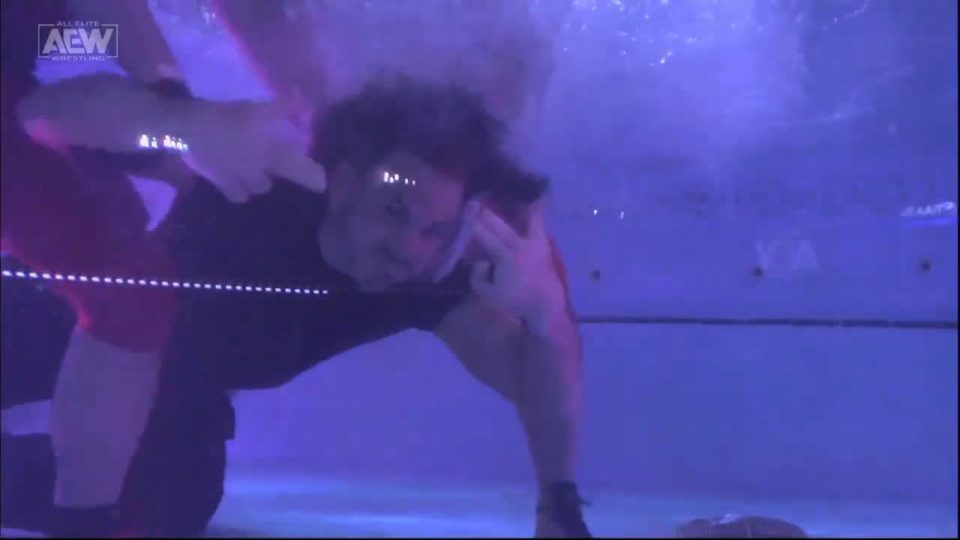 This absolutely destroyed kayfabe, which would be fine for a comedy feud, but after months of playing it straight, it pretty much killed any salvageable height between The Elite and The Inner Circle. This hate-filled gang war suddenly became a group of buddies just having a laugh.

The Forklift Cam At Halftime Heat 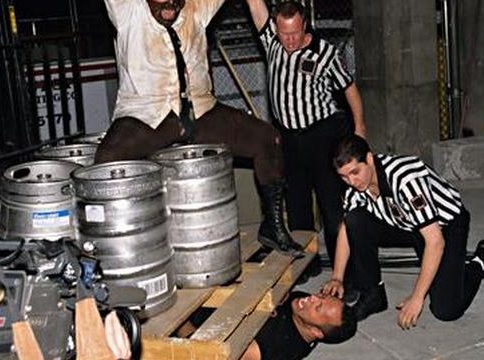 Twenty years before anyone stampeded at a stadium, there was Halftime Heat, a special empty arena match that took place during the 1999 Super Bowl.

The Rock and Mankind were in the midst of a legendarily brutal feud for the WWE Championship coming of THAT I Quit Match from the 99 Rumble.

You know, the one where Mick took all those unprotected chair shots to the head and made his children and wife cry, as documented in the film Beyond The Mat.

Halftime Heat was nowhere near as uncomfortable to watch as their prior bout, but the finish would still make viewers wince albeit for different reasons.

The match ended with Mick lowering a forklift pallet on The Rock, effectively pinning him, then clambering on top for the 1-2-3.

No, this moment hasn’t made the list for the dubious ruling that Mankind could pin The Rock without touching him, rather more so than how the moment was filmed.

Mankind would scream “DOWN! DOWN!” from the forklift controls, only to cut to the POV of the forklift pallet coming down on The Rock.

Was a cameraman standing on top of the pallet to film this extreme close-up? Well no, as we then cut to The Rock’s POV of the pallet coming down on top without a camera in sight.

But never mind that, how did we get The Rock’s POV? Was he wearing special camera contacts?

THEN, we cut back to the pallet POV. Obviously, these edits were used as a way to show the forklift coming down without actually crushing The Rock, but instead, it crushed all belief in wrestling in general.

Maybe we’re just being silly. Heck, even the foundations of wrestling include the powers to make someone run and bounce back against ropes without stopping themselves, or to be dropped on ones head continuously without even a bruise.

Maybe we should let these moments slide and accept that wrestling is just good fun, and maybe we should just go with the flow and stop safeguarding an ancient carnival con act that was all a rouse to make some money off some marks. 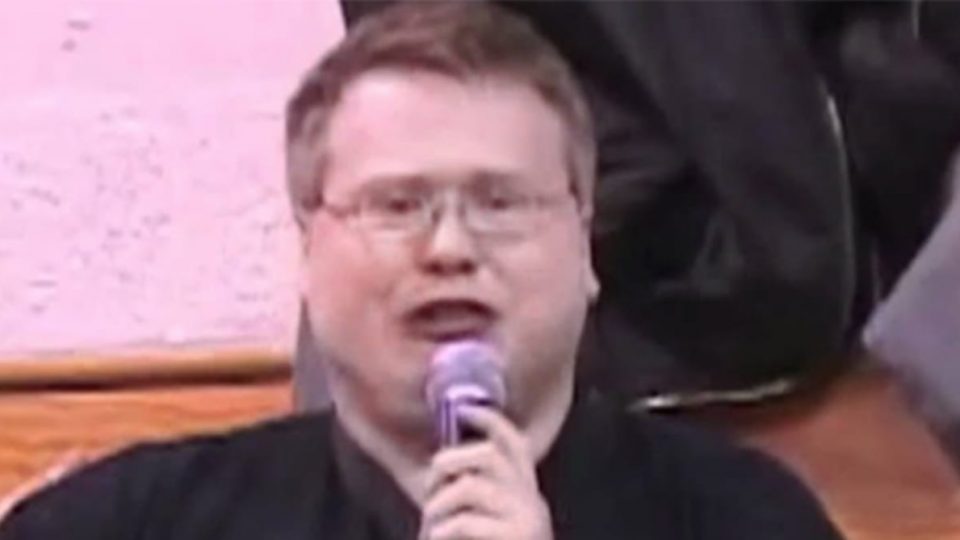 Or maybe, just maybe, IT’S STILL REAL TO US, DAMMIT!