Ostensibly titled “Who’ll Win Between The Elite And The Dark Order?”, the AEW World Trios Championships look set to begin with a tumultuous series of events.

The separation of Adam Cole, Bobby Fish, and Kyle O’Reilly from Matt and Nick Jackson created a rift in The Undisputed Elite that, at first, looked set to be patched, shockingly, by ‘Hangman’ Adam Page. The one-time AEW World Champion saved the Jackson brothers from Cole, Fish, and O’Reilly rescuing his former friends without explicitly saying, ‘The Hung Bucks are back, BayBay’.

Because they’re not. Page is supporting his Dark Order brethren in the tournament, leaving the Bucks without a partner for the impending tournament. That looks set to be filled by Kenny Omega.

This makes them an obvious choice to be the first AEW World Trios Champions. Three company originals, all of whom are AEW EVPs, and a trio with established success as Trios Champions through their ties to the NEVER Openweight Six-Man Tag Team Championships. It would be an acceptable option for the first set of champions, but AEW’s trios division has depth; they’re not the only straightforward option… 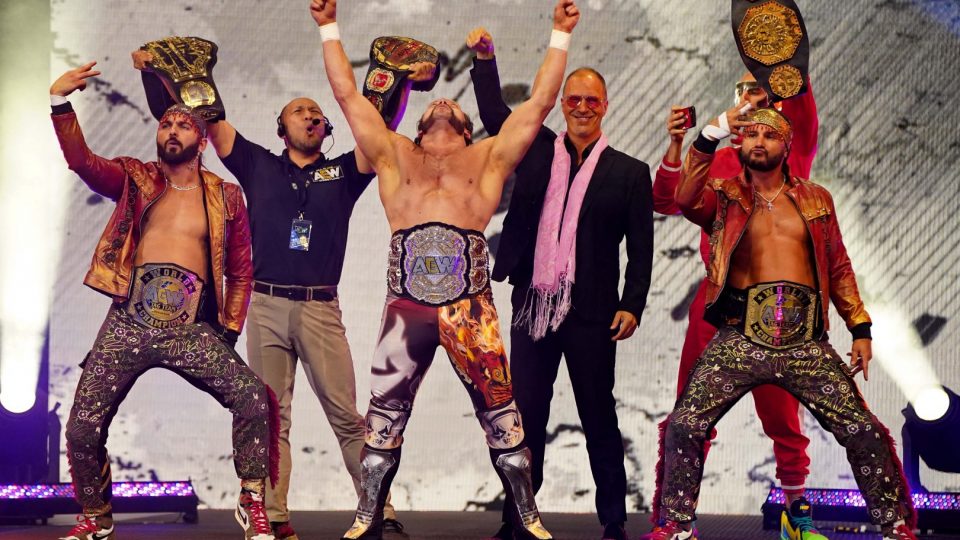 …however, they are the best option.

Although a couple of teases have hinted at The Young Bucks turning to the good side, they came before Adam Page turned down their offer to reunite. This would have offered a superlative change for the brothers’ career trajectory, having played heels for over a year but to arrive at the perfect All Out scenario, a heel Elite is the right option, presuming Kenny Omega is the third man.

It may seem nuts having Omega return as part of the World Trios Championships tournament as he was the leading face of AEW. Kenny’s return coming in any other scenario than a headline attraction seems otherworldly, given his body of work as World Champion. Tony Khan, however, has gone on record to say how he didn’t want to go ahead with the tournament unless ‘The Cleaner’ was ready, so Omega is going to have a major deciding factor either way (H/T to Wrestle Purists):

“Trios title belts have been made so now it’s just a matter of when they pull the trigger. Tony Khan was asked about making trios titles and gave the indication a few months ago what it was happening, but that they didn’t want to do the tournament until Kenny Omega was back.”

Being a featured act on AEW throughout the latter half of 2021 as Adam Page battled Kenny Omega for the World Championship offered hope for a prolonged Dark Order push. Unfortunately, aside from appearing alongside the then-champion in his victory speech post-Full Gear, the stable hasn’t tasted the same levels of success. Now contained almost exclusively to AEW’s YouTube programming and with numerous members having left, it’s the right time to reset The Dark Order.

To be successful in pro wrestling varies from promotion to promotion but in AEW, it means highlighting your strong points. The Dark Order used to be full of them. They haven’t lost any; they just haven’t been awarded the opportunity to showcase them until this tournament.

Only Evil Uno, Alex Reynolds, John Silver, and Preston Vance remain, alongside Brodie ‘-1’ Huber Jr., making Uno, Reynolds, and Silver the likeliest trio for the tournament. A curveball option would see Adam Page inserted into the match, though this runs the risk of taking away all of The Dark Order’s glory.

The House of Black 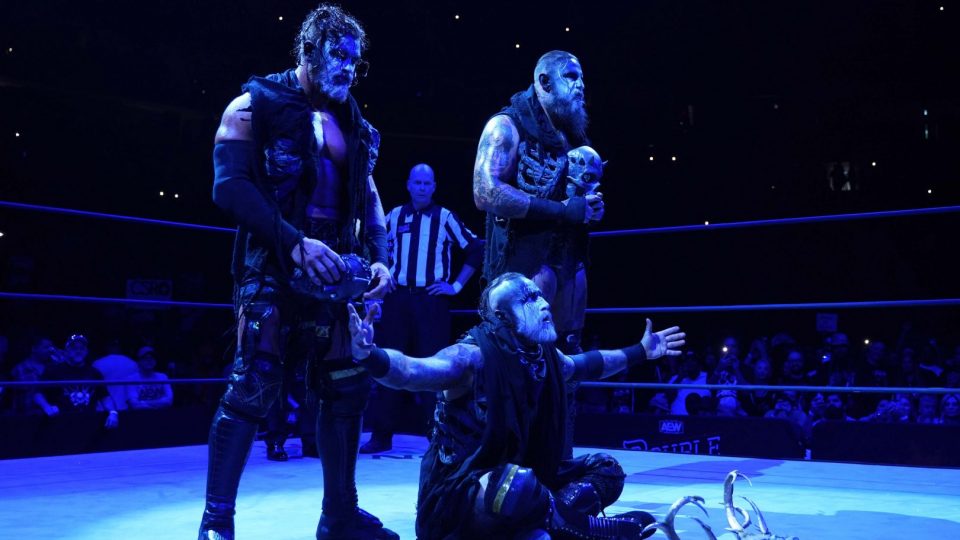 AEW’s presentation of The House of Black is sublime. Together, Malakai Black, Brody King, Buddy Matthews, and Julia Hart are booked positively, producing work unlike anything else, and turning the traditionally tiresome spooky group concept into a must-see, bloodthirsty series of segments and matches. Particularly through Brody King’s output of in-ring content, they’re consistently one of the hottest aspects of AEW programming.

As far as this tournament is concerned, however, they’re an afterthought. AEW’s trios division is so stacked that, somehow, the combination of Black, King, and Matthews is largely going unnoticed as the potential debut champions. Surprises are a given with AEW, even more so on pay-per-view nights, so their victory isn’t out of the question; it’s simply a matter of if AEW could perfectly pull off the positioning of the group as World Trios Champions without damaging their reputation. 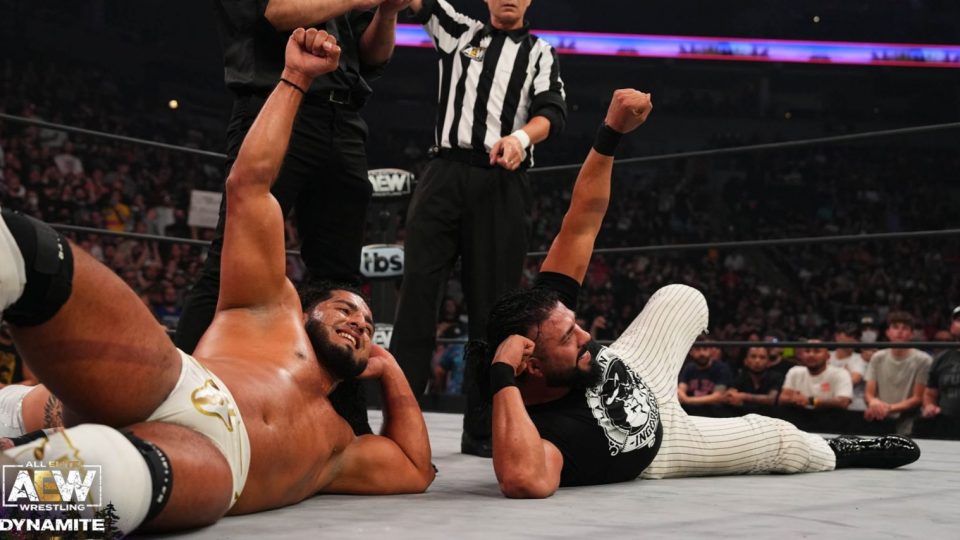 AEW isn’t struggling for trios. They had their reasons for including The United Empire, The Trustbusters, and La Faccion Ingobernable in the inaugural tournament, and that’s to both protect their established groups, and to vary the tournament. By including the latter trio, AEW is instantaneously creating this aura around the World Trios Championships that harks back peak-PWG multi-man frenzies, a style that Andrade El Idolo, RUSH, and Dragon Lee can keep up for as long as need be.

Again, it would be weird if they were AEW’s first choice to lift the championships. To begin the long-awaited championships on the right note though, this is perhaps what is needed. The trios titles are the eighth active championship on offer in AEW, with the majority of the six titles before it beginning with a somewhat obvious champion. Ditching that stereotype this time around would create buzz for not only the titles, but the division as a whole. 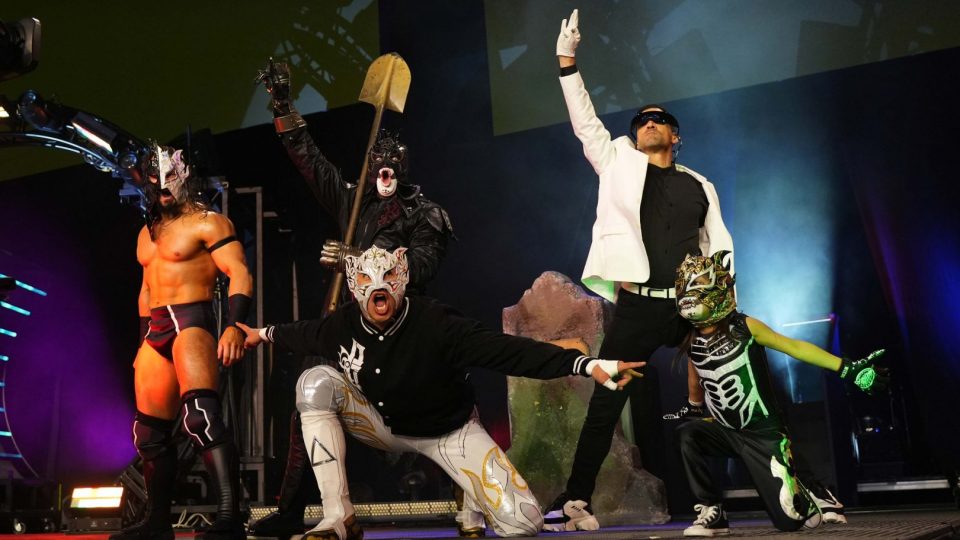 The pandemic halted the initial success of Death Triangle, with PAC unable to travel to America to team with The Lucha Bros for months, just two weeks after they came together. This is an issue they haven’t quite rebounded from. Something feels off between the alliance; not to do with the wrestlers themselves, but rather the presentation and reception of them. Something extra is needed to fill the void.

Death Triangle can be a formidable trio if presented as such. They’re both deadly killers and flashy artists of the sky, a combination difficult to find anywhere, but AEW has three examples all within the same contingent. They may not be the obvious champions to kickstart the legacy of the AEW World Trios Championships, but going down that route could be the move Tony Khan needs to make.

The AEW World Trios Championships tournament kicks off on Wednesday, 17 August with La Faccion Ingobernable vs. The Young Bucks and a mystery partner, all leading to the finals at All Out on Sunday, 4 September.