As we look to see who Seth Rollins’ mystery opponent is at WrestleMania, let us look back at five moments that saw the return of some favourite superstars.

We are entering the biggest weekend of the year on the sports entertainment calendar, and WWE superstars are no doubt wondering how to make their mark and create a “WrestleMania moment.”

One sure-fire way to create an impactful memory is with an epic return, and it seems that’s what the WWE has in store for Seth Rollins at this year’s event.

Will we see Cody Rhodes make his spectacular return to the WWE Universe? Will John Cena grace us with his presence for the first time since SummerSlam? Will Essa Ríos moonsault his way back into our hearts? All we can do is speculate.

Or maybe, there will be a shock even we fans couldn’t predict. Who knows. Well, WWE management probably knows at this point but even so.

One thing we do know for sure is that a well-done WWE return has the power to excite the crowd and go down in history, so here are five examples that did it expertly.

Or some not quite so expertly, but epic nonetheless, like our first entry… 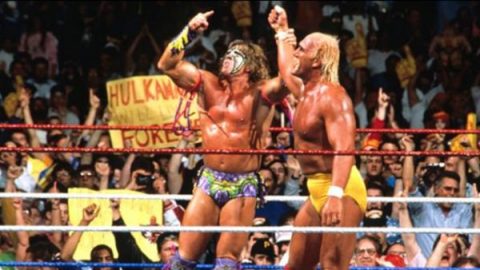 At the Royal Rumble in 1992, Sid Justice eliminated Hogan fair and square, only for Hogan to then pull justice out in a true heelish move. Except, it wasn’t a heel move, because 92 Hogan brother.

So the two would go on to battle at WrestleMania 8. Hogan would drop the massive leg across Sid, 1-2- kick out! In a true babyface move, Justice kicked out of the immortal one’s finisher! Except it wasn’t a babyface move, and not just because of ’92 Hogan, brother.

Papa Shango was supposed to interfere, but poor old Charles Wright missed his cue and despite Harvey Wippleman trying in earnest to save the spot, the match ending had to be slightly changed on the fly.

Papa Shango then made his way with trepidation down to ringside and eventually we got the two on one beat down on Hogan as intended. All hope was lost for Hogan until…

That’s supposed to be the Warriors theme song by way, not producer Kevin Dunn getting himself over on a mic backstage, in case anyone was wondering.

Ultimate Warrior may not be praised for much, but the neon-clad barbarian sure knew how to make an entrance. As he sprinted to the ring for the first time since the previous year’s SummerSlam the crowd went banana.

Warrior Saved Hogan and the two posed triumphantly, creating one of the Warrior’s most fondly remembered moments.

Sure it was a little botchy, but that’s kind of a Hellwig tradition. 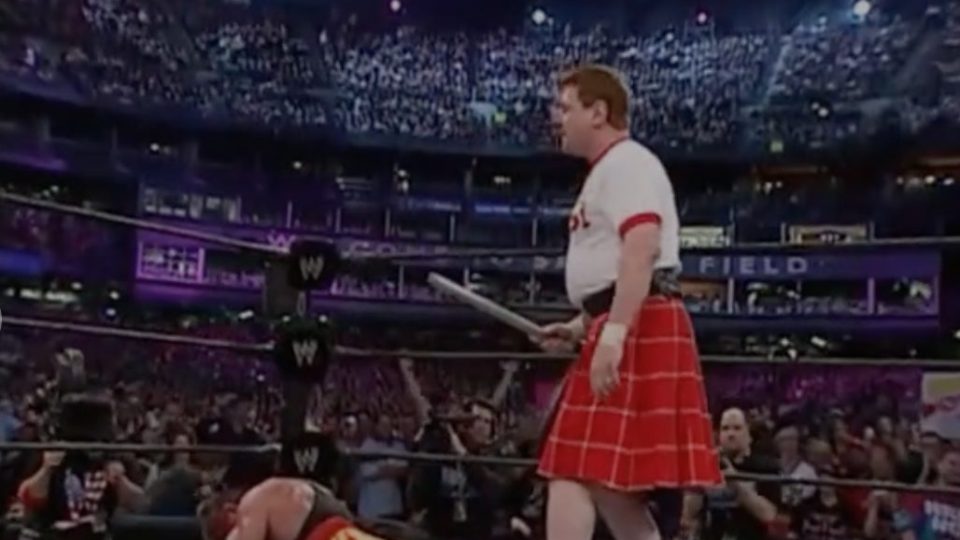 Roddy Piper is no stranger to a WrestleMania return. At WrestleMania V He brought back Piper’s Pit and hosed down a smoking Morton Downey Jr with a fire extinguisher.

Then at WrestleMania X and XI, he returned for special guest ref roles, first for Bret Hart vs Yokozuna, then the next year for Bret vs Bob Backland in a submission match.

But the one we chose for this list was far more shocking and dastardly.

On paper Hogan Vs McMahon could have gone one of two ways. The epic conclusion to a storyline 20 years in the making or the awkward sight of two older gentlemen bleeding and flopping about all over each other. Lucky for us, it was a bit of both.

What the two pioneers of sports entertainment lacked in athletic ability they made up for in pure storytelling.

Piper’s cameo came about when both men were down. He entered the ring in disguise for some unknown reason, as he immediately removed it, gave Vince a little kick in the ass, picked up a steel pipe from the ground, spat at his former boss before…turning around and clocking Hogan in the head!

In a match story that was pretty much about the history of the WWF, it was quite fitting for this piece of Hogan’s past to come back to haunt him.

Of course, Hogan would go on to win the battle, because ’03 Hogan, brother. 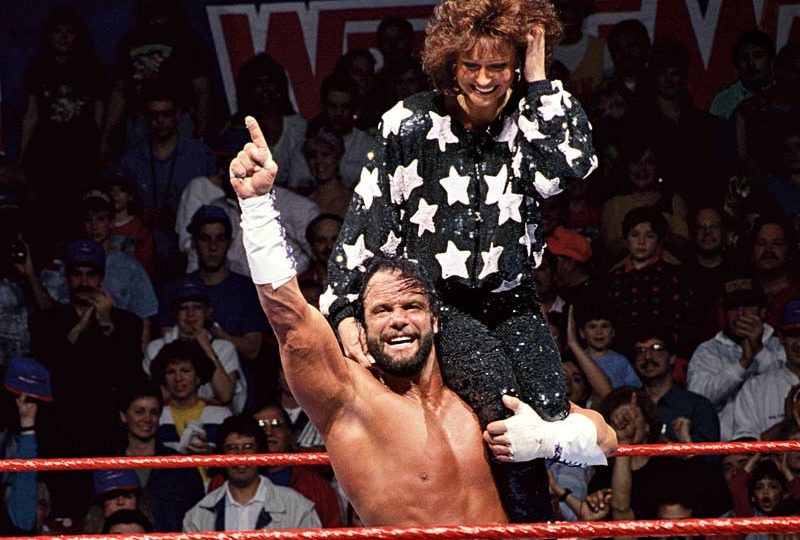 Elizabeth and Randy were the WWF’s golden couple, beloved by fans, and nothing could ever come between them…

After forming a tag team, Savage would become more and more paranoid over Elizabeth’s relationship with the Hulkster until the Mega Powers exploded at WrestleMania V.

Randy would turn to the dark side, become the “Macho King” and replaced Elizabeth with the villainous Sensational Sherri.

The dastardly duo would even face Dusty Rhodes and Sapphire in the first mixed tag match in WrestleMania history the following year, with Elizabeth in their opponent’s corner.

However, the year after THAT, Savage would lose in a retirement match to the Ultimate Warrior. No longer finding a use for the Slim Jim fanatic, Sherri would beat down the defeated Randy, until Elizabeth, who was sitting in the crowd, would make her way in for the save!

Randy and Elizabeth were reunited, and the 16,000 in attendance Los Angeles Memorial Sports Centre went crazy! The two would go on to be married at that year’s SummerSlam. Who doesn’t love a happy ending?

Well, reality doesn’t, as the two would actually get divorced behind the scenes that same year, but the reality is overrated anyway.

At the Survivor Series 2003, following interference in his match against Mr. McMahon from Kane, The Undertaker was buried alive! Again.

Foolish Kane. Had he not seen what happens when you lock Undertaker in a coffin or bury him alive? Normally he comes back more powerful than ever!

But it was different this time. This wasn’t the beloved goth wizard taker, but the American Badass, who had no lighting shooting or teleportation superpowers.

In fact, the Undertaker’s biggest sin was “becoming one of you!” as Kane would tell the crowd at a sick memorial he set up for his kayfabe brother.

Then the warnings started. Purple lights, gonging bells, lightning bolts, levitating rings…The Undertaker was letting Kane know that he was coming for him at WrestleMania XX and that the past was literally coming to haunt him.

Following a brilliant WrestleMania video package up there with Austin and Rock’s “My Way” and Daniel Bryan’s “Monster,” Kane stood in the ring awaiting The Deadman’s return.

But first, out came Paul Bearer! Kane’s kayfabe father hadn’t been seen on WWE TV for years, and after telling the future Mayor of Knox County that “You’re no son of mine!” He turned the stage and the druids behind him.

The familiar sounds of the graveyard symphony echoed throughout Madison Square Garden and the cowboy-hatted, trench coat-wearing silhouette of The Phenom appeared.

Many fans theorized this would be one final nostalgia run for The Undertaker before retiring. What we got was over another decade of destruction, featuring arguably some of The Deadman’s finest in-ring work.

The Hardy Boyz Complete The Expedition Of Gold – WrestleMania 33 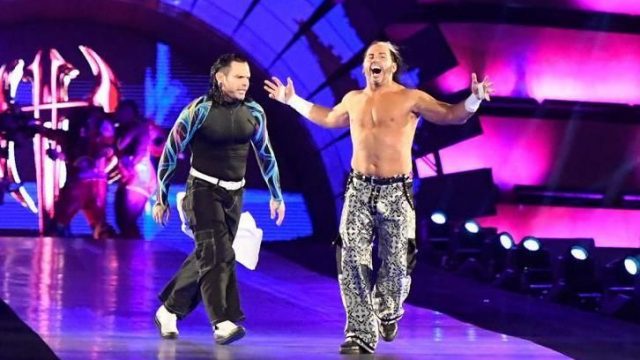 Since leaving the WWE in 2010, The Hardyzenjoyed a successful run, inventing new interesting characters such as their “broken” personas, and innovating the cinematic comedy match.

During their expedition of gold, The Hardyz would face off against The Young Bucks at ROH’s Supercard Of Honour XI in a gruelling ladder match the night before WrestleMania 33, making their now rumoured return to WWE seem more unlikely.

In the age of digital media where surprises are a lot harder to hide, the comeback was handled expertly. New Day, who were the hosts of that year’s Mania, weren’t actually booked in a match themselves.

So before the Gallows & Anderson, Cesaro & Sheamus, Big Cass & Enzo Amore (it was a weak era for tag team names) triple threat match for the Raw tag team titles, the hosts made their way out to declare a fourth team had been added to the match, but who could it be?

After a split second thought that New Day had booked themselves into the bout, The Hardyz old theme hit, and the Camping World Stadium became unglued.

The Hardyz returned and concluded their expedition of gold by winning the belts, making them the holders of the Impact, ROH, and WWE titles all in one weekend, an amazing feat that will likely never be repeated.