The double ring cage match called War Games will be dusted off and make its long-awaited debut on main roster WWE television at the forthcoming Survivor Series event.

Conceived by the late, Dusty Rhodes in 1987, War Games was designed as the ultimate feud ender, with lashings of blood and violence guaranteed.

A fixture of the NWA and later, WCW, War Games was one of the most anticipated matches of the year. 30 years after its conception, War Games was unearthed by WWE’s NXT brand, where it also became an annual tradition. 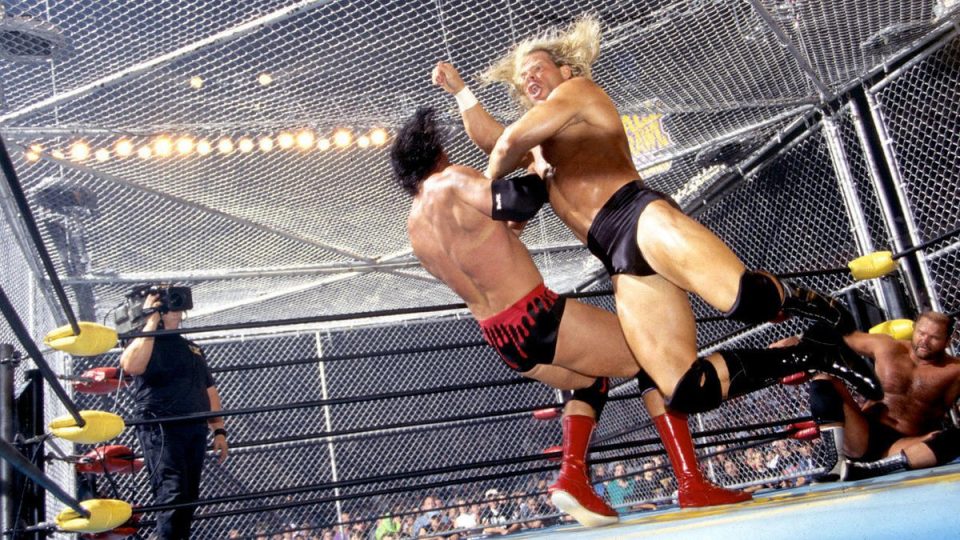 The nWo storyline was only a few months old in September 1996 and the live crowd were molten hot for everything.

The story of the bout was whose side was Sting on? The nWo had claimed ‘The Stinger’ had betrayed WCW and was a fully signed up member of the Order. In order to keep fans guessing, the wrestlers stayed in the back until it was time for them to enter the ring. When Sting apparently came out as a member of the nWo, the fans lost their minds.

However, it was a ruse. The real Sting came out as the final member of Team WCW and laid out the nWo before abandoning the match, in protest to his team-mates not trusting him. This would lay the groundwork for ‘The Icon’s’ rebirth as The Crow Sting.

With only three participants against the four-man strong nWo, WCW fell to defeat, when Luger submitted to Hulk Hogan and the fake Sting.

A very strong War Games, with great storyline development and pacy action, this was an excellent effort from all involved.

#4 The Fabulous Freebirds & The Samoan Swat Team vs. The Midnight Express, The Road Warriors & Steve Williams – The Great American Bash 1989

The 1989 Great American Bash delivered a full-on War Games headliner. In a truly nutty opening, The Samoan Swat Team spent the pre-match battering each other before they turned their attention to their opponents.

An incredibly heated match, with super stiff brawling, the end saw Jimmy Garvin save Terry Gordy from a Doomsday Device, only to be smashed by a clothesline himself. It was Garvin who submitted to lose for his team.

By this point, WCW had nailed a successful formula for these War Games matches. However, this one was lacking slightly with the lack of a real blood feud, which took away from the bout slightly.

However, there could be no complaint about the action which was everything one could ask from War Games and more. 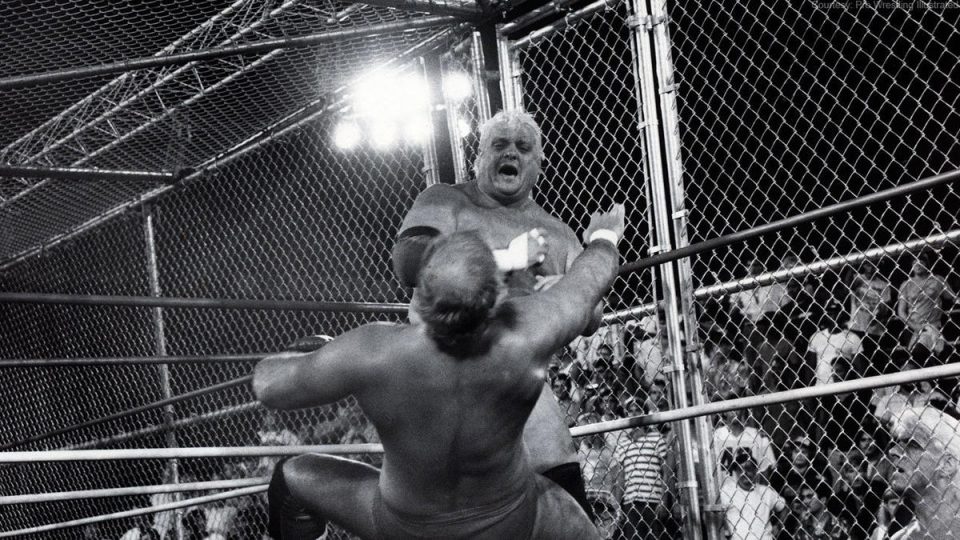 In 1987, the NWA held several events during a Great American Bash tour which saw two War Games battles during July. However, it was the bout held on July 31, 1987 that edges out its predecessor as the superior contest.

The previous battle had seen The Four Horsemen’s manager, JJ Dillon submit, causing his team to lose. The Horsemen for this return bout drafted in The War Machine, the future Big Boss Man to tip the odds in their favour.

Interestingly, it was The War Machine who ended up submitting in this rematch to earn the faces the win for the second time. The finish saw War Machine on the receiving end of numerous spikes to the face as Paul Ellering provided his charges with a gruesome spiked wristband.

Chaotic, bloody and incredibly violent, this War Games brawl was ground-breaking and unlike anything witnessed before in pro-wrestling.

A truly seminal match and an excellent blueprint for all future War Games matches. 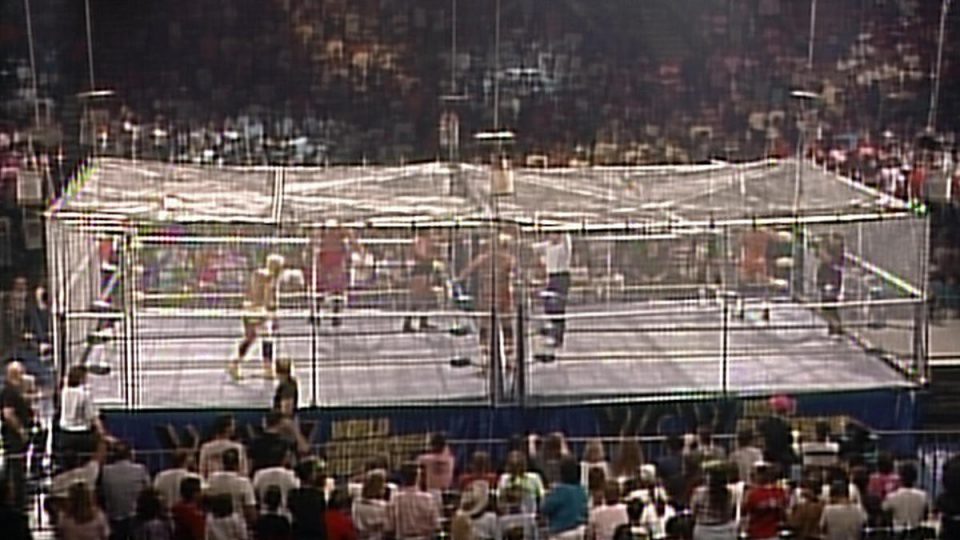 The War Games bout held at WrestleWar 1991 is best remembered for Sid Vicious almost killing Brian Pillman at the conclusion of the contest. However, that detracts from the fact for the preceding 20 minutes of this pulsating match-up.

Several feuds collided inside the unforgiving structure, the most notable of which was Sting versus The Four Horsemen.

The aforementioned finish came when Vicious powerbombed Pillman directly on his head. Not content with maiming his opponent, Vicious then nailed Pillman with another powerbomb.

The referees mercifully called the match there, rather than waiting for the traditional submission.

Intense and heated with plenty of wild brawling, this was a terrific match-up and one of the very best War Games matches. 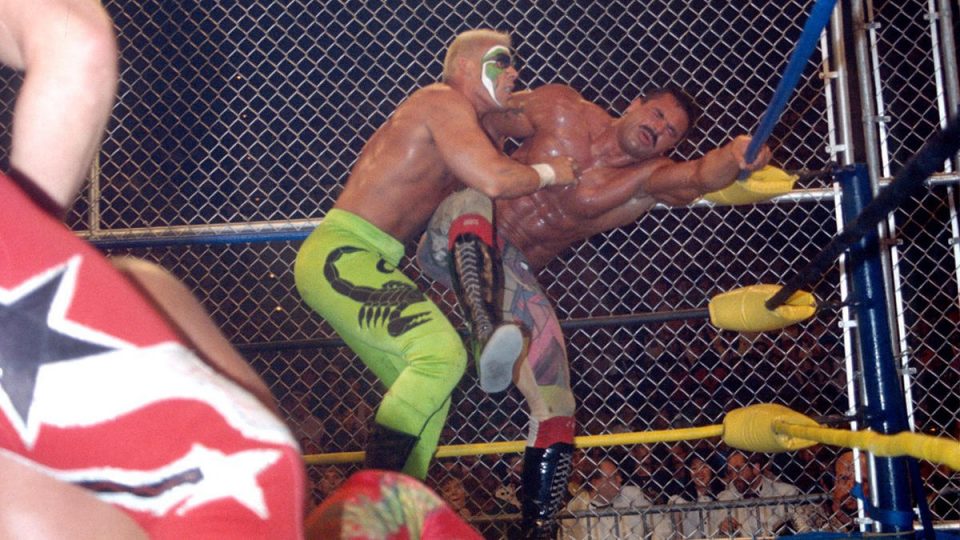 There is very little question as to which bout is the greatest War Games of them all. It’s abundantly clear as to why.

Everything fell into place for the War Games battle held at the 1992 edition of Wrestle War. Sting’s Squadron and The Dangerous Alliance had been feuding for months and their discord finally reached boiling point inside the double ringed cage.

This super-heated, bloody and intense brawl was one of the finest bouts of the decade. Full of logical storytelling and lashings of claret, this was everything any observer could want from War Games.

Sting’s team won when Bobby Eaton submitted to Sting’s armbar. That left Eaton on the outs with the rest of The Dangerous Alliance who saw him as the weak link.

Unfortunately, Bill Watts took over as WCW Head Booker shortly after this show and disbanded The Dangerous Alliance which robbed the company of more electric feuds and matches.

You can watch all these classic War Games matches exclusively on the WWE Network.