When any wrestler begins their career, there is little doubt that their aim is to reach the top of the business. To get there, they need to prove themselves by becoming champions in their chosen promotions.

As the physical signifier of the best of the best, the championship belts themselves need to look the part, both prestigious and elegant. In this feature, we will look at five of the best belt designs that have been used in professional wrestling, and delve into some of the histories behind them. 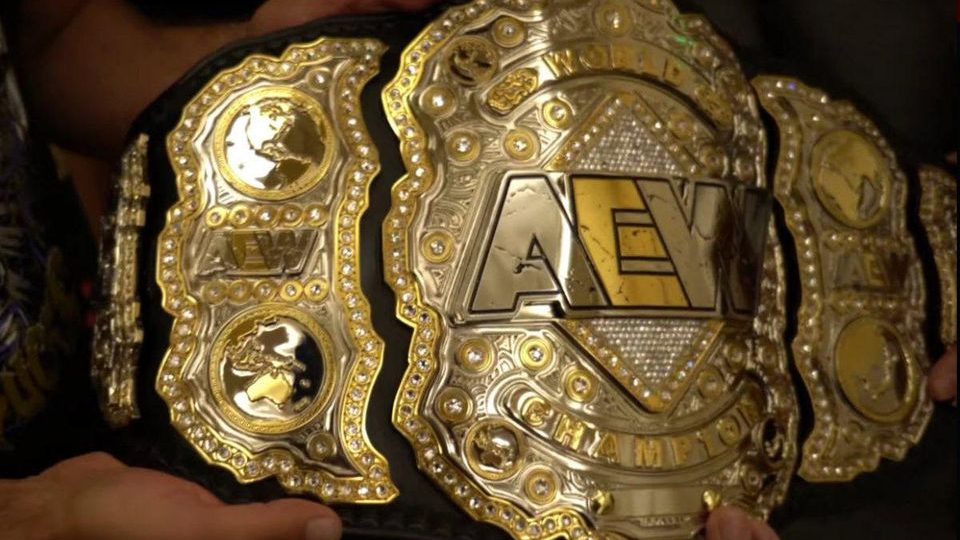 The AEW World Championship is the newest belt on this list and also the only one still active today. From the beginning, AEW has had a ‘go big or go home’ mentality that saw the company launch with some of the hottest wrestlers in the world on their roster, sell-out arena shows, and a major TV deal with TNT already in the bag. The championship unveiled at their inaugural event in 2019, Double or Nothing, by the ‘Excellence of Execution’ Bret Hart was another reminder of the company’s ambition. The belt is big, gold and silver, and covered in gemstones, with the AEW logo proudly sitting in the middle of the centre plate and the side plates. Unlike most championship belts, the side plates slot into each other and the centre plate, giving a feel of one whole design separated only so that it can fit around the champ’s waist. There are hints of an homage to other belts in this list, specifically the ‘Big Gold’ belt in its size and shape, and the IWGP Heavyweight Championship in the way different elements rise above the base plate.

The first champion to hold the belt was decided in August 2019, when the veteran Chris Jericho defeated up and comer Hangman Page to capture the gold. Flanked by his new group, the Inner Circle, Jericho successfully held the belt for 182 days, in the process defeating Cody Rhodes in a match which stipulated Rhodes would never be able to fight for the belt again if he lost. The ‘Demo God’ lost the belt to Jon Moxley.

Moxley took his time at the top in a more violent direction, defending the title in No Holds Barred, No Disqualification, and I Quit matches. During his 277-day reign, he defeated the likes of Inner Circle member Jake Hager, Lance Archer, and one-time friend Eddie Kingston. 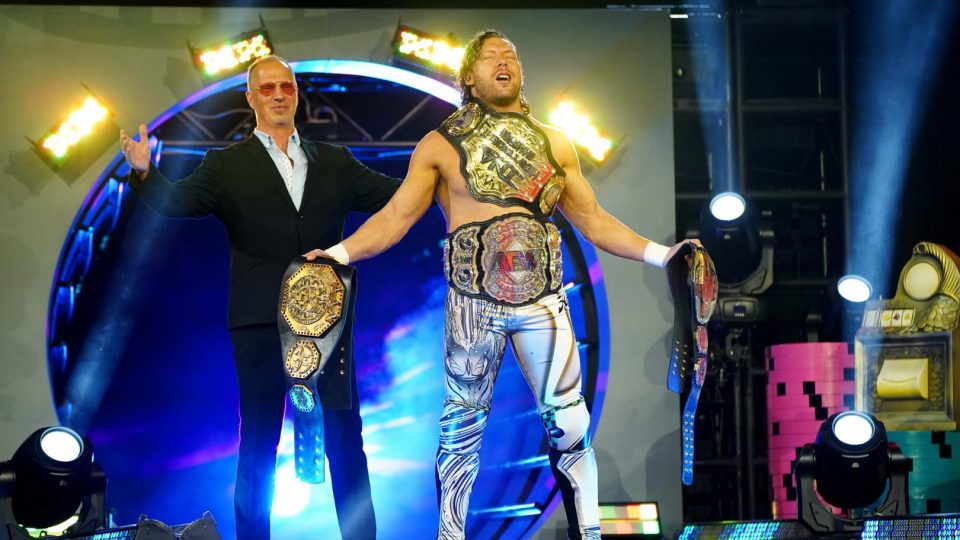 The current title-holder, Kenny Omega, won the championship from Moxley with help from his friend and former IMPACT Wrestling Executive Vice President Don Callis. Omega already held the Mexican promotion AAA’s Mega Championship, and soon added the IMPACT World Championship to his accolades with help from Callis and Elite members Doc Gallows, Karl Anderson, and the Young Bucks. Omega has defended all three championships across the different promotions, notably in AEW winning a rematch against Moxley in an Exploding Barbed Wire Deathmatch, and shows no signs of slowing down as he looks to surpass Moxley’s reign. 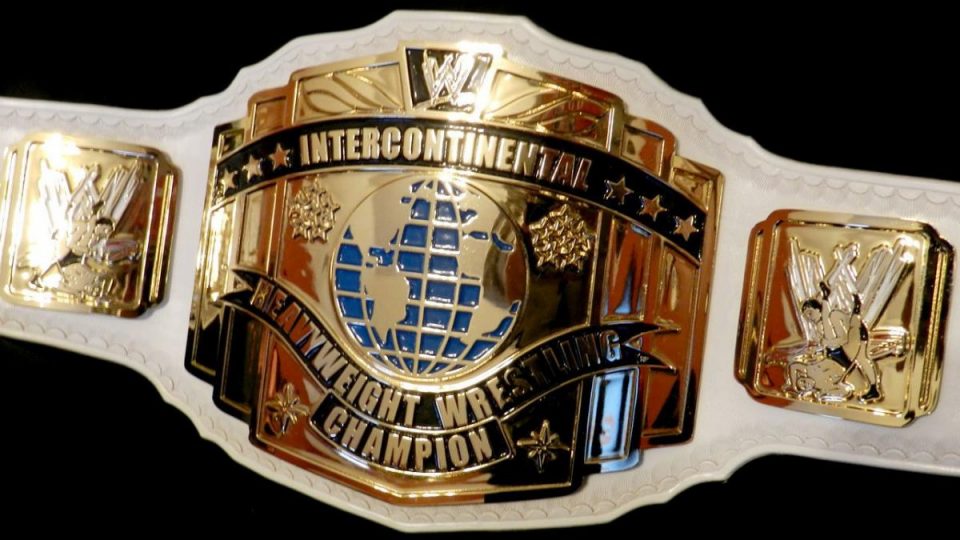 On October 2nd, 2011, the WWE Intercontinental Champion, Cody Rhodes, debuted an updated version of the Intercontinental Championship belt of the 1980s. The new design featured the WWE ‘scratch’ logo on all four plates and a chunky but simple centre plate with stepped sides and a blue globe in the middle. Finished off with a white leather strap, the belt had a clean and elegant style to it than put in the top tier of wrestling championship belts.

By bringing in this belt, Cody brought back memories of the great Intercontinental Champions of yesteryear who built its reputation as the ‘workhorse titles. Names such as ‘Mr Perfect’ Curt Hennig, ‘Macho Man’ Randy Savage, Razor Ramon, Bret Hart, and Cody’s own brother, Goldust’s consistently great matches elevated the belt to be the equal of the WWF Championship. Cody Rhodes’ decision to bring this lineage back to the fore set the tone for his own championship run which lasted for 234 days and included a feud with his former mentor Randy Orton and title matches against the likes of Sheamus, Booker T, Big Show, and John Morrison. 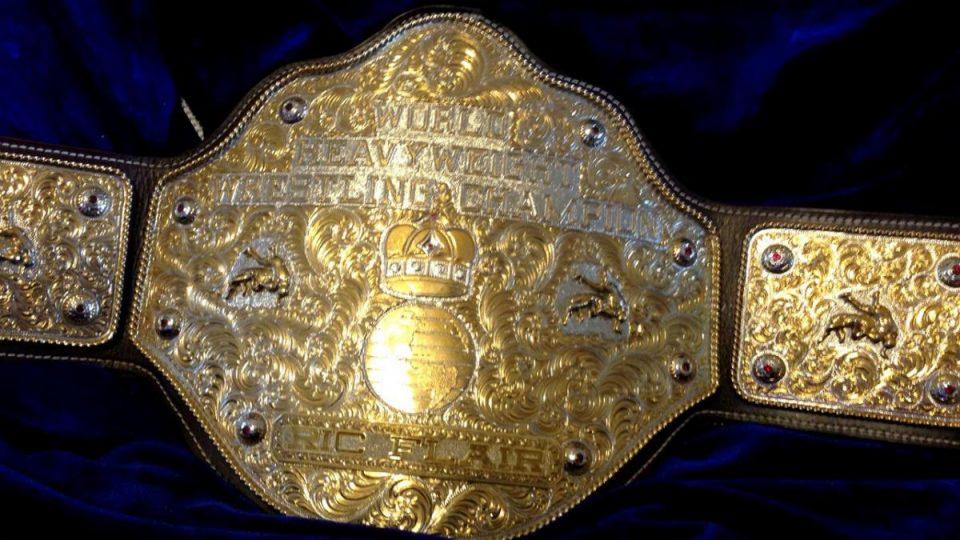 The belt with the longest tenure on this list, the NWA and then WCW World Heavyweight Championship is better known by fans as the ‘Big Gold’ belt. The belt consisted of two side plates and a large centre plate. All three were intricately hand-etched with overlapping feather designs and had red gemstones set into the corners of each. Uniquely for a wrestling belt, there was no company logo found on any of the plates. While this was reportedly due to a dispute over the cost of the belt, it does add to its prestige, giving it an air of being the only World Heavyweight Championship worth fighting for.

The belt was first held by the ‘Nature Boy’ Ric Flair, a man who would also become synonymous with it throughout his illustrious career. Flair debuted the championship in February 1986 when he was in the midst of a momentous 793-day fourth reign as the NWA World Heavyweight Champion. It would also go around the waists of many other legends, including Dusty Rhodes, Sting, Hulk Hogan, and Ricky ‘The Dragon’ Steamboat.

Being around for such a long time, the belt had its fair share of controversies surrounding it. The most famous of these was when Flair was fired by WCW’s Vice President, Jim Herd, and headed to the WWF in 1991. At the time, title-holders were required to pay a $25,000 deposit on the belt, which would be returned with interest when they lost it again. Herd, however, refused to give Flair his deposit back, which resulted in Flair taking the championship to WWF and declaring himself the ‘Real World’s Heavyweight Champion’. He later proved deserving of that title when he won the 1992 Royal Rumble to capture the WWF Championship. 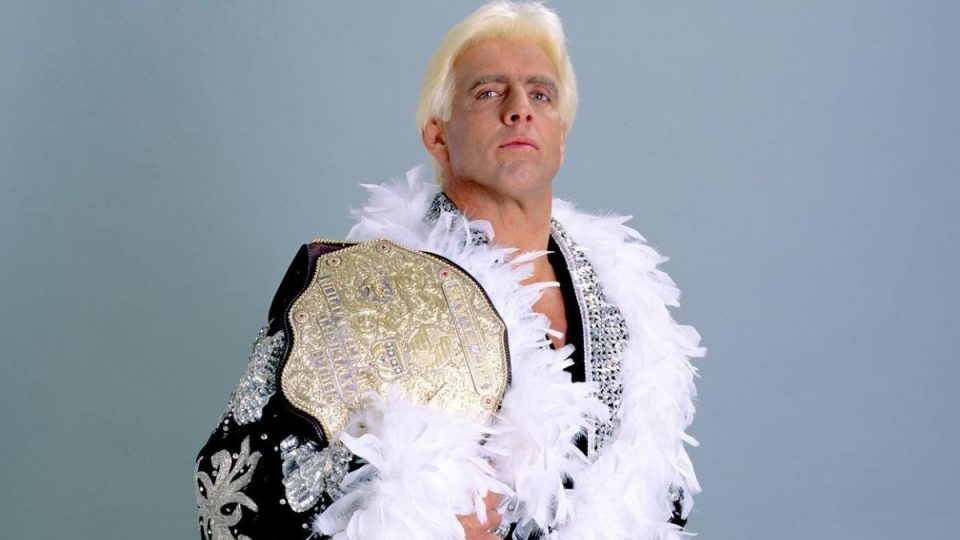 The belt had a short but memorable run as the WCW Championship while the ‘Invasion’ angle transpired on WWF TV in the latter half of 2001, pitting WCW and ECW stars against WWF stalwarts. During this time, Kurt Angle and The Rock were both able to add the title to their list of accomplishments. After the Invasion, WWF dropped the use of the WCW name from the belt and it was simply known as the World Heavyweight Championship until it was unified with the WWF Championship at Vengeance in December 2001, with Chris Jericho defeating ‘Stone Cold’ Steve Austin and The Rock on the same night to become the first Undisputed WWF Champion. Jericho would carry both belts until the following year’s WrestleMania X8, where Triple H defeated Jericho for the Undisputed Championship, he then introduced a new, single belt to replace the older versions.

A version of the ‘Big Gold’ would resurface later in 2002, this time with the WWE logo emblazoned at the top of the centre plate, it would be known as the World Heavyweight Championship until it was once again unified with the now WWE Championship when Randy Orton defeated John Cena at TLC 2013. Again, both belts were held by the champion to signify their status as the WWE World Heavyweight Champion, this lasted until August of 2014 when a new belt was unveiled to replace them, and the Big Gold was retired for the final time. 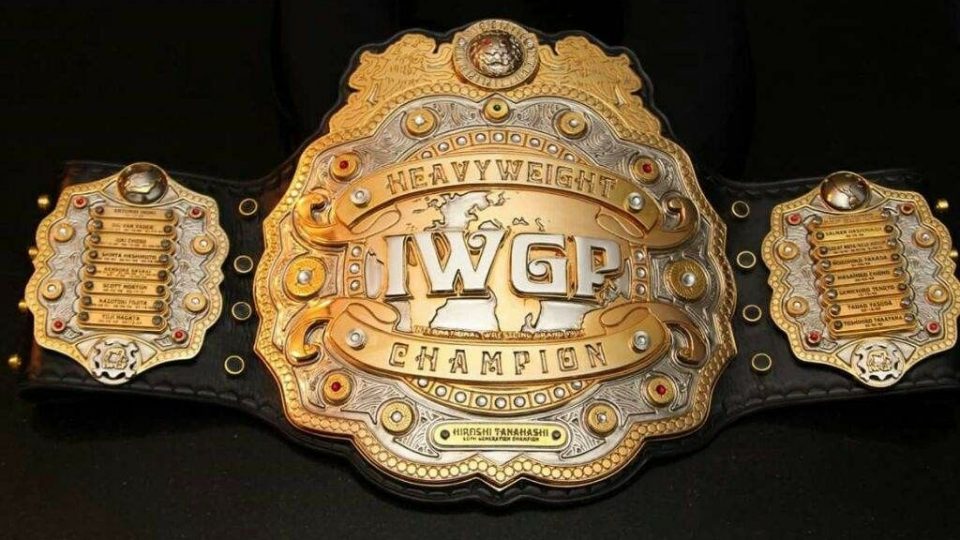 The fourth version of the New Japan Pro-Wrestling’s top prize, the IWGP Heavyweight Championship, was born out of a period of turmoil for the company. Brock Lesnar held the third version of the belt, but a contractual dispute led to him being stripped of the title. However, he held onto the actual belt, forcing NJPW to bring back the previous belt design to award to the victor of a tournament to fill the vacant spot at the top of the company, Hiroshi Tanahashi.

Eventually, NJPW Founder and former owner, Antonio Inoki, held the first event for his new company, the Inoki Genome Federation (IGF), with the main event being between Brock Lesnar and Kurt Angle for the belt Lesnar had refused to hand back. Angle won the bout and took the belt to TNA. Finally, the third and second versions of the championship were unified when Nakamura defeated Tanahashi and Angle on the same night at NJPW’s annual show at the Tokyo Dome on January 4th, 2008.

Nakamura was presented with the fourth version of the belt on March 30th that year, a physical representation of NJPW putting the chaos of the previous few years behind it, and marking the beginning of a new, far more successful, era for the company.

The belt itself was a beautiful piece of design work, with each element of the large centre plate being raised above the surface creating a very solid feel to the championship. This complements the ‘strong style’ of wrestling used by many of the men who have fought for it over the years. The company’s famous ‘Lion Mark’ logo stands proudly at the top of the plate, and the name of the current champion was found at the bottom. Those who were able to capture the title are immortalised on its side plates which features the names of each champion and the dates they won the belt. 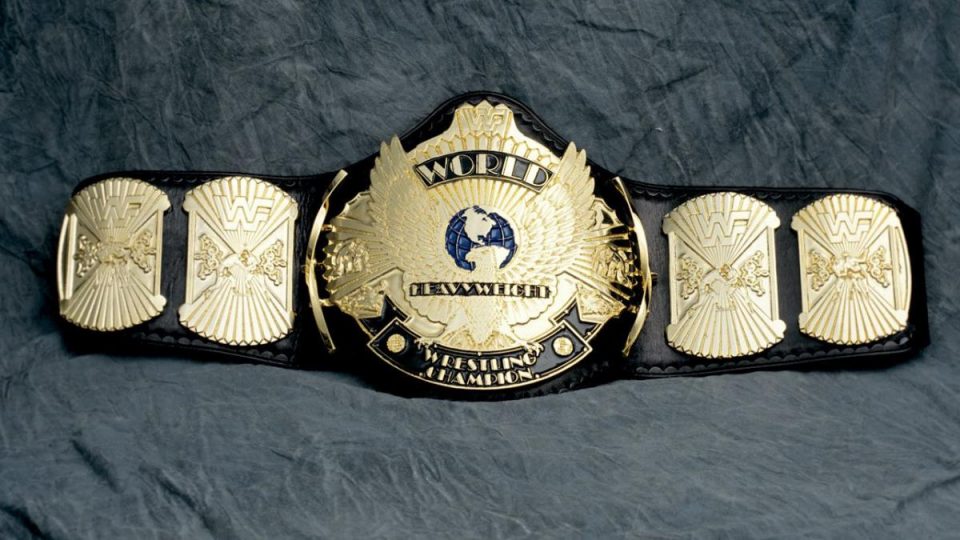 Widely regarded as the quintessential championship belt, the ‘Winged Eagle’ design was first presented to Hulk Hogan following his historic victory over Andre The Giant at WrestleMania III in 1988. It was a marked departure from the simpler designs of the WWF Championships of the past. The side plates no longer featured flags of the world or the names of former champions, instead opting to show wrestlers grappling in the ring and the WWF logo was proudly added to all four plates. The middle plate showed the eponymous eagle spreading its wings around the blue and gold globe in the centre, much like WWF itself had become the all-encompassing wrestling promotion of the time. The design had the gravitas to fit the words emblazoned on it, it was the World Heavyweight Wrestling Championship at that moment.

From the likes of Hogan, Randy Savage, Bret Hart and Ric Flair to Shawn Michaels and ‘Stone Cold’ Steve Austin, the men who held the belt over the following ten years were a who’s who of WWF’s evolution from the cartoonish days of the early nineties to the advent of the Attitude era at the end of the decade. Those champions helped elevate the belt to the most prestigious in the industry until it was finally retired on 30 March 1998 to make way for a design that also marked WWF’s wider transition to edgier and more adult content.