The “Divas Era” was a strange and frustrating period for women’s wrestling. Between 2008 and 2015, women’s wrestling in WWE was positioned somewhere between a grudging necessity and an afterthought, never really being the focus of any weekly output.

Yes, before Stephanie McMahon returned and single-handedly saved women’s wrestling in the summer of 2015 (or so the audience had been led to believe), the Divas division was almost entirely neglected. Anytime performers from this division appeared on television, it was painfully obvious that the writing team were going through a box-ticking exercise to ensure that they got their few minutes of weekly exposure.

Upon entering the famed “PG Era,” WWE was keen to show that they respected their female performers. They finally shied away from demeaning eye candy matches of the past and decided to put focus on real competition. With that in mind, however, it was extremely frustrating to witness just how apathetic they were to that particular cause.

The performers within the Divas division were rarely given much of a spotlight. The storylines were often nonsensical and ineffective, the pushes were painfully start-stop and their matches? You’d be hard-pressed to find a Divas match which lasted longer than five minutes on your standard episode of Raw or SmackDown.

Even Michelle McCool vs. Natalya at the Great American Bash 2008 – the match to literally crown the inaugural Divas champion – only lasted just over four minutes. The division was all but doomed from the start. Thankfully, there were more than enough diamonds that shined brightly despite these numerous issues. That’s not just the tacky sparkly rocks on the belt itself.

Although they were rarely, if ever, given the opportunity, there were numerous women who could thrive in today’s WWE. Rather than having to dumb-down their wrestling skills and ambitions to fit the creative direction, they would be free to fully extend themselves and become top-tier wrestlers, sharing main events with the likes of Becky Lynch, Bianca Belair and Charlotte Flair. 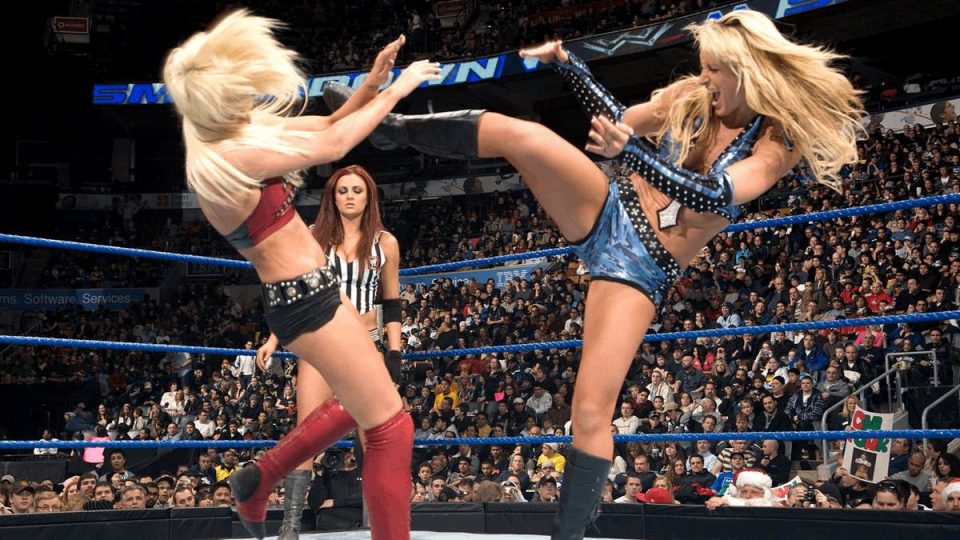 In an era famous for underappreciation, Michelle McCool was possibly one of the biggest victims of all. Whilst not always remembered perhaps as fondly as she deserves, it’s hard to miss the signs of “right wrestler, wrong era.”

McCool’s speedy development from her debut in 2004 to 2011 is nothing short of impressive. Starting as an act who needed a lot of work in the charisma department, Michelle benefitted from hours upon hours in front of live crowds, which propelled her to become one of the top heels in the company.

Her rise was vastly helped by her partnership with Layla: creatively titled “LayCool.” With Layla, McCool’s confidence quickly grew, to the point where she was rocking the microphone and eliciting legitimate heat from a live crowd. LayCool were one of the most entertaining acts in the seven-year history of the Divas era… but we’ll ignore the infamous “Piggy James” storyline. The less said about that, the better.

In-ring, Michelle McCool was head-and-shoulders above a lot of her colleagues. While she’ll never be featured in lists topped by the likes of Manami Toyota or Aja Kong, McCool’s efforts in-ring are possibly the most underappreciated aspect of her act.

Alas, it seems as though she will never get credit for a move-set which evolved constantly. What started with moves like generic running crossbodies and slaps, soon developed into an array of sit-out face-busters, brutal-looking heel hooks, and a much-talked-about tribute to AJ Styles’ Styles Clash. She was always innovating, always trying new things, but like many others in this era (as we’ll find out), she was mostly forgotten by the time the new era of women’s wrestling was ushered in. 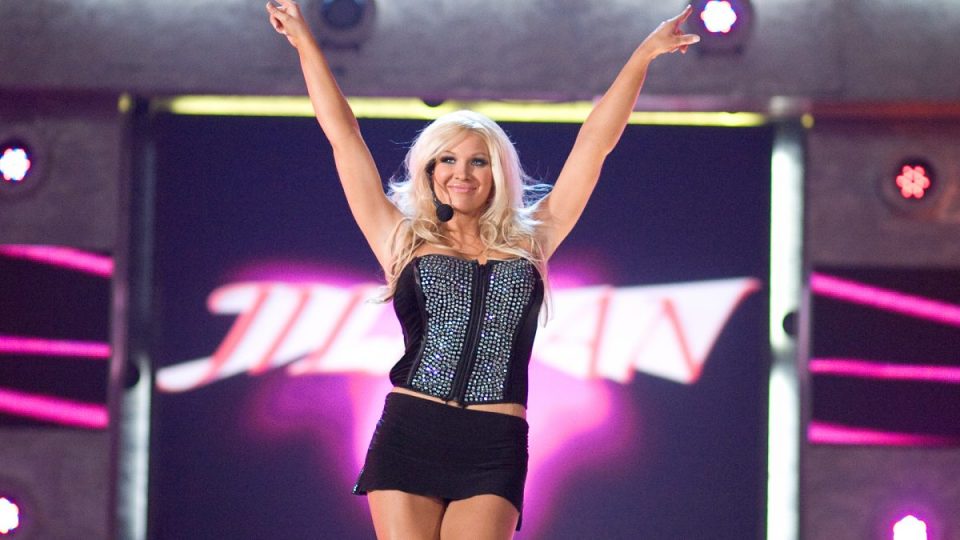 Poor, poor Jillian Hall. Looking back on things, she never really did get a fair shot, did she? With gimmicks ranging from “PR assistant with mole on face,” to “singer who can’t sing,” and even a heel turn caused by breast implants leaking into her brain (seriously), it’s a wonder Jillian Hall had any success at all.

But to her absolute credit, Hall took a tonne of lemons and squeezed them into a sea of lemonade. No matter what gimmick she was given, she gave it 100% and became one of the more memorable female performers of the era.

As a wrestling fan from a young age and somebody who was always solid in the ring, Jillian Hall would fit perfectly in the Women’s Division of today. With her willingness to make anything work, as well as being given a chance to have matches longer than five minutes on TV, the modern-day wrestling fan’s opinion would be flipped on Jillian Hall. These days, she might even be given a less-humiliating gimmick. Maybe.

At the very least, we can be happy that for all of her hard work, Jillian Hall was rewarded. She finally won the Divas Championship on October 12th, 2009. Nobody on the roster deserved it better, so it was nice to see her receive the respect she more than deserved.

Oh, right. Her title reign only lasted for five minutes. How apt. 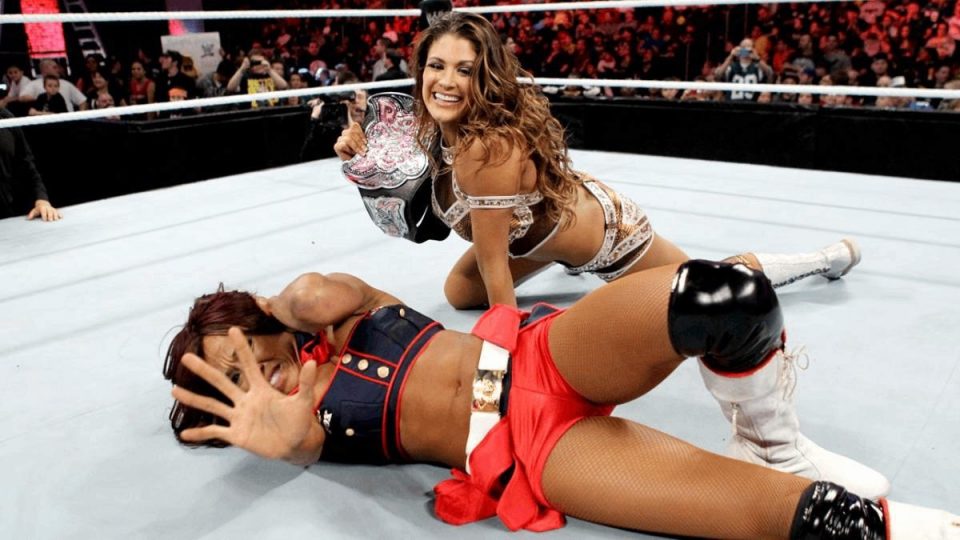 Before Ronda Rousey became the “go-to real-life badass” of the women’s division, there was Eve Torres.

Though it was rarely highlighted or talked about at the time, Eve Torres is certainly a woman who could handle herself both inside the ropes and out. Just ask Matt Hardy, whom Torres legitimately choked out in a bar in 2008.

Torres had a relatively short career in WWE, which was filled with highlights thanks to her natural charisma. Whether it was her blistering verbal assault on the Miz, shocking heel turn on Zack Ryder, or torment of poor Teddy Long, Eve Torres was always making headlines.

It’s bittersweet that she called it a day on wrestling just when she was reaching the top of her game. When she retired in 2013 her heel work was phenomenal, and had she stayed in the business for another couple of years, she likely would’ve been a shoo-in for a spot in the Hall of Fame. However, sometimes leaving at one’s peak is the best option, and she will certainly never be remembered for overstaying her welcome.

These days, Eve Torres is the co-creator of the Women Empowered program, which teaches women self-defence via the art of Jiu-Jitsu. Now that’s badass. And maybe, just maybe, that opens the door for a return to the squared circle somewhere down the line? 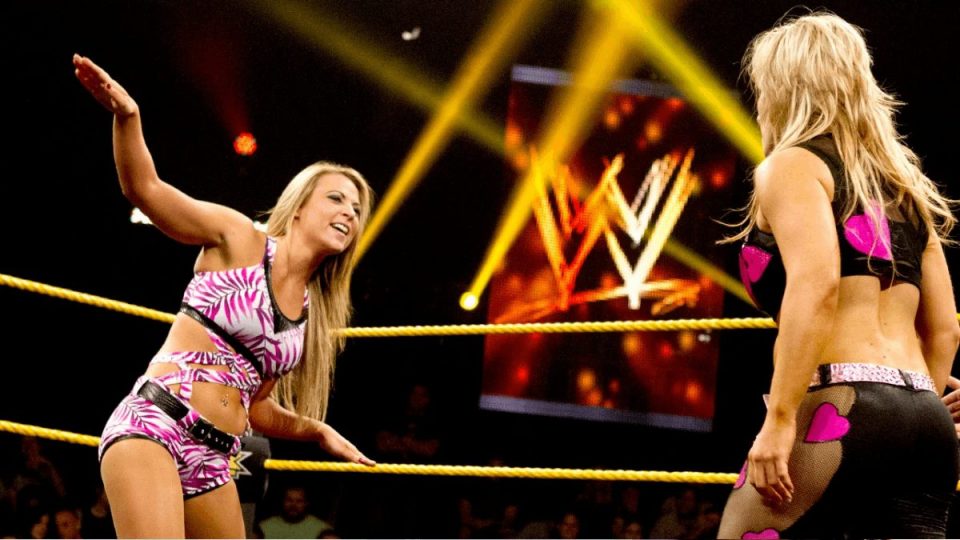 Without a doubt, the most well-rounded performer on this list. Emma had (and has – she’s still wrasslin’!) it all. The looks and charisma came naturally to her. The in-ring acumen was earned via several years of training with the highly-respected Lance Storm. It seemed like Emma was a can’t-miss opportunity for WWE… but for whatever reason, it just didn’t come together.

Emma first showed her potential in NXT. Much like the aforementioned Jillian Hall, Emma was given a goofy gimmick, but she made the most of it. For Emma, the gimmick was along the lines of “bubbly babyface who does a silly dance,” where she would quickly get the fans on her side and become a popular part of the roster.

Let’s not forget that the star reached the final of a tournament to crown the first-ever NXT Women’s Champion in 2013 where she lost to Paige. (Saraya) It could be argued that this match, and that championship helped pave the way for the revolution that followed.

When she came to the main roster, it was more of the same character-wise, but she was afflicted by the same curse that so many NXT-to-main roster converts suffered. Despite her undeniable popularity on the black and gold brand, WWE’s writers initially saw her as nothing more than a comedy character, packaging her with Santino Marella before shipping her right back to NXT.

And of course, who can forget her bizarre “Emmalina” run? This was perhaps one of the most confusing angles of the last decade. To put it into modern terms, “the Makeover of Emmalina” was essentially 2016’s version of “Veer is coming.” Video packages were played hyping up Emma’s character revamp for weeks, for months, resulting in what might be the worst pay-off in wrestling history. One to be forgotten, for sure.

Recently, Emma (now known as Tenille Dashwood) has been tearing it up in the similarly underappreciated IMPACT Wrestling. With WWE’s creative overhaul, it wouldn’t be a surprise if she wasn’t fielding calls for a comeback sometime soon. 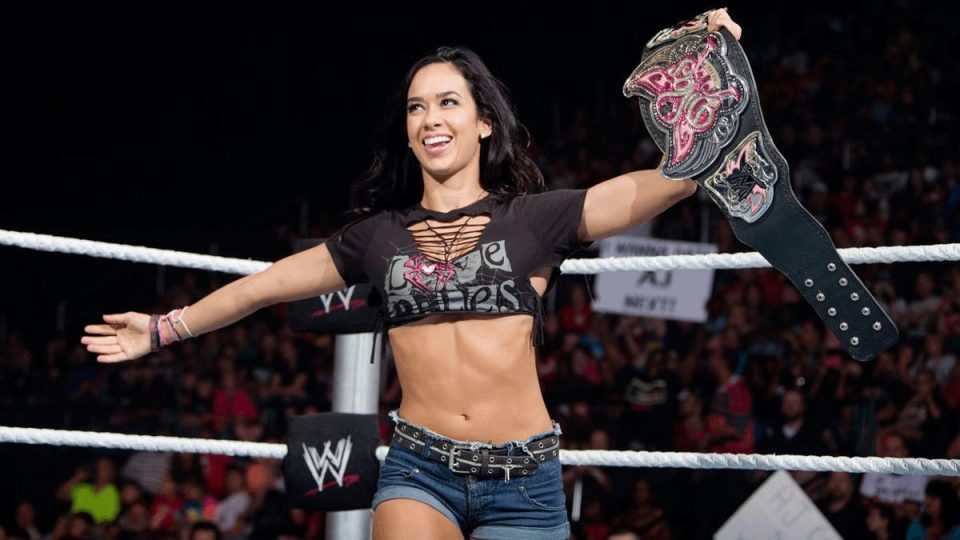 Let’s be honest, AJ Lee was probably the performer you had in mind when reading this article. No list of women from the “Divas Era” would be complete without AJ Lee, right?

AJ Lee is a rare example of a woman with serious highlights during this era. She was part of an on-screen romance with Daniel Bryan which famously led to Bryan losing the World Championship in 18 seconds at Wrestlemania 28. She became the General Manager of Monday Night Raw in 2012. She was also part of one of the more memorable storylines of the Divas era with Kaitlyn (someone who absolutely deserves an honourable mention on this list).

Being one of the best promos of this era, male or female, was also a huge feather in AJ Lee’s cap. Her scathing promo on the Total Divas crew (affectionately dubbed the “Pipebombshell”) was filled with enough rage, bitterness and superiority to successfully blur the lines between sports entertainment and reality.

Although she still has her critics. However, with a better calibre of opponent to tell an in-ring story with in 2022, those critics would be silenced. Going head-to-head with talents like Asuka, Bayley and others, she would have plenty of opportunity to prove just how good she can be inside the squared circle.

And hey, at only 35 years old, with seven years to heal from the wear and tear of professional wrestling, she still could.

Several other names could make this list. Some have even been mentioned among the other entries. This paints a story of a division which could have become very fondly remembered with just a little bit of attention and yes, a lot more TV time.

If there was any division in wrestling “making the most of what it was given,” it was the Divas division. Despite being given short matches on TV, many of these women made every minute count.