Towards the end of the first decade of the 21st Century, WWE Monday Night Raw came up with an ingenious idea to help boost the ratings…

Well, it started as a weekly guest host, until becoming just a weekly guest, and then a guest now and again until the idea eventually fizzled out.

Looking back at this time may bring you back to a place of nostalgic cringe. Either the guest was just there to promote whatever project they had out at the time and clearly didn’t care about wrestling, like Jeremy Piven infamously giving SummerSlam the new name “SummerFest,” or they were a fan and were just let down by bad segments like poor old Will Sasso doing an incredible impression of Curly from the Three Stooges doing an incredible impression of Hulk Hogan, which was met with an incredible lack of response from the crowd.

However, it wasn’t all cheap plugs and bad promos. Sometimes the celebrity guest would be rather entertaining, and it is those select few we are here to celebrate today. 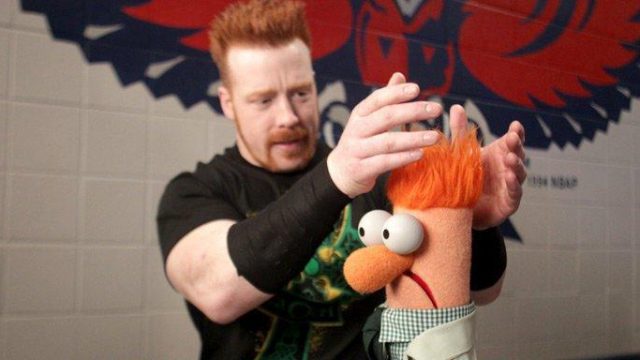 It’s time to start the music, it’s time to light the lights for the first entry on our list, The Muppets.

Having been recently acquired by Disney, The Muppets were set to make their comeback to the big screen. To help promote their new movie, they stopped by on the 2011 Halloween edition of Raw.

At that point, with over 30 years of interacting with celebrity guests, The Muppets blended with the WWE locker room quite well. Vickie Guerrero got into an EXCUSE ME push off with Miss Piggy, Jack Swagger and Dolph Ziggler did their best Stu Hart impression by stretching Gonzo into a pretzel, and Statler and Waldorf jeered the shenanigans from up in the nosebleeds, just like your typical modern-day wrestling fan.

The highlight, however, was Sheamus defending bumbling laboratory assistant Beaker from Christian. After Captain Charisma cleared off it was revealed that not only could Sheamus understand Beaker’s mumbles, but they were related! A quick adjustment to each others trademark spikey hair brought the segment to a close, as well as this list entry. 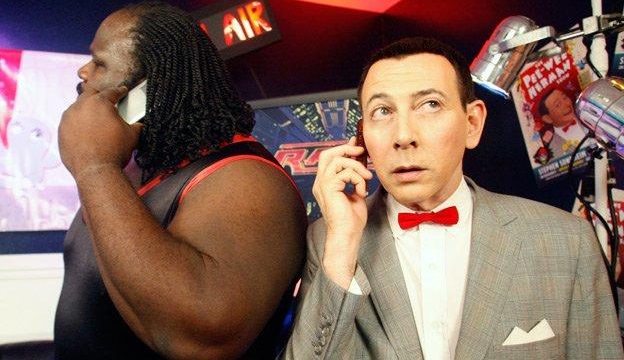 In 2010 Paul Reubens was set to bring back his beloved character Pee-Wee Herman with a new Broadway stage show, and the character made an appearance on the November 1st edition of Raw to help sell some tickets.

Admittedly the first segment wasn’t all that funny. A bit of telephone schtick with Mark Henry and a game of Twister with the divas didn’t raise that much of a titter.

The (silly) business picked up as soon as Pee-Wee was out in his element, in front of a live audience. Declaring that the shows secret word was ring, Herman was interrupted by an irate Miz.

Not having a clue why everyone going crazy every time he asked Pee-Wee to get out of his RING (WAAAAAAAAAARRRRRGGGGHHHHH!) Miz played the perfect straight man to Herman’s childish antics, which included classics such as “I know you are but what am I?” and the immortal sentence “DO NOT ANGER THE PEE!”

Reubens’ appearance was so successful it earned him a Slammy award and a guest segment alongside The Rock at the following year’s WrestleMania. 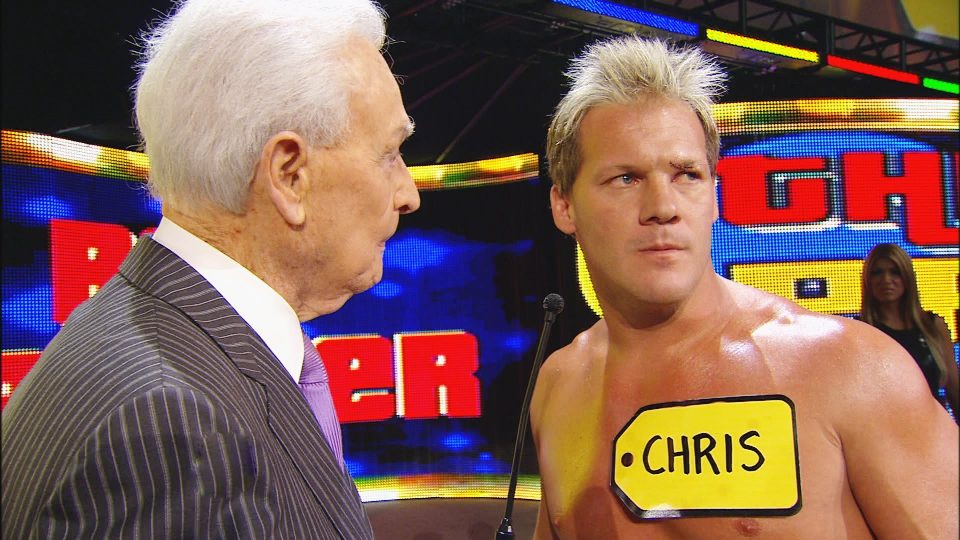 The host of The Price Is Right may not be well known by the rest of the world, but over in America, he is a national treasure. This was confirmed by the humongous pop he got when he made his entrance and opened up the September 7th 2009 episode of Raw.

Barker certainly put the work in that night, especially considering how at the time he was 85. He had a bit of wheel-spinning fun with DX, sat down to promote his new book with Josh Mathews and took out Chavo Guerrero with a swift punch to the guts and chop to the back of the neck. Seriously.

But the moment we will all remember is The Price Is Raw segment that opened up the show. At one point Chris Jericho got up in Bob’s face and the two started to exchange unpleasantries.

What was amazing was the chemistry the two had. Both played it completely straight which helped amp up the comedy. Because of this, the otherwise lacklustre punch line of Y2J accidentally making the bid of only one dollar is now replayed as a classic moment at every Raw anniversary. 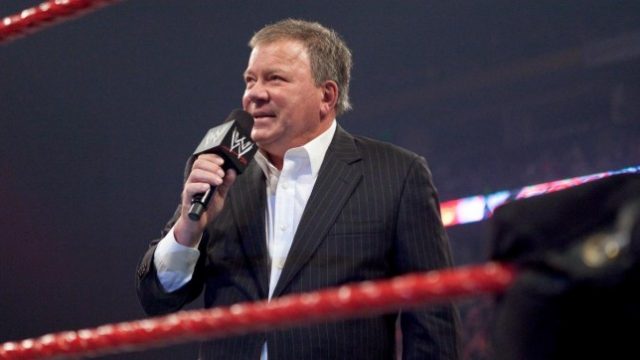 William Shatner is no stranger when it comes to WWE Guest appearances. Back in the mid ’90s Shatner took Bret Hart’s side while the Excellence of Execution was feuding with Jerry Lawler, with Shatner even taking out the King with a judo flip across the ring (The secret word! WAAAAAAARRRRGGGHHH!)

So it was quite sweet to see Jerry introduce Shatner who in turn introduced The Hitman for the final segment of the February 1st 2010 episode of Raw.

That’s not to say William didn’t make his presence known before the big finale. As well as negotiating a triple threat tag match between The Straight Edge Society, ShoMiz and DX, he treated us all to a special concert.

Always a professional, Shatner makes appearances on WWE TV to this day, most recently being inducted into the 2021 Hall Of Fame. 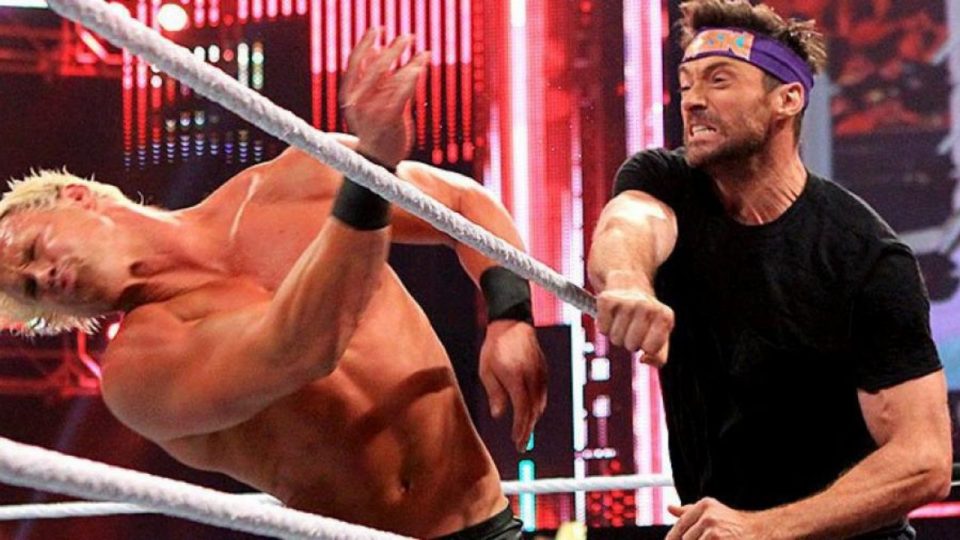 Hugh Jackman is truly a showman. Some say the greatest. The man can sing, dance, and act. A true triple threat and one of the last of the old school Hollywood stars.

There to promote his rock ‘em sock ‘em fighting robot film Real Steel, Jackman brought his sheer charismatic presence full force into the arena on the 19th of September 2011.

Jackman knew how to work the audience both off and on the mic. He spoke to Vickie Guerrero and Dolph Zigler knowing when to play it straight, when to pause, and when to showboat to the crowd. This led to an episode-long story arc where Hugh would pick an underdog, one Zack Ryder, to face Ziggler later on in the show.

While at ringside Jackman remained fully invested, cheering on Ryder and keeping the audience stocked. It all ended with him landing walloping Wolverine punch to the face of Dolph Ziggler, which was not a work. At Ziggler’s request obviously, he didn’t just pull a stiff shot on Dolph for the sake of it.

Jackman would return for another appearance in 2014 and another memorable segment with “Magneto” Damian Sandow.