Okay, well that might not be true. If you’re planning on going to your local nightclub with a pair of sun blockers on your face then good for you, but please realise that if you do you’ll probably look less like Jack Nicholson and more like the creepy villainous record producer from a made for VH1 movie biopic.

However, in the world of wrestling sunglasses can help create some iconic imagery. Ric Flair boasting about how he spent more money on spilt liquor than you made, or The Rock raising an eyebrow at your candy ass over a pair of gold rims truly help amplify character work, be you a cocky heel, a laid back hero, or just someone who is really, really cool.

Today we are looking at five pro wrestlers who have used a pair of fashionable frames to great effect. In some cases, they may even be the secret ingredient needed to push a gimmick over the edge into superstardom. 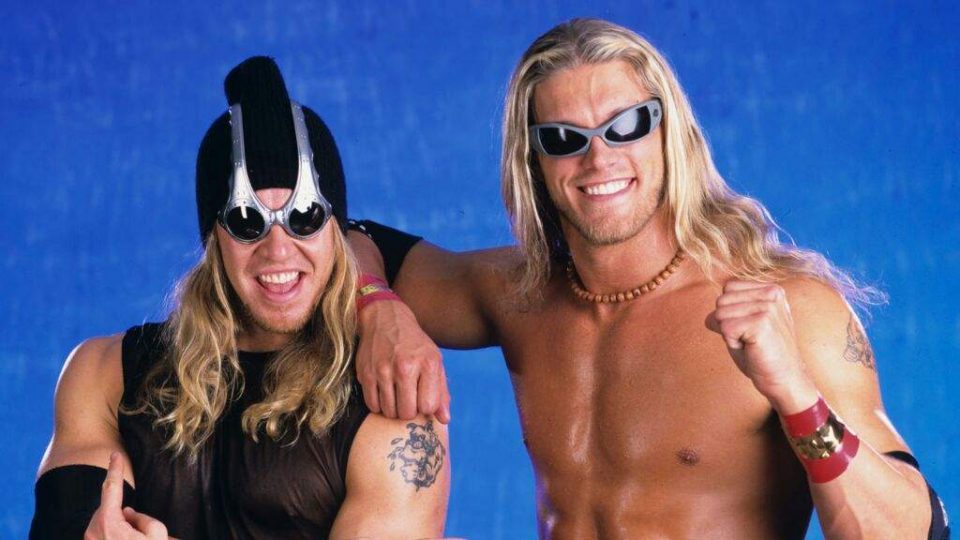 Edge and Christian have worn sunglasses ever since their Brood days. I guess vampires don’t like the sun so it kind of makes sense, just ask Blade.

But it wasn’t until the second half of the Attitude era when E&C became part of the legendary triangle feud with The Hardyz and The Dudley Boyz did their sunny game really take off.

With their five-second poses and bodacious surfer like catchphrases such as “totally reeks of awesomeness,” the two were arrogant, goofy, and punchable, and nothing says arrogant, goofy and punchable like pair of naff face frames. Christian in particular took it to an entirely new level.

The most famously bad ones have to head to the silver number that wrapped around the top of his head. Add a beanie hat for them to go over and boom, instant heel heat.

Especially in one instance, when Christian echoed a fellow Canadian wrestlers gimmick of putting sunglasses on a kid in the front row (more on that later) deciding they didn’t look good, then instantly taking them back off. It’s one of the biggest dick moves that MJF would be proud of.

Scott Taylor and Brian Christopher didn’t create too much of a splash when respectively joining the WWE in 1997. In March of ’98, the two formed a tag team called Too Much, later to be renamed Too Cool.

It took a year or so for the duo to evolve into Grandmaster Sexay and Scotty Too Hotty, incorporating a hip-hop theme into the act. However, it wasn’t until the addition of the 400ib big-bottomed behemoth Rikishi did the faction really take off.

It may be hard to remember how over Too Cool were with all the brilliant tag teams around at that time, but listening to the pop at the 2000 Royal Rumble when the trio paused for a dance break in the middle of the multi-man main event should be a good indicator.

So why did the Too Cool dance gimmick succeed where so many failed? Because there was a ceremony involved in the groovy antics.

Unlike their gyrating contemporaries such as Alex Wright or Disco Inferno, who would just start thrusting their hips with little or no fanfare, after a victory, Sexay and Scotty would whip out a pair of yellow framed sunglasses before placing them on the big ‘Kish, and/or whoever there guest dance partner was that evening, The would then smash out their moves to the admiration of the crowd.

The first pop would be the reveal of the sunglasses. The next would be the placement on the dance partner’s face, the more nonchalant the better, then finally the sheer joy of seeing a group of guys who can’t dance very well shake their moneymakers regardless would be enough to send any crowd home happy.

One of the things that made Orange Cassidy stand out on the indie circuit was his instantly iconic look. His non-fussed, laid back, sloth-like demeanour was perfectly captured with his ring attire of casual jeans and sunglasses which he refuses to take off before the match.

Inspired by Ryan Gosling’s character in the 2011 movie Drive, Cassidy was always a good wrestler, but his gimmick tended to work best with more comedic, kayfabe breaking matches. The kind that would make Jim Cornette kick a cat at a grandmother in rage.

When he was added to the AEW roster Cassidy’s character became slightly more grounded in reality but kept the essence of what made him cool, sunglasses and all.

His deadpan face alone is all that is needed to adorn a best selling t-shirt, and the double denim, aviator dress up is easy enough to do to ensure there will always be at least one fan decked out like their hero on most episodes of Dynamite or Rampage.

All Orange Cassidy has to do to get a reaction is just stand there in his sunglasses. Literally. Maybe a lazy thumbs up if you really want to blow the roof off the place. Getting over has never seemed so effortless.

Randy Savage’s headwear changed quite a bit throughout his career. From bandannas and headbands to cowboy hats and crowns to the nwo black and white. One constant that remained was his trademark beard and a nice big pair of oversized sunglasses.

What may have looked ridiculous on other wrestlers perfectly suited the Macho Man’s over the top antics. It was almost as if they were there to restrain the madness that was hidden within, always fighting to get out of the wild man be it through promos or in-ring action.

When Randy would cut a serious or emotional interview, like the one he did on Jake The Snake for daring to place his reptilian hands on Randy’s beloved Miss Elizabeth, the removal of the glasses actually added great dramatic effect as the viewers could see fire burn in his eyes.

As the years progressed so would Randy’s eye-catching eyewear. Starting as a simple sport like single lenses and evolving into neon painted masterpieces,

black and white shark teeth, red and yellow slim-jim sellers and everything in between, there will always be a pair of Randy Savage sunnies to match whatever mood you are in.

The New Generation era may not be too fondly remembered by wrestling fans, but one of the highlights was the rise of Bret Hart to his rightful place as the face of the company.

Bret may have not reached the heights of Hogan or Austin, but even though he didn’t cross over quite as well to mainstream audiences, we wrestling fans can appreciate how brilliant he was.

A complete natural at in-ring storytelling, Bret’s subtitle mannerism and quiet charisma made him one cool dude, and nothing says cool dude like a pair of wrap-around sunglasses. At least in the early ‘90s anyway.

Of course, as well as making him look utterly awesome, the sunglasses played a huge part in Hart’s babyface shtick, gifting them to one lucky young fan at ringside before his matches.

Who could forget the epic promotional advert when a child calls out to Bret down a hallway, and the camera zooms in to a close up of The Hitman turning back around. He then walks back and gives the starry-eyed lad his trademark attire.

You can pick up your own pair of Hitman Shades from Bret’s website, and for an extra $20 you can even get them signed. Or you can just hope you see him walking down a hallway someday and shout his name. That seems to work too.